The Elide Fire Ball: A Passive Alternative to Fire Extinguishers

I once got sprayed with a fire extinguisher at a bar, my reward for trying to defuse an argument between two hotheads. That's the extent of my experience with fire extinguishers, though I've often wondered: Would I have the wherewithal to put out a fire with one?

It's not clear where they get these statistics from, but a German company called Elide claims that "90% of ordinary people cannot use fire-extinguishing equipment when they are facing a real fire." Thus they've invented a passive firefighting device, called the Elide Fire Ball, that works like this:

What you can't hear in the video is that once the ball has been exposed to open flame for three to eight seconds, it emits a loud warning noise before exploding. It's filled with an undefined "extinguishing powder" that will snuff out fires within an eight- to ten-square-meter radius.

The company reckons that by simply mounting the ball in a fire-prone area, like near a stove or that creepy candle shrine you built in your bedroom to practice yoga in the middle of to get in touch with your feelings after your last bad breakup, it will take care of fires on its own. And the ball is false-alarm-proof, as it will only activate when exposed to fire. (If I had been hit with one of these at the bar, I wouldn't have had to go home and change my clothes.) 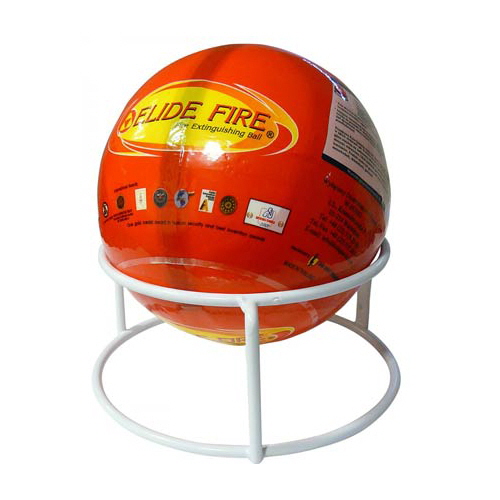 Still, I know what you're thinking: They're mostly throwing the ball in the video. What if the would-be fire-putter-outer doesn't have good aim? What if you have to, say, put out a fire in Oklahoma City that's ten feet up, maybe 32 feet away and you're being guarded by Andre Roberson with mere seconds left on the clock? The answer is obvious. You simply arrange to have Steph Curry on hand at all times.

The Elide Fire Ball: A Passive Alternative to Fire Extinguishers