Like any of these species of conference, the sheer volume of provocative ideas (in this case "Dangerous" ones as well) assaulting your brain is enough to knock you down into the isle. It was a grueling first day at Pop!Tech, with great speakers, untouchable musicians, and a fun lunch to break things in half.

The day began with presentations from Brian Eno and Master Sim Will Wright, both talking about emergence and complexity derived from simple principles, objects, and code. (As an aside, Eno postulated that the reason why Silicon Valley has spawned so much creativity is because all those creative folks went to the Exploratorium when they were young! For sure true.) Wright dazzled with his Spore demo--the audience ooing, awhing, and positively gasping at some of the high points. Jason Moran, a jazz pianist, suffered gallantly through some technical difficulties but dazzled the crowd with virtuoso chops, ending with a ballad that was probably the prettiest thing I've ever heard in my life.

Next up was Kevin Kelly, who posited the notion of the "The One Computer," aggregating the specs of all the internet's computers as one...complete with a fake Amazon sales page. The specs are impressive: 1 billion PC chips on the internet; 1 million emails per second; 1million IM messages per second; 8 terrabytes per second traffic; 65 billion phone calls per year; 20 exabytes magnetic storage; 1 million voice queries per hour; 2 billion location nodes activated; 600 billion RFID tags in use.

Marianne Weems, Artistic Director of the Builders Association, questioned the lack of technology in the theatre (you know what I mean), both as props and as content, and showed clips of some poignant and hysterical productions. This is the stuff BAM was made of. Hasan Elahi, an interdisciplinary artist detained at the Detroit airport shortly after 9/11, has decided to document his entire life online--complete with ankle transponder tracking, photos of every meal he's eaten, credit card charges, toilets he's used--you get the idea. Turning the tables on the man (or the B.Brother), he aims to devalue their currency (secrecy) by flooding the market with his own personal data. Frightening; inspiring.

After a much-needed break, the afternoon began with a surprise performance by the incomparable Rodrigo y Gabriela, thrilling the crowd with intense, percussive guitar playing that absolutely rocked the house. Tom Friedman took to the stage with a lecture on how "this is not your parents' energy crisis": We are funding both sides of the war on terrorism; The world is flat; Clean power is going to be the growth industry of the 21st century; the price of oil and the pace of freedom operate in an inverse relationship; Google and Yahoo's rise are akin to China and India--they need fuel. Next up was Stuart Brand, who argued that the environmental movement will keep expanding, and will deepen to a civilization-saver. Lester Brown showed hope, maintaining that "we can make the change; we've done it before," but not before taking the audience through a fascinating discussion of how the move to ethanol could create a vexing competition between car people and low-income people for the same commodity: food.

Robert Freling inspired with his Solar Electric Light Fund, and Pratt's incubator, using huge physical and virtual cubes to help visualize cubic feet of CO2, prepared a wonderful exploration of the actual carbon footprint that this year's Pop!Tech attendees are inflictiong on the environment. (Pop!Tech will invest double to offset the emissions, sponsoring solar power projects by the Solar Electric Light Fund.) Bruce Sterling broke down some techspeak, beginning with the observation that "we need a new word for neologism." Nice. Blaine Brownell set up a show-and-tell of new materials--some ID stuff but a lot from/for architecture--and Alex Steffen wrapped up the day with an impressive, impassioned plea to do better, backing it up with rigorous examples of who and how we are doing better. A very good finish.

After a dinner break, it was off to the bar for 3-minute open mic presentations, which varied wildly from videos and product pitches to a short teaser on the history of computer start-up sounds. And speaking of start-up sounds, it's definitely time to get some sleep now.

Tomorrow should be a cinch, right? 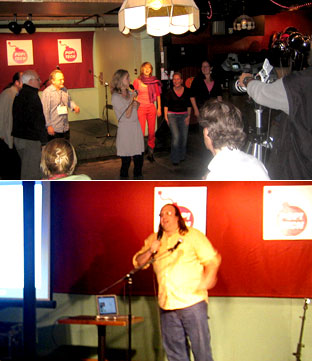