A Little Help for the Open Office

Anyone who has worked in an open office knows the distractions that can come with it, especially in the unwanted-noise department. Between endless coworker conversations and the maddening jangle of keys in someone’s pocket, somewhere, an open space meant to encourage collaboration and cross-pollination can end up doing more harm than good. And most acoustic panel–type solutions end up recreating the cubicle effect that offices were trying to avoid in the first place. Which is why we’re excited to see the Tokyo-based designer Jin Kuramoto’s new series of modular room dividers, called Wind.

Taking inspiration from the randomness of plant growth found in nature, Wind’s varying forms that can be freely arranged within a space to help control acoustics and privacy. It’s not the first time that Kuramoto has tried to channel natural forms into interior products; previously, he designed Sprinkle, a wall hook inspired by the spread of ivy, and Rock / vase, a modular faceted planter resembling cut gemstones. “I believe the randomness [of nature] makes people more comfortable,” Kuramoto says. “I want to instill that feeling in other spaces.” For Wind, the designer looked at the ways trees and flowers sprout up in a forest or a field to develop the petal-like dividers, which comes in five unique shapes that fit together as a cohesive whole. 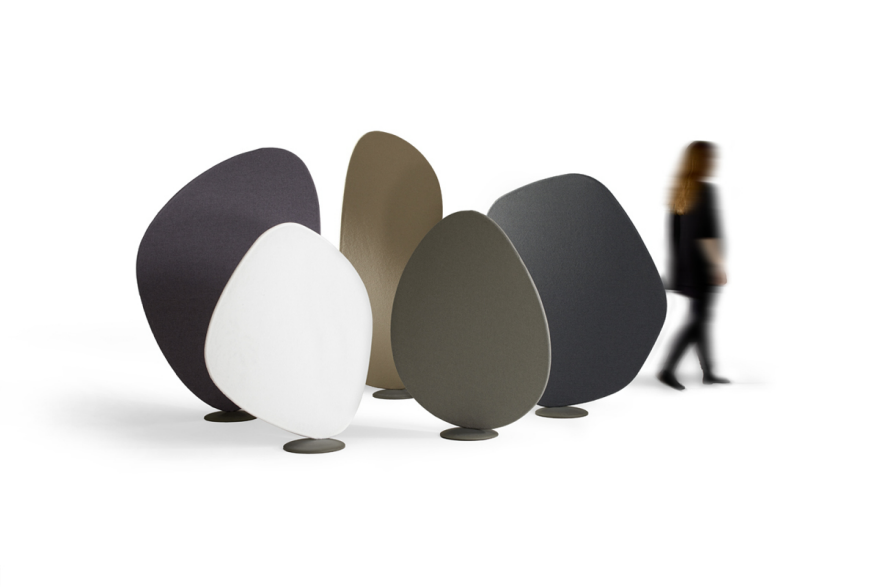 With an initial concept in mind, Kuramoto set about building paper models of these forms, which he then used to pitch the idea to the Swedish furniture company Offecct in 2014. Offecct signed off on the concept, giving Kuramoto the support he needed to realize the product, quickly moving from hand drawings to full-size cardboard mock-ups.

Creating all manner of sizes and forms, Kuramoto looked at the way these test partitions felt in relation to each other, as well as in an open space. The designer also tested what it was like to move and arrange these objects, knowing that the final users would need a high degree of adjustability. From these tests, five shapes were ultimately chosen for the collection. 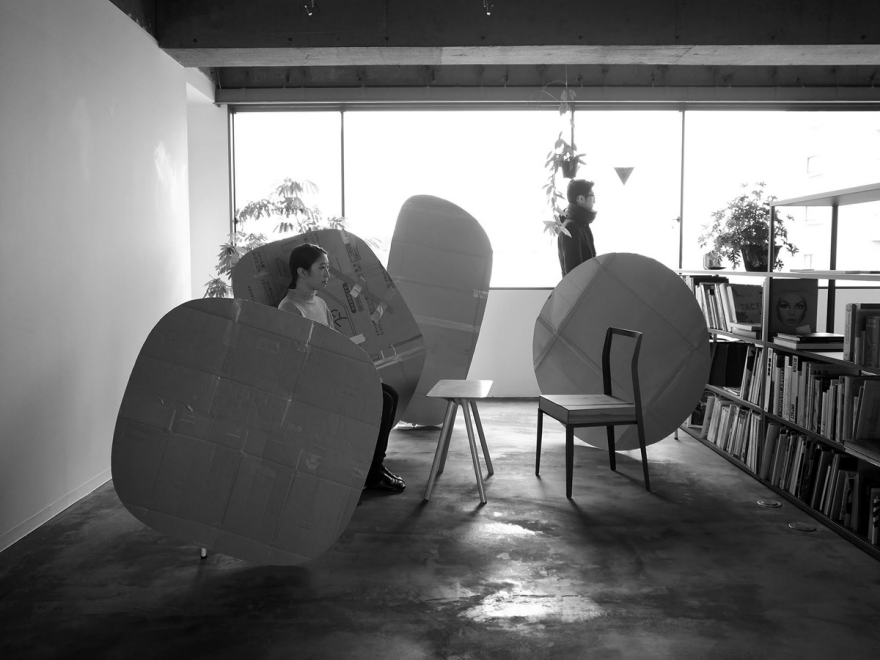 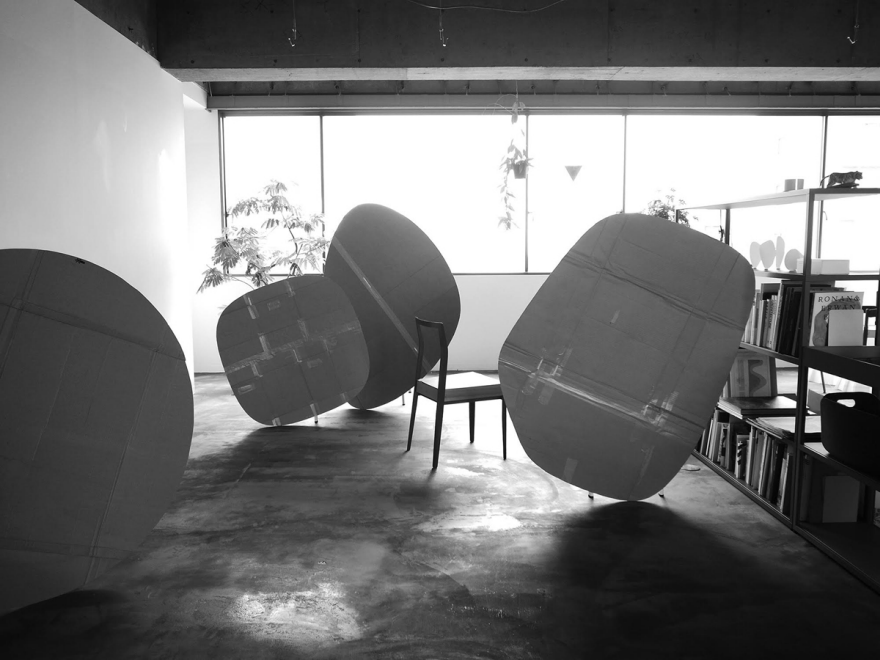 “Almost all of my work is developed by struggling with materials,” Kuramoto says. “‘Think by hand’ is the most important policy of my studio, to find the character of each material and the most beautiful aspect of the materials.”

After determining the five shapes, Kuramoto turned his attention to upholstery materials, trying out numerous swatches to find options that would look good while absorbing chaotic chatter and noise. Alongside Kuramoto’s efforts, the Offecct team performed its own rigorous testing. “The screens were put through research and performance tests elaborately by an engineering team at Offecct,” Kuramoto says. “They had to test many styles of fabric material with various layers. Finally, they found the most appropriate materials for acoustic function.” 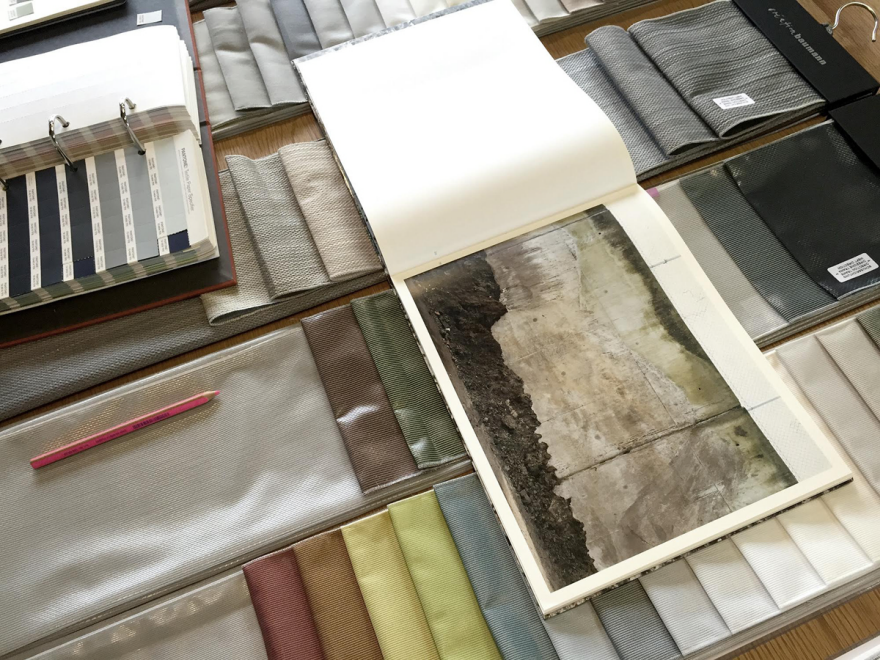 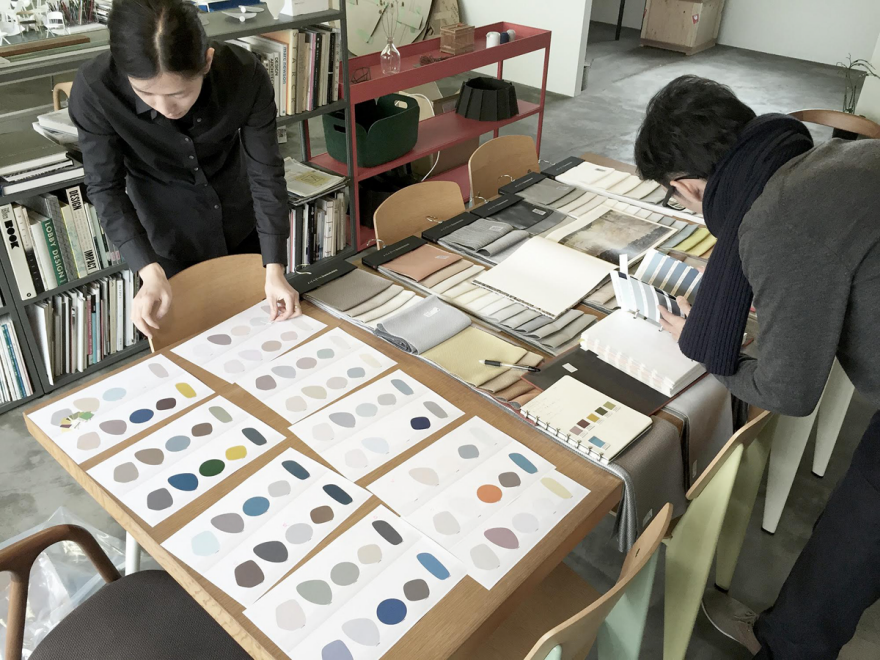 In addition to its acoustic integrity, the fabric needed to fit around the metal pipes that make up Wind’s underlying structure, and be durable enough for commercial use. “These materials were selected very carefully through a lot of discussion with Offecct product development team,” Kuramoto says. “They had a super nice skill and huge knowledge about materials.” Finally, each screen is anchored by a molded concrete base, sized for the right balance of sturdiness and portability.

“Almost all of my work is developed by struggling with materials. ‘Think by hand’ is the most important policy of my studio.”

For the color palette, Kuramoto once again looked to nature, as well as the everyday built environment: “I’ve chosen these colors from the daily environment, like the soil, sky and water, the stain on the wall and the asphalt color of the road,” he says. 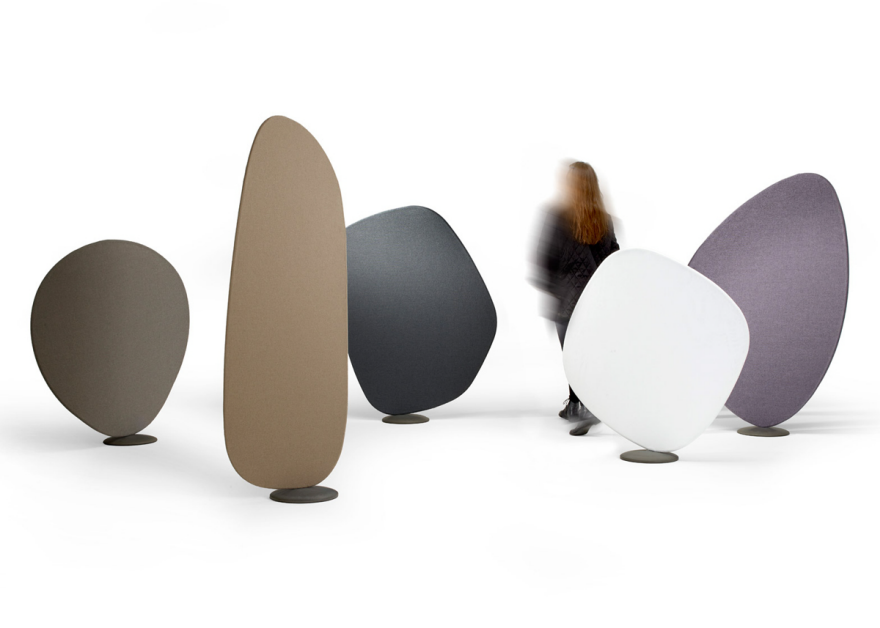 Once Kuramoto arrived at a combination of forms and materials he was pleased with, the designs were handed off to Offecct’s engineering team, which worked to translate them into scalable manufacturing processes. After the team converted Kuramoto’s designs into 3D drawings, they used a computer-controlled pipe bending machine (likely something like the TUBOTRON 120—do yourself a favor and listen to this with the audio on) to create the organic forms.

Wind made its debut at the Stockholm Furniture Fair last month. Described by the designer as “more concept than individual products,” it’s unclear if the system will be available for purchase anytime soon.

A Little Help for the Open Office