An Icon slowly dissolves in a world of interaction it originally defined.

With hotly anticipated entries like the virtual reality Oculus Rift headset dropping for consumers at the end of this month, and Microsoft's Hololens augmented reality hardware available to developers around the same time, this spring makes for as clear of a starting line as we've seen in the race for imaginary-space.

Google's effort in this field is the C77DA Winning Google Cardboard, which has already made gains with real world audiences through a mix of affordable headsets which utilize mobile phones as the display screen and now-available apps. The recent news of note in their ecosystem, other than the Happy Meal headset (!!!), is the launch of the View-Master Viewer DLX, an upgraded version of the VR View-Master toy which Mattel announced last year.

The new View-Master has an appealing story: it is a seemingly natural evolution of an iconic toy, realizing both in technology and form the futurism of the era of its inception, all while maintaining its nostalgic color palette and basic interaction model. It has emerged, however well considered, in the shadow of the original View-Master, a toy, possibly the only toy, which sits in the pantheon of singular product experiences. Its layers of sensorial and cognitive enjoyment are revelatory and profound. That may sound grandiose but at one point, this single product enterprise had 65% of the global population recognizing its brand. So though it really is unfair, let's measure up the descendant by breaking down the progenitor...

The View-Master's defining experiential components are (in our humble opinion, please hit the comment section with your own):

Physical
- The action and sound of the lever pull
- The manipulation, insertion, movement and errors of the disc
- The orientation of it to oneself and tilting to use it

Metaphysical
- The disc's physical harmony with classical children's narratives: progression, being finite, looping
- The exciting dialectic and dependency of coded artifact and deciphering tool
- The play between the simulation of and abstraction of reality

Of these the new View-Master preserves only the last of each list. Is that enough to give it the cultural significance of its forebear? Already there is a quite similar set of real-world physical ticks marking our use of VR; principally moving us as we move it, but also cocooning and masking us. And yes, as was the case with the diorama-aesthetic that grew to define the View-Master disc as a medium, there is a widely recognizable set of visual tropes in our electronic virtual worlds—the character glitches, connection-error stuttering of action or uncanny valley strangeness. But neither of these clusters of pop-culture reference material are unique to the View Master or to Google Cardboard, they apply to our experience of virtual and augmented reality as a whole. If there is a significance to be found that is specific to the new View-Masters, it is that the brand's history and the disc models' wide use has made them a very natural, and accessible, bridge between VR and consumers at an important time. 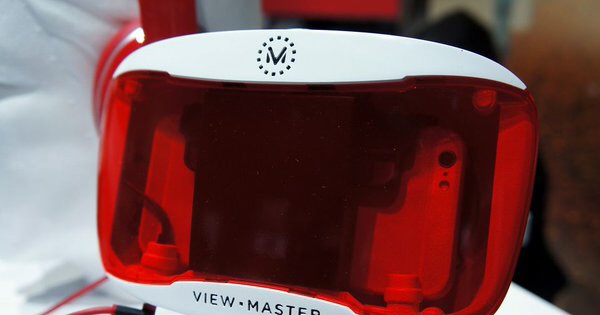 Legacy is certainly harnessed to that end; the product design of the DLX continues to develop the retro aspects of the first VR version, the chief one, the red plastic, has moved to the face of the unit and turned translucent. The vestigial lever continues a slow morph to a button. The overall finish level can be expected to be as smooth and flawless as one would expect of a mass-produced artifact. That clean machine-tooled look and sealed construction was always a part of the object, but receded far behind the above mentioned attributes. Without the experiential foundation the View-Master Viewer DLX is reduced to a styling exercise for something which is essentially just a handle for your phone — a haptic theme. 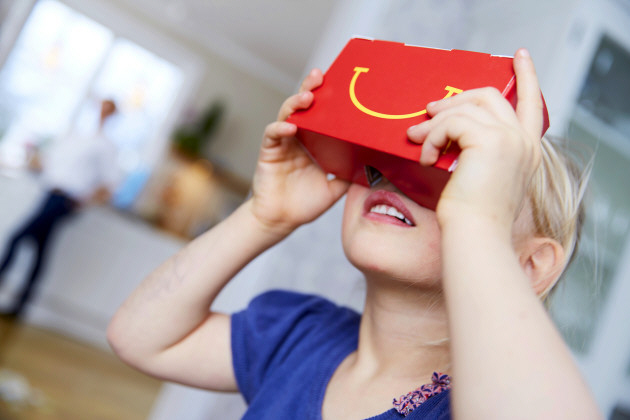 The genius of the original Google Cardboard viewer and, dare I say it, even the Happy Meal viewer, is that it accepts and fits its role. While McDonalds' execution does incorporate a meaningful lesson in repurposing, Google's nears the metaphysical qualities of the original View-Master. Google Cardboard, in its DIY-assembly, disposable, rough-touch material and overall humble supporting-role aesthetic subtly reminds us of systems vs. objects, of the transient qualities of experience and of our own agency in constructing narratives; whether real, augmented or virtual.

The DLX View-Master has made progression on the tricky transition it began last year. The re-orientation towards VR, the new logo, the product design and the collage work on its packaging; they are all very well considered and maintain, on the surface, View-Master's legacy of wonder. But the DLX fails to embrace its new role, instead stretching to preserve the vestigial disc-viewer duality while missing the opportunity to develop a meaningful relationship to its new medium.