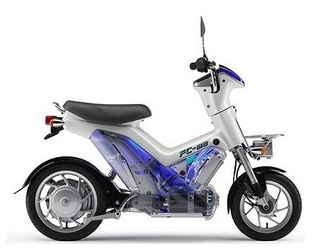 Fuel and energy alternatives are running rampant these days, or at least the ideas are. Could Yamaha soon be releasing the FC-me, a fuel cell-operated scooter?

The "Yamaha Direct Methanol Fuel Cell (DMFC) System" uses a liquid methanol-water solution as its fuel, which eliminates the need for a converter and a pressurized (fuel) tank and thus makes it possible to create a lightweight system for a small vehicle requiring power in the 1 kW range without compromising on power output characteristics.

Prototyples have been developed along with leasing support from the Shizuoka Prefecture. Their October 19th press release sounds promising yet leaves us dissatisfied as to if and when we'll actually get to zip around on the damn things.