Back in Vantablack: After Signing Away Rights to Original, Clever Company Creates Even Darker Version

Talk about sneaky: Following news that artist Anish Kapoor had acquired the exclusive rights to Vantablack, the darkest substance known to man, developers Surrey Nanosystems went ahead and developed an even darker version.

First off, we know it's difficult to visualize the difference between black and Vantablack, but take a look at this and you'll understand. On the right is ordinary matte black paint, the one in the middle is NASA-grade black and the one on the left is Vantablack:

Zero reflection. Impressive, no? But while Kapoor's Vantablack can absorb 99.6% of light, the newer version can block 99.965% of light. Here it is, below:

And here's what happens when you paint a crumpled sheet of aluminum foil with the stuff:

As you can see, the human eye cannot perceive anything coated in Vantablack as a three-dimensional object.

We explained how Vantablack works in the last entry, but to refresh your memory, the surface of Vantablack consists of carbon nanotubes all standing perpendicular to the surface (Vertically Aligned NanoTube Array, hence VANTAblack). The light bounces around between the tubes with no way to reflect back outwards. Some 99.965% of the light is thus absorbed, and while I'm no scientist, I believe the remaining 0.035% of rays become so depressed that they just give up before reaching your eyeballs.

What Can We Use It For?

Now that the newer Vantablack is no longer the domain of a single person, let's put our ID heads together and talk about wider applications. The obvious one would be to incorporate Vantablack into products specifically designed for the ninja market. It's well-known, for example, that ninjas never travel while carrying sandwiches wrapped in aluminum foil; the reflective material is simply too easy to spot, and most ninjas would rather go hungry than take the chance. But a ham-on-rye wrapped in Vantablack would be absolutely undetectable.

There's just one problem: Vantablack can't be touched. Pressure screws up the nanotubes. The only way to maintain the surface is to cover it with a sheet of something transparent and protective. That's why, as The Economist reports, luxury watch firms are apparently interested in the material. A watch face sits behind a disc of sapphire anyway, and the thought is that a watch face of infinite blackness will appeal to the high-end buyer.

The same article points out that Surrey Nanosystems is also working on a spraypaint version of Vantablack called S-Vis, which will absorb 99.8% of light. This opens up more possibilities:

S-Vis can be used over larger surfaces, opening up another design application: architecture. Foster + Partners have expressed interest, as has Asif Khan, a 36-year-old architect from London whose designs were shortlisted for the new Guggenheim museum in Helsinki. Among the properties that appeal to architects is the way Vantablack can absorb heat. Used properly, it could be harnessed to drive the movement of air in order to cool buildings down. 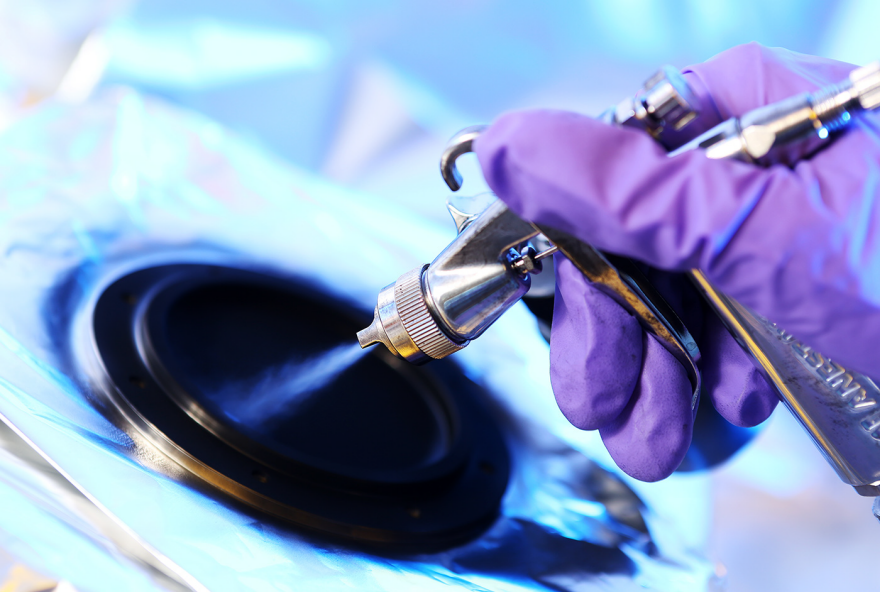 More exciting, though, are the paint's visual properties. A lot of modern architecture, made of glass and steel, is designed to appear weightless and light-filled. This sounds desirable, on the face of it, but Khan thinks the nuance has been lost: that we have forgotten the value of darkness and, through overexposure, of light too. He hopes that architects could use these blacks to "create moments of complete contrast to our daily lives", like punctuation marks. His ideas are expansive: chapels, cinemas, libraries, even entire buildings, which would add intense spots of depth and stillness in cities bristling with reflective, glass-skinned skyscrapers.

Strangely, the article doesn't mention anything about using S-Vis on the headquarters or satellite offices of a ninja organization. But if Khan is smart, he's probably already thought of this.

Back in Vantablack: After Signing Away Rights to Original, Clever Company Creates Even Darker Version