Blooks: The Art of Books That Are Filled With Anything Except Paper and Ink

You can't judge a blook by its cover

We've all experienced the transformative, transporting power of a good book but what about objects that adopt the book as a form—do they hold a similar ability to move us? For years, Mindell Dublansky, a preservation librarian at the Metropolitan Museum of Art's Thomas J. Watson Library, has been collecting a wide variety of functional objects that look like books—or blooks, as she has come to call them. As her collection grew to hundreds of objects, she began to notice that blooks have been around for centuries living "in a parallel universe to real books," as she describes. For Dublansky, "eliminating the text and studying objects that are made to look like books, tells me about what books mean to people."

Her collection runs the gamut from blooks used as storage, household objects made to resemble the familiar shape of books, blooks that take advantage of a hollow interior to conceal another object, "punchline" blooks that are made to deliver jokes, blooks made to memorialize or commemorate an event, and blooks used as learning devices.

All kitschiness aside (and there is plenty of it), the sheer range of blooks—dating as far back as the 18th century and appearing across various cultures—tells us that there exists a human tendency "to reflect values and emotions through creating and associating with books."

Although it began as a private collection, Dublansky's dedicated study has garnered more public attention, with exhibitions at the Vassar College Art Library and most recently at The Grolier Club in New York City. Alongside a recently published survey book, she maintains an extensive blog archiving her findings and tracing their origins. 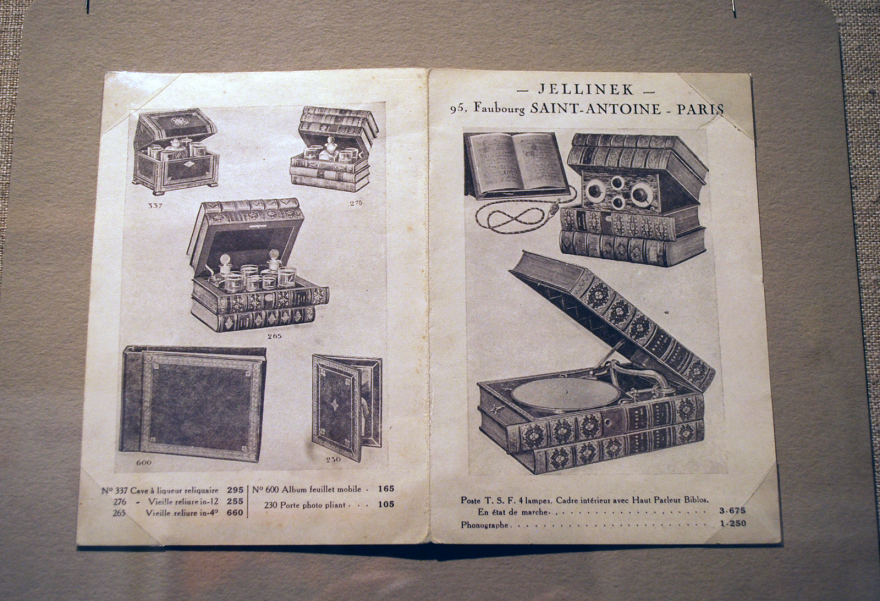 Spread from a French catalog in the early twentieth century showing examples of objects—a crank-up phonograph, a radio, a lamp, picture frame, an album and a cigarette case—taking the form of luxe leather bound books. 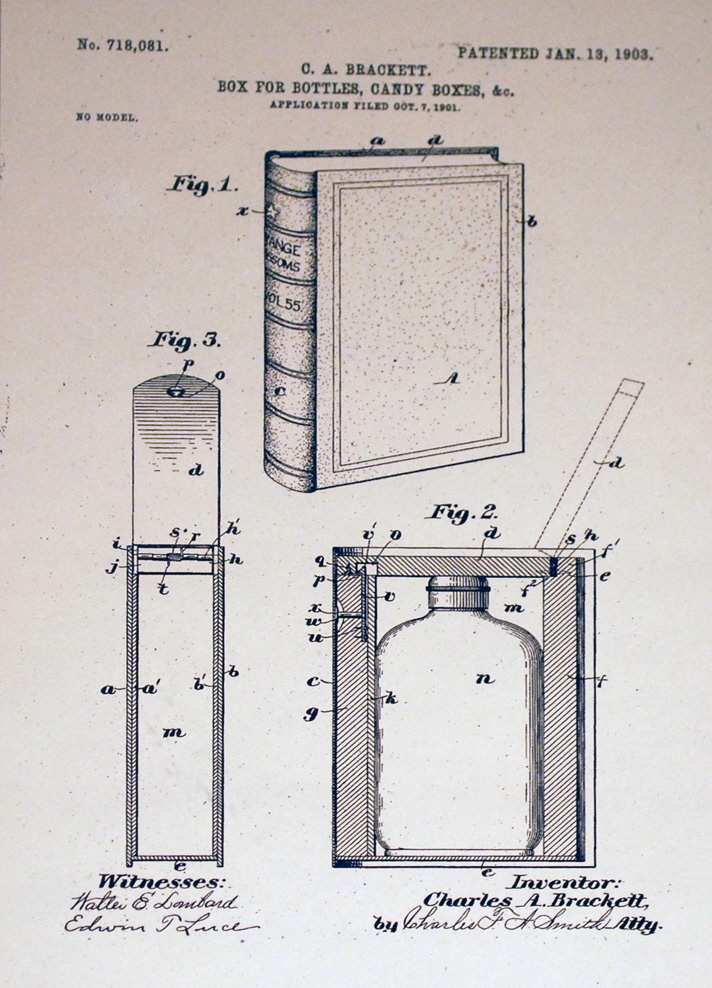 US Patent filed in 1903 by inventor Charles A. Brackett for a box resembling a book but made to house a bottle or candy box. 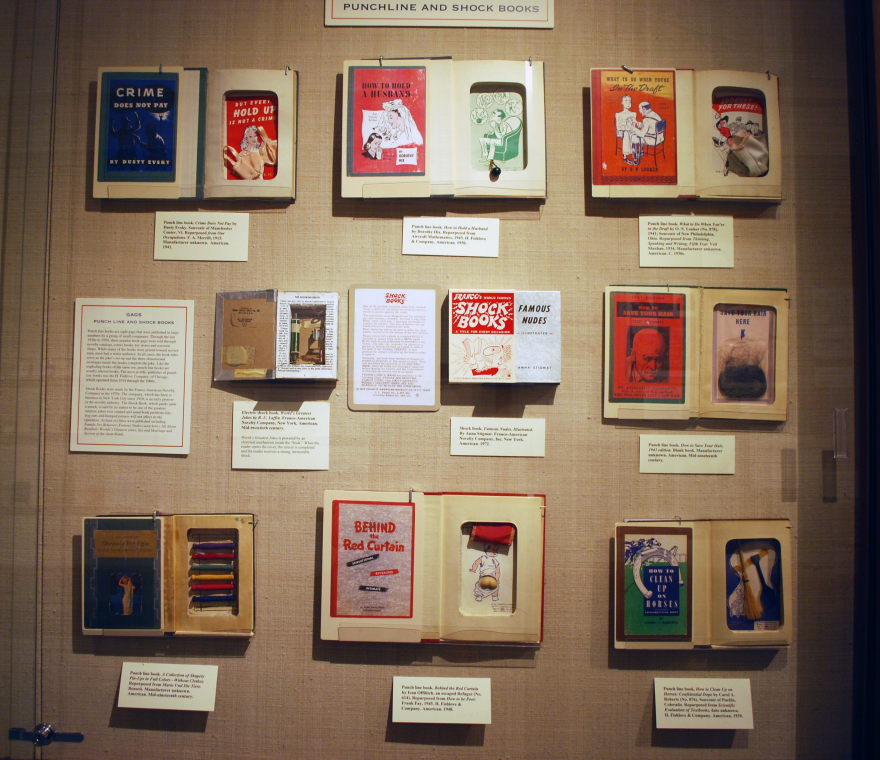 Punchline Books were popular from 1930 through the 1950s, geared more toward service men but eventually finding a wider audience. The book titles serve as the joke's set-up while a three-dimensional object inside the book's hollow core delivers the joke's punchline. In one book from 1941 titled, "How to Save Your Hair: Stop Balding" the receiver would be very much dismayed to discover that upon opening it, no secrets are revealed—rather, an enclosed bag is provided, presumably to "save your hair" after it's already fallen. 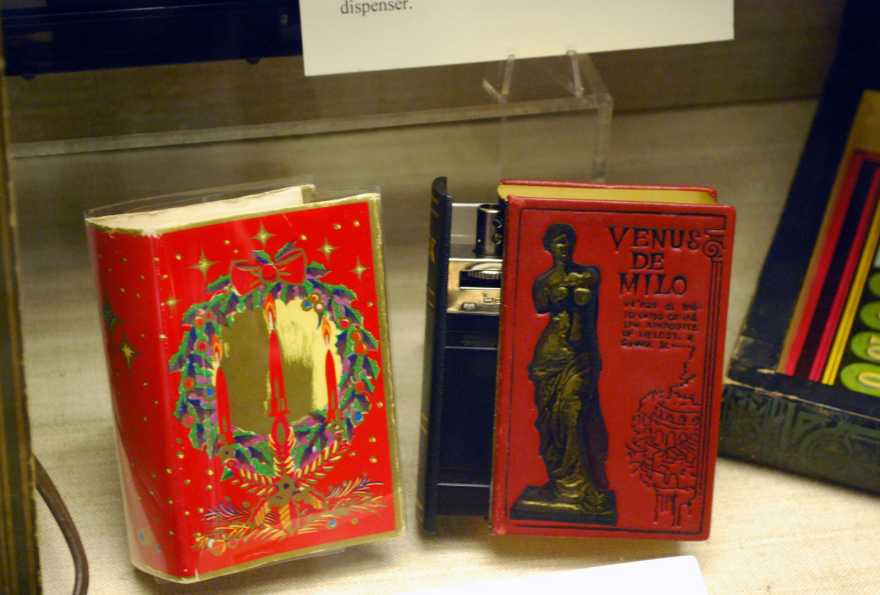 After WWII, Ross Electronics worked with Japanese manufacturers to create novelty items such as these table lighter blooks. 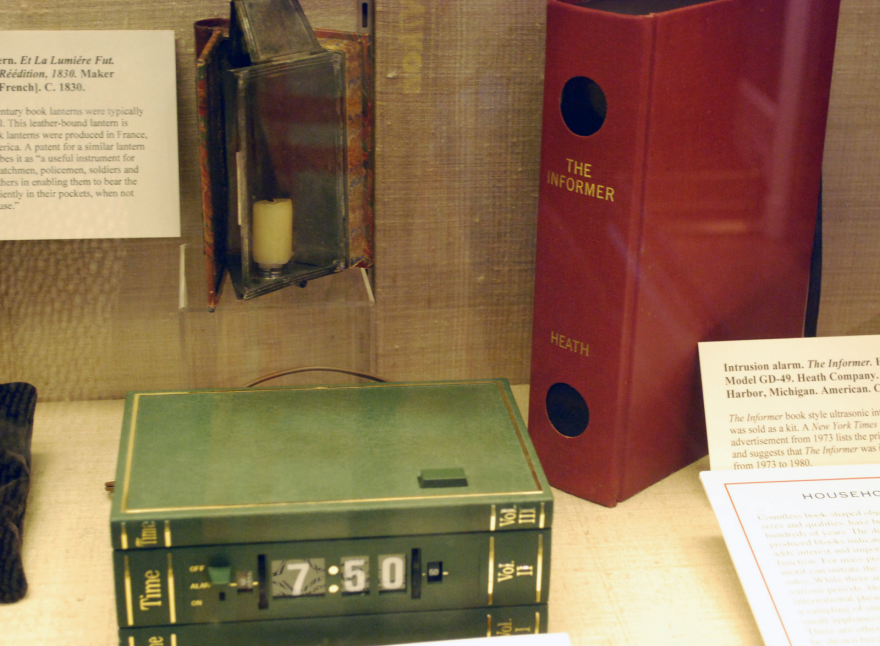 There is a wide variety of household objects made to look like books, indicating that there is a longstanding interest in the book as object beyond its normal function. Some, like the intrusion alarm dubbed "The Informer" make use of the ubiquitous presence of books in our homes to conceal things like sonic house alarms. This model was in production from 1973 to 1980. 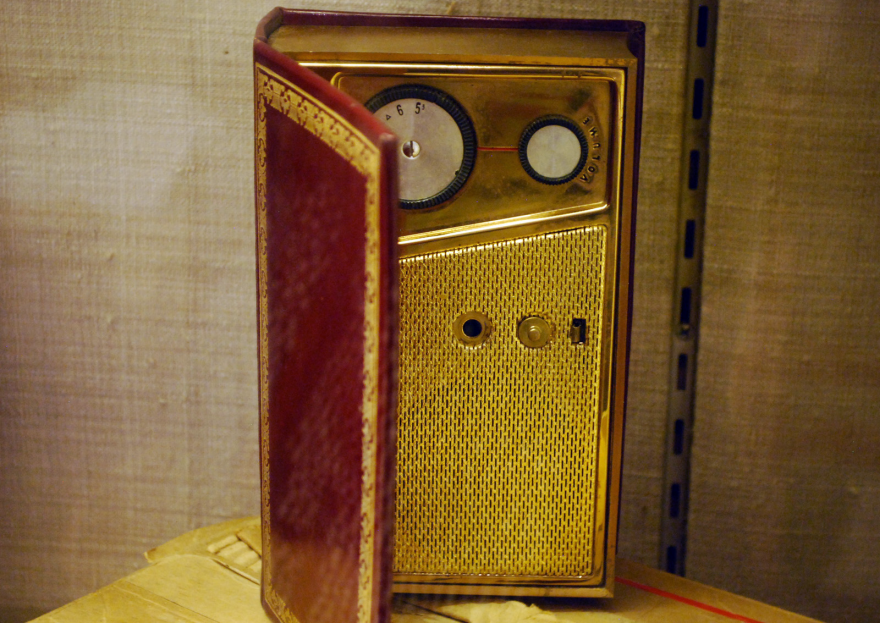 Book radios have been produced since the 1920s and frequently came with gold transfer kits so users could personalize their bindings. 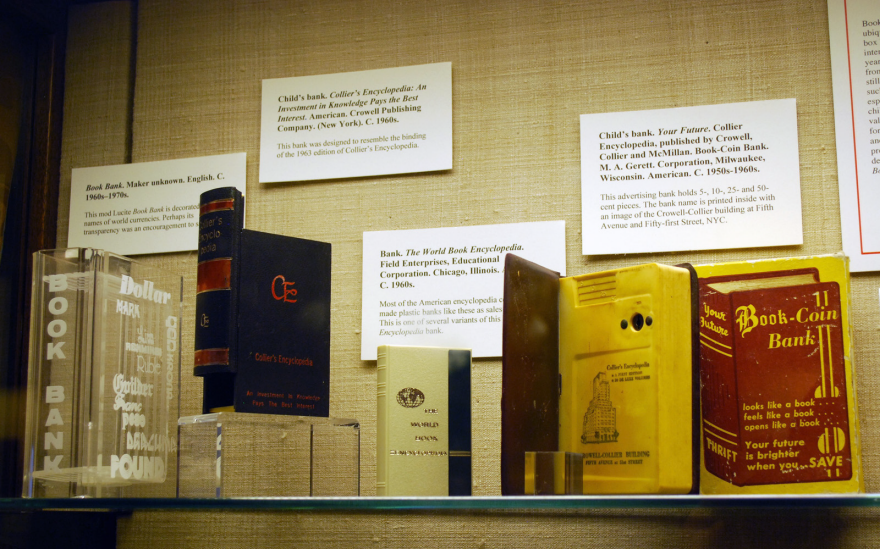 Among the oldest and widespread blooks are those used as coin banks and safes. Some of them are disguised with cheeky titles like "The Book of Thrift" or "How to Win" 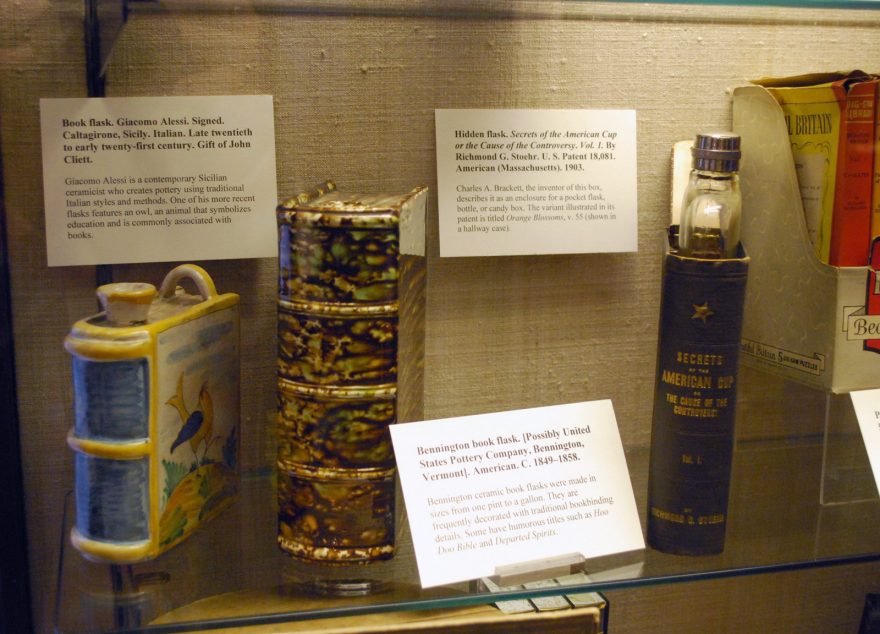 Another very common blook typology is used to disguise flasks. 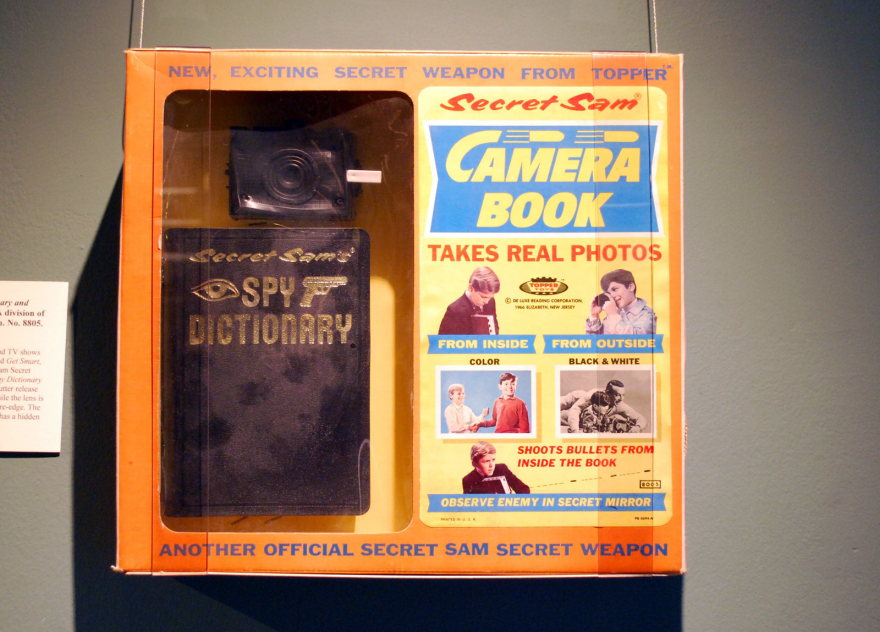 The influence of pop culture phenomena such as James Bond movies in the 1960s led to the production of the Secret Sam Secret Weapon Series. The "Spy Dictionary" contains a sixteen-exposure camera inside. It's shutter release projects from the top of the book and the lens is aimed through an index tab on the edge. The book also contains a hidden mirror and shoots up to three plastic bullets. 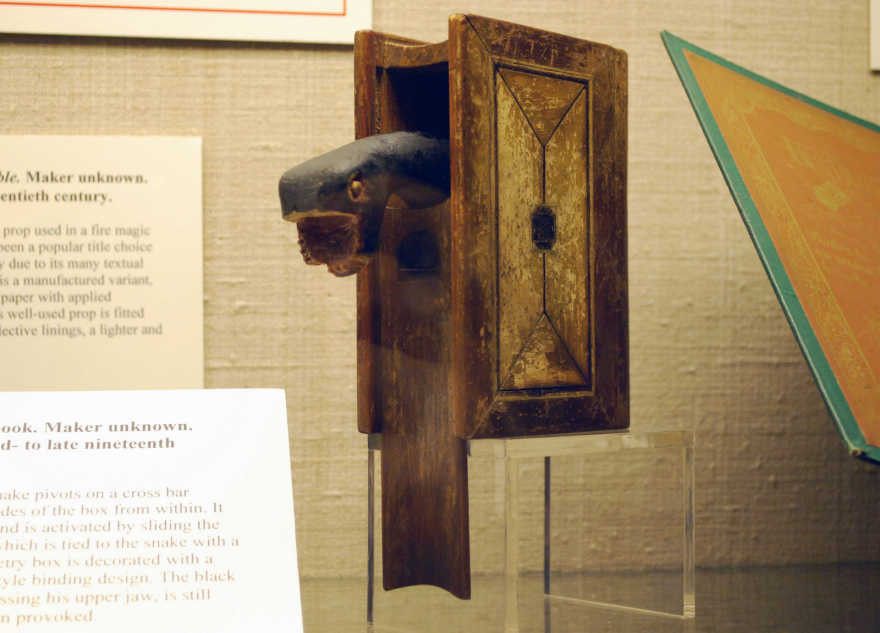 In this trick blook from the mid nineteenth century, the snake pivots on a cross bar anchored to the sides of the box from within. 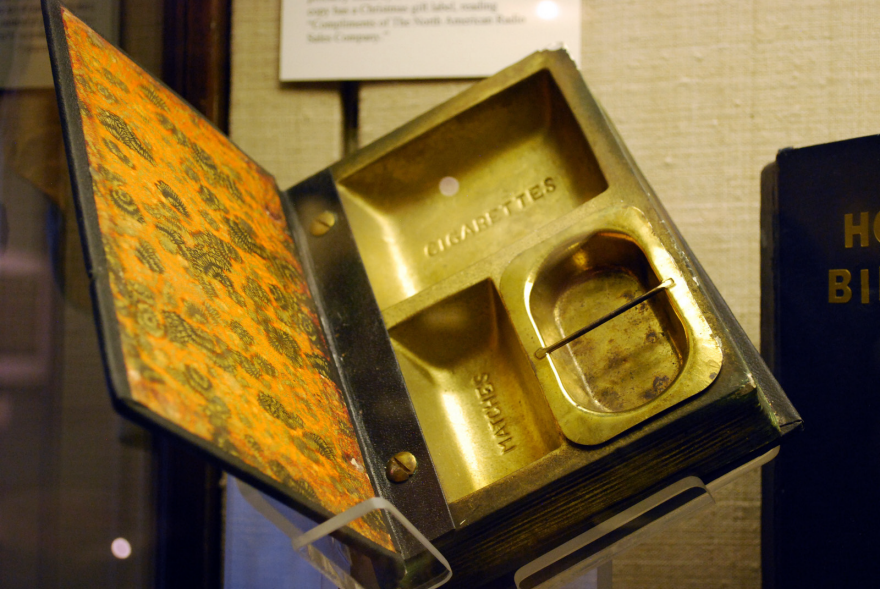 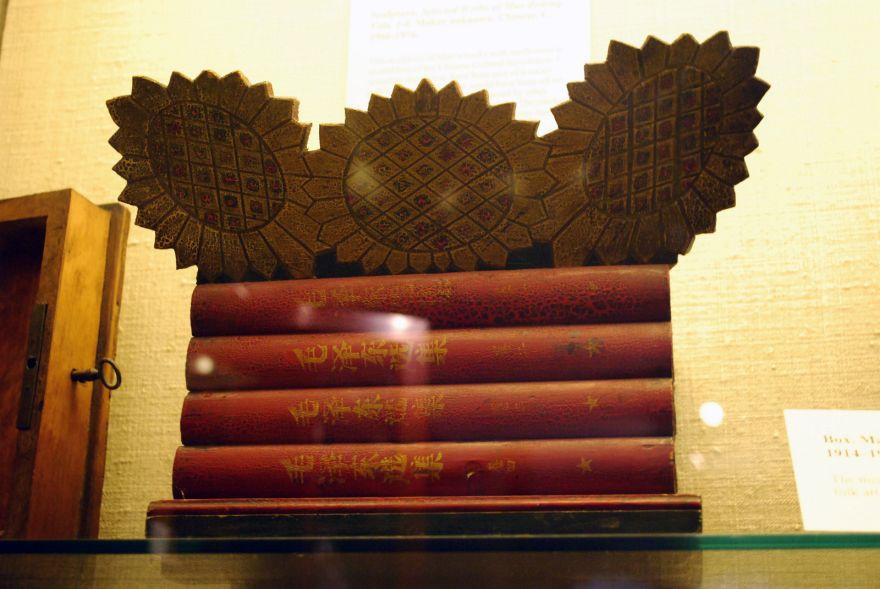 This sculpture of Mao Zedong's books (circa 1966-1976), is believed to have been used as part of a socio-political secular altar that would have been set within a home or business setting. There is room for candles behind the sunflowers. 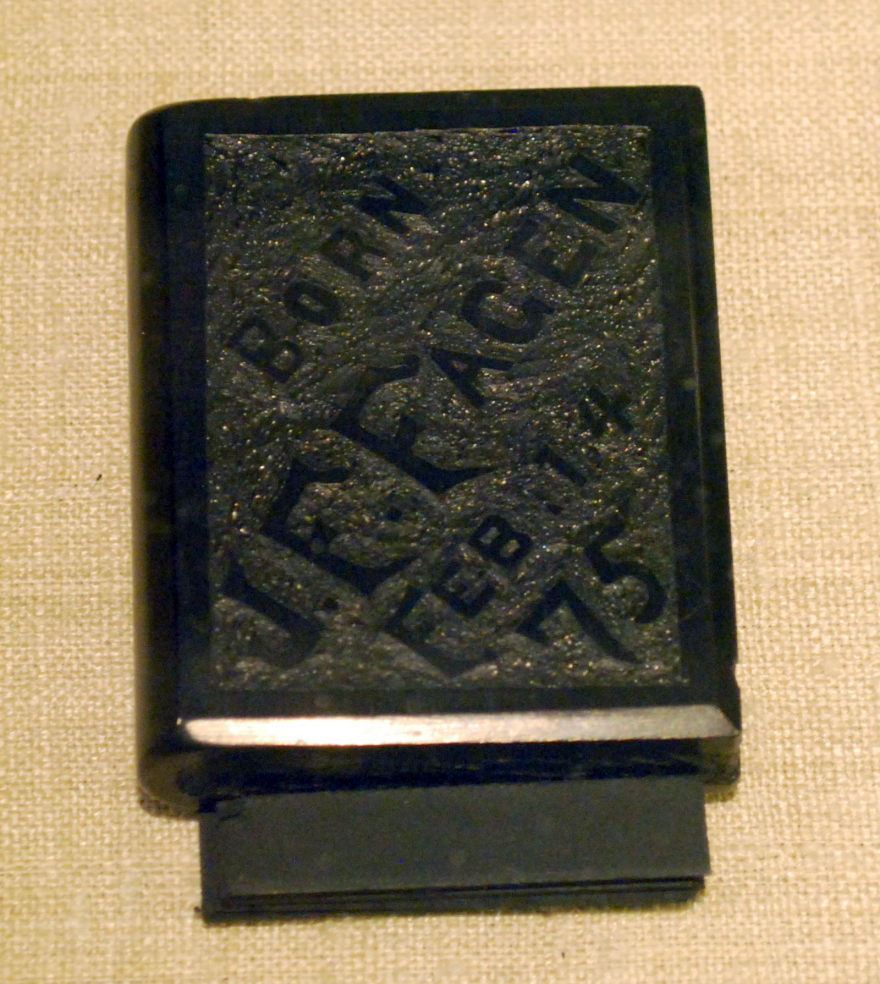 This is the blook that really ignited Dublansky's collection. "For years I collected casually, until one day I found a book carved out of coal that was a memorial to a young person who died at the age of 21 in 1897. It is small and fits in the palm of the hand. It was an extremely powerful object; to me it seemed like a prayer book and a memorial book together, a relic of a life lost too soon. The book's maker used coal, a material that must have been essential to his life and through the making of it, imbued it with all of the love and sorrow they felt over the loss of their loved one. The little book retains those emotions today."

Blooks: The Art of Books That Are Filled With Anything Except Paper and Ink