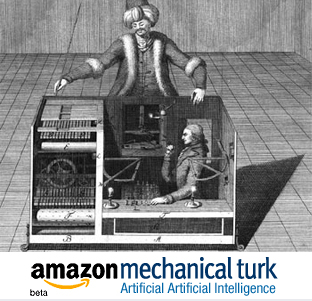 Online service giants, specifically Amazon, seem to run like well-oiled machines based on overwhelmingly seamless automation that gets the job done. Little did we know that there are real faces hidden in the cracks, handling odd tasks that computers can't perfect. With pay ranging from one cent to several dollars, these folks perform various tasks like taking surveys, contributing to a restaurant guide, transcribing audio clips, and looking at photos on the Web to identify colors, street addresses, or human faces. Amazon even has a page dedicated to Turkdom.

The "Mechanical Turk" refers to an 18th-century hoax involving a mechanical chess-playing automaton. Outfitted with whirling gears and a head topped with a turban, the Turk toured Europe, defeating human opponents. But the impressive-looking robot was a fake: A human chess master was hidden inside. usa today via business innovation insider