The HyperAdapt 1.0 is designed for actual performance improvements, not just the cool factor

When Nike came through with an actual pair of self-lacing Mags, presented to Michael J. Fox on October 21st, 2015, we all thought the Back to the Future callback was cool. What we didn't expect was that Nike would actually pursue the technology in order to provide practical benefits to the wearer.

Nike has announced their HyperAdapt 1.0 kicks, which they're calling "the first step into the future of adaptive performance." The sneaker self-laces—well, tightens itself, really—once the user steps into it, as their heel triggers a sensor that drives some type of onboard motor. While tech details are scant, they have revealed that the shoe uses an "underfoot lacing mechanism," meaning the appearance of the laces up top will not change, as they did in Back to the Future II. The user can also quickly microadjust the fit via two buttons on the side that trigger tightening and loosening functions. 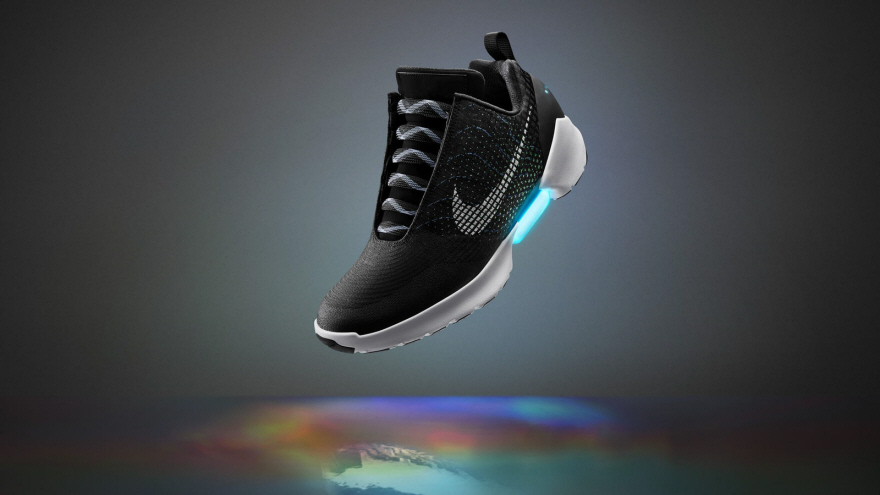 The idea behind the technology is that it confers an actual performance advantage:

The innovation solves another enduring athlete-equipment quandary: the ability to make swift micro-adjustments. Undue pressure caused by tight tying and slippage resulting from loose laces are now relics of the past. Precise, consistent, personalized lockdown can now be manually adjusted on the fly. "That's an important step, because feet undergo an incredible amount of stress during competition," says [Nike designer Tinker Hatfield].

The person tasked with making these shoes a reality is engineer Tiffany Beers, a Senior Innovator at Nike. As project lead, Beers coordinated a team of engineers through the required steps to arrive at the shoe, starting big: Their first effort was a snowboard boot with an external motor. While that might sound unpromising, in terms of scale, Beers and her team got the technology sneaker-sized for the famous October 21st target date for Fox, and the HyperAdapt is the next step.

As the "1.0" in the name indicates, it may take a few iterations before Nike hits the home run they're seeking, but we're more impressed that they're going down this path in the first place. The company's end goal goes beyond mere gimmickry, as revealed by Hatfield:

"Wouldn't it be great if a shoe, in the future, could sense when you needed to have it tighter or looser? Could it take you even tighter than you'd normally go if it senses you really need extra snugness in a quick maneuver? That's where we're headed. In the future, product will come alive."

The shoe will be released later this year for the holiday season, in three different colors. As you'll see in the video below, in order to buy a pair you'll need to have downloaded the company's Nike+ app.