As mentioned in the last entry, I delivered E.C. Emmerich's traditional German wooden-bodied handplanes to Jimmy DiResta's shop after returning from Germany. The first thing DiResta noticed was ECE's crenellated pattern where the sole meets the body: 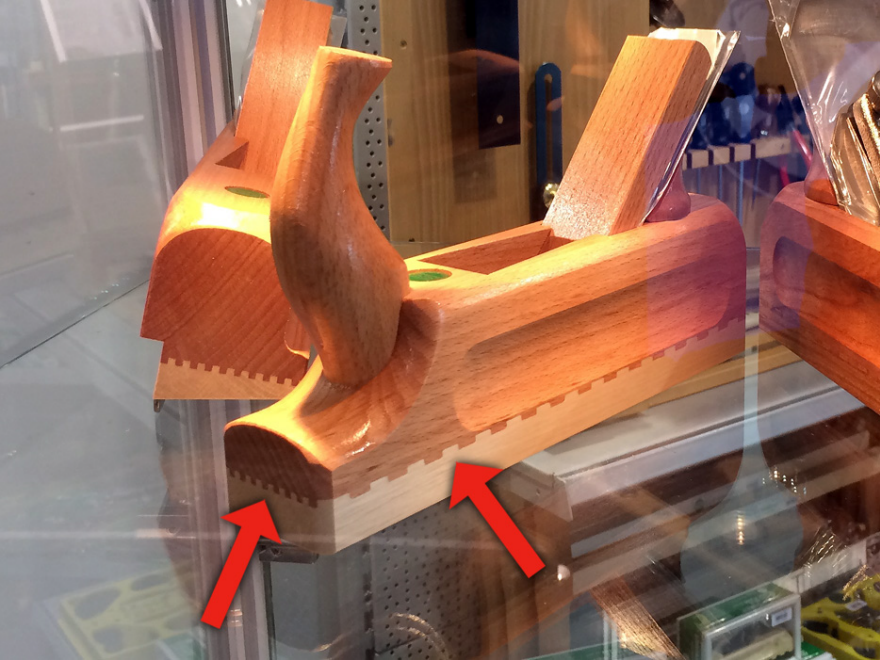 Jimmy surmised that they were joined using a sort of long, angled box joint, with the giveaway being the width difference in crenellations on the toe and sides of the plane. 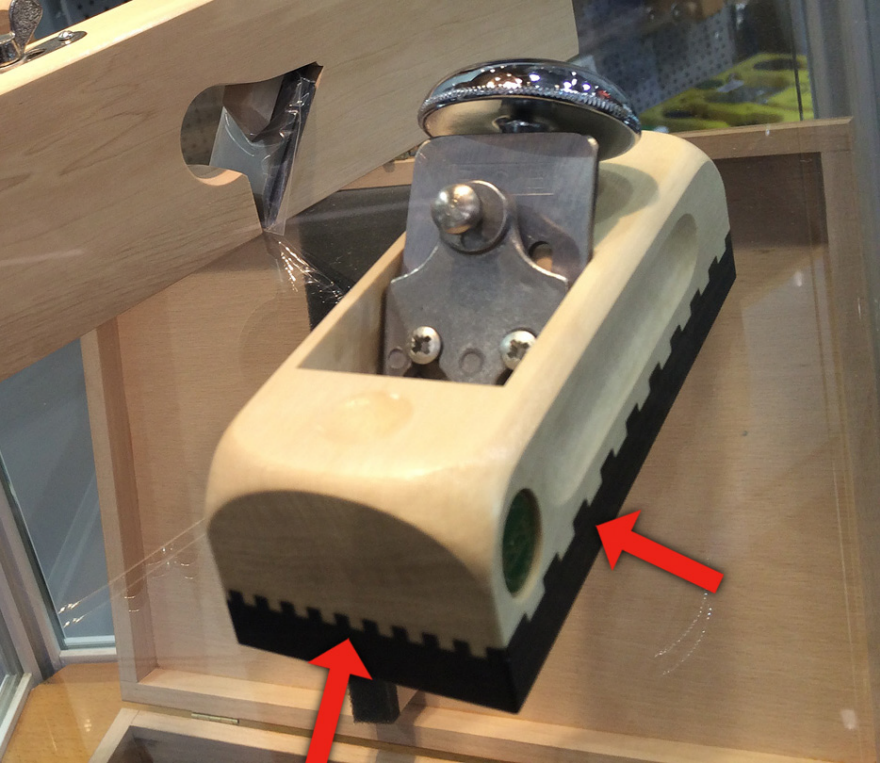 I did some digging and found out he was right. In order to form a rock-solid attachment that cuts down on wood movement, twisting and warping, what ECE does is cut the top of the sole and bottom of the body with a series of parallel kerfs. 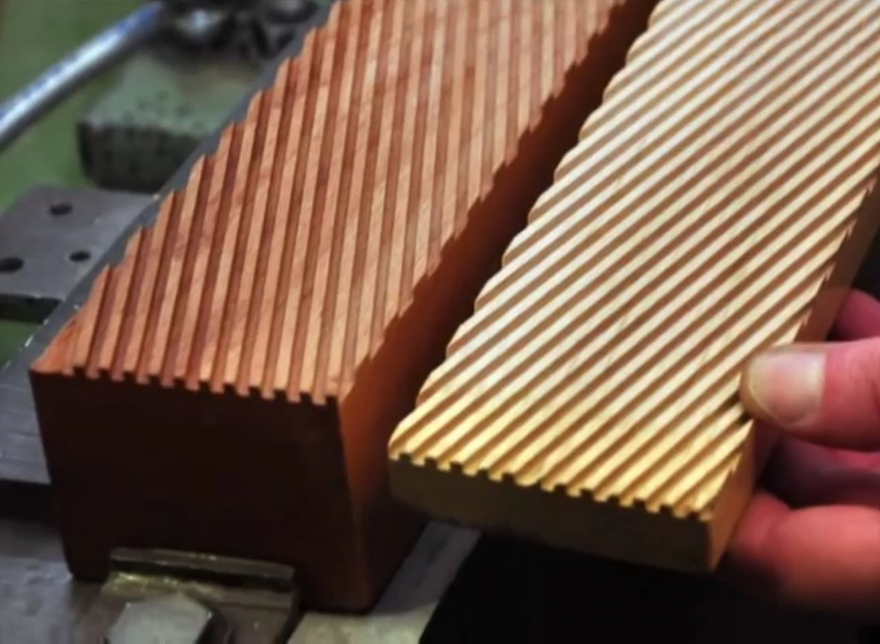 These are then joined. Their bodies are beech, while the soles are made from hornbeam or lignum vitae, depending on the model. 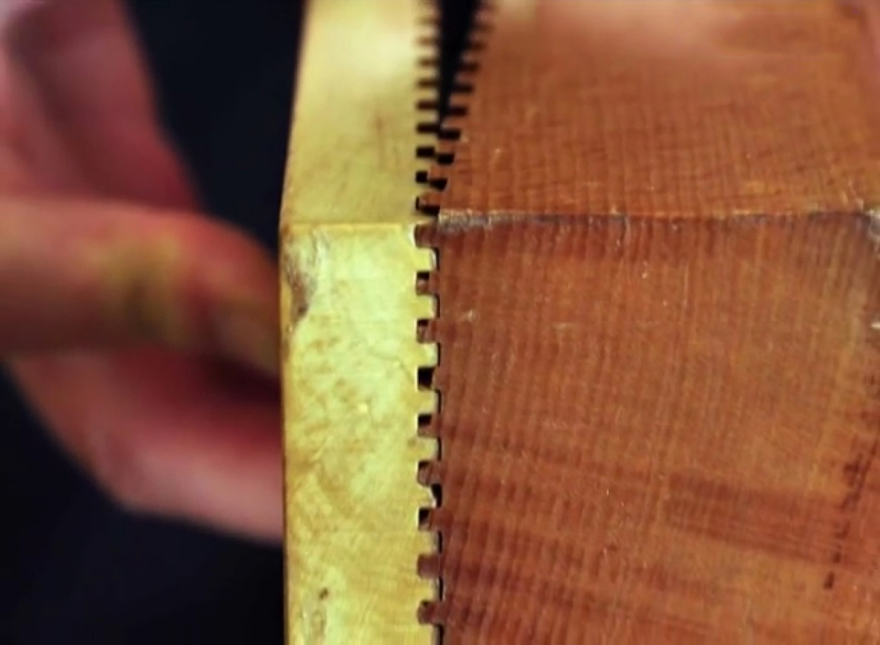 So how long can a connection like this last? The answer arrived the next day in the form of David Waelder, Jimmy's shopmate and fellow YouTube maker. "I was shocked when I saw the ECE block plane sitting on the bench," Waelder says. He reached into his bag and pulled out his own. The difference is, Waelder's is some 40 years old. Here's the photo they texted me of the two side-by-side: 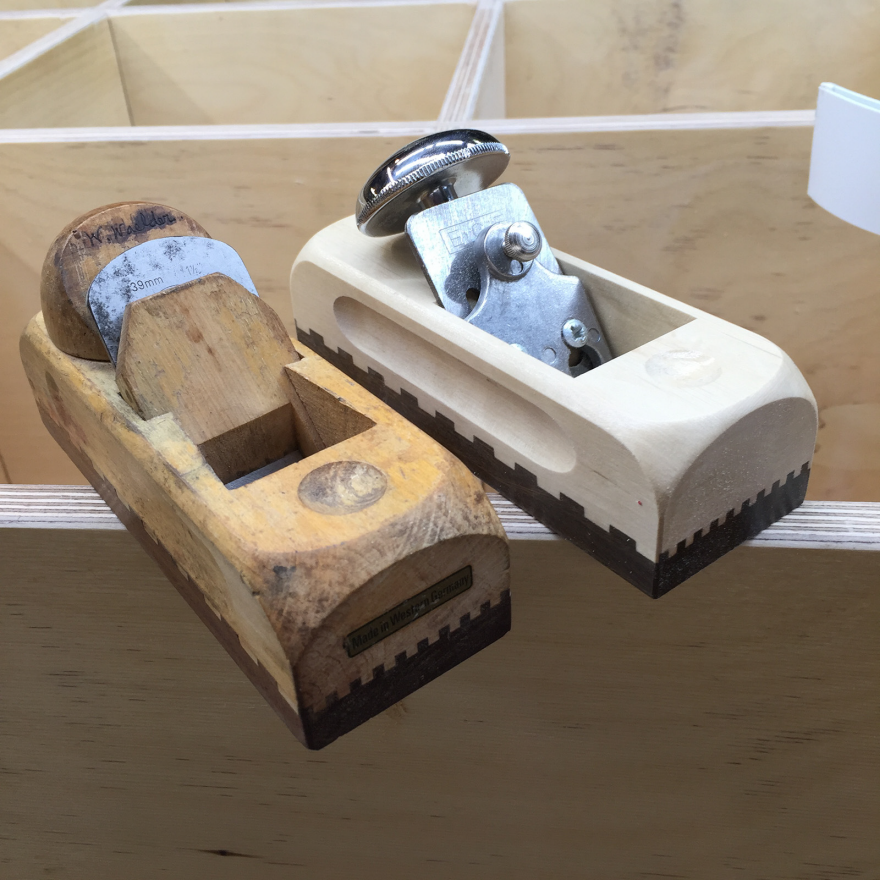 I grew up in upstate New York, in a big family of builders that was all about physical work—"We gotta get together and move this shed," "we've all gotta go fix this fence," et cetera. My grandfather was an engineer, my father and uncle, who lived next door to each other, were carpenters. We were all always building stuff.

My cousin and I had our own tools from a young age—shit tools, beater chisels, saws you weren't afraid to leave in the yard. But in the grown-ups' workshop was this [cue heavenly music] Top Drawer. There was practically light gleaming out of it. In that special drawer were all the nice tools, the stuff my cousin and I weren't allowed to touch; perfectly maintained chisels, dovetail saws, that ECE block plane, and a few other fine tools. Growing up, everything in that drawer was an icon of high quality to me and my cousin.

The block plane belonged to my uncle Bill, a master carpenter who did displays, installations and restorations for the Metropolitan Museum of Art—really high-quality stuff. That was his plane. It was in that Top Drawer and we weren't allowed to touch it.

After a long career, Waelder's seemingly healthy uncle unexpectedly passed away four years ago. Waelder's heartbroken aunt was unable to bring herself to enter his workshop, and everything inside sat untouched for years. But around half a year ago the family finally went in to redistribute his tools among family members. David got the ECE block plane.

My grandfather had the same block plane and he kept his pristine, but my uncle, he wasn't afraid to put the miles on his. It was one of his workhorses and he also carved his name into it. When I got it, I dressed everything, cleaned up the sole, waxed up the wood, flattened the iron on glass and sandpaper and it was good to go. 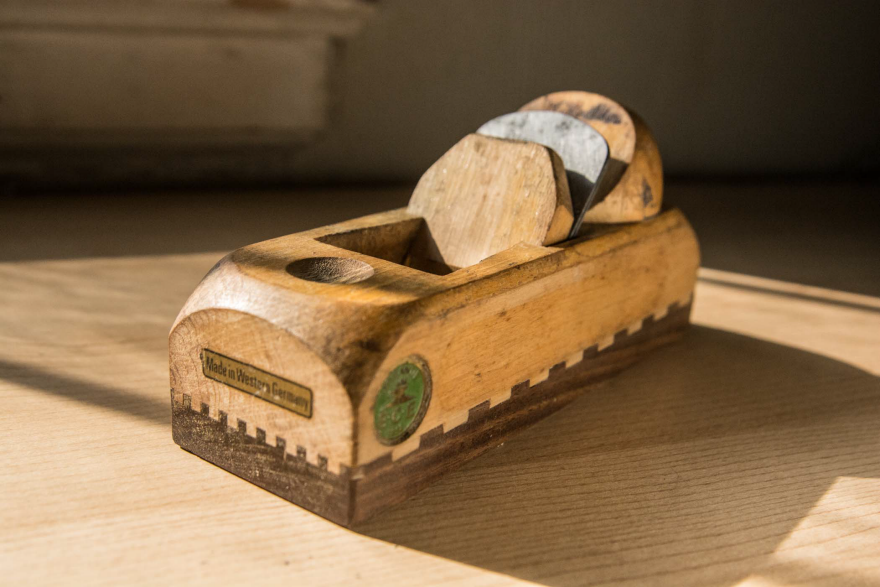 Uncle Bill's, now David's, block plane. I'd almost forgotten there was ever a "Western Germany." 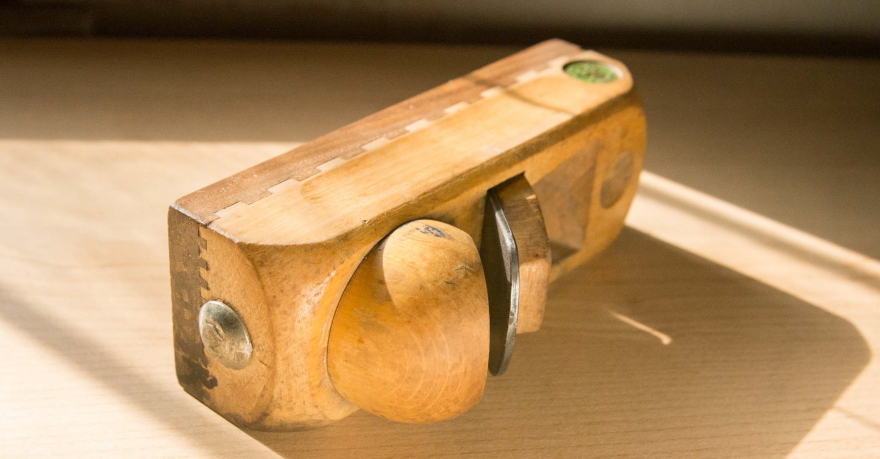 This thing has been in the Metropolitan Museum of Art. But it wasn't on display; it was used to craft displays.

Core77: Any idea what year your uncle purchased this plane?

David Waelder: My dad said it was forty years ago in New Mexico.

What kinds of things do you use it for?

I carry it in a specific pouch and I'm reaching for it all the time. It's great for putting chamfers on bookcases, hogging off a proud bit of endgrain, flushing up edges and countertops, trueing up the side of a wacky board. I've even used it to shave plywood.

Oh man. It kicks ass, where do I start—I never have to deal with tearout; the wedge is nice because it's deep and solid, if you tap on it you can hear that everything is engaged and connected; there's just no play.

It's lighter than a metal block plane, and I like the form, the higher posture; it really gives you something to grab. And I dig that I can push it or pull it, like if I want to approach end grain from the other direction and not blow the back out.

How do you have yours set up?

Lighter, I use mine as more of a finisher; I'm never readjusting the blade to hog something out, it's just dialed in and set. And the great thing about the wedge design is that you can throw it in the pouch or your bag or pockets and it will never come undone [i.e. your settings won't go out of whack].

Does the lighter weight versus a metal handplane have any drawbacks?

Well, I'm not flattening doors with it. Though technically I could, like with this plane and a string and a pencil I could do the work of a lot of other handplanes with just this. It's incredibly versatile.

How's the iron, does it hold an edge?

Beautifully. I've only honed the thing twice, and even then just on a buffing wheel.

So I guess this tool will stay in your rotation.

Yes, and next I want to build a nice case for it. Being my uncle's, it's got great sentimental value. 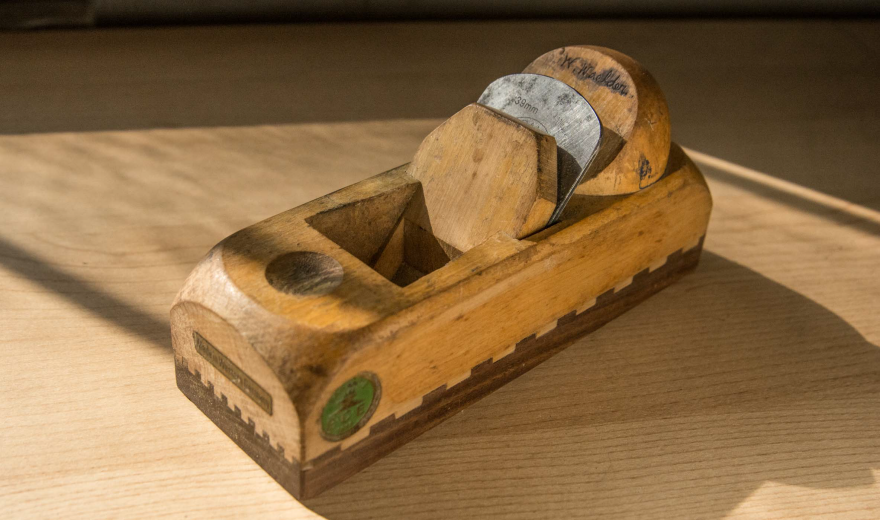 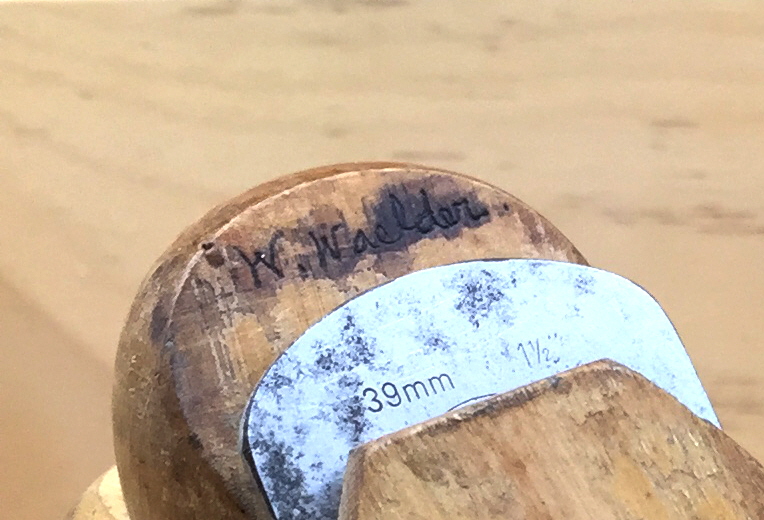