We take a closer look at the career of one of GM’s original Damsels of Design. 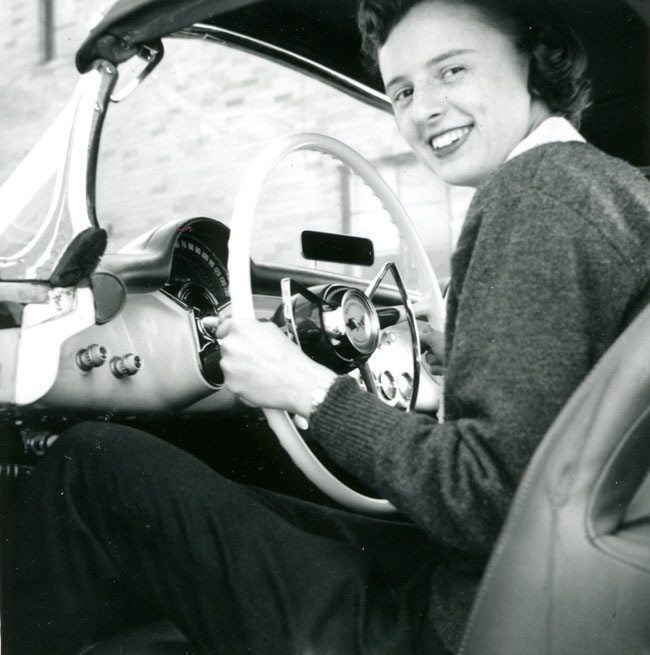 Vanderbilt in her Corvette in the mid-1950s (after starting at GM, Vanderbilt became a lifelong Corvette enthusiast). Image via the Suzanne Vanderbilt Papers, Cranbrook Archives

Last week, we looked at the story behind GM's famous Damsels of Design, a group of ten women brought on board by the automaker in the mid-1950s in an attempt to better reach newly powerful female consumers. Unfortunately, America's first all-female design team was short-lived; most of the designers departed by the early '60s, after their department was taken over by Bill Mitchell, who reportedly said, "No women are going to stand next to any senior designers of mine." Despite this pronouncement and widespread sexism in the industry, one of the original Damsels, Suzanne Vanderbilt, stayed on and tenaciously worked her way up GM's ranks, ultimately to the title of chief designer. Today we'll take a closer look at Vanderbilt's career and her automotive design innovations.

Vanderbilt graduated from Pratt Institute in 1955 with an industrial design degree and was promptly recruited by GM to join its Styling Section, where she worked in the automotive interior design department, first as a junior designer for Chevrolet and then as a designer for Cadillac. In an interview with David Crippen for the Automotive Design Oral History Project, Vanderbilt recalled that even though she didn't have a background specifically in auto design, she and her fellow junior designers "really learned from ground one how to put the car together…. But, those were the days when [there was] a misconception about interior designers, meaning you just select fabrics and sew things together…but there's a lot more to it than that, and that's what we tried to tell the press over and over again. We weren't there just to decorate. Unfortunately, the projects that were publicized were decorating." (In addition to their regular duties, Vanderbilt and the other female designers were often asked to take on publicity tasks for GM like designing special exhibition cars and appearing in television interviews, promotional films and photo shoots.) 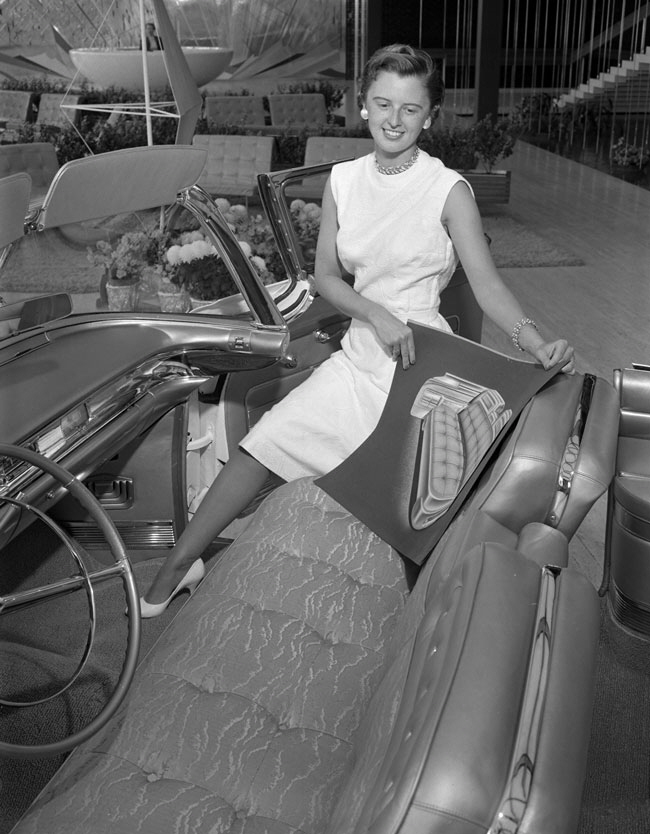 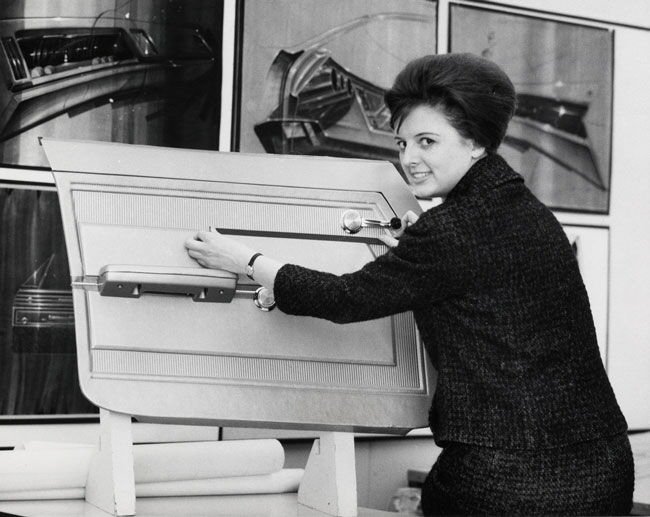 Vanderbilt, then a junior designer at Chevrolet, demonstrating the placement of controls on an interior door. Image via the Detroit Public Library Digital Collections

In the late 1950s, Vanderbilt wanted to broaden her experience at GM and joined the Advanced Research Studio, where a diverse group of engineers, designers, human-factors personnel, drafters and material specialists all came together to brainstorm the future of car design. There she worked briefly on the Firebird III concept car ("they were hesitant to give me much to do except an arm rest and a little doorknob or something…") and an experimental automated highway system called the Autoline. In 1960, Vanderbilt became a senior designer in the Advanced Interior Design Studio and also worked on human factors and safety for the Research Studio, which led her to secure two patents. One was a design for an automobile seat with an inflatable lumbar support that improved the seat's ergonomics by inflating or deflating three horizontal rubber tubes with a small switch-on motor. The other was for a collapsible safety switch that was designed to recess on impact and could be used on the instrument panel instead of standard knobs (which protruded dangerously in a crash). Regrettably, GM never put Vanderbilt's innovations into production. 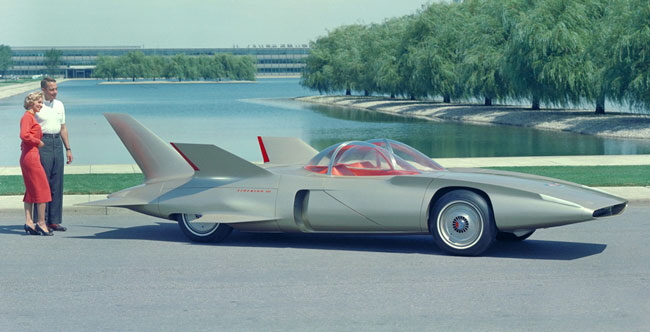 A joint effort between GM's research laboratories, styling staff and engineering staff, the Firebird III was a "laboratory on wheels." Image via the GM Heritage Center Collection 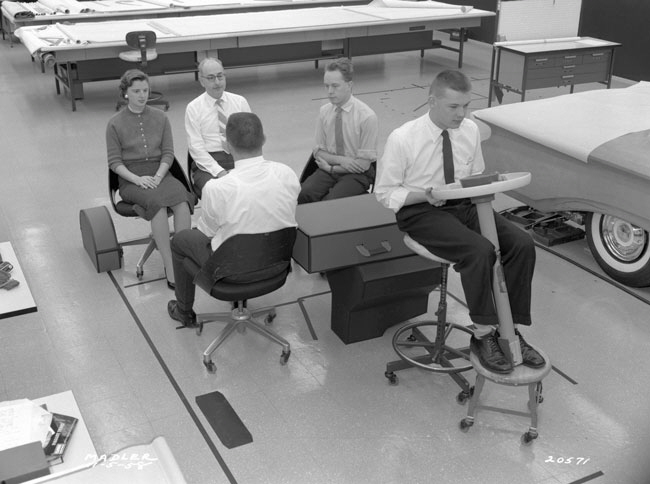 Vanderbilt and colleagues experimenting with seating arrangements for a sedan in 1958. Above and below images courtesy General Motors Design Archive & Special Collections 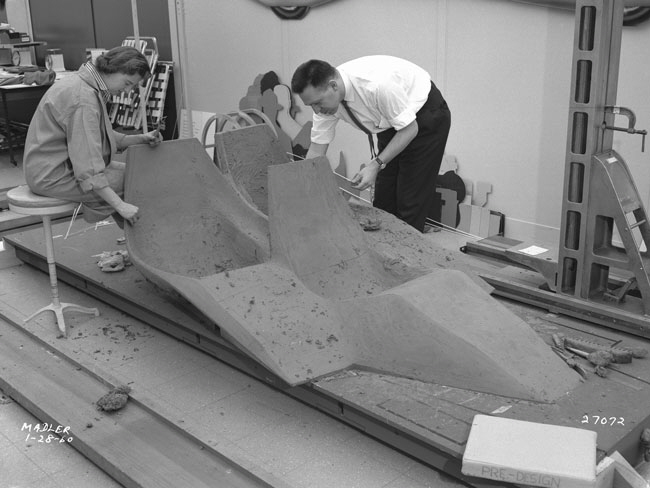 Vanderbilt working on a clay model related to the Autoline research project in 1960—the vehicles developed for GM's futurist transportation study would have had a Chevrolet Corvair engine for city travel and an electric linear motor for automated highway travel. 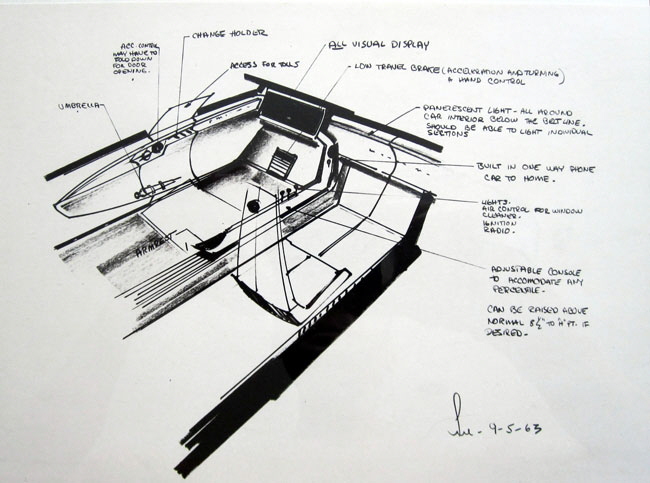 From 1963 to 1965, Vanderbilt took a sabbatical from GM to pursue an MFA in metalsmithing at Cranbrook Academy of Art. In her interview with Crippen for the Oral History Project, she admitted that she had hoped studying in the metals department would help her transition to designing for automobile exteriors at GM. It didn't. Despite her new degree, Vanderbilt was never able to break into the male-dominated field of exteriors; even more galling, upon returning to GM she found that she had been demoted, "working for people that had been working for me…I, essentially, had to begin again. And, it took four years to move back up again." 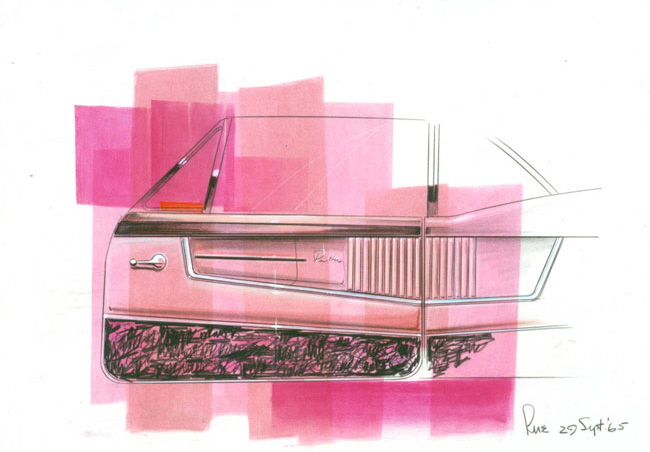 A 1965 drawing by Vanderbilt for the interior door of the Panther (a code name for the Camaro). Above and below images via the Suzanne Vanderbilt Papers, Cranbrook Archives 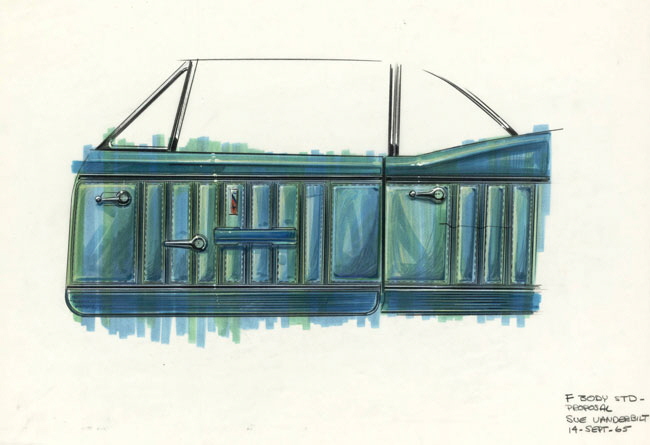 Vanderbilt spent this time in Chevrolet's Interiors Studio, working on designs for doors, seats, steering wheels and knobs, as well as taking on extra work coordinating color trim for commercial vehicles. By 1972 she finally became chief designer of Chevrolet's Interior Studio, working on small cars like the Nova, the Camaro and the Chevette. Sadly, at the height of her design career an illness forced Vanderbilt to scale back her work and ultimately take an early retirement from GM in 1977. She passed away eleven years later at the age of fifty-five. Speaking with Crippen three years before he death, Vanderbilt reflected on her career and what motivated her to stay in such a challenging field: "[W]hat makes a designer go on is that you're never satisfied, you're constantly looking [for] perfection, new and creative answers." 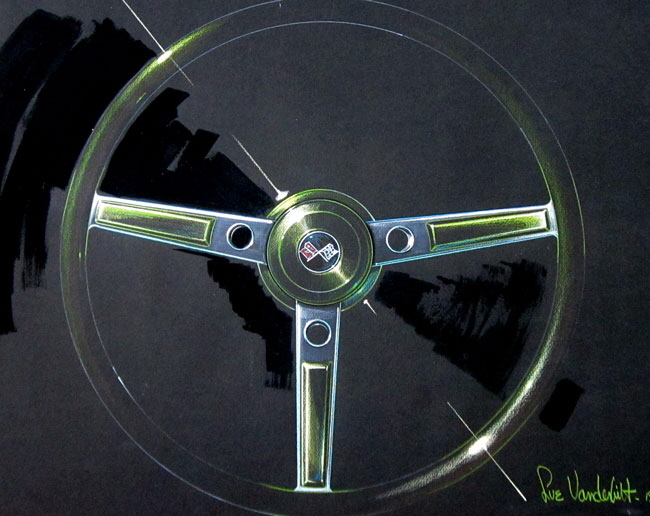 Drawing for a Corvette wheel, 1966. Above and below images courtesy Ryan Vanderbilt 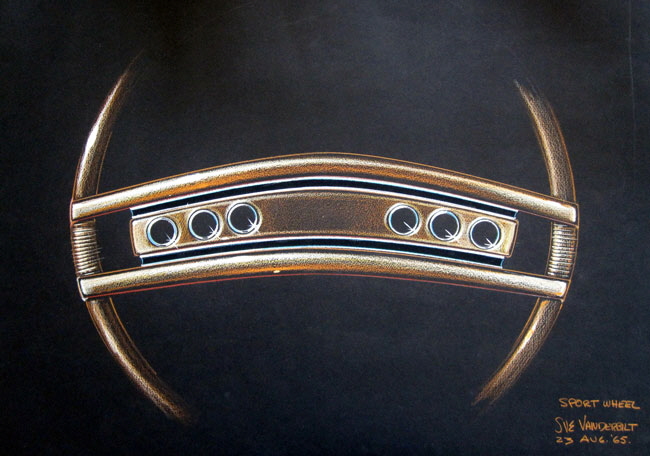 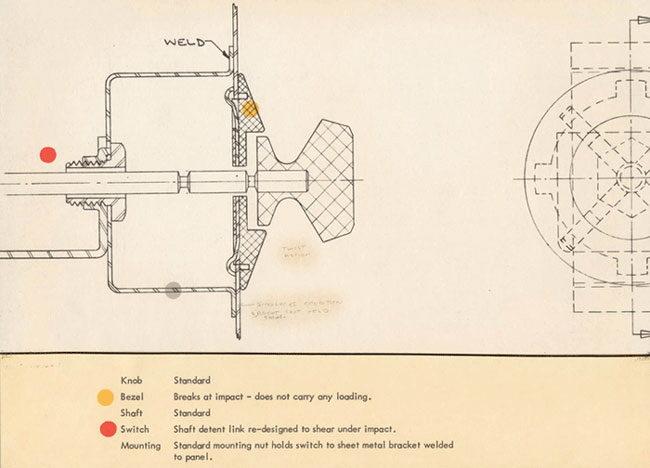 Vanderbilt's diagram for a safety switch. Image via the Collections of The Henry Ford 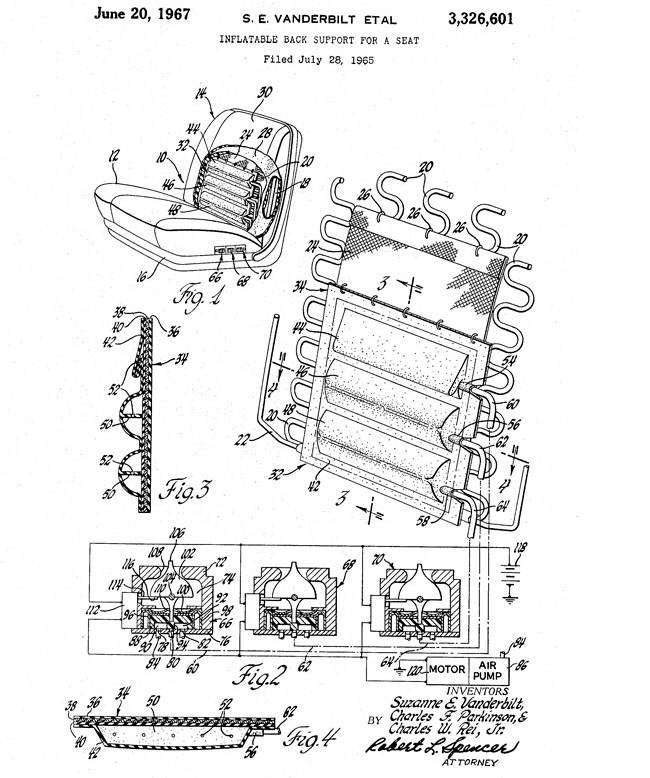 Vanderbilt's inflatable back support was an early attempt to make automobiles more ergonomic; unfortunately, her innovation was set aside by GM. 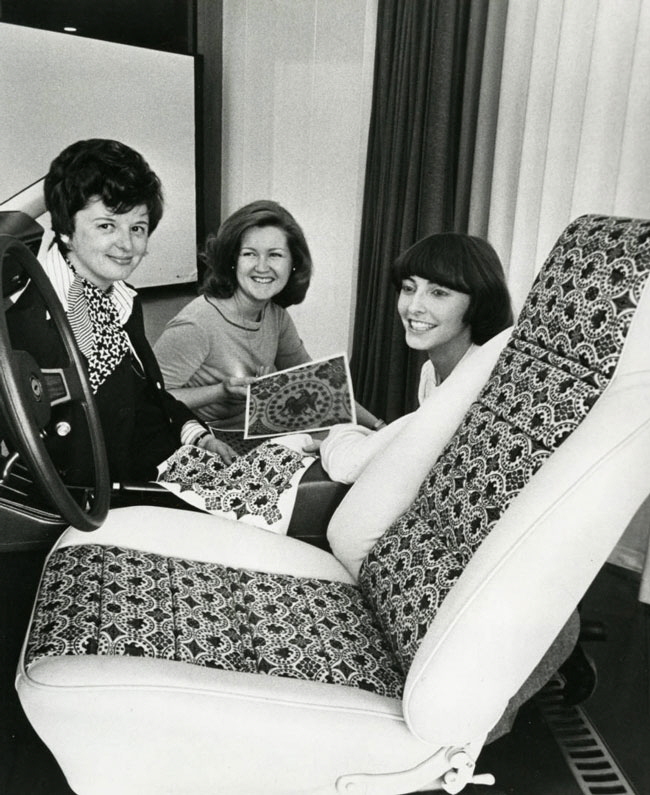 Vanderbilt in 1976, a year before her early retirement, with fellow designers Barbara Munger and Jan Tribbey; the three collaborated on a special bicentennial car interior that referenced American quilt patterns. Image via the Suzanne Vanderbilt Papers, Cranbrook Archives

This was the latest installment of our Designing Women series. Be sure to also read our profile of Mimi Vandermolen, an ergonomics pioneer at Ford.