During Develop3D Live, the company made some very exciting announcements

In our first round-up of Develop3D Live, we covered talks from IKEA, RoboSynthesis and London-based startup Mayku, but we thought that the announcements made during Onshape's presentation deserved a post of their own. 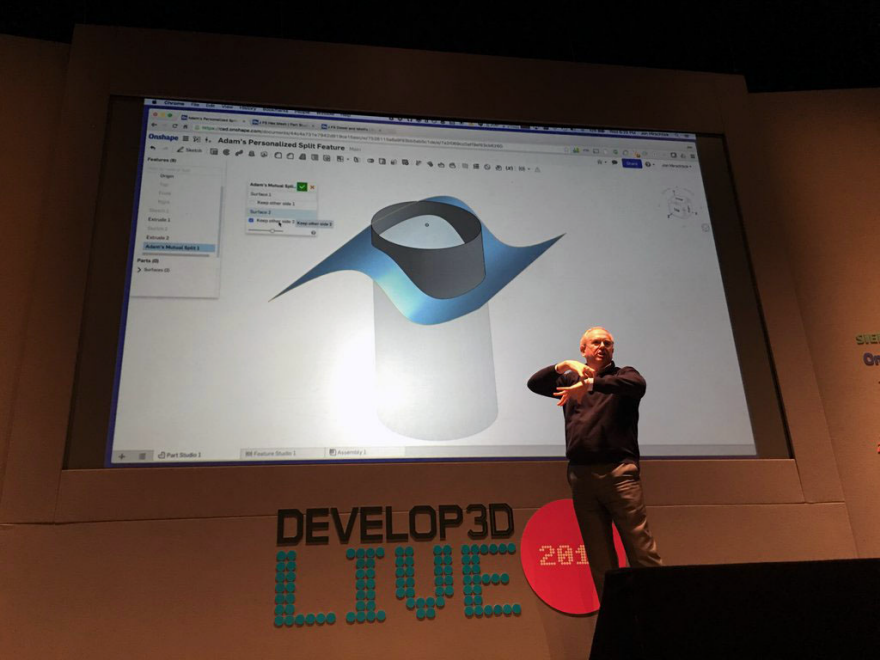 Jon Hirschtick is a rockstar of the 3D CAD world. His original claim to fame was as a key player in MIT's blackjack team—earning over $1 million during his time there—a story that was featured in the movie 21. With his winnings, he started a little company called SolidWorks, and in 1995 they launched the only windows-based 3D CAD software on the market. His team disrupted and democratized the industry— before SolidWorks came along, your CAD software had to be pre-loaded onto a ridiculously expensive purpose-built workstation...

Well, here we are in 2016, and he's at it again. The original SolidWorks development dream team got back together last year and launched Onshape. Their initial product was still in beta, with only a few basic tools and features, but if you focus on the tools, you miss the key points.

Here are the most important things to know about Onshape:

1. You don't need an expensive CAD-optimized PC—hell, you don't even need a PC! Onshape is completely cloud based, and all the heavy processing is taken care of by Amazon. You can use it in your browser or in app-form on iOS and Android.

2. Design revisions are automatically taken care of, as a standard. Managing multiple versions of your files is usually an expensive afterthought for other CAD vendors, but in Onshape file changes are constantly being tracked and quietly backed-up—you don't even need a save button. 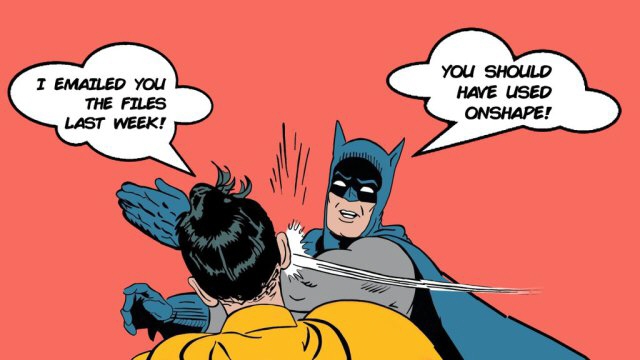 At Develop3D Live this year, Jon revealed some exclusive news about upcoming features, all while keeping his audience entertained with a treasure trove of quotable quips:

"Onshape is only useful if you are working to tight deadlines."

Jon's presentation highlighted how rapidly Onshape is developing—things are moving forward so quickly, that Jon's slideshow was out of date by the time he was presenting it. One slide proclaimed "13 updates since we launched," but just before he arrived on stage, his team had launched version 14.

Here are our favorite Onshape talking points from the conference:

Getting standard parts (like nuts and bolts) into your assembly can be a pain, unless you hand over more cash for a proprietary "toolbox" that doesn't come with your traditional CAD package. Onshape and traceparts have partnered up: enabling you to search, then drag and drop certified parts directly from manufacturers right into your Onshape assembly, without even leaving your browser tab.

An app store for the more specialist stuff

Extra abilities like CFD analysis, and CAM tool path generation for CNC milling are now just a click away, thanks to the new Onshape App Store.

Finding fun in the big data 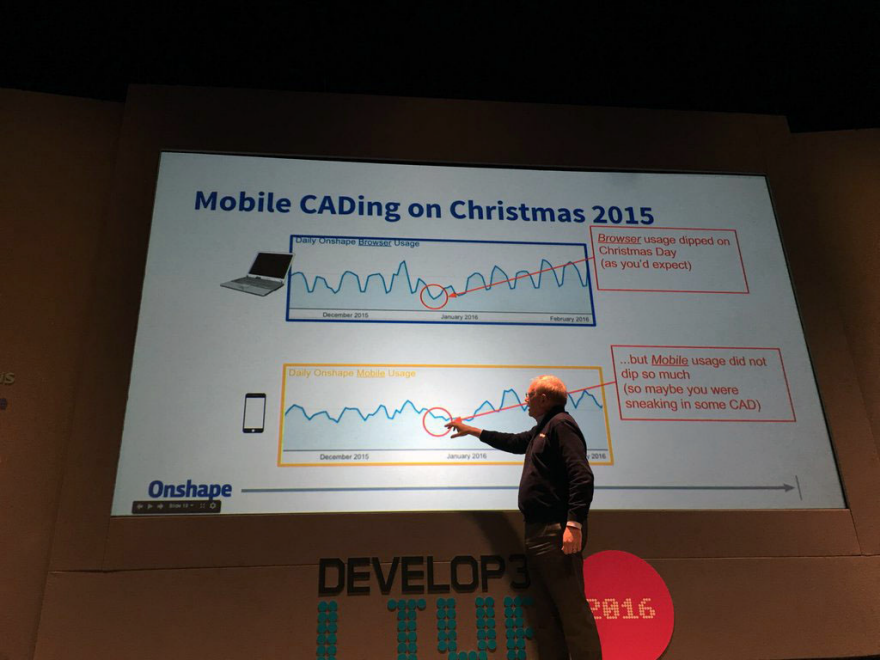 As far as user-centered-design goes, Onshape are not only doing it well, they're also reacting to new insights at the speed of data. Here are some key takeaways from data gathered in the last few months:

1 in 6 Onshape sessions were on a mobile device—actually designing, not just viewing.

Full cloud CAD is very reliable—99.9% uptime, and no crashes (yet)!

People were doing CAD work on Christmas day on their smartphones, get a life guys! 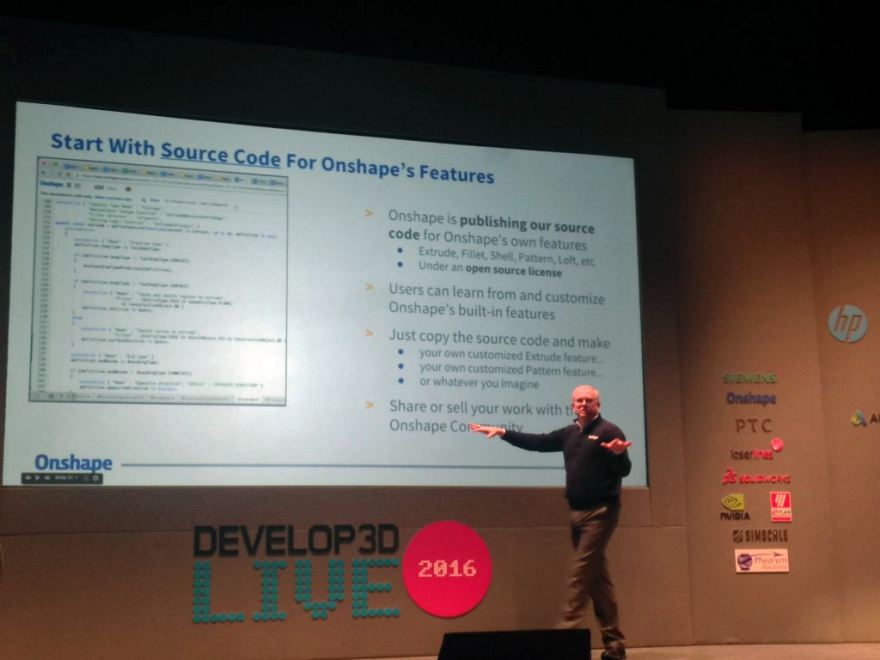 At this point in his talk, Jon did something no self-respecting CAD representative would be caught dead doing: he flipped open the hood and exposed the source code of Onshape's features.

As far as we know, all other CAD companies have embedded the code for "features" (tools like copy and paste, for example) into the very core of their systems. Meaning that any new features added can cause huge problems. This is probably why we only see a small handful of software updates from traditional CAD developers each year.

From the outset, Onshape took the gamble of creating a whole new programming language just for its features, separate from their main body of code. New features can be added extremely quickly, without affecting the day-to-day running of your Onshape environment.

The biggest news of the day: Onshape is going open-source for new features

Yes, you read that right! Have you ever wished for a new kind of feature that would make your work so much easier? Well, soon you'll be able to write the code for new features yourself, and publish them for others' benefit. Cabinet makers and steel fabricators have always made jigs and fixtures to speed up their work, now Onshape is giving the same power to everyday design engineers—and they're calling it FeatureScript.

With such great developments on the horizon, we're sure Onshape can hold their own against the other CAD giants. Keep your eye on them...