The last of our coverage of this year's Develop3D Live conference

In this final wrap-up of Develop3D Live, we examine the latest product offerings from SolidWorks, contemplate the future of connected products with Microsoft's Simon Floyd and finish off with an exciting announcement from Yowza. 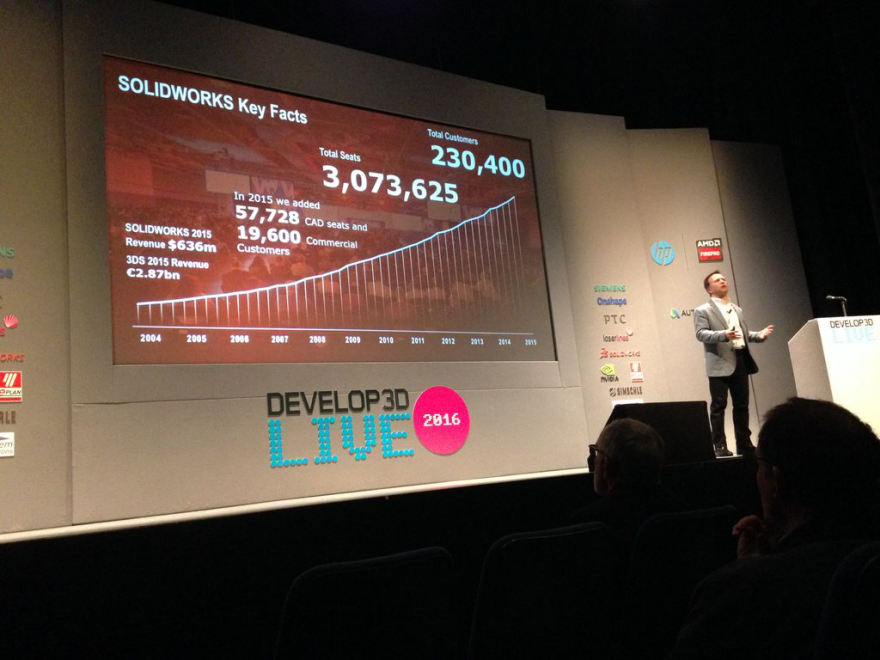 Gian Paolo boasted some huge statistics in his presentation—the company now has over 3 million licenses in use and 5 million people worldwide are actively involved with SolidWorks products. There is no doubt in anyone's mind that SolidWorks is now the juggernaut of the 3D CAD world. 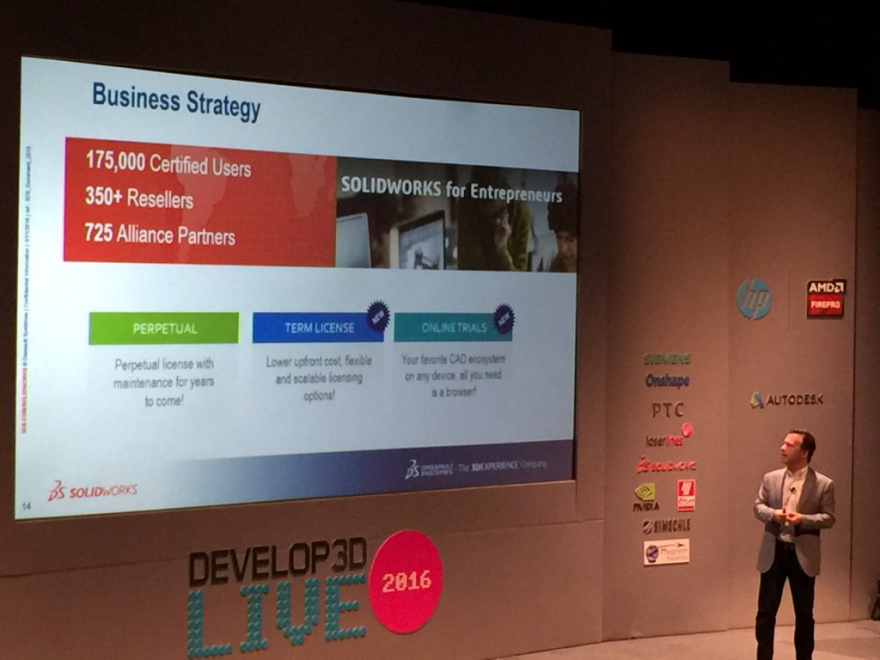 And yet, despite the strong market position held by SolidWorks, startups like Onshape, with their flexible, low-priced monthly subscription, are starting to influence the traditional CAD pricing plan.

SolidWorks has been resolutely traditional in their pricing plan for a long time: you start with a £5,000 one-off purchase of the software, then you're asked to pay "maintenance" fees of around £100 per month thereafter. What's worse, you can't simply buy the 2016 version, stick with it for a few years and then get back on board in 2019—resellers are now enforcing a percentage of back-payments for any missed maintenance fees incurred during those intervening years.

But it doesn't stop there. SolidWorks are also clambering onto another band wagon: the Internet of Things. Connected products are hot right now, and set to become ubiquitous over the next few years. Gian Paolo shared his ultimate goal for SolidWorks: to become the single CAD environment people use to develop IoT products. This means using the PCB design add-on to design both the enclosure and electronic hardware at the same time. 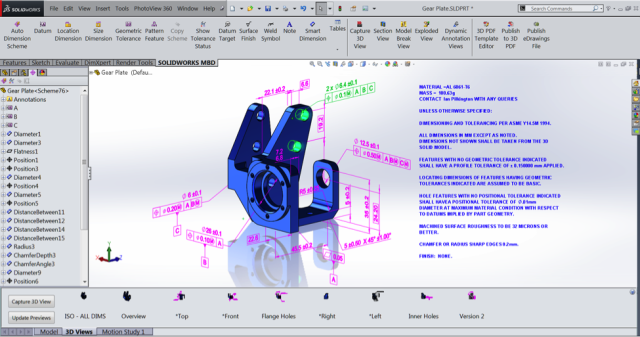 One cool thing that SolidWorks is currently at the forefront of is "Model Based Definition"—adding dimensions, tolerances and notes right into the 3D file, so you don't have to produce old fashioned 2D documentation every time you need to get something made. It looks promising, but we're unsure how it will fit in with ISO BSI 8888 standards. 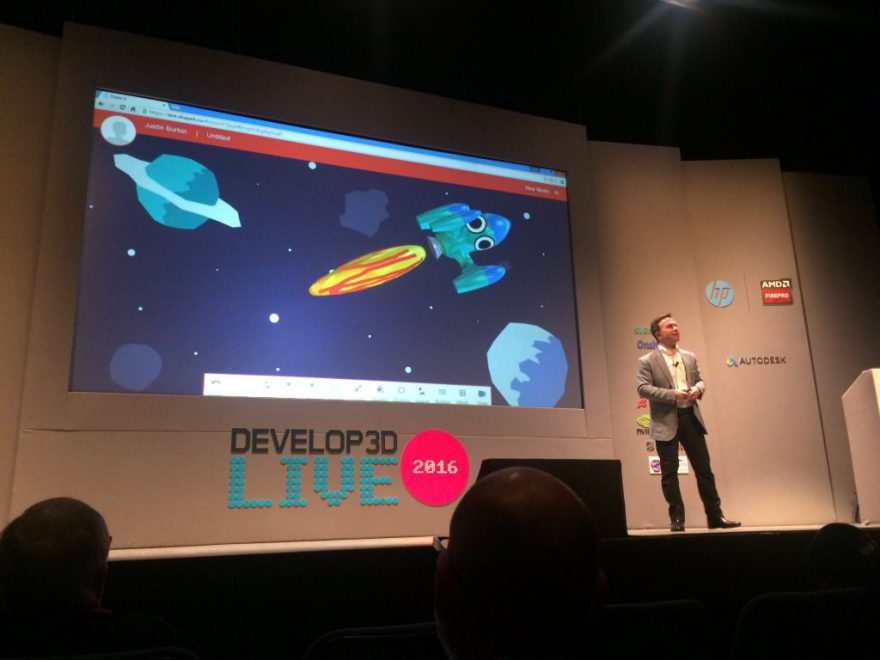 The rest of the talk concerned SolidWorks' commitment to mobile apps. There are too many either in the pipeline or already launched to go through in detail but Gian Paolo was most proud of the new 3D-design apps for kids. While we are familiar with their focus on getting SolidWorks licenses into universities and schools, this takes "getting them hooked while they're young" to a new level. 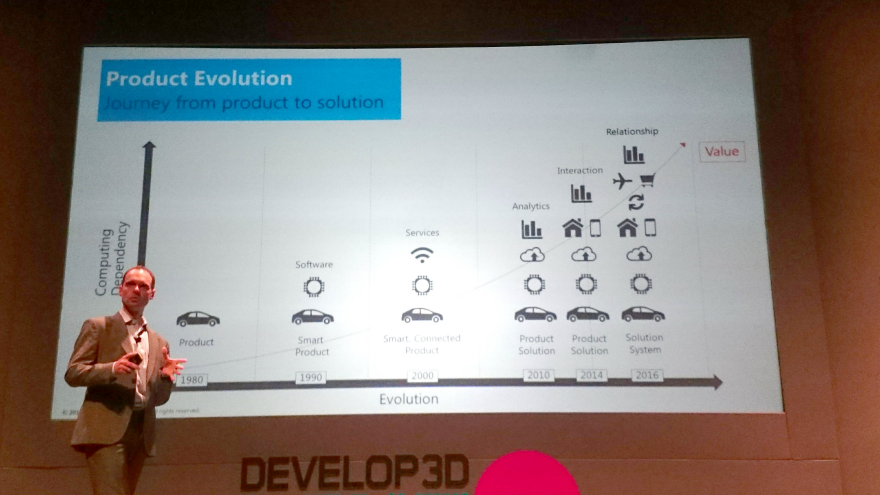 It seems as though Simon Floyd eats, sleeps and breathes connected products.

Floyd's core message focused on user-centered design, on steroids. Instead of launching a product, sending out a questionnaire and talking to users, Floyd suggested we should be automatically improving the design by using the vast amounts of data produced by connected products. After the explosion of IoT products in 2015, Floyd lamented that we aren't taking advantage of these new, rich sources of data:

"Data is fuel for innovation."

Increasingly, products are becoming more than their mechanical parts. Floyd articulated a neat description of contemporary products: "They are a collection of solutions."

He enthusiastically encouraged industrial designers and mechanical engineers to get more involved in the digital aspects of product design, including learning more about data science, sensor design and expanding our interest in the UX/UI digital experience. Ultimately, he noted, if we use the available data correctly, we have the ability to find the missing needs and problems that users may never have complained about —discoveries that could fuel product improvements on a much deeper level.

"Connected product data will help us discover those unarticulated problems." 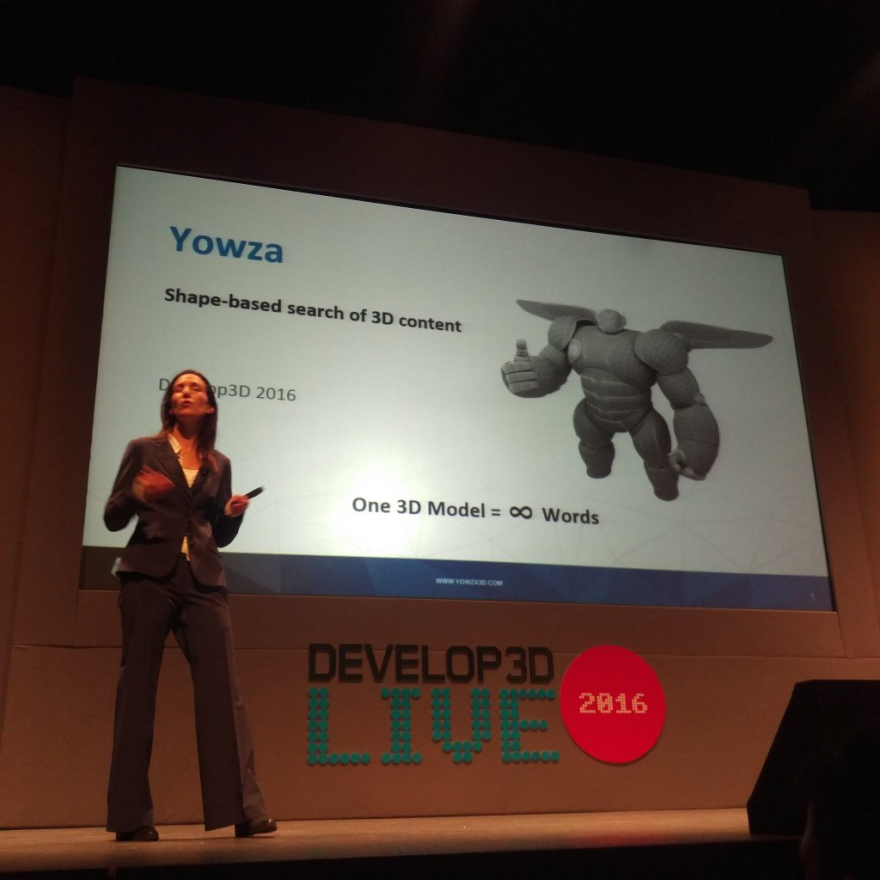 Something a little more light-hearted ended the day: Yowza announced that they are developing what basically amounts to Google's advanced Image Search, but for 3D models. You won't realize how useful this is until you try searching for something on Thingiverse...

Naomi believes text tags and file names are useless, because they rely on lazy humans entering enough relevant information when they first upload a file. Until Yowza goes live, that's all we have to go on—and she's right, it is rubbish. If someone uploads a model of a chair, calls it a chair, and only ever tags it as a "chair," how is someone searching for a "seat" going to find it? And that's even before you consider different languages.

The cool demo that Naomi gave us shows that Yowza have been working hard on some very useful algorithms—this startup is hot, so keeps your eyes on them!

The Latest in Design, Tech and Engineering: A Roundup of This Year's Conference Highlights