The Lasertec 65 can 3D print metal—AND machine it

With laser sintering, lasers are aimed at various points of a bed covered in powder, fusing the powder solid at the point of contact. Once a layer is completed, the bed drops, a new layer of powder is added, and the laser fuses the next layer. Rinse and repeat.

The Lasertec 65 3D machine takes a different approach, using what's called laser deposition welding. In this case the powder is sprayed out of the same nozzle housing the laser, and material is laid down, visually at least, in the manner of a typical fused deposition modeling 3D printer. The Lasertec 65 3D's manufacturer, German-Japanese company DMG Mori Seiki, reckons this is ten times faster than the powder bed method. 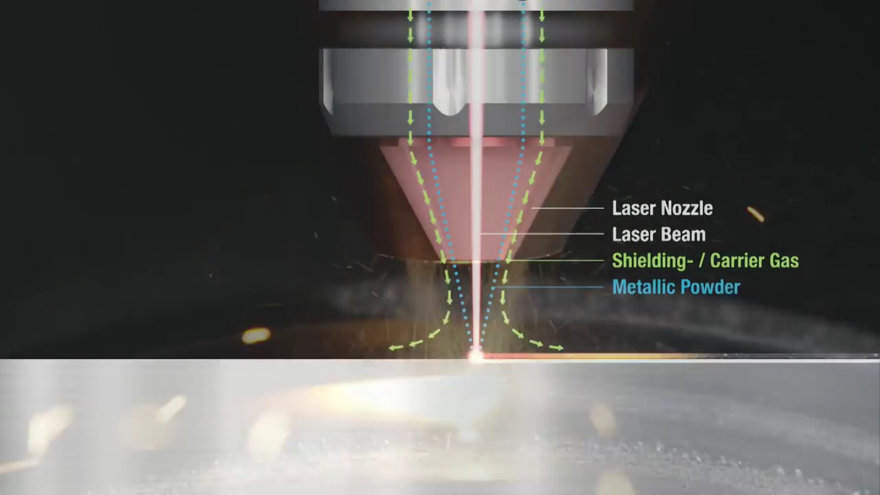 But that's not the crazy part. These engineering maniacs have outfitted the machine (which is five-axis, naturally) with milling capabilities. The toolchanger swaps out the laser for a variety of bits, giving you both additive and subtractive abilities:

This has huge implications for creating parts that were previously impossible, or at least prohibitively expensive, to manufacture. Imagine, for instance, that you needed to create a complicated, hollow metal part where the insides needed to be machined to precise tolerances. Whenever it's impossible to machine the inside of something, i.e. where it is impossible to insert a milling tool, the piece must be made in two pieces and joined together. But the Lasertec 65 3D could do it in one part, by laying down a few layers, switching heads, machining them smooth, switching heads, laying down more layers, et cetera.

The machine also provides a huge benefit for producing more simple parts that would typically be milled from stock: Reduced waste. Imagine machining, say, a spoked wheel out of a solid block of metal, and how much of that block is transformed into shavings. The Lasertec, in contrast, can simply spray down precisely as much as is needed to create the part.