Her illicit 1888 joyride created a sensation around the Benz Patent Model Car. 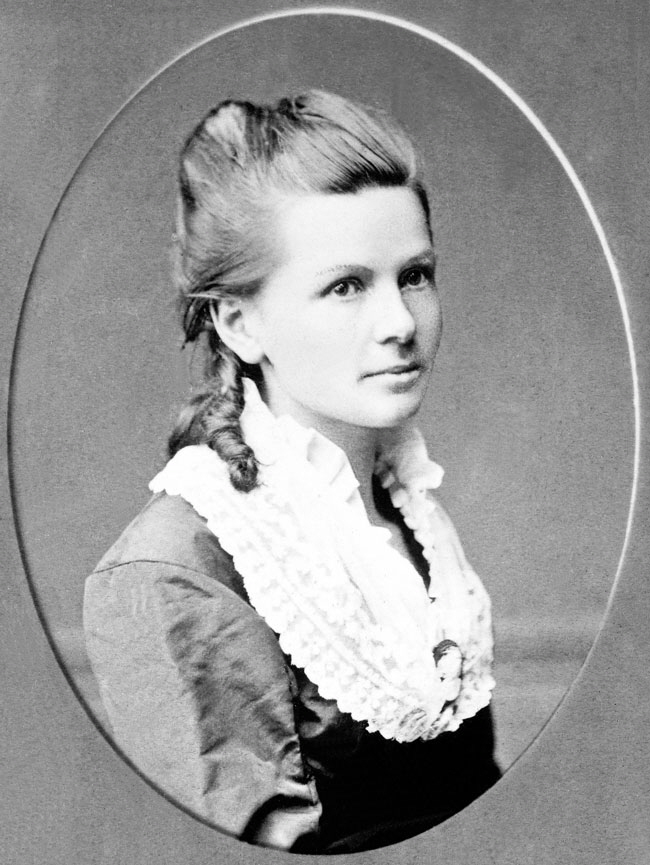 Portrait of Bertha Benz as a young woman. All photos courtesy Daimler AG

In our previous two posts, we looked at some of America's pioneering women of midcentury automotive design. This week, we travel to Europe to explore the story behind an unlikely figure whose early exploits helped shape the automobile for centuries to come.

In 1872, in Pforzheim, Germany, Bertha Ringer married Karl Benz (you might be able to guess where this story is headed). Karl was a mechanical engineer, and although he's credited with inventing the modern automobile, he was a disastrous businessman. Even Mercedes-Benz's own press materials call him "self-doubting, obstinate and sullen." Bertha, on the other hand, was strong-willed, enthusiastic and had complete confidence in her husband's inventions, even going so far as to use some of her own family money to help keep Karl's business afloat. She was intimately involved in his work on a "horseless carriage," which he patented in 1886 as the three-wheeled Patent Motor Car. Bertha joined him in the workshop, sat alongside him for test-drives and acquired a technical knowledge of engines and cars that was on par with her husband's.

By 1888, Karl was refining the third model of his Patent Motor Car, which had a water-cooled single-cylinder four-stroke engine, a vertically-mounted rotary-crank steering device that controlled the front wheel, and an open-top body that was propelled by a meager engine output of 2.5 horsepower at 500 rpm. But Karl's self-doubting kept him tinkering with the car in the workshop, hesitant to share it publicly. Bertha was convinced the car would be a commercial success and simply needed more exposure and a longer test-drive to prove its merits (up until that point the car had only been driven very short distances to poor write-ups in the local paper). So early one August morning in 1888, she stole the Model III and, with her two teenage sons, set out on the world's first road trip, traveling from Mannheim to Pforzheim to visit her mother. It's important to keep in mind just how groundbreaking this trip was: Travel during this era would have been by horse, train or bicycle, and there were certainly no roads meant for automobiles and no filling stations (not to mention the sheer gutsiness of a woman going out for an inaugural spin in 19th-century Germany.) 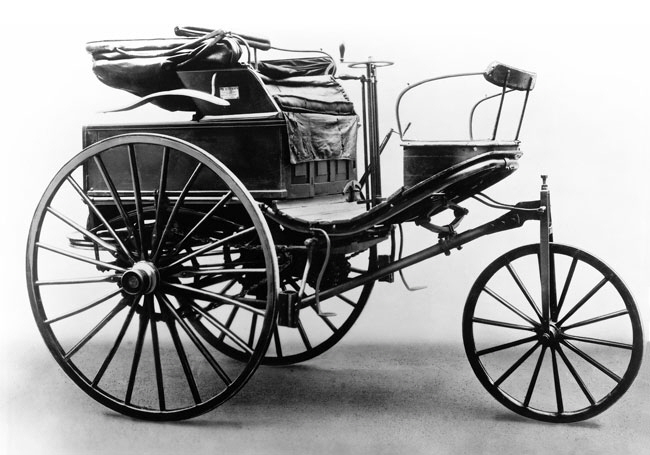 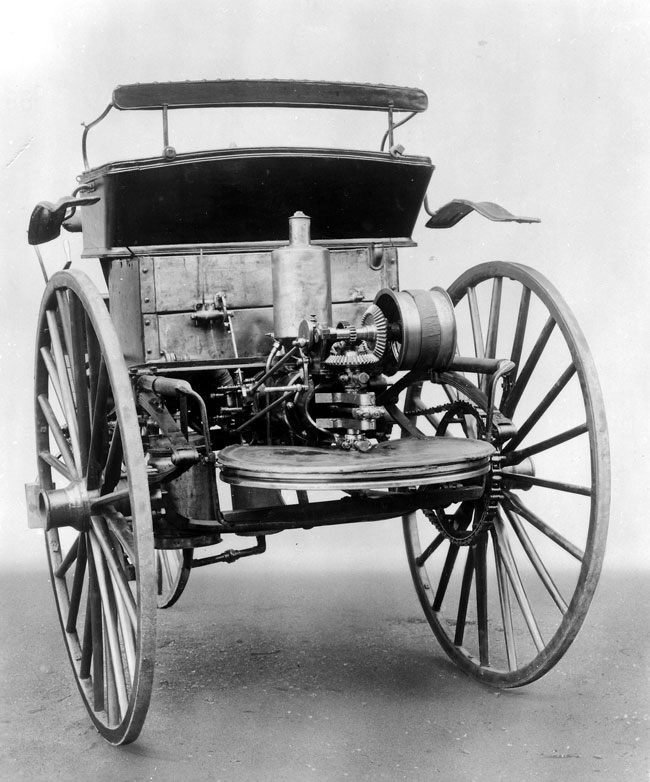 View of the Model III's rear-mounted engine, with an output of 2.5 horsepower at 500 rpm

Bertha's furtive trip revealed a number of obstacles for modern motoring, and a number to drawbacks to the Model III's design. Since there were no gas stations, she stopped at pharmacies along the way to fill up on ligroin, which the car used for fuel (her initial stop, a pharmacy in Wiesloch, Germany, later became the world's first filling station). In addition, she had to stop frequently to refill depleted water tanks that kept the engine cool, and it was lucky she had enlisted her sons to accompany her on the 65-mile journey, since the car needed to be pushed up hills due to its lack of gears and puny engine. Bertha also made a number of ingenious fixes along the way, the most crucial being the invention of the first brake lining, which she commissioned in leather from a cobbler to cover the failing wooden brake shoes. She also cleared blocked fuel lines with a hat pin and insulated a worn-through ignition wire with a piece of her garter. After Bertha's test-drive, Karl also added a lower gear to the car to help it on steeper grades. 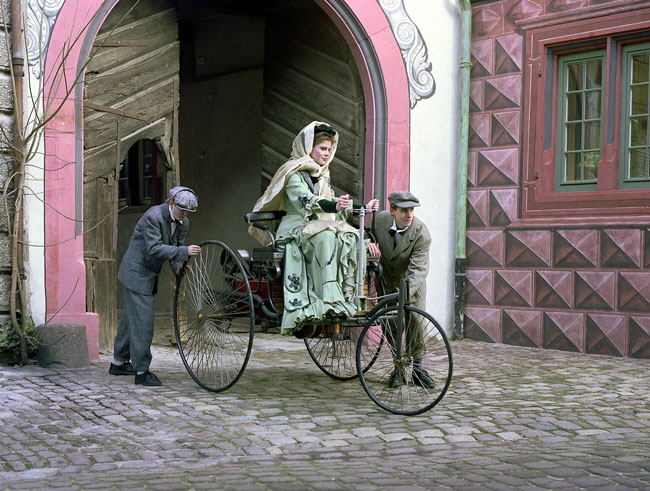 A reenactment of Bertha Benz and her sons Eugen and Richard push-starting the car, performed as part of the 100th-anniversary celebration of Benz's long-distance journey

The route map of Bertha's journey from Mannheim to Pforzheim

Bertha's joyride created a sensation around the Model III, and her efforts secured Karl's place in history books as the inventor of the first commercial automobile powered by an internal-combustion engine. Originally about 25 Patent Motor Cars were manufactured, but after Karl teamed up with the French engineer and designer Emile Roger in Paris to sell the cars abroad his fortunes changed and his company Benz & Cie became the world's leading car manufacturer. According to the London Science Museum, which owns a slightly later four-wheel model of the car, by 1896 Benz's output exceeded carmakers in both Britain and the United States. Karl Benz died in 1929, but Bertha lived to the ripe age of 95, passing away in 1944. Luckily, Bertha's trailblazing ride became part of the Patent Motor Car's lore, and her spirit has been kept alive in Germany, where today you can make your way down the Bertha Benz Memorial Route, take part in the Bertha Benz Challenge car rally and watch a campy historical drama based on Bertha's and Karl's lives. 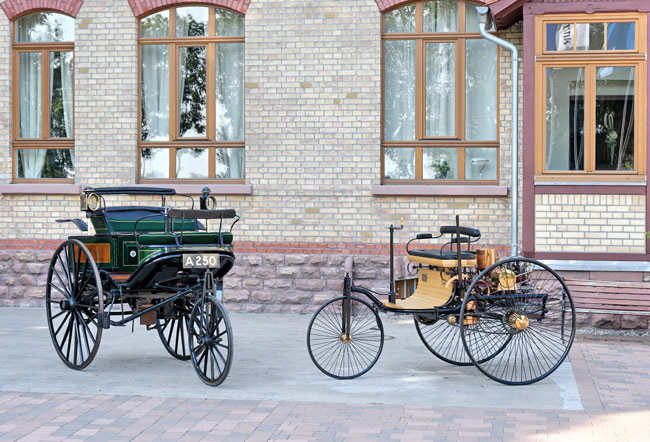 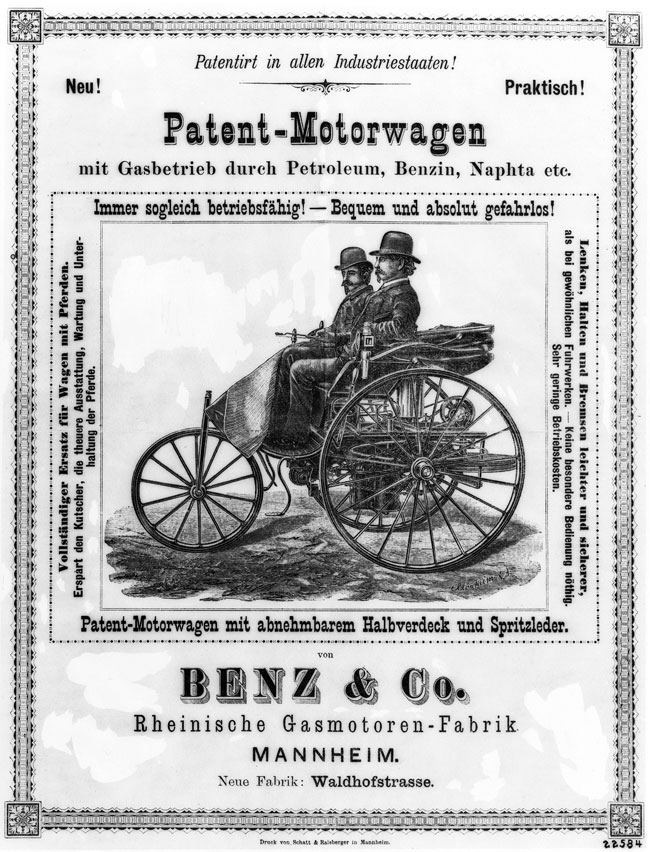 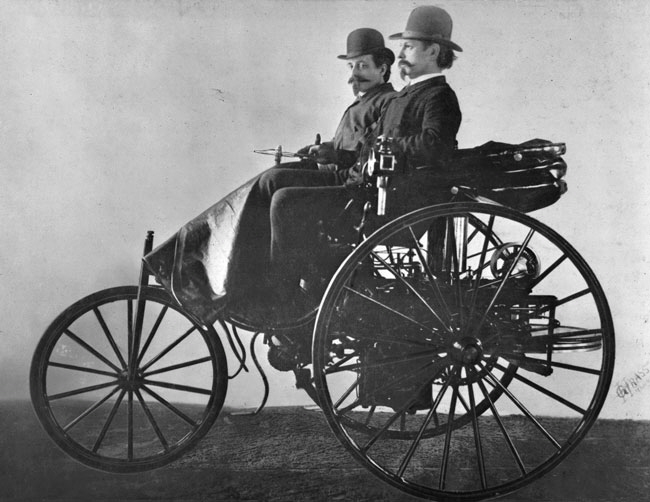 Karl Benz (in foreground) at the wheel of his Patent Motor Car Model III with Friedrich von Fischer,  a member of the board of management of Benz & Cie 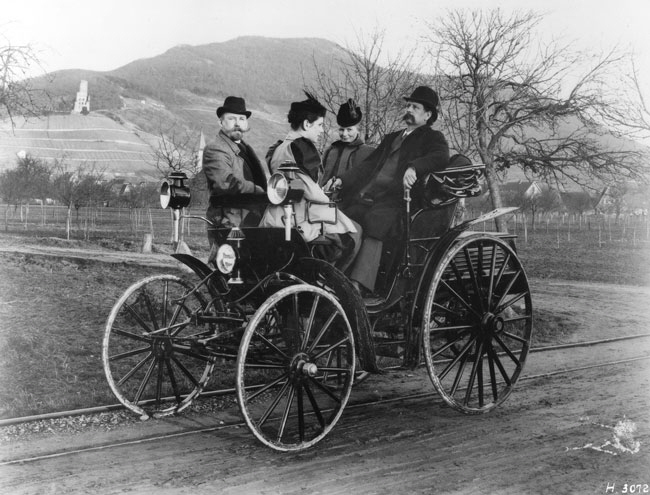 Karl and Bertha Benz, their daughter Klara, and Fritz Held traveling in an 1894 Benz Victoria

This was the latest installment of our Designing Women series. Previously, we profiled Suzanne Vanderbilt, a pioneering auto designer at GM.