Welcome to the second edition of the Drafting Table Quarterback. In this series, we tear down a product and analyze it from an Industrial Design perspective. In this edition, by popular demand, we are tearing open the new Beats Pill Plus. 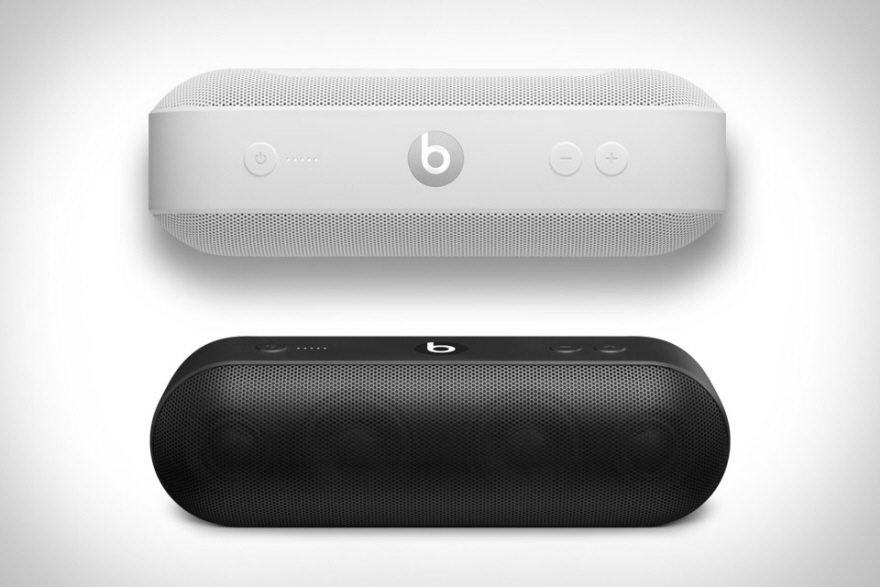 I know this is a teardown article but when considering a product, branding is always a consideration. Beats has established its brand around personality and perceived exclusivity. I say perceived because, although $200 for speakers is not a bargain, we are not talking B&O pricing either. Brand expectations have a strong influence on the design choices that are made. As you will see, Beats is no exception, but first, a little technical background on speaker design.

There is great deal of science and engineering that go into speaker design. I won't pretend to be an expert. As a designer, there are a few basics you should know about speaker design. There are three basic construction techniques: Sealed, Ported and Passive Radiator designs.

Sealed speakers are just that. The speakers are in a seal box that has no opening to the interior chamber. Generally speaking, sealed speakers give a more crisp, punchier sound. That assumes the speakers being used are not tiny. There is only so much "punch" a 1.5" speaker can generate.

Ported speaker designs are not sealed and have a port (tube) on the interior of the sound chamber that is tuned to the speaker and gives a much deeper tone to the low end of the sound frequency. Ported designs require more math and precise engineering. Bose has mastered the ported speaker design and do it to the extreme where practically the entire sound chamber is a giant port. It allows them to generate much better sound from small speakers. The down side, beyond the brain power to design them, is port. If you are designing weather-proof speakers, putting a big hole in the sound chamber makes it physically impossible to keep the water out.

To get the best sound out of a set of speakers, that sound chamber needs air volume that matches the speakers. Also, one speaker is not going to be able to produce a complete range of sounds across the entire audible frequency range. Typically, speakers are used in pairs. One small speaker designed for high frequencies and one larger speaker for mid and low frequencies. High end speakers might even separate the mids from the low frequencies. The electronics used in a paired speaker design include a crossover, which separates the audio frequencies so that the speaker only receives the sounds it is design to produce. So, the tweeter is not sent the bass notes and and sub-woofers are not sent the high notes. This creates a cleaner sound as the speakers are not trying to produce sounds they are not designed to make. Add to that the vast majority of speakers are also paired as left and right sets. 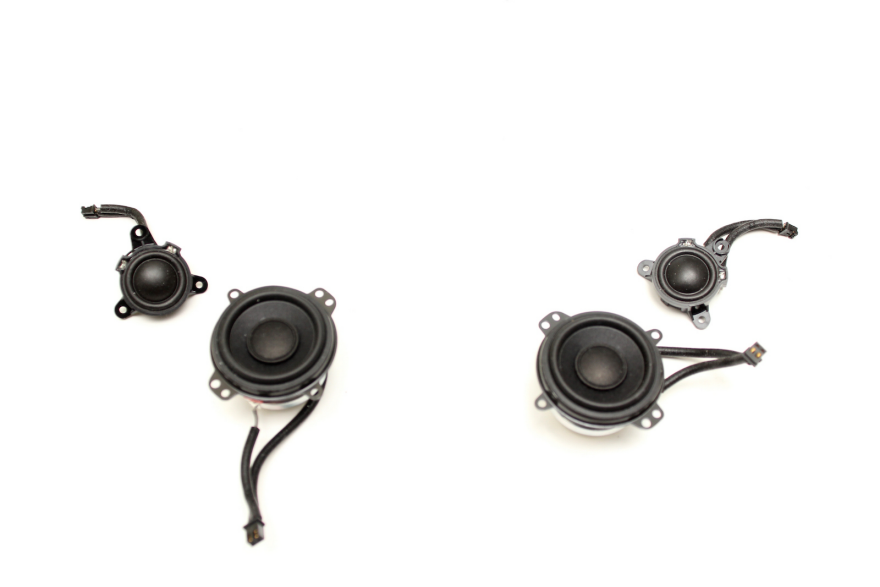 Four speakers from the Beats Pill Plus are encased in a sealed chamber.

In the case of the Beats Pill Plus, there are 4 speakers in a sealed sound chamber. There are two tweeters and two subwoofers. One each for the left and right channels. The Beats Pill Plus uses a sealed chamber. This allows it to have smaller speaker cabinet design than a design with passive radiators. It is also weather-proof unlike a ported sound chamber. Does it have the same sound quality of a product with larger speakers, a passive radiator, or a port? No, and you will not see it on any list of the best bluetooth speakers. They are not bad…they are just not great either. 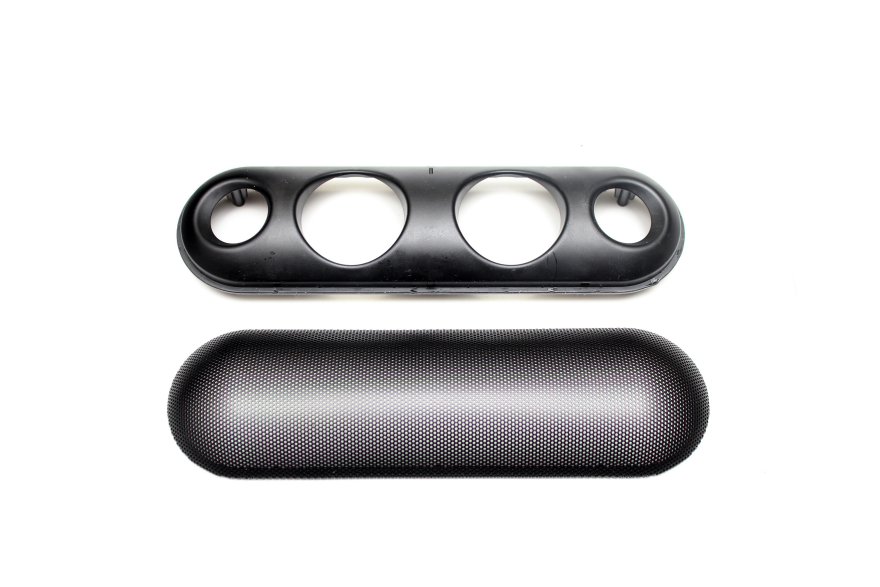 Portable music listening devices have changed a lot in the last 30 years. The obvious changes can be found in the technology. Lithium Ion battery technology has dropped the size and weight while eliminating the need to have removable batteries. Bluetooth technology and the change from physical media, like cassettes and CDs, to digital media have removed the need for many mechanical components. 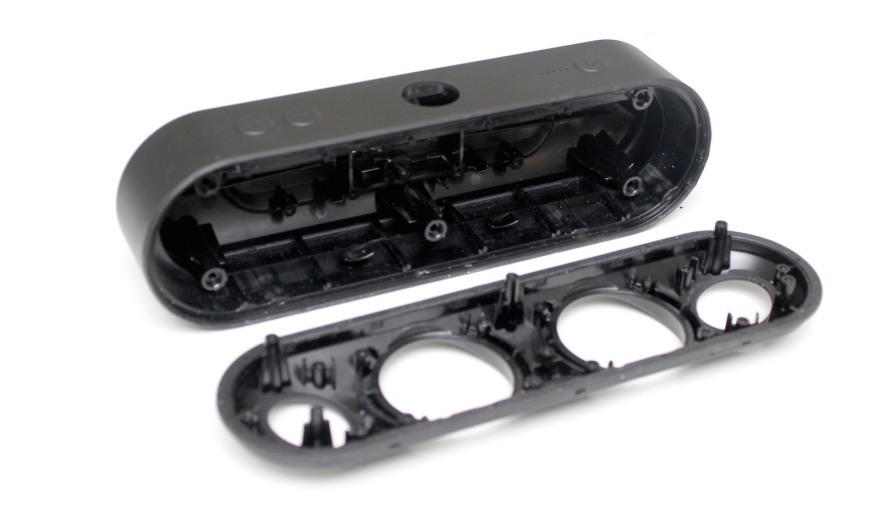 As mentioned, speaker technology has also came a long way. One of the most interesting changes is less obvious. It is a change in mentality. Throughout the history of product design there has been one constant. Every designer has accepted the fact that a product has an ugly side. Even the cordless drills from our last tear down had one side that was riddled with screw holes. Boomboxes from the '70s and '80s were designed nearly in 2D with a large overly designed front surface painted silver surrounded by five other unpainted edges seemingly overlooked by the designer. If you examine nearly every bluetooth speaker on the market, you will be hard pressed to find an ugly side. You will also be hard pressed to find a mechanical fastener.

The designers of the Beats Pill Plus went out of their way to hide the fasteners. There are 40 screws that hold it together, none are even remotely visible. Behind the metal grill on the back is a rubber component with no other purpose than to hide any semblance of mechanical reality. The fit and finish is really nice, or it was, because it will never recover from the abuse I subjected it to while disassembling it. 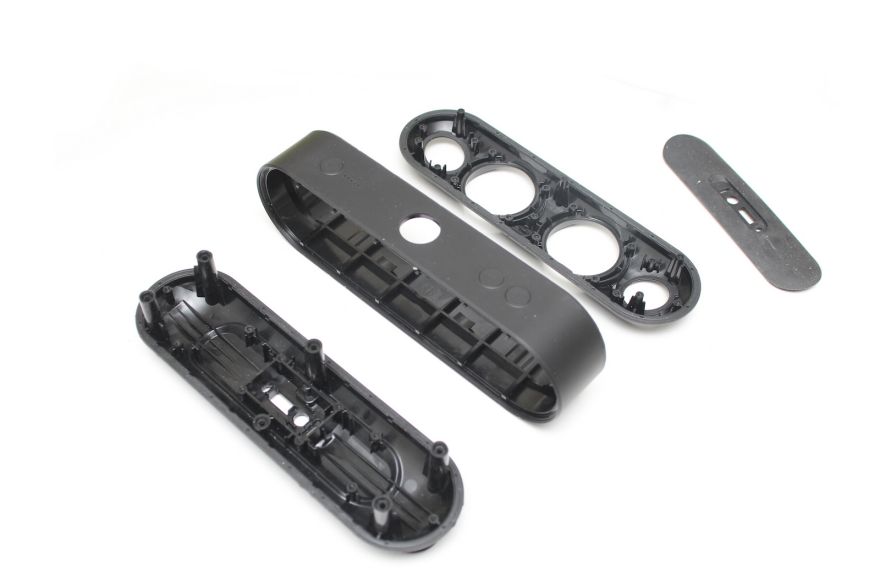 If I took a second one apart, it might fair better. That is because Beats managed to conceal construction techniques so taking it apart required a fair amount of trial and error. I know what you are thinking—what is the big deal? They hid some screws and didn't cheap out on engineering or tooling. The big deal is all about impression. When you hold the pill, it is heavy, solid and seems less constructed than carved out of stone and coated in soft skin. If Beats had left any manufacturing detail uncovered, the illusion would be ruined. This is the difference between designing for manufacturing, and designing for experience.

When designing speakers, your biggest enemy is vibration. Sound is vibration. So while the cones of the speakers need to vibrate, the last thing you want is that vibration to cause more vibration. That secondary vibration would be transmitted as hums and squeaks. 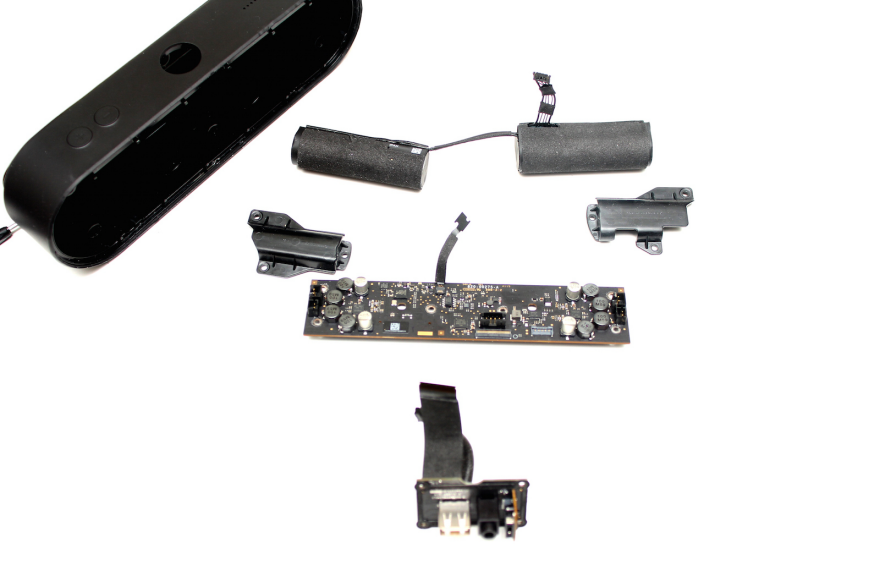 Components are wrapped in foam to prevent secondary vibrations.

To that end, you will notice that the metal grills, batteries and wires are wrapped in foam. The housings, buttons and PCB have rubber gaskets where they connect to each other. These features exist to dampen any vibration that might happen and to seal the speaker from the elements.

The center ring housing is co-molded ABS and TPE (rubber). The TPE covers the entire outer surface of the Beats Pill. This serves several benefits: 1) It feels nice when you hold it. 2) It hides any imperfections in the ABS plastic. 3) The TPE acts as a grippy surface to hold the Beats Pill Plus in place and to prevent it from vibrating on your table. 4) It acts as a living hinge for 3 of the 4 buttons. 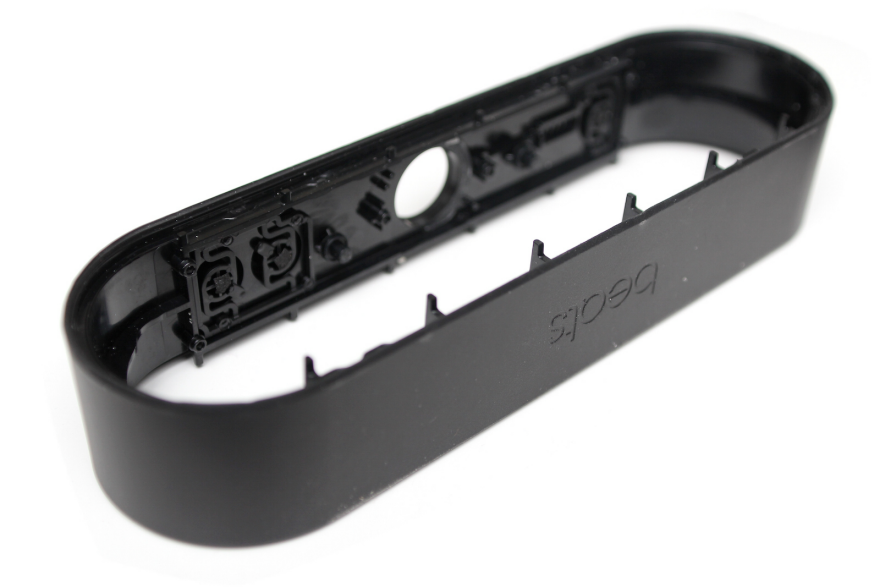 The center ring housing is co-molded ABS and TPE. 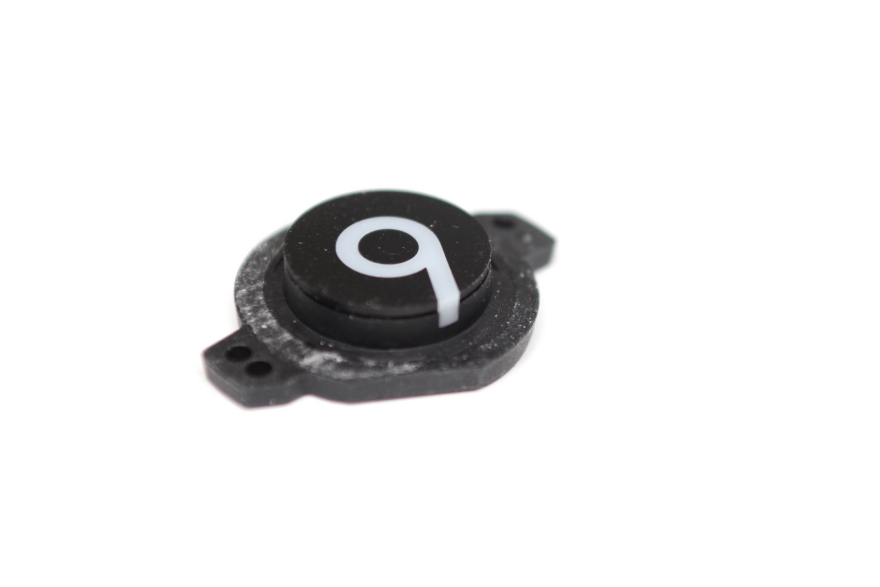 The Beats "B" button is different than the others. Someone insisted that the B illuminate when powered on. To make this happen, the engineers had to do a little more work and spend a little more money. The button is made from three materials and four components. There are three ABS components and a TPE component. These components appear to be snapped and glued together. The TPE component is used to seal the gap between the button and the housing. The button is also sealed to the housing with double-sided tape. Being a round button, if not designed correctly, it would be easy to insert the button in the wrong orientation. To make sure the buttons are inserted correctly every time, the TPE component of the button has two wings with holes in them that are registered to posts on the housing. The wings and holes are such that there is only one way to insert the button. It is a minor detail, but without it, placing the button so the B is not at the wrong angle would be nearly impossible. 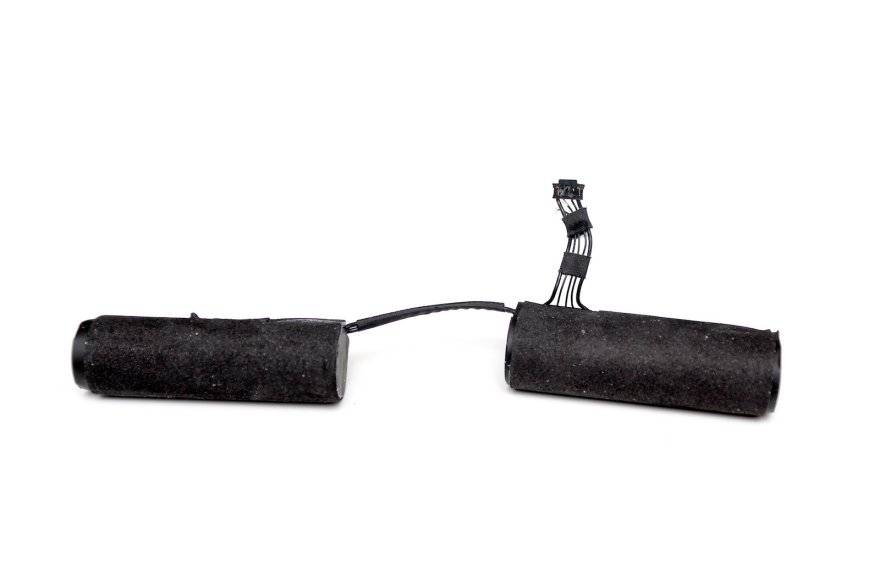 Speaking of connectors, I broke one taking it apart. I got a little impatient and my eyesight is not what it used to be and I broke the connector that links the batteries to the main PCB. It is a tiny connector certainly not made by human hands and it is not going to be fixed by my fat sausage fingers. Now, where is that receipt?

In this picture, you can see just how small it is. 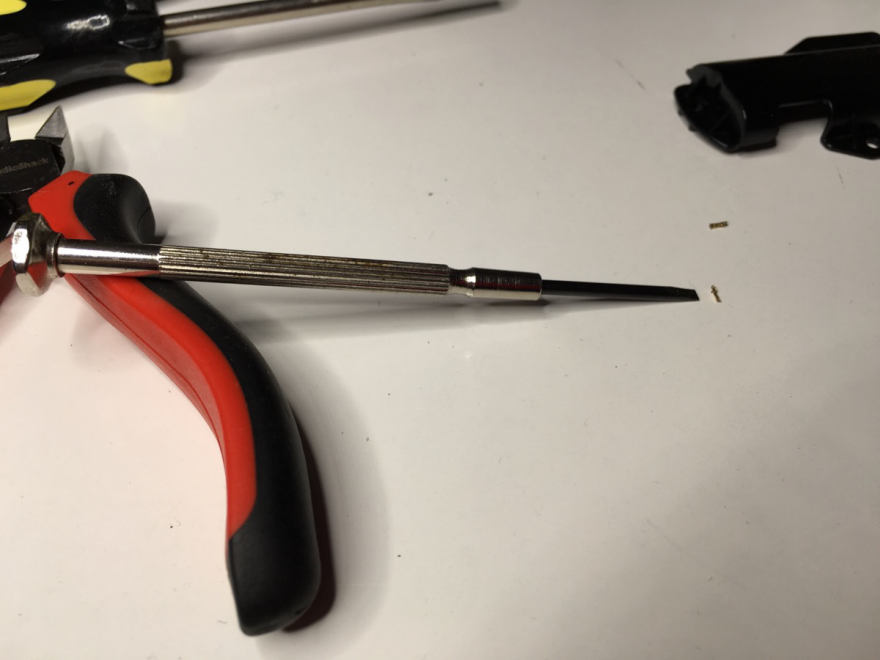 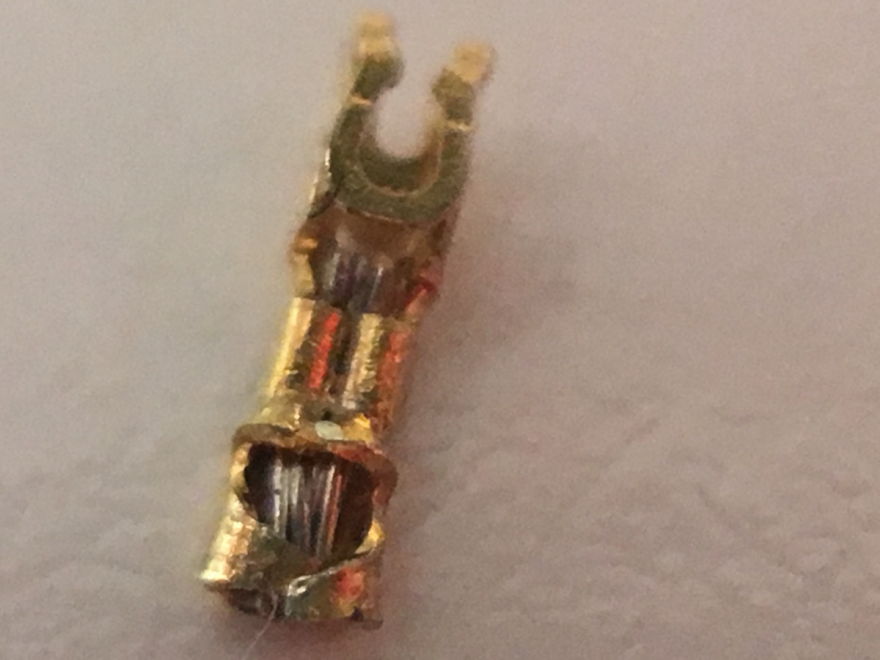 Macro Shot of the connector

If you look at the center housing you will notice that along the top and bottom there are rows of posts sticking out. There are also some screw bosses that hold the main PCB but none that connect the center ring to the front and back housings. 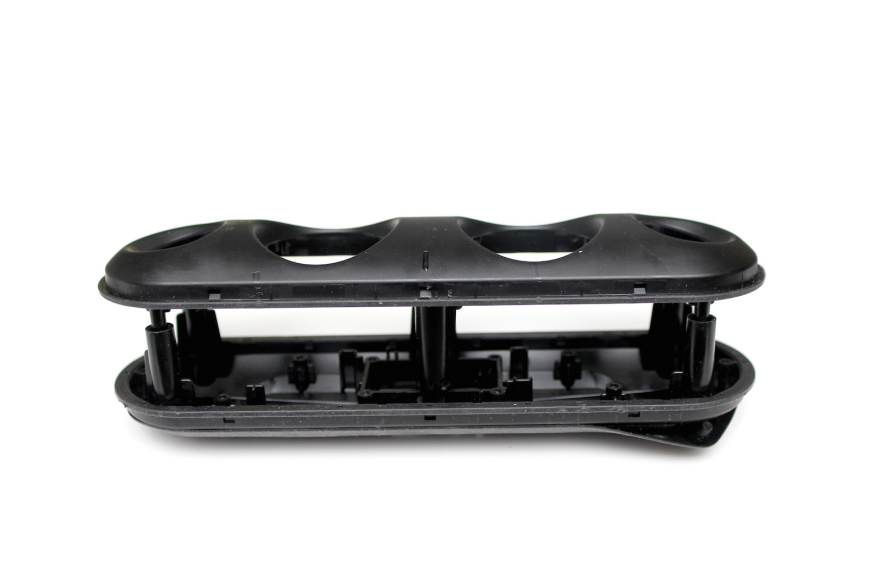 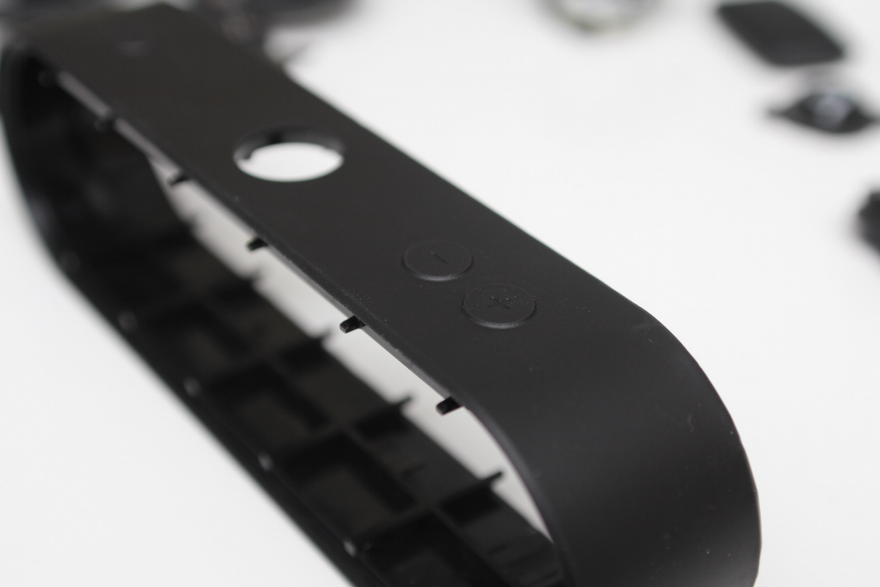 Since the front and rear plastic parts are covered by the metal speaker grills to the very outer edge, the only visible seams in the product are between different materials: Metal to TPE and the TPE to the polished B button. By NOT having two parts that were made with the same material visually touch, it reinforces the feeling of solidity and minimalism. That reduction of perceived parts is so Apple.

If anything marks the change between the Beats Pills of the past and the first one designed after being bought by Apple, it is that minimalization of the product. They honored the history and brand but pushed away all the unnecessary detailing that seemed to exist only to hold the products of the past together. Is it the best bluetooth speaker on the market? Not even close. Is it a beautifully considered and thoughtful product? Absolutely. I just wish I could get it back together. :( 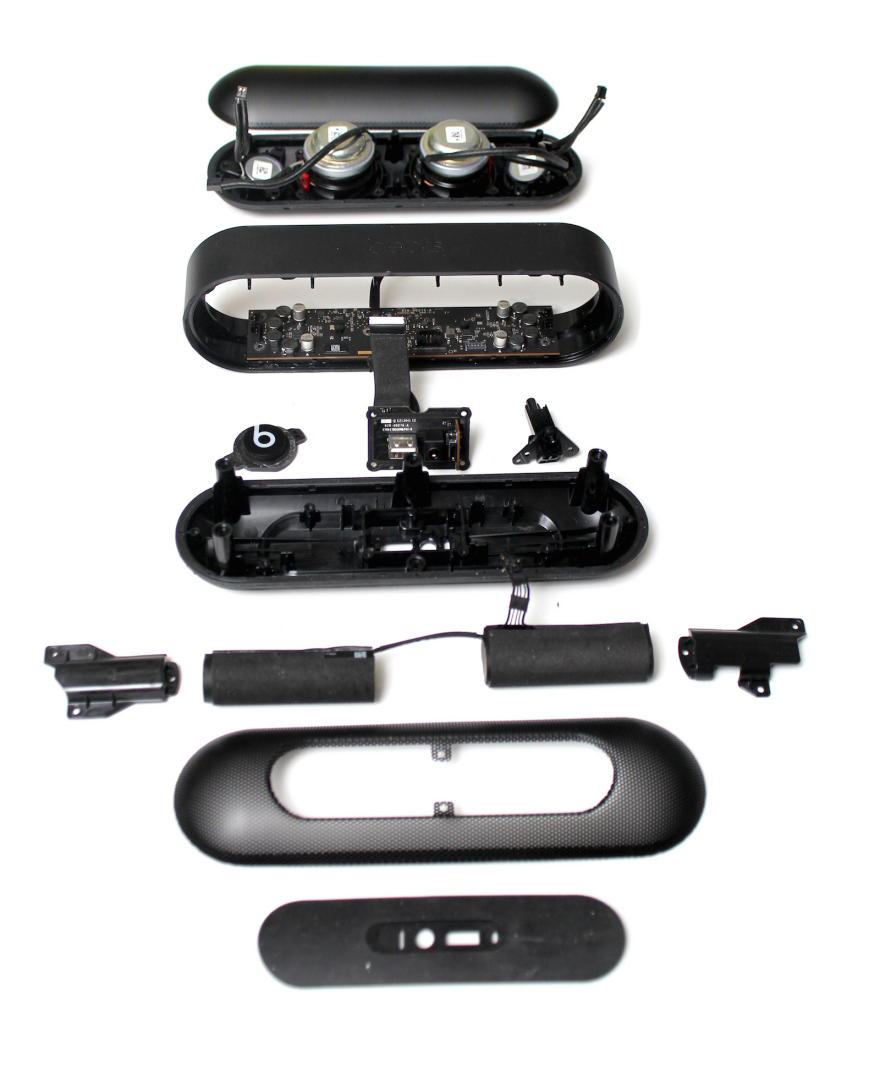 You may have noticed the barcodes on all the internal parts, check out this post on Apple's Liam robot that disassembles Apple iPhones. Liam scans these bar codes as a part of the disassembly process. The barcodes are likely for both assembly and disassembly, assuming they sell enough to recycle them in mass, like the iPhone.