A wise word of advice to all makers:

These words could easily be the mantra of a small furniture studio or pinned to the inspiration wall of a product designer working at Apple. What might surprise you is this sentiment originates from the Shakers, a spiritual sect who made impeccably crafted objects beginning more than 150 years ago. The work of these visionary minimalists are the starting point for a new exhibition taking place during New York Design Week at Sight Unseen's OFFSITE, "Furnishing Utopia"— a collection of Shaker-inspired furniture and objects by 12 design studios from around the world. 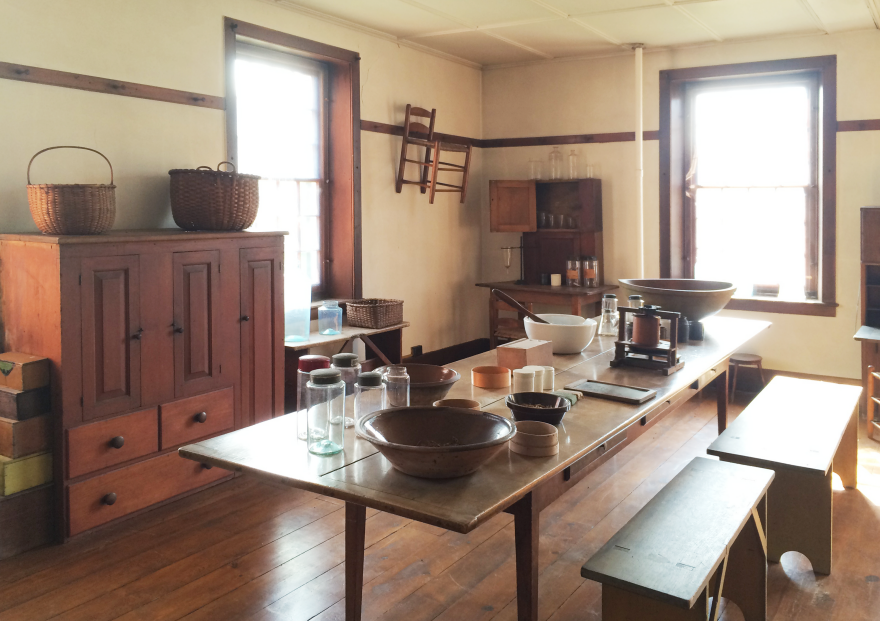 All images courtesy of John Arndt.

A religious group who fled to America in 1774 from England, the Shakers were a community with a fierce dedication to craftsmanship. Their drive for minimalism, as Collections Manager and Curator at Hancock Shaker Village in Massachusetts Lesley Herzberg shares, came from their focus on work as a form of worship: "The Shakers made a chair with the idea that an angel could come perch on it." It also had to do with the idea that working as a community was crucial for survival, and so each object and design detail should be considered to "make their lives more comfortable in some way. There were very simple things they would do like rounding the handle of a pail on the underside so that it kind of conforms more to the hand and makes it more comfortable to carry," says Herzberg. Their search for godly perfection would go on to inspire iconic modern designers like Hans Wegner and George Nakashima for their specific focus on creating objects for the purpose of making life better, more efficient and, yes, also more beautiful.

The Shakers made a chair with the idea that an angel could come perch on it. 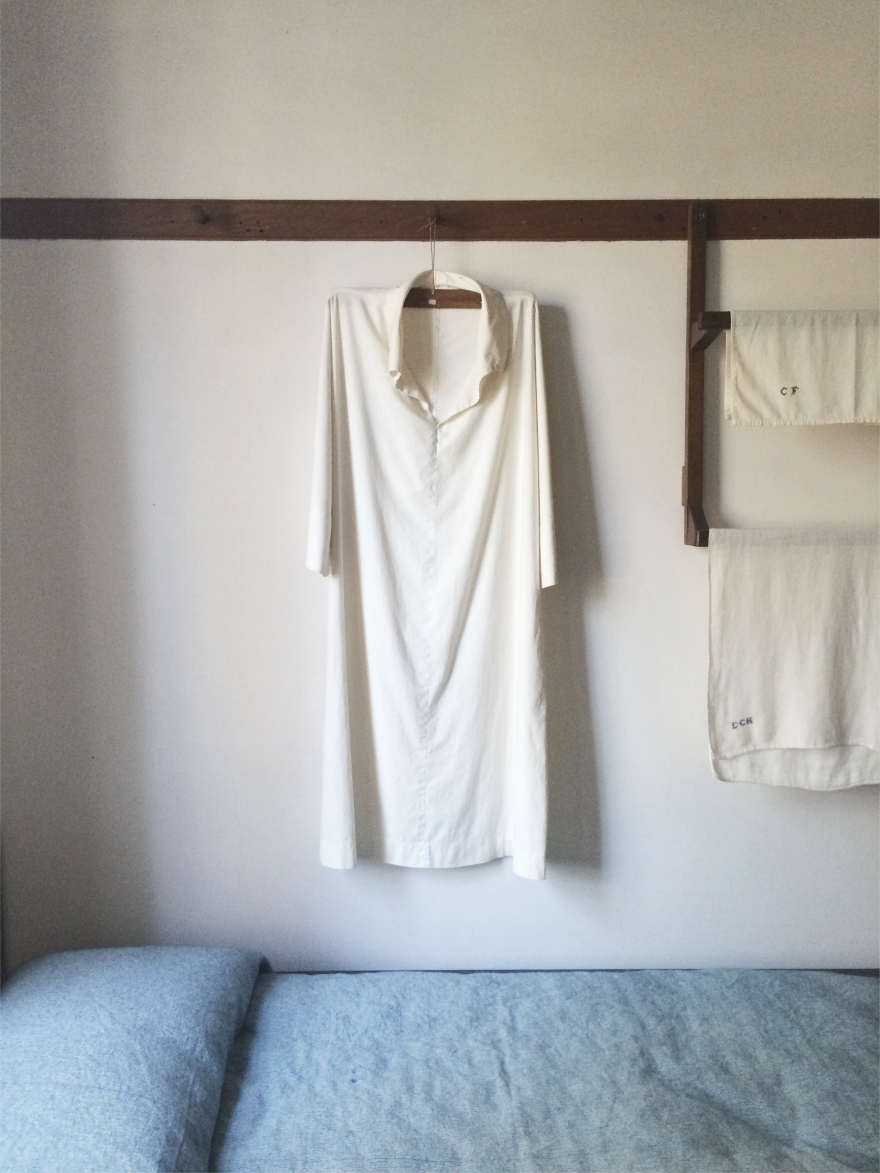 One example of the Shaker's famous peg rail system.

John and Wonhee Arndt, the designers behind Oregon-based Studio Gorm, both became well-aware of these parallels between modernism and Shaker principles after spending a large amount of time over the past few years researching the culture. "We were really inspired by the Shaker peg rail as a starting point for designing furniture," says Arndt, "[which] led us to want to learn more about the Shakers." After taking a Northeast road trip to check out landmark Shaker sites, they were quickly introduced to Herzberg at Hancock Shaker Village and began brainstorming a potential project to work on together. Herzberg had also been searching for an opportunity to share these objects in a new light, to "let it speak to a new generation."

The conversations resulted in a two week workshop last September at the Hancock Shaker Village site. "The brief was to find objects in the collection that inspired them and to reinterpret them in a contemporary context...the group was given a crash course in Shaker culture and life. We went in attics and basements, store rooms and were able to closely study objects first hand," Arndt states, also mentioning how rare it is for designers to get to closely inspect historical objects such as these Shaker relics. 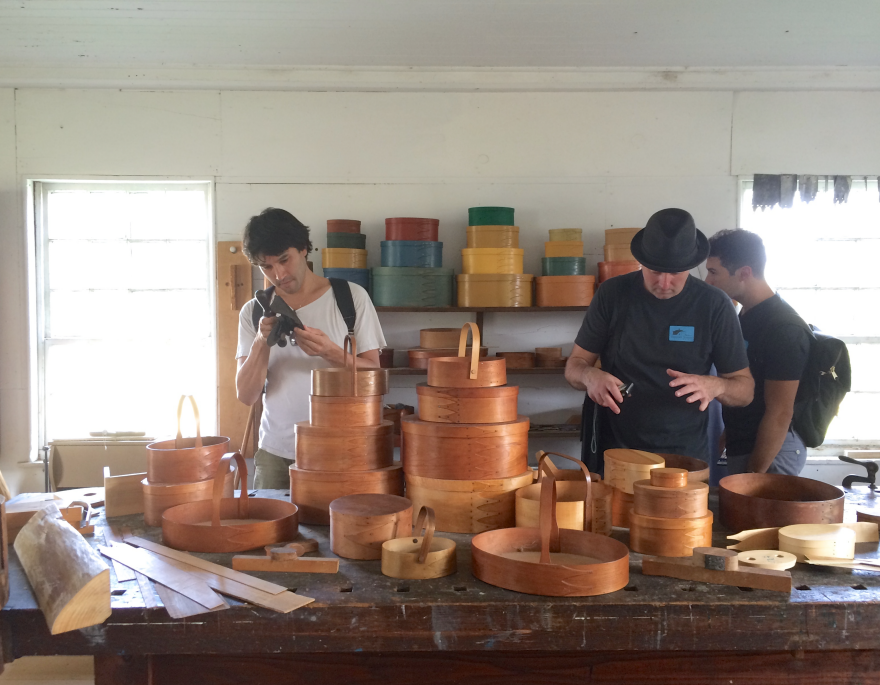 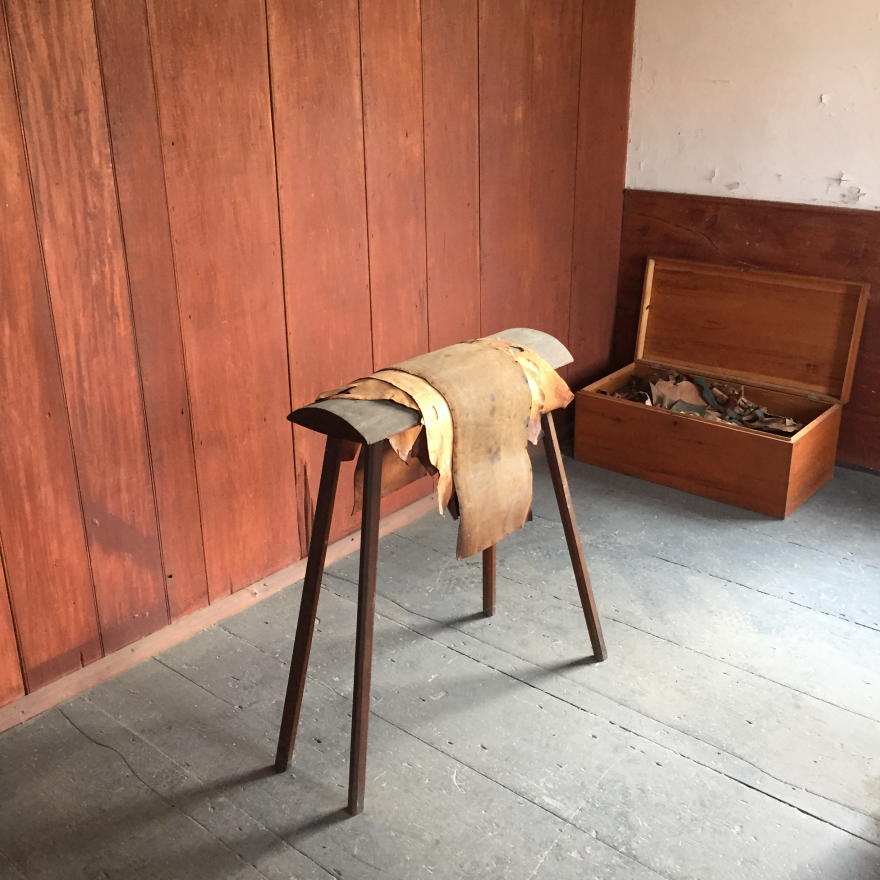 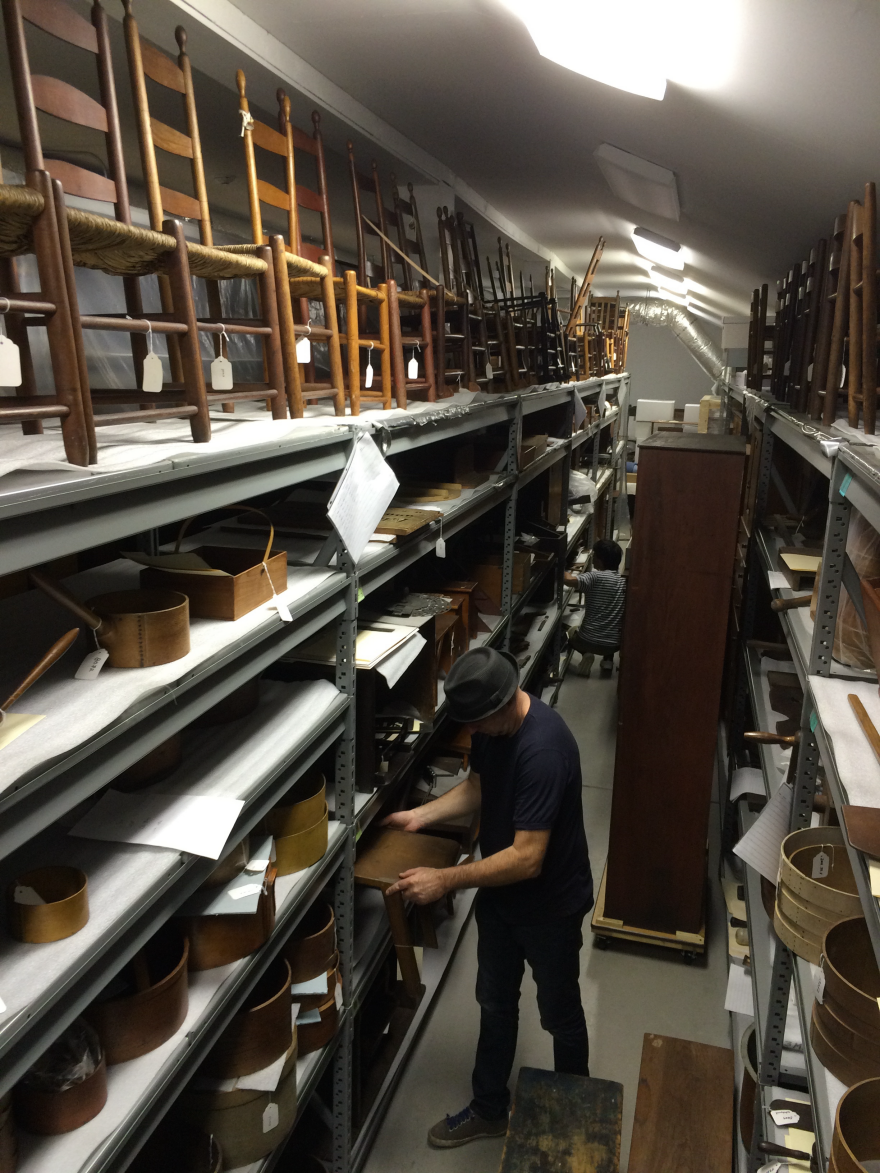 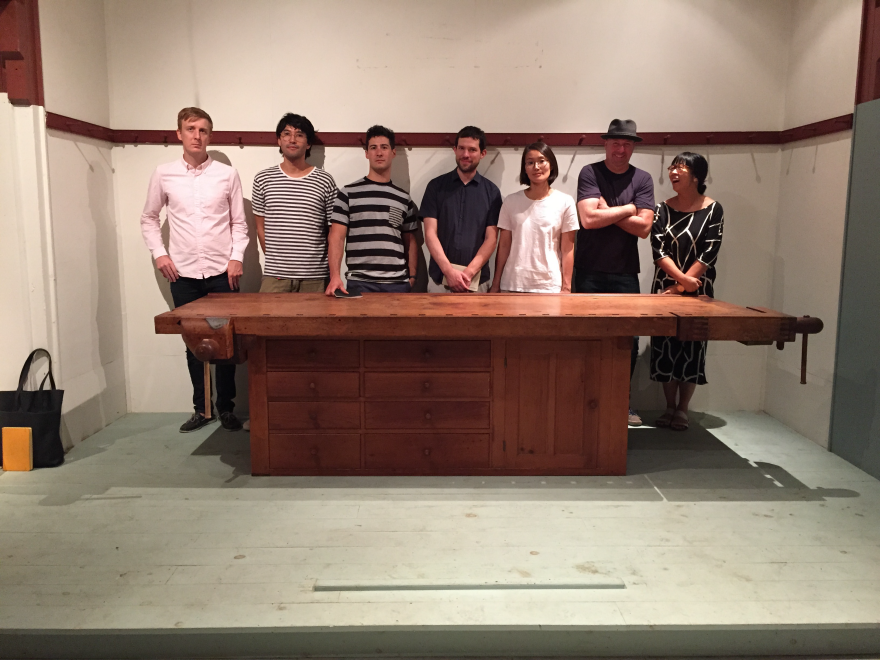 Designers were exposed to classic objects one might instantly recognize as Shaker design, like peg rails and rocking chairs, while also running into some lesser-known tools and utensils Shakers created for their own daily use—Arndt says, "they were often very simple with a craftsman's logic in their construction, but with an exceptionally fine sense of proportion and made exceedingly well". 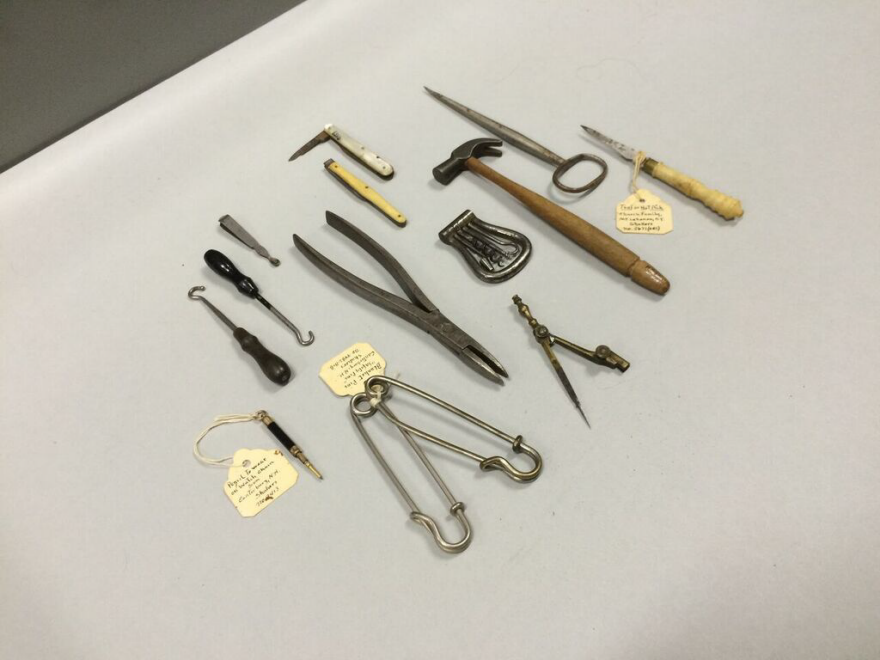 Ultimately, some designers chose objects directly from the collection while others found Shaker values themselves to be the most inspiring aspect of their research. Collaborating designer Chris Specce told Core77 that for him, "the Shakers are inspiring because they were concerned with form as an expression for their beliefs, but also in the way they ritualized the activities of daily life," which ultimately inspired the form language for his final designs.

All the designers involved in the project were equally inspired by the Shaker philosophies they learned about as they were with the technical knowledge acquired after designing their final products. Jean Lee and Dylan Davis of Ladies & Gentleman Studio, contributors to "Furnishing Utopia" noted that, "Shakers believe making and being productive was a higher calling, something to be enjoyed and celebrated... All too often we get wrapped up in 'saving time' but we miss the point of valuing the process of creating." For busy designers today, having the time to work on something and make it truly 'perfect' may be impossible, but as we can learn from the Shakers it doesn't mean we can't allow ourselves to get lost in the moment and give equal, careful attention to design details both big and small.