The I-1 melds analog and digital technologies

When Polaroid announced the end of instant film back in 2008, the Impossible Project took up the task of breathing new life into instant film photography. After stepping in to buy the last remaining Polaroid factory only days before it shut its doors, the company has been committed to reinventing instant film, bringing back a range of older models with a modern twist.

Their latest effort is no exception. This time around, Impossible Project teamed up with Teenage Engineering to design a brand-new camera from scratch. Released earlier this month and now available for pre-order, the I-1 is an analog, instant camera with app-enabled controls built specifically for today's needs.

"We've always supported vintage Polaroid cameras with new instant film," says Oskar Smolokowski, CEO of Impossible Project. "But to ensure a future for the medium, we wanted to make a new camera—one entirely designed with current realities in mind. We wanted to preserve the magic of a fully analog camera, but use the advances and technologies of 2016 to give it more features." 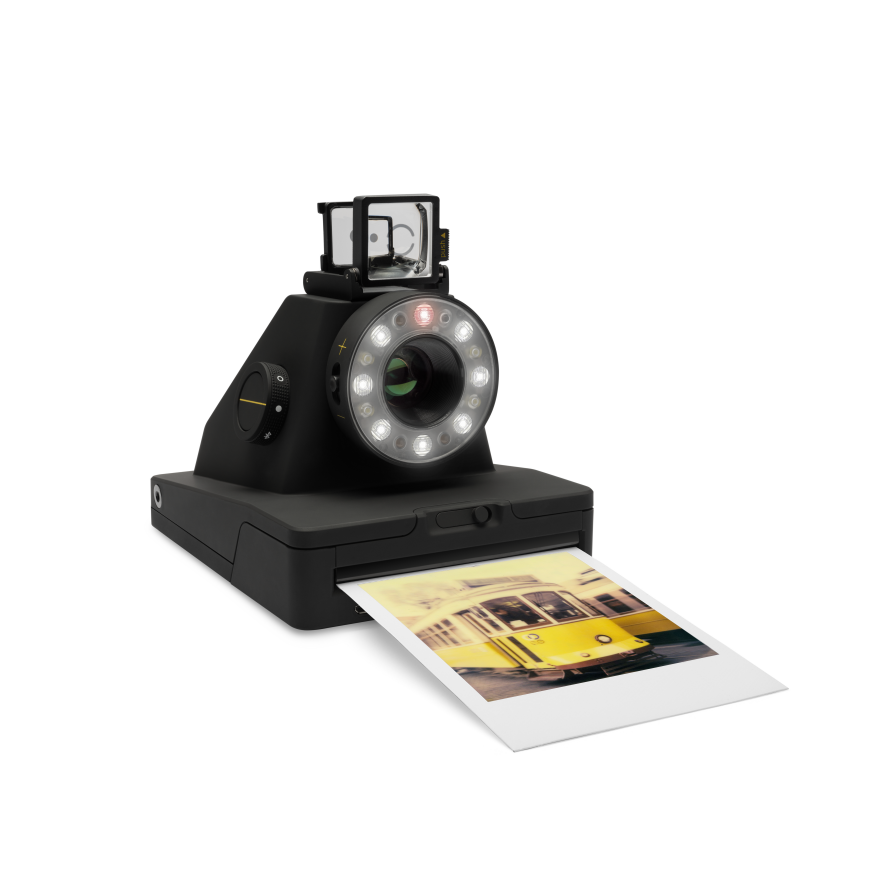 Looking to the current state of photography and the convenience of cellphones that come fully-equipped with 4k, 12-megapixel cameras, Smolokowski knew he wanted to make a camera that could tap into existing technologies and compete with products already on the market. "Photography is a form of expression that's very strongly tied with technology," Smolokowski says. "When smartphones with great cameras came along, they really changed the landscape of photography, making it more accessible than ever. We wanted our camera to be conscious of this new connected world, and we needed to be relevant for today's consumer."

To achieve this, Smolokowski collaborated with Jesper Kouthoofd, CEO and co-founder of Teenage Engineering, to bring the camera to reality. Smolokowski got in touch with Kouthoofd in 2013, after he reached out via customer support about creating film that could store music files within photos. Kouthoofd wrote back personally the next day. "I went to Stockholm the following weekend and we started brainstorming about getting this musical instant photo working, but somehow we got to talking about cameras," Smolokowski says. "And here we are, 3 years later."

The team wanted to reimagine the instant camera, in a way that would be compatible with many of the digital technologies we use today. The I-1's app integration and Bluetooth connectivity allows users to control the settings of their shot (no previews) to produce one, unique instant photo. Although the I-1 doesn't produce a digital file, it combines the analog nature of taking an instant photo with the precision and control of digital settings, allowing users to experiment with light painting, double exposure and more. 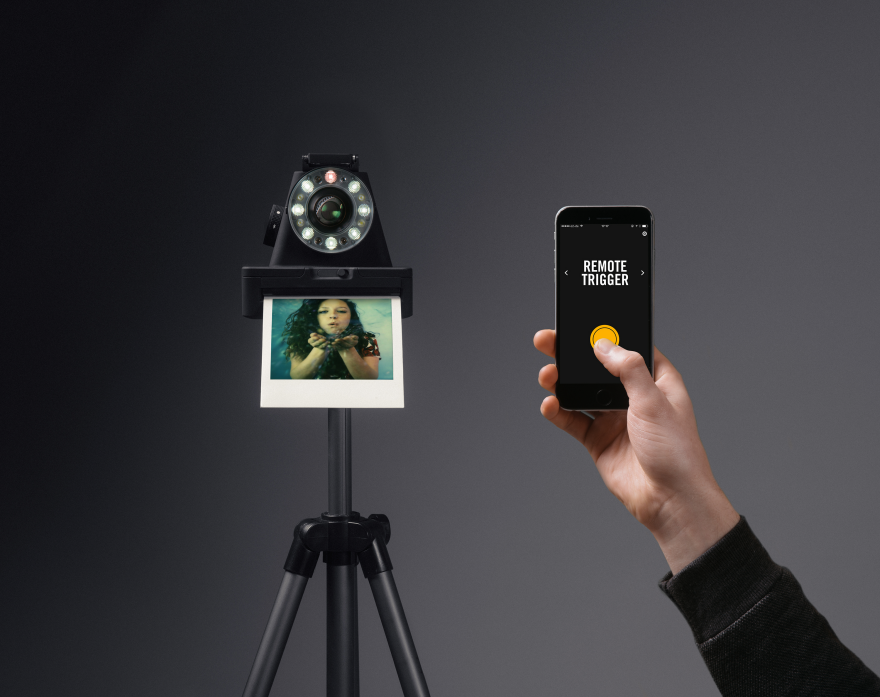 "Manual control in the app is a particular favorite of mine, which is the more advanced photographic feature we have in there," Smolokowski says. "I love setting up a tripod and a scene and just getting that full control of the shot. If I want blur I'll put on a longer exposure, if I want shallow depth of field I'll get the aperture open. Everything is possible and you can be sure it will work."

Working with the team at Teenage Engineering, Smolokowski began with a few sketches, but the majority of the work was done directly in CAD, allowing for quick prototyping and rounds of feedback. "Jesper wanted to completely redesign the classic Polaroid model rather than follow the traditional instant camera cues," Smolokowski says. "All the connections to the vintage Polaroid cameras are purely functional." 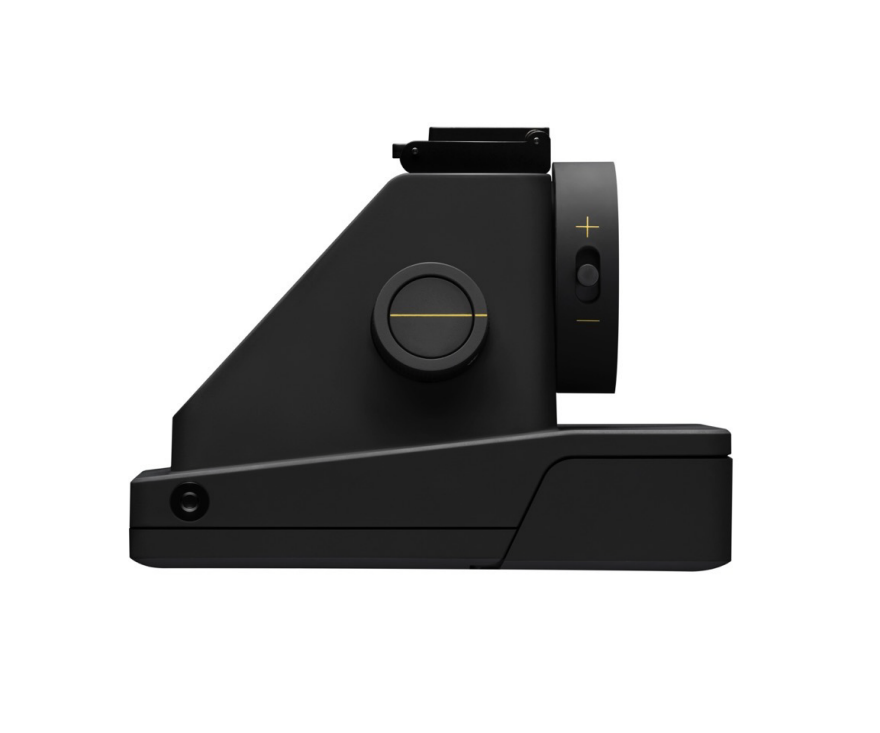 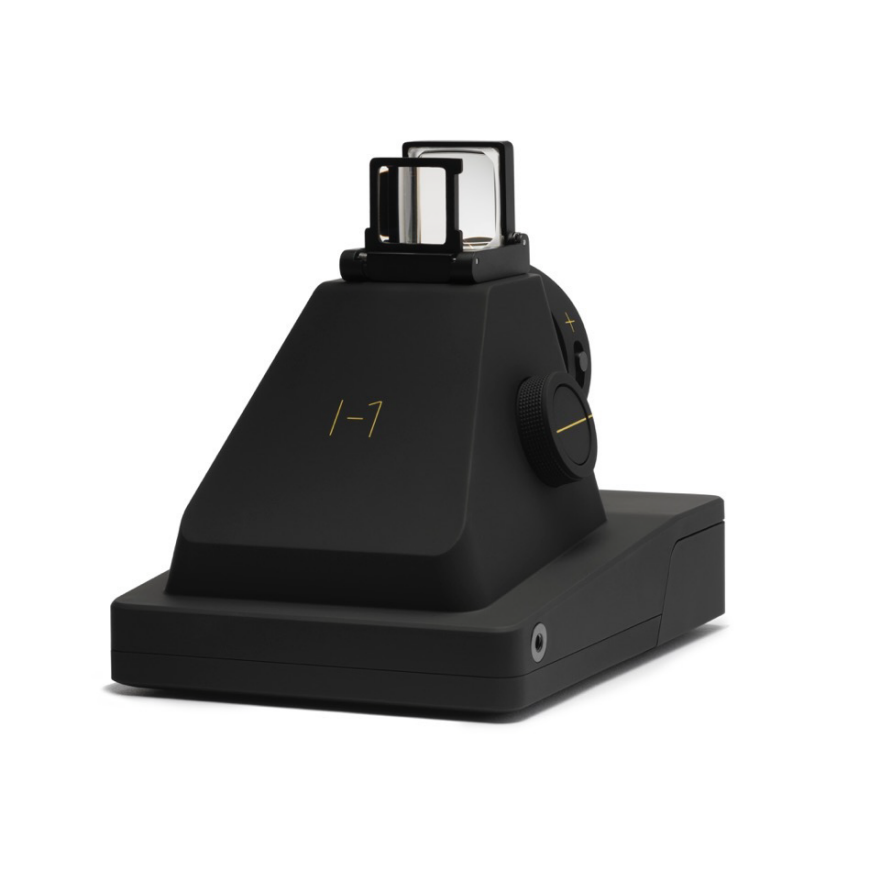 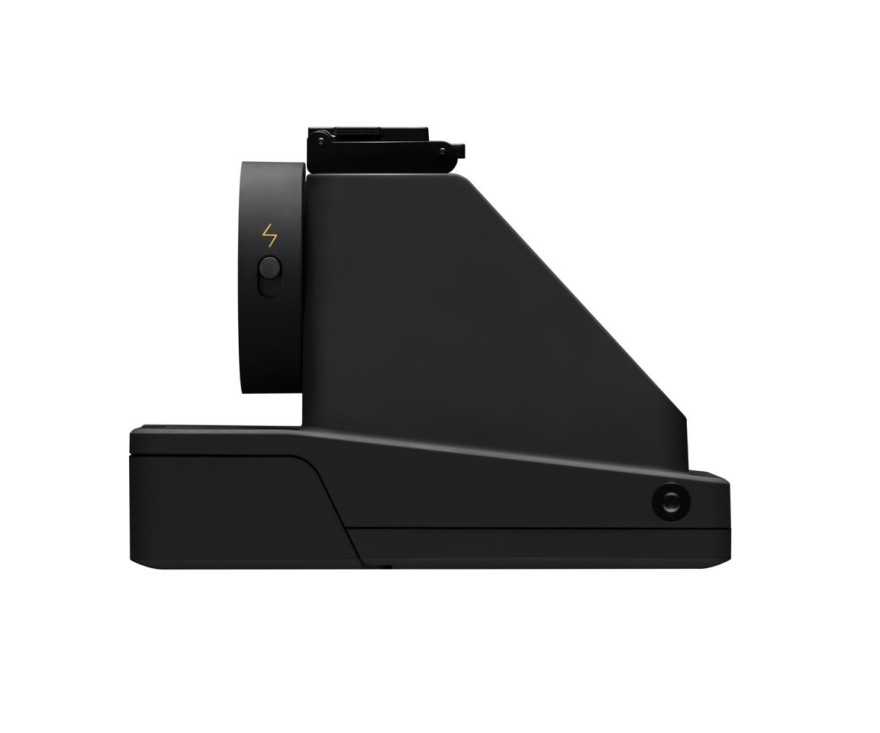 The camera's form is derived from the amount of space needed to take in light coming through the lens, focus it on the film plane and process the photo coming out of the camera. "It's the most minimal shape following the light path," Smolokowski says. For the I-1, the joint design teams had to be able to fit a mirror at a perfect 45 degree angle, a constraint which, along with the film processing unit on the bottom, formally ties the I-1 back to Polaroid cameras of the past. 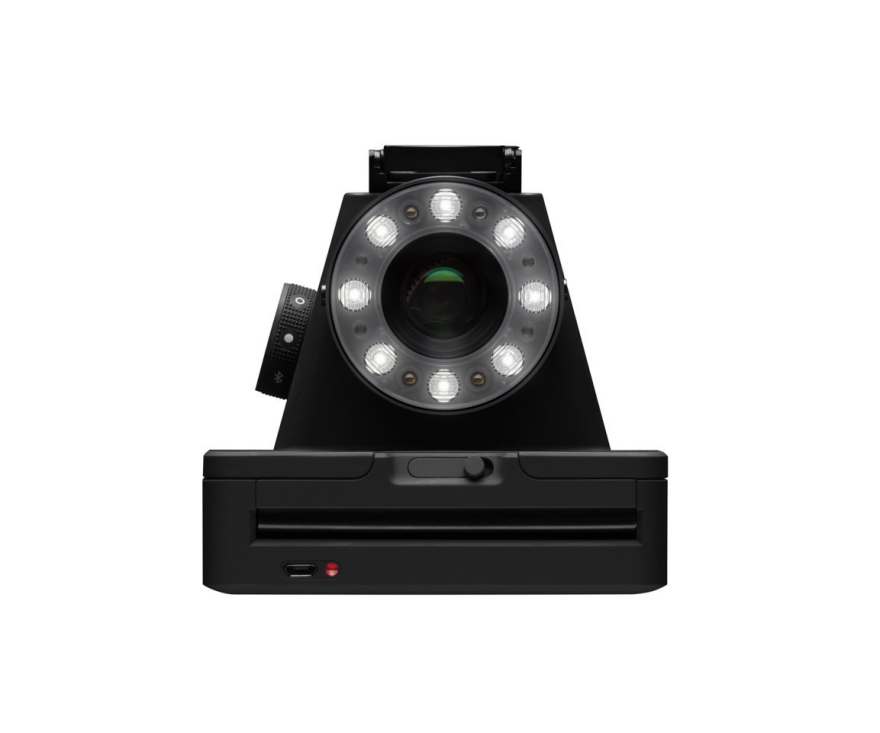 Where the camera deviates a bit from Polaroid cameras of yore is with its circular flash, a distinct design element of the I-1. "The ring flash is known for creating great portrait light, and that was a big focus while designing the camera," Smolokowski says. "Most Polaroid cameras can't get close enough for portraits (limit is 3-4 feet on most models), so we wanted to completely get rid of this limitation in this new camera. You can go as close as 1 foot [from the subject]."

Inside the I-1 are a series of complex, moving parts including precise stepper motors, a DC motor, carbonfeather shutter blades, a mirror, a lens disk with 5 different lenses on it, 7 different PCB's and surgically precise stainless steel rollers—just to name a few. 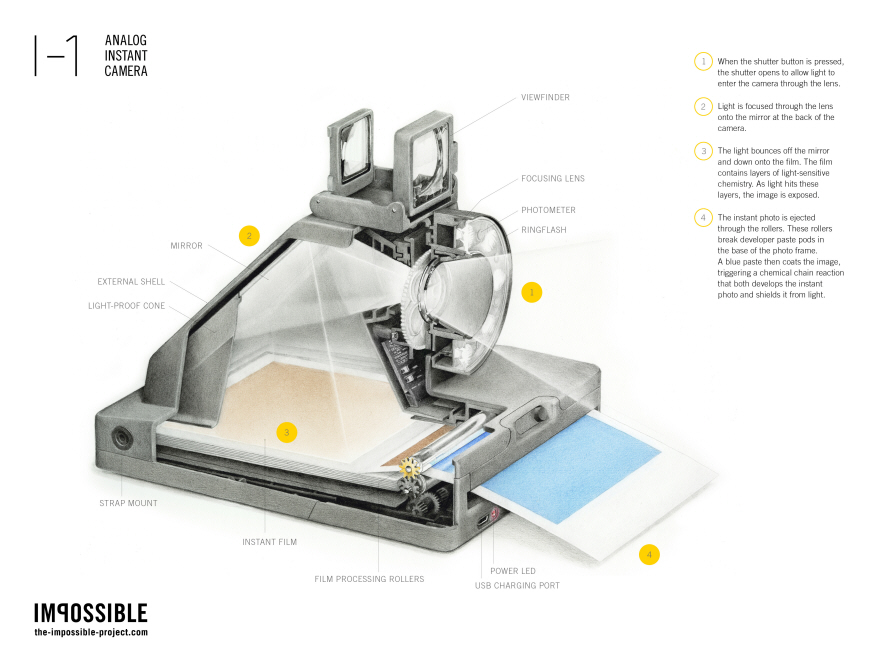 Upon pressing the shutter button, the shutter opens, allowing light to enter the camera via the lens. That light is then focused onto a mirror in the back of the camera that bounces it down into a strip of Impossible I-type or 600 type film containing layers of light-sensitive chemicals. "The light cone starts by attaching the first surface mirror to the plastic molding, at a 45 degree angle," Smolokowski says. "Precision is important." The initial shutter subassembly is then mounted, and a light baffle is placed on top to seal the assembly from unwanted light.

Next is the film processing unit itself, a complicated gear train of 7 gears, assembled to transmit the power of the DC motor to the rollers at the right speed—one of the biggest challenges of the project. "The spreading system—getting the camera to evenly spread the paste that is located at the bottom of each photo is particularly hard—the whole thing has to be surgically precise," Smolokowski says. As light hits, the image is exposed and ejected through rollers, which break up developer paste pods in the base of the photo frame. One of the gears pulls what is called the 'picker' along with it, pulling the photo into the rollers and kicking off the spreading process that starts a chemical chain reaction to develop the instant photo and shields it from light.

Twenty years after the original instant format, the I-1 is making its debut, available online from Impossible Project or through the MoMA Design store for $299.00.