A Brief History of Panhard, the Weird and Wildly Popular French Automaker

The look of tomorrow, yesterday from one of the world's oldest car companies

American cars have at times been the fastest and flashiest, but rarely have they been the strangest. In my opinion, the French are truly the masters of bizarre cars. Sure, every major car maker has made an oddity or two, but it seems the French made it a point of pride to design cars that flew in the face of whatever everyone else was doing. Citroen was likely the most successful in this pursuit, with their very odd, but wildly popular 2CV and DS models. Panhard, however, was not as successful with their offbeat ideas. 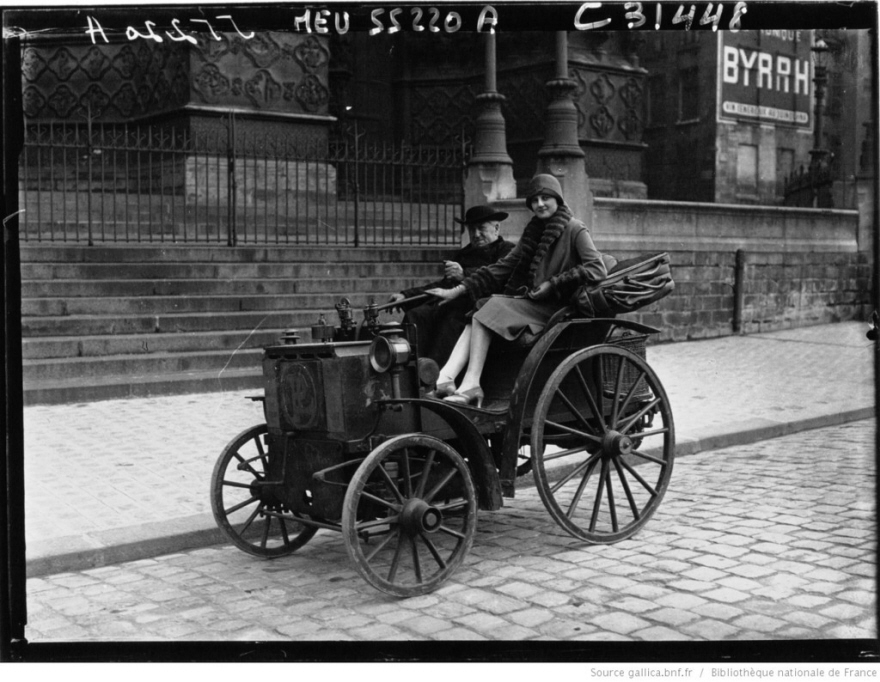 Panhard began selling one-off custom cars in 1890, making them among the world's oldest car companies. In its first few decades, Panhard was a hugely influential car maker, in many ways laying out the platform for what "modern" cars would become. By WWI, they were one of the largest automakers, as well as successful race competitors around Europe.

As automobile design started to shake out in the 1920s and manufacturers began to figure out more solidly what did and did not work, Panhard refused to do anything totally mainstream, offering idiosyncratic Knight style sleeve valve engines in their cars. Though mechanically innovative, Panhard's styling was fairly run of the mill. They took a radical turn towards the unusual in 1936 with the introduction of the Panhard et Levassor Dynamic. 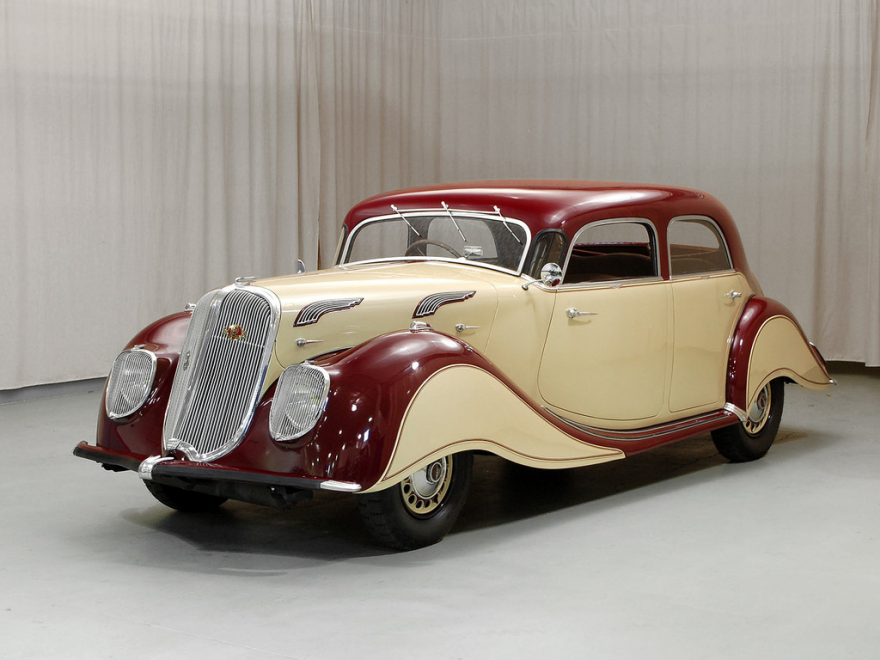 The Dynamic was unusual looking, with a three-piece front windshield and three windshield wipers. It featured innovative yet awkward streamlined styling with headlights integrated into fenders and large bubbly curves all around. The car was rather ponderous looking, being wide enough to comfortably seat people three abreast in each seat. The steering wheel was positioned in the center of the dash, the driver between the passengers in the front. It was claimed this offered better visibility, but it was also significant in that the car could easily be driven in countries with either right or left hand drive.

In actual use, it was awkward and the driver was moved to a standard off center position just a few years later. Perhaps the most innovative features of the Dynamic were its independent front suspension and unibody design (the frame was built into the body, rather than a body sitting on top of a frame), a first for French luxury cars, and the industry standard today. 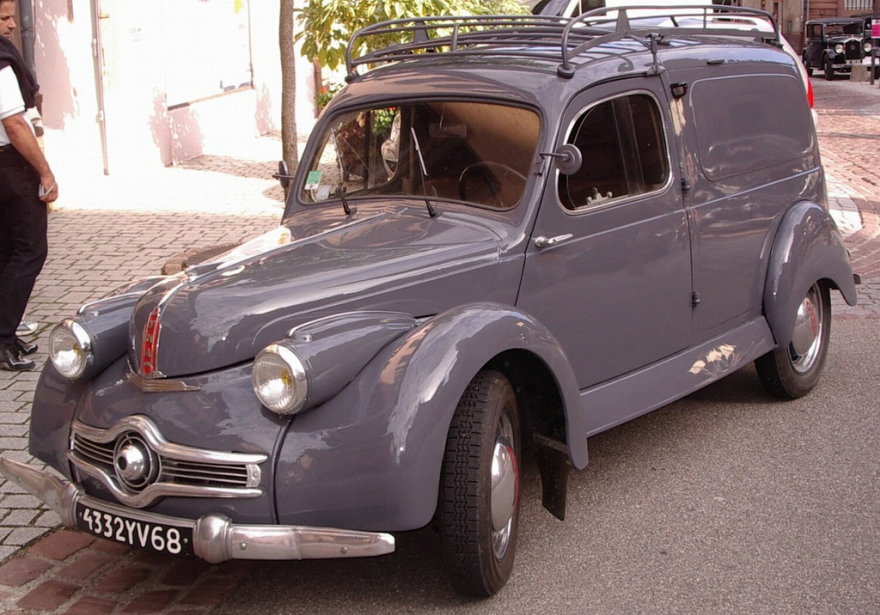 Production of cars ceased for the large part during WWII. After the war, Panhard was back at it and making even weirder looking cars with unconventional drivetrains. Steel was strictly rationed in France at the time. Panhard decided they would try out aluminum, the manufacturing of which had increased for the war effort. Although more expensive than steel, according to Jean Panhard's calculations, they would still be able to make an aluminum bodied car for a reasonable price. Unfortunately his calculations were wrong.

Panhard had not accounted for the waste that would be created when cutting out the body panels for the cars from aluminum sheets, instead only calculating for actual aluminum used. This resulted in each body costing more than three times what it would have cost if made out of steel. After a few years, Panhard was close to bankruptcy and forced to revert back to steel for much of the body. Unfortunately, they didn't have the capital to retool and create new body stamping dyes and had to use thicker sheets of steel to match the thickness of aluminum initially used, resulting in added weight. That said, Panhard was still making interesting and innovative cars. They just weren't as light. 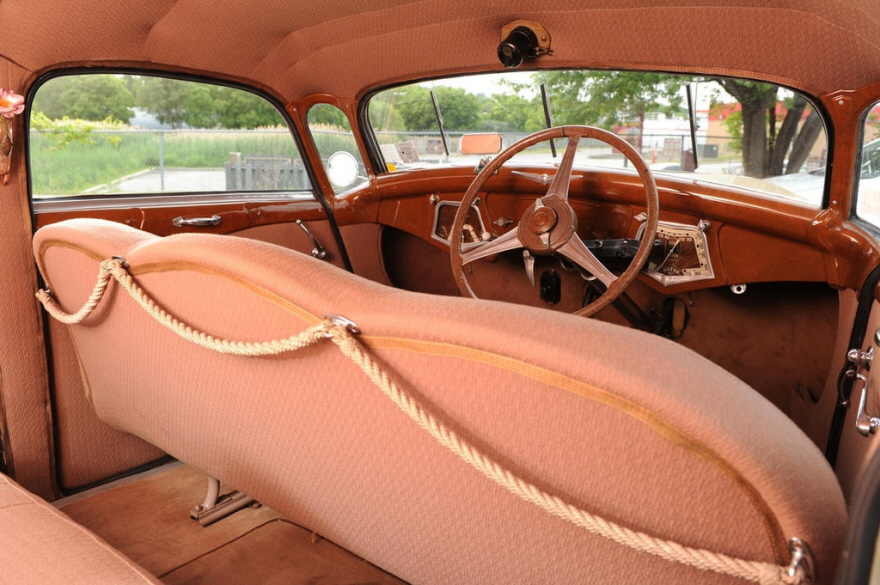 The 50's and 60's Panhards also had an unusual engine to go along with their space pod styling and aluminum body work. They employed an air cooled four stroke flat two cylinder engine. Although unusual, it was actually a surprisingly powerful little power plant. When compared to their German competitor, the Volkswagen Beetle, the Panhard Dyna looked positively sophisticated. It had four doors, was roomier, more powerful, quieter, more fuel efficient, and was just a tad more expensive. Unfortunately, they didn't have the legendary marketing campaign that the Volkswagen did (the "Think Small" campaign as it is known, is a veritable Citizen Cane of advertising).

Sales dwindled in the home market and the brass at Panhard couldn't figure out how to interest other countries in their well made, weird little cars. By the mid-60's the firm was gasping for life. Their styling was odd and dated and their two cylinder engine was on the verge of obsolescence. Panhard, desperate for cash, was selling off more and more of itself to Citroen. By 1965, Citroen had full control over Panhard. Citroen gave the company one last shot to develop a successful car, the ultimate result being the Panhard 24. The new model was largely the same old underpinnings with a sleek new body. It was a pretty good car, but it was too little too late. 1967 would ultimately be the last year Panhard would make automobiles.