Rainy days are a bummer enough without having to slosh around in a frumpy raincoat and boots. That's why The Arrivals' latest take on the waterproof poncho feels like a ray of sunshine, providing super stylish yet functional garb to combat anything Mother Nature might send your way.

The sleek poncho is a limited edition collaboration with Brooklyn-based Snarkitecture, an experimental art/architecture studio founded by Daniel Arsham and Alex Mustonen. The ELEMENT Poncho marks the first partnership for The Arrivals, but since the outerwear brand was also co-founded by two architects, Jeff Johnson and Kal Vepuri, it was a particularly synergetic collaboration. 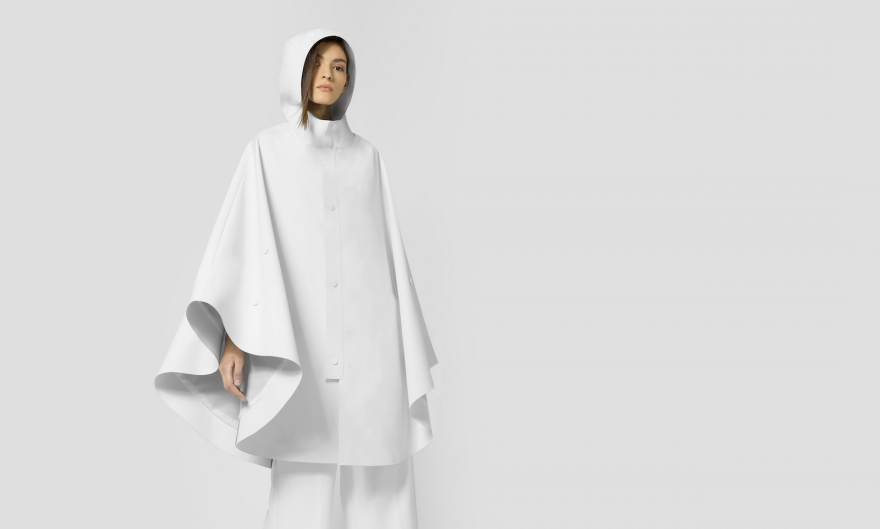 "Being huge fans of Snarkitecture's work and their minimalist design approach as a whole, we had them on our radar from early on," says Johnson, co-founder and Creative Director of The Arrivals. "We started our initial conversation spring of 2015 and immediately began a dialogue around applying a reductive design approach to the discipline of outerwear design—how can we reduce a jacket to its simplest form and core functionality, while instilling an element of curiosity and wonder."

Snarkitecture kicked the project off with an initial concept presentation, but Johnson and Mustonen kept an open dialogue throughout each phase of the project—from fleshing out the initial design concept to the final construction. "In any collaborative experience, you're faced with constant decisions that can layer complexity to the concept," Johnson says. "We wanted to do the opposite. Keep the finished product as close to the concept as possible. Don't clutter the concept with excess, rather continue to refine, rework and let the integrity of the design and material concept speak for themselves." 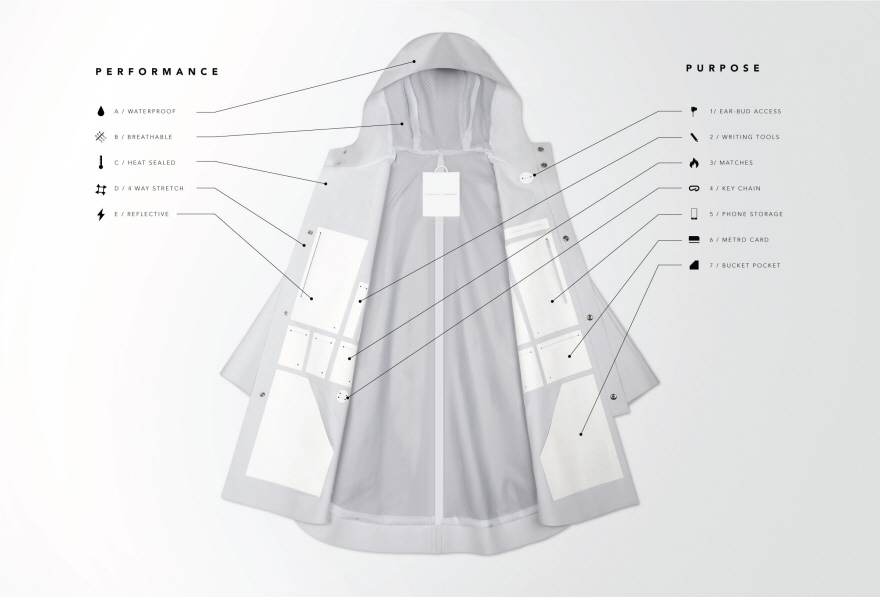 That initial concept was of form for function: "Creating a poncho that not only protects you from the elements of your environment, but allows a level of preparedness, through its interior pocketing grid," Johnson says. "These simple ideas drove our collaboration."

The teams looked at silhouettes that represented a reductive design approach to outerwear, with Mustenen and Gil Sunshine (a junior designer at Snarkitecture) taking the lead on developing the central theme around the idea of contrast—pairing notions of form versus function, minimal versus ornate. From there, both teams began prototyping silhouette studies at The Arrivals' studio in search of a shape that "merged familiarity with the foreign," Johnson says.

"Our goal was to create an anti-silhouette, void of ornament or articulation, allowing the user to approach the design without pretense," Johnson says. The final result took inspiration from Scandinavian home design (in true architect-cum-outwear-designer fashion), distilling the most elemental idea of outerwear as protective shelter with an A-line shape. "The A-line silhouette is ideal for hooded protection from the elements and water dispersion," Johnson says. 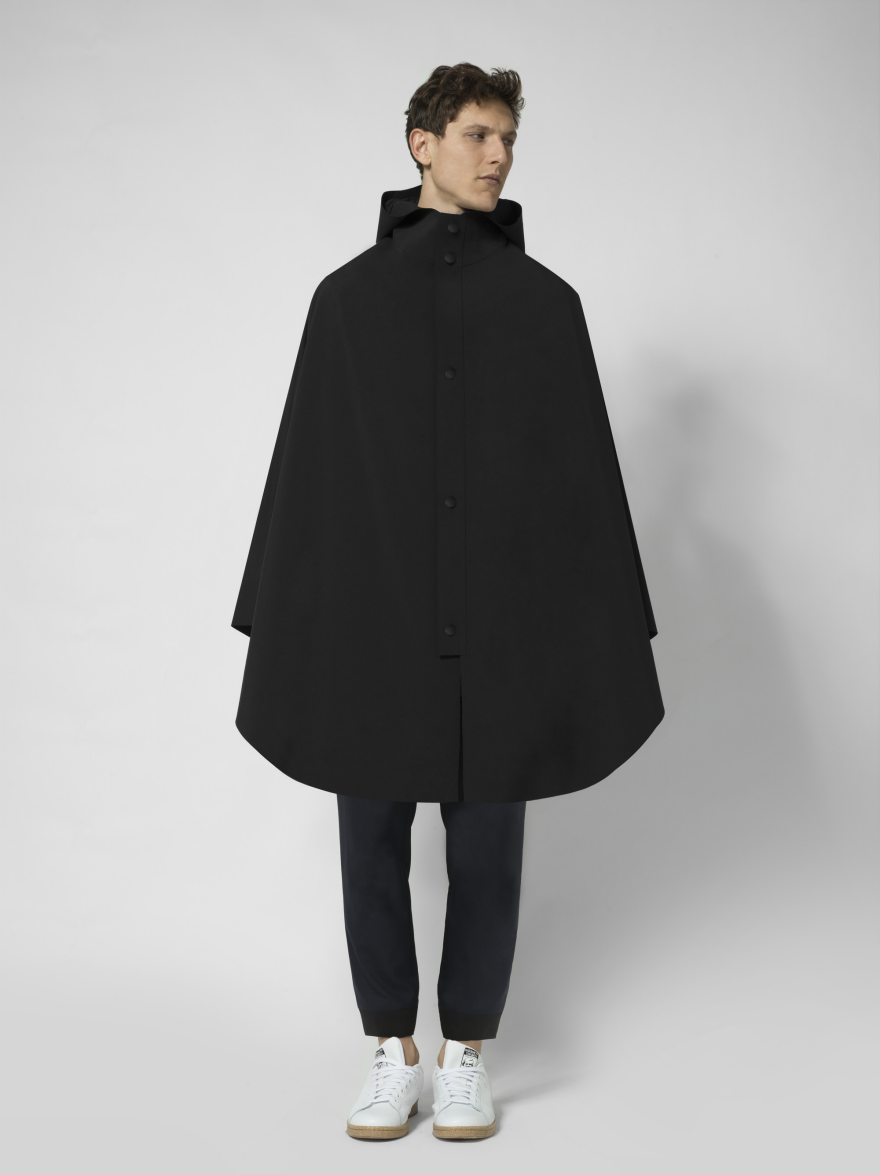 The A-line silhouette became the core form of the ELEMENT Poncho, a heat-welded, laser cut poncho with a minimalist exterior. "We felt this poncho required even more refining and less exterior detail than some of our previous styles," Johnson says. "This poncho represents a union of ideals, reducing the design to the essential and innovating beyond the norm. We focused the design on a minimalist shell, but really amplified the level of detail and designed the interior to optimize utility."

In contrast to its minimal exterior, the interior of the ELEMENT Poncho is highly articulated—outfitted with laser cut hidden pockets, ear-bud eyelets, waterproof safety compartments and over-sized bucket pockets. "Early on in the design process, we came across a retro illustration of a man with an open overcoat, displaying a stereotypically sketchy collection of Rolex watches lining the coat interior," Johnson says. "It was exciting to pull this familiar element into the design process; the goal being to create a reinterpreted sense of nostalgia and irreverence. This concept formed the basis of the ELEMENT Poncho: a minimalistic exterior contrasting with a highly considered interior." 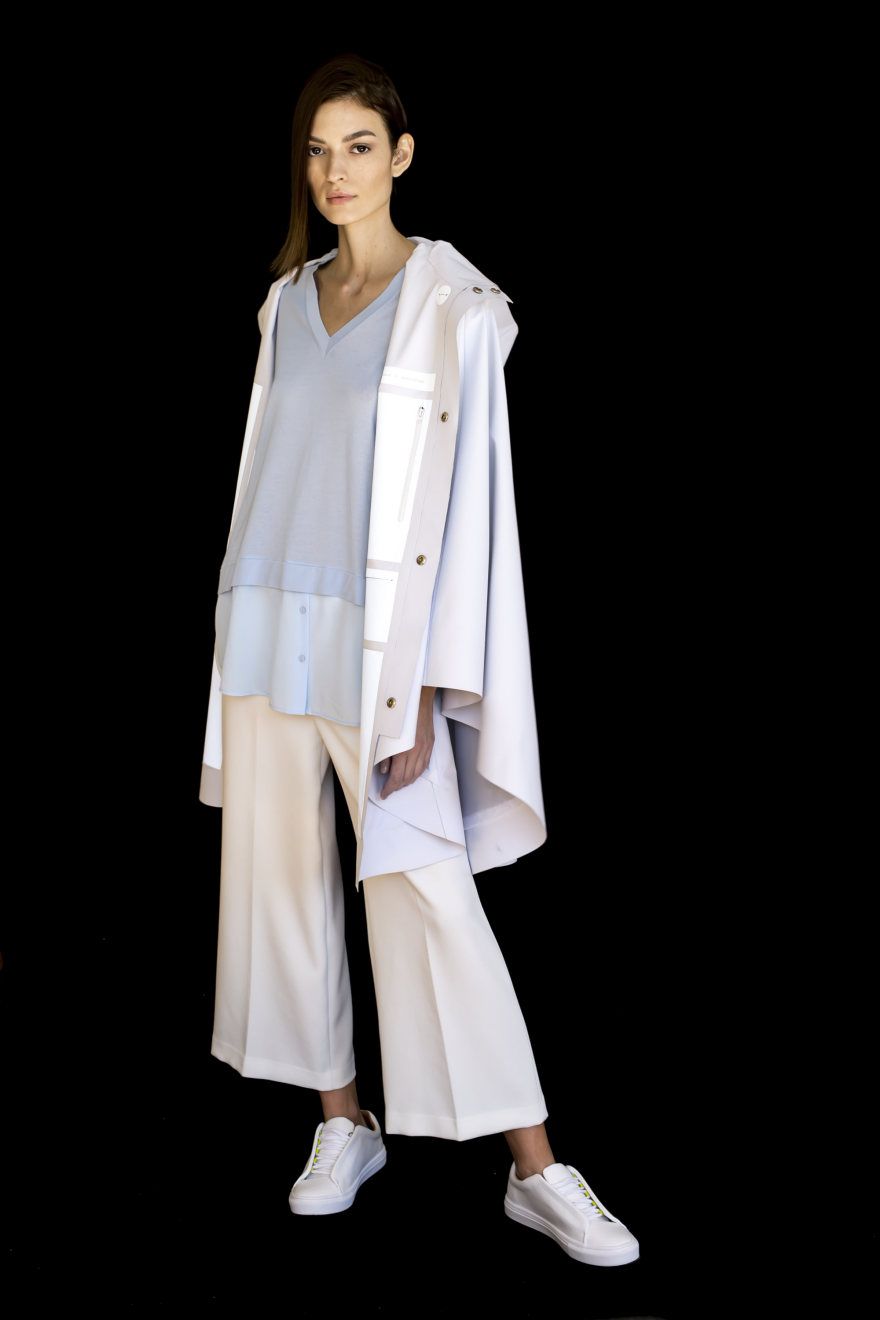 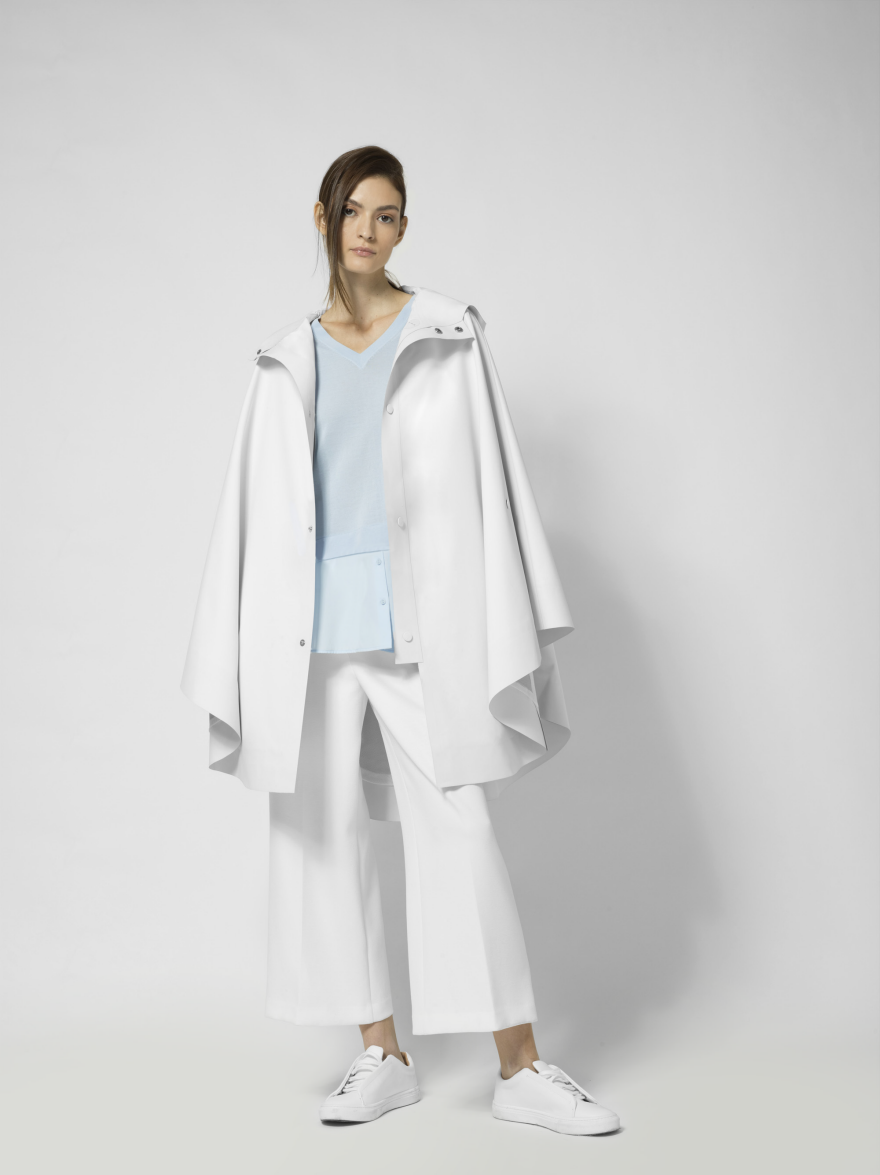 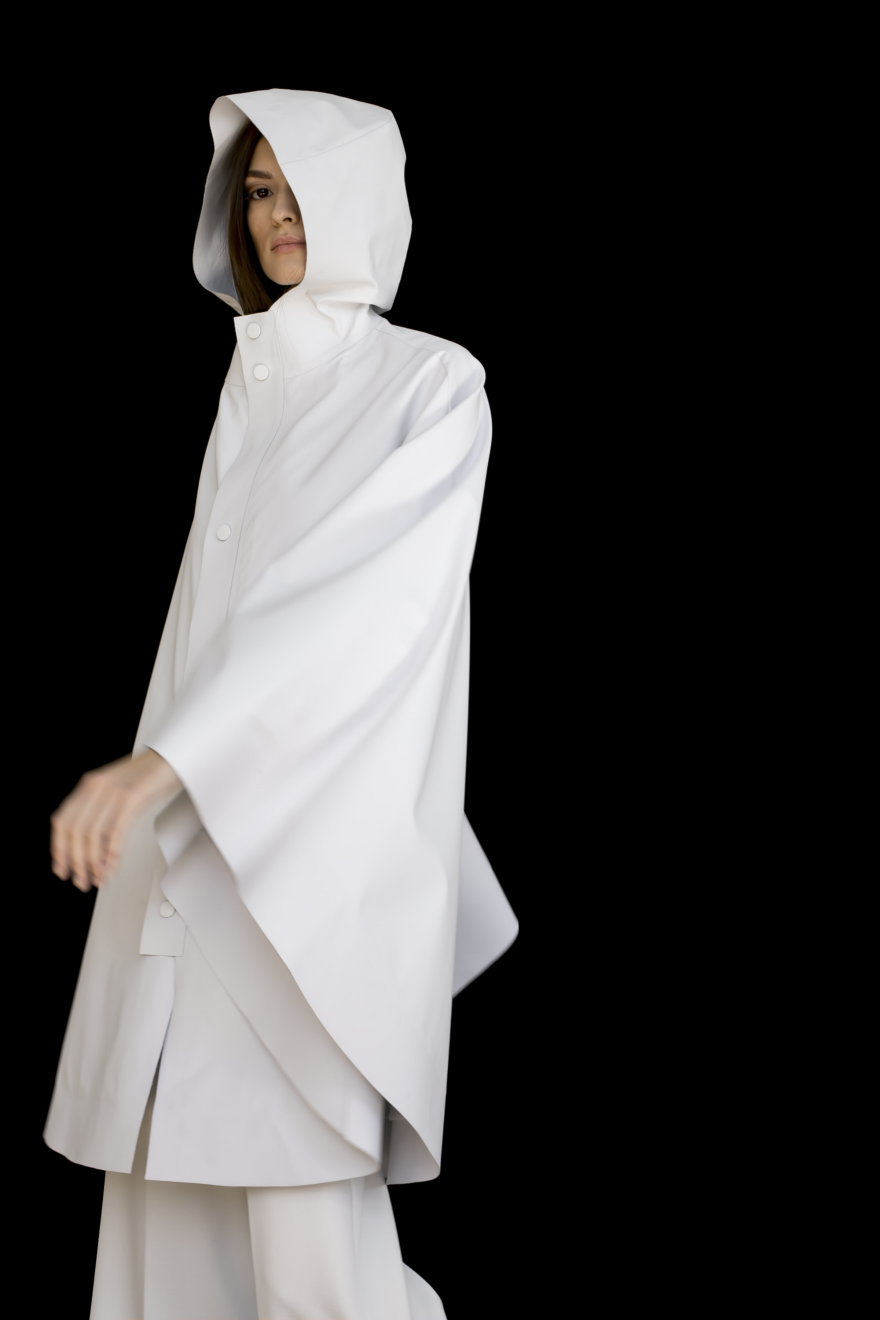 With both the exterior and interior resolved, The Arrivals worked on developing a unisex pattern that could be easily worn while maintaining extreme functionality. "We began with a simple A-line, hooded poncho drape in our studio, then worked for months with the most talented pattern-makers in NYC to develop a silhouette that merged wearability with outerwear functionality," Johnson says.

Colors were a no-brainer here, given Snarkitecture's preferred palette of black and white. The team opted for Lunar White and Space Black exteriors, and used a stain-resistant, waterproof poly-blend woven shell, and a waterproof poly-spandex micro-mesh shell, respectively, chosen for their optic color and technical properties. Polyester mesh was used for lining and pocketing, while reflective polyurethane heat-seal film was used for the pocket facings. 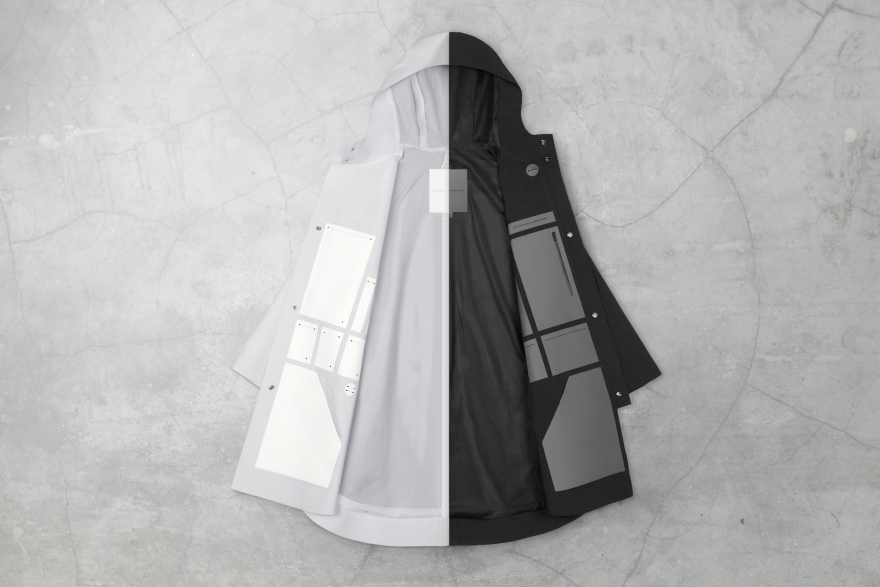 The designers worked closely with the pattern-makers to determine the best finishing method for performance and minimal aesthetic, resulting in heat-sealed edges for a clean yet raw edge. (Brush up on the heat-sealing process here.) "This is a relatively new technique, especially when manufacturing in the United States," Johnson says. "In order to create a water-tight heat-seal, we partnered with a local New York-based factory that is quickly becoming the leader in heat-sealing, binding and seam taping. We worked closely with them to produce a design which leveraged the best of their heat-seal machinery and construction to create a design complete with taped, waterproof pockets and clean-cut, heat-sealed edges."

Assembly of the garment's complex interior proved to be one of the most time-consuming aspects of the design, with much attention paid to how the pieces fit together. The Arrivals work with a Japanese vendor who laser-cuts each of the reflective polyurethane 3M panels for the pockets, which are then applied to heat-seal transfer sheets before being shipped to The Arrivals' factory back in the United States.

"Manufacturing in NYC has its undeniable benefits of hands-on development and construction with high quality product, however, much of the contemporary construction techniques such as laser cut details, heat welding and seam sealing are often outsourced overseas," Johnson says. "After much research, we connected with a progressive factory that had recently been awarded a CFDA grant in order to purchase the cutting-edge machinery that we needed to construct the ELEMENT Poncho. This became a particularly amazing partnership as we brought forth a new design challenge at the exact moment they were beginning to test their new equipment. They were highly motivated and collaborative in working with us to push the limits of their new tools."

The Arrivals' factory heat-seals those transfer sheets to the interior facings on the poncho, following a diagrammatic pocket key provided by the design team. Assembled facings are then sent to a local laser-cutting vendor, who cuts the final pocket openings into the reflective facings.

After returning to the factory, cut mesh and shell self pocket bags are taped to the back of the facings depending on the utility of the particular pocket, creating a secure water-tight hold. With the interior facings laser-cut, heat-sealed and complete, the garment shell, lining and hood are assembled. Heat-sealed labels are pressed on, and co-branded tonal poncho snaps are applied. The garment is pressed and then shipped out to customers.

"For me, the idea of co-creating a product with a collective like Snarkitecture allowed a connection to bridge the often autonomous fields of art and design, creating a piece that is both emotionally impactful but also meticulously considered in both craft and functionality," Johnson says.

The ELEMENT Poncho is available via The Arrivals' website for $345.