Discursive design is a broad category that encompasses many 'species.' While speculative design and design fiction have gained recent popularity, we should not forget that there are other design approaches that primarily aim to contribute intellectually through designed objects—voice is the focus rather than utility for the marketplace.

With discursive design's roots in Italian radical design of the 1960s, we should remember that Memphis had an internal focus—they were using design to speak to other designers and to challenge their status quo. To an extent, it is with this same internal focus and using a Memphis-esque medium of higher-end, low-production furniture and furnishings that Cranbrook students recently "spoke" to the design community during New York's Design Week.

A recent collection of work from Cranbrook, 'Fine Design for the End of the World', was exhibited at Collective Design fair in West Soho. The purpose of the work was to critically analyze the social, economic and environmental uncertainties of the future through the lens of fine design. 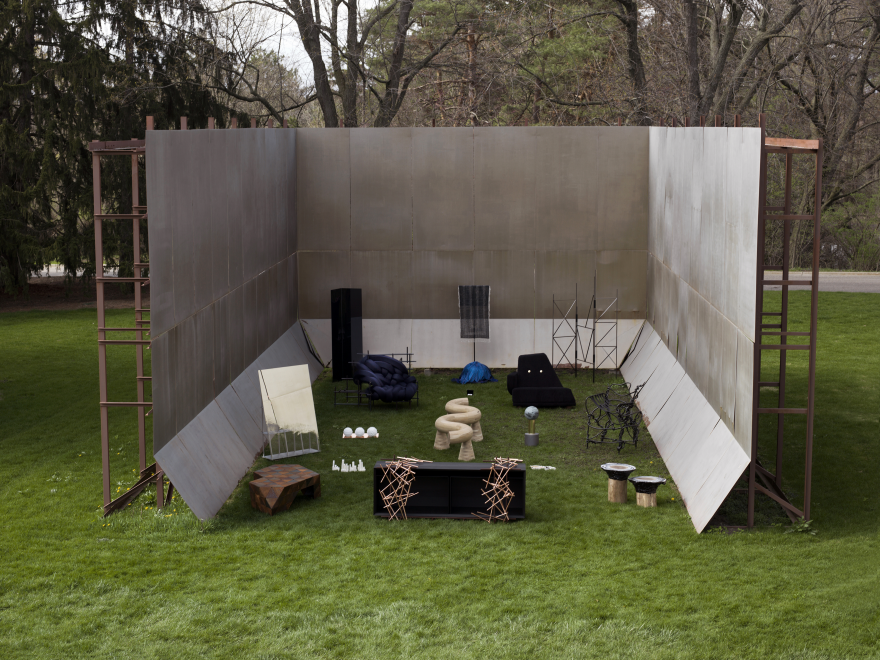 The conversation which led to the exhibition evolved over the course of two semesters in Cranbrook's 3D Design graduate program, and was led by Scott Klinker, designer-in-residence and head of the 3D program. Students were encouraged to critically discuss the state of design in relation to our current global context, and built the exhibit around some meta-questions about the current state of design:
_ Will design somehow save the planet?
_ What does design mean in the era of climate change?
_ Will climate change deliver the 'end of the world'?
_ With the pressing need to rethink our culture of production and consumption, can industrialized society willingly change?
_ Can design still improve the world?
_ Do we just look away and keep making shiny, happy objects while the house is burning down?
_ How do we feel about growing up in an age of environmental uncertainty?
_ Will it (environmental uncertainty) lead to tragedy?
_ Should we raise children in this kind of world? 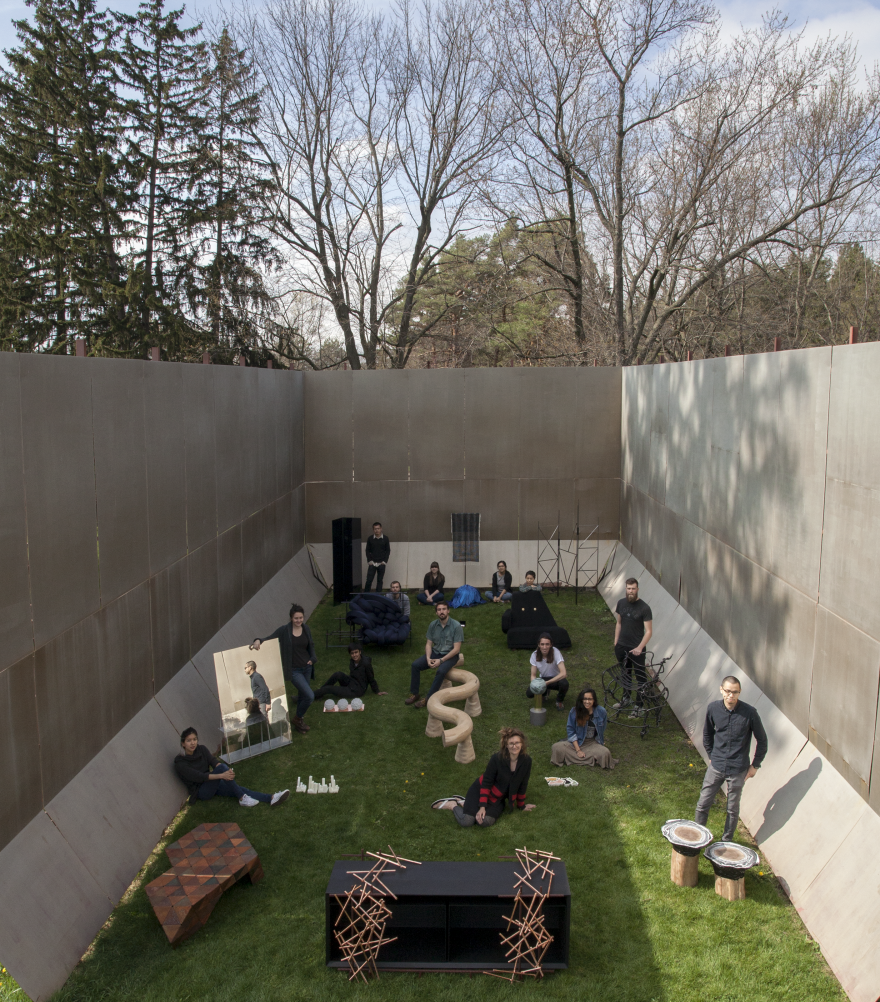 Cranbrook 3D designers from the exhibition with their work
Photo Credits: Charlie Schuck

Though it should be noted, "Of course we are not 'for' the end of the world… Instead we hope to point to the potential tragedy we face. It's not about saying we've got the solution; instead the show portrays what it feels like to face these conditions as creative young people who want to improve the world. The work can be read as a poem, a prediction, a protest or a prayer for our collective future." 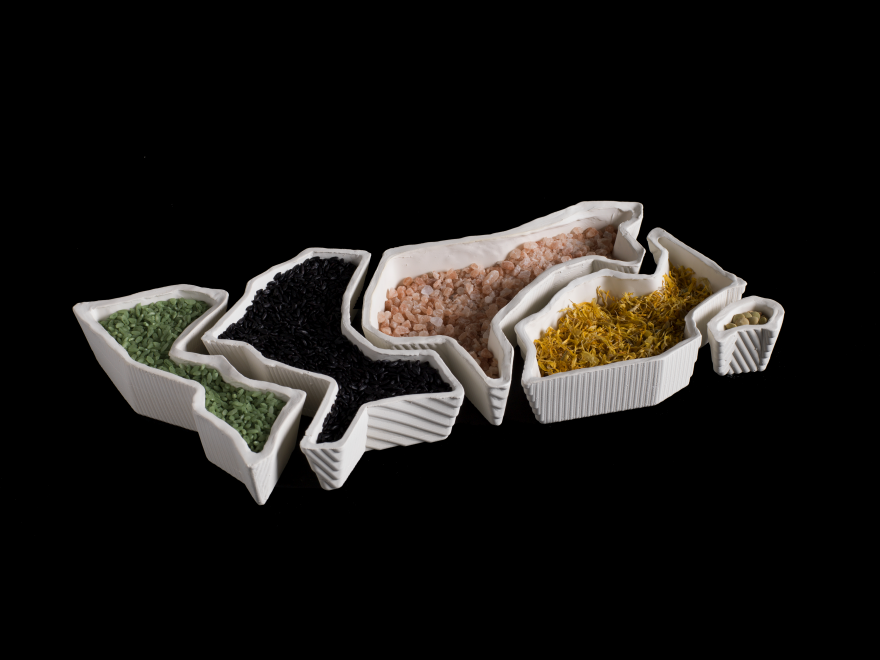 Mapped Vessels by Raveena Bhalara : These vessels are abstractions of the globe's continents and hold various grains that feed the world. This is a reminder that we are slowly and unapologetically depleting the earth of its resources. As the climate changes and agriculture begins to fail, how much will be left?
Photo Credits: Charlie Schuck

On the intention of the work and exhibit:

"Prototypes can circulate as ideas on the internet while never being intended for production. This exhibit, for example, is intended to provoke conversation, not sell stuff." 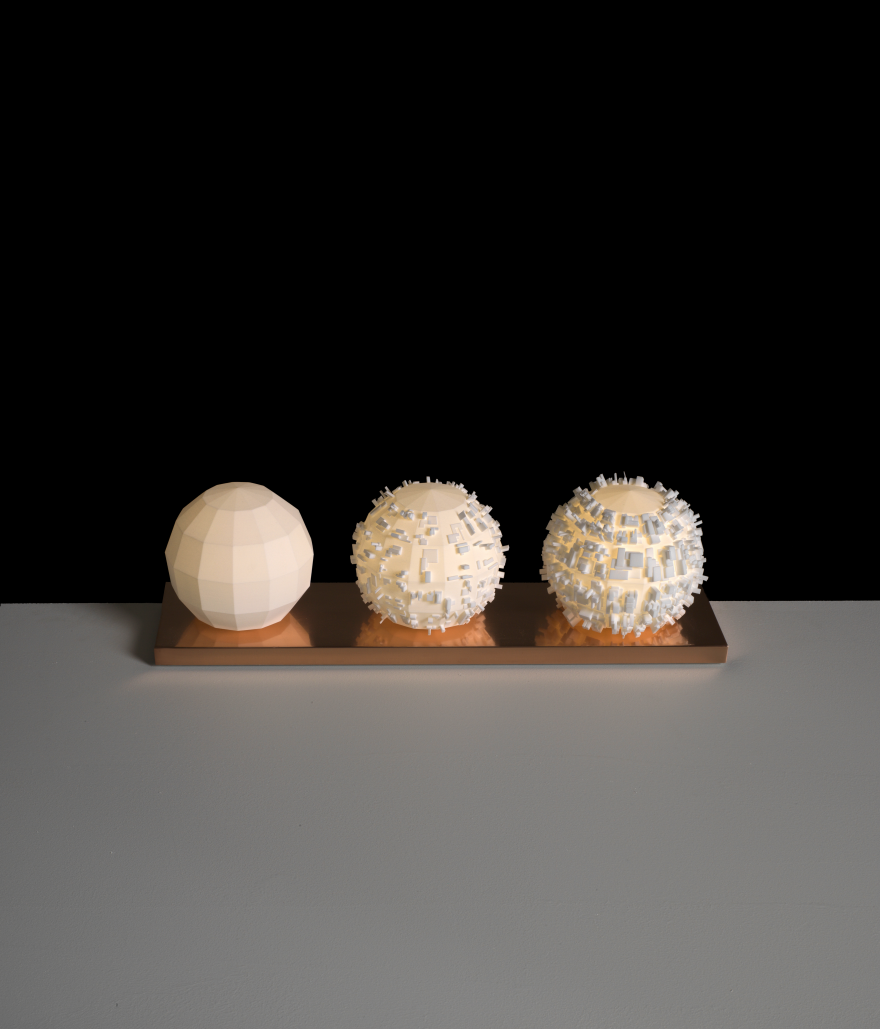 Global Population: Year 0 / 1986 / 2050 by Vineta Chugh : Will human population growth lead to environmental collapse? The forms of this lamp are generated by actual data depicting past and projected figures for human population. Numeric data were translated into architectural forms that show relative relationships over time. The light of the globe becomes dimmed with the weight of all these passengers.
Photo Credits: Charlie Schuck

The below are excerpts from Scott Klinker's interview about the exhibition:

About the discipline of ID:

"Historically, Industrial Design has served industry, and therefore has reasons to be complicit with certain lies we tell ourselves about 'progress.' Fine Design doesn't have these constraints. Fine Design can look more objectively and critically at design culture to ask important questions. In fact, it may be Fine Design's duty to ask those questions that Industrial Design can't or won't." 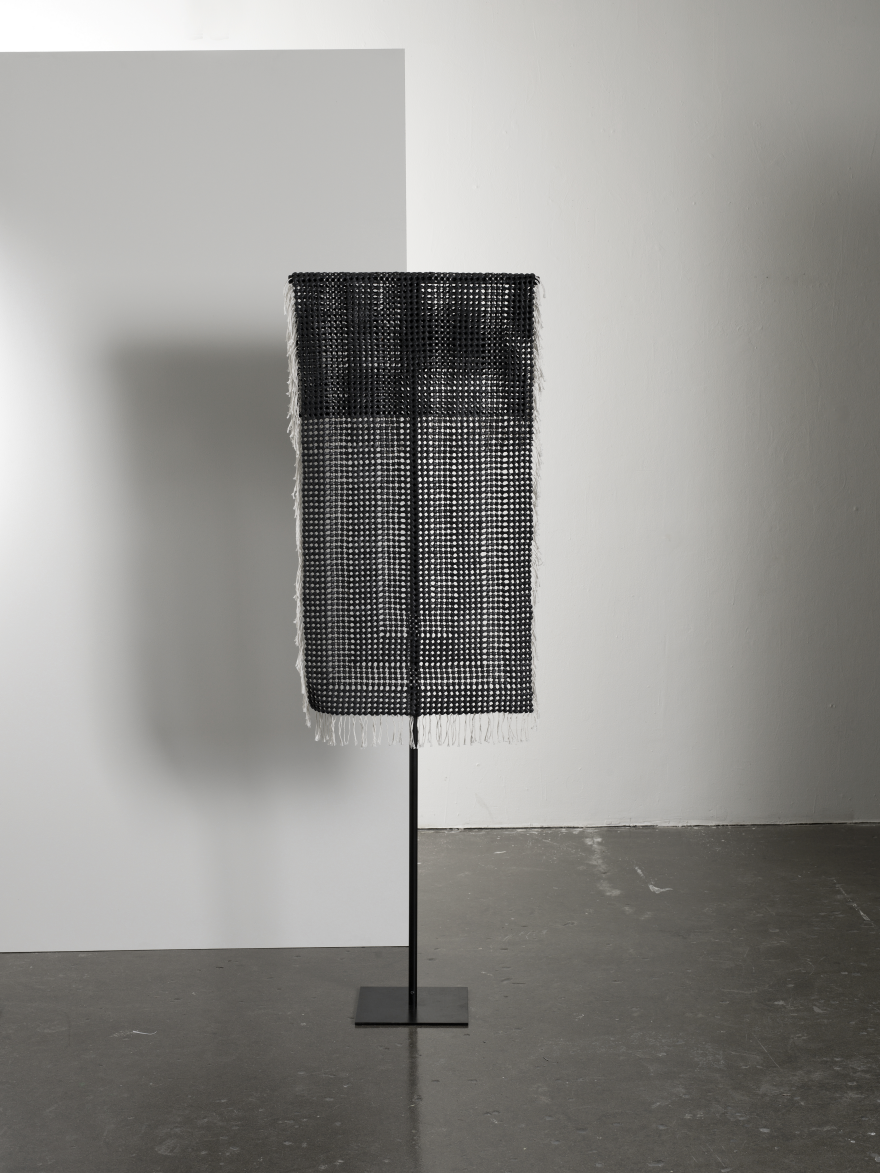 Knot Rug by Sophie Yan : This piece subverts the traditional notion of Fine Design by transforming a waste material (rubber bicycle inner tubes) into a precious object through a meticulous craft process and countless hours of human labor. In a world where the human population is growing at an alarming rate while machines are steadily replacing human labor, what is the value of the human hand? What is the value of 'waste' material?
Photo Credits: Charlie Schuck

About the formal quality of the work:

"The formal responses to this subject were varied. Some designers responded with 'mythic' images of mankind, while others responded with forms derived from data. Formal themes of 'excess' and 'disintegration' were prevalent and the overall collection has a somber mood." 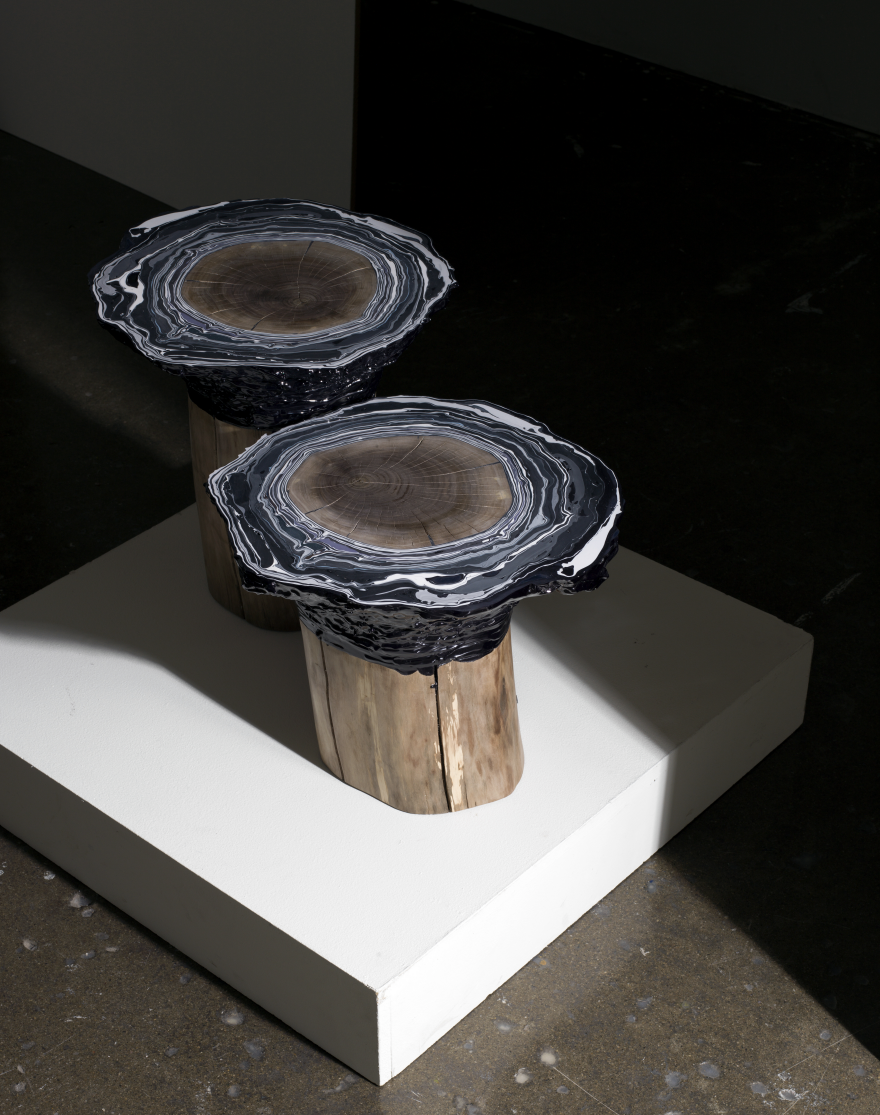 Growth by Robin Chen : What is natural? What is artificial? Will these connections be healing or toxic? These side tables serve as a reminder of these questions.
Photo Credits: Charlie Schuck

"All designers hope to improve the world in some way, whether it's through new functions, forms, processes, aesthetics, etc. Design is a positive force! We hope to make the world more 'human.' ... Designers, like other kinds of citizens, can ask such questions, but it takes collective will and leadership to give healthy answers. Designers have offered many visions of a more sustainable society, but very few ideas have overcome the political status quo so far. " 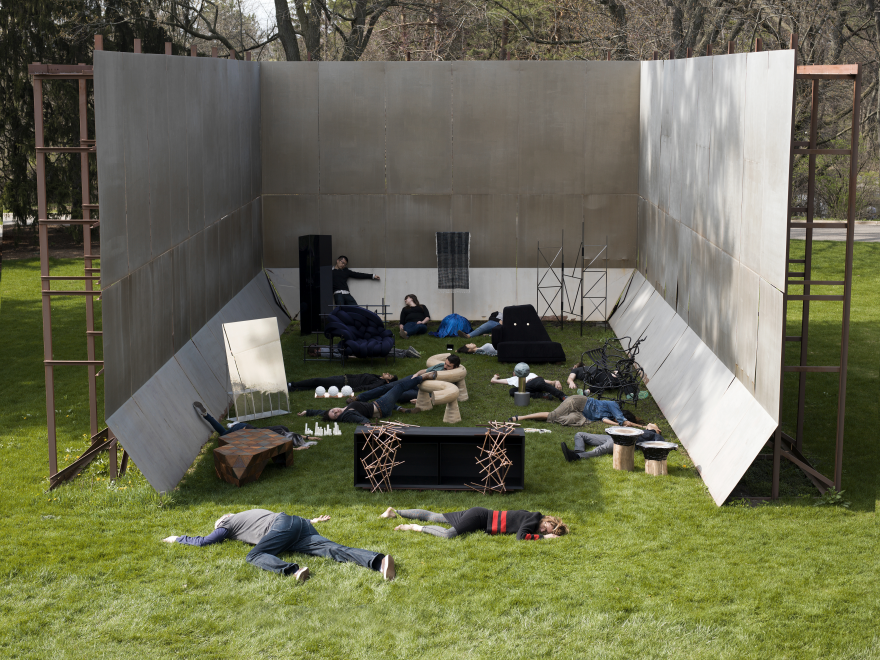 Designers at the End of the World
Photo Credits: Charlie Schuck

See the entire interview about the exhibit and all of the work here: http://cranbrookfinedesign.com/