Tools & Craft #3: How to Saw Straight, Part 2: The Alexander Technique

This is sort of a followup to my blog entry on sawing straight. After I posted it I got to thinking that my approach is not really about anything other than paying attention to what you are doing, learning to "see" square, and then learning to feel when everything is going right. I'm training my body more than any specific technique or tweak. I thought about this and I think I know why I have drifted to this approach. 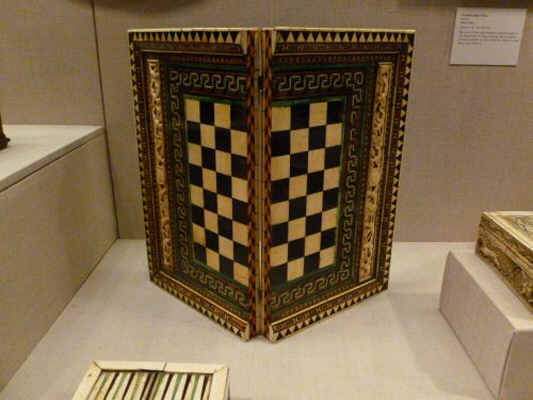 Note: The picture has little to do with anything except that it is a superb example of craftsmanship from 15th century Venice (It's in the Metropolitan Museum).

Many many years ago I was editing a short film and had tremendous back pain just sitting at the flatbed editor (analog editing - this was a long time ago). At the same time my posture was horrible. An actress I knew suggested that I try The Alexander Technique. While not common in the US, The Alexander Technique is pretty much a defacto training aid for singers, dancers and most actors. It's a common course in Drama and Performing Arts programs.

I was desperate so I tried it. It was magic. After an initial jolt of progress it took several years but my back pain disappeared, my posture got better, etc. One premise of the Alexander Technique is that we are accustomed to use the muscles of our body (and back) to hold ourselves in bad positions and by proper training we can learn to not hold ourselves that way and do nothing instead. Doing nothing releases lots of muscle tension and lets our body behave the way it's supposed to. Over time the natural positions that are good for our body feel unnatural and a goal with Alexander is to make them feel natural again so we work our bodies more efficiently.

I realized that what I am trying to do with my woodworking is make it natural for me. I'm an amateur and I know I don't have to punch a clock on productivity. Since I have some dexterity (I can't draw or anything but I can follow a line) given enough time, and enough tools, and enough attempts I can build just about anything. But that's not the part of woodworking I am interested in.

It's like basketball. I know I can shoot baskets all afternoon and get some in. But what I want to be able to do is be able to sink baskets consistently. Craftsmanship is about certainty. So far, gosh darn it, I'm nowhere near that point.

And maybe that's what being a craftsman is. It's the ability to make something by hand in a consistent production-like manner. Whether it's a master craftsman making folding knives at so much a dozen, or a master craftsman carving gargoyles in a church, what separates the master from the beginner or the amateur is the ability to work consistently and fast. The master knife-maker may be repetitively working on a small group of unoriginal designs but he can work materials with certainty and ease. The master working high on a scaffold carving figures into stone might have more freedom in design than the knife-maker but what ties them together is the fluency with the work. An amateur—even one producing amazing stuff—simply doesn't have the practice and training to reach that fluency.

Once the fluency of the work has been mastered then for some craftsman there can be a liberation of design and an interest in pushing the envelope on what can be done. Unfortunately for most craftsman through history the opposite has been true, Henry Mayhew in the 1850's quotes a craftsman who basically states that in order to make a living there is no room for branching out. You have to be able to maintain production speed at what you know to make a living.

Tools & Craft #3: How to Saw Straight, Part 2: The Alexander Technique