Don't let a lack of tools paralyze you! Also, a woodworking lesson in a pastrami recipe

This post is really for beginner furniture makers. If you're already happy with what you're accomplishing, skip this entry and come back next week. But if you're the person who reads the blogs and maybe has some tools, but finds the road to furnitureville insurmountable, this blog entry might be a little energizing.

A short digression relating cooking to furniture making: When I'm not pontificating about tools, I'm usually trying to get three squares on the table for my family. In the past four years my cooking has been greatly influenced by the following two books and a website.

Cheater BBQ: Barbecue Anytime, Anywhere, in Any Weather by Mindy Merrell and R. B. Quinn. This book gave me a great solution for how to get that great BBQ flavor in a NYC apartment.

Artisan Bread in Five Minutes a Day by Jeff Hertzberg and Zoe Francois enabled me to make homemade rye bread, better than I can buy, for almost no work. (The book has tons of great recipes but if I can make rye bread why bother with anything else?)

The website www.vahrehvah.com. I not only learned how to cook Indian food, I learned a basic casual attitude towards recipes that really liberated my cooking and cut down on the time I spent making stuff. His videos are great and really encouraging and he has the simplest, least expensive kitchen setup of any chef I have ever seen on TV. 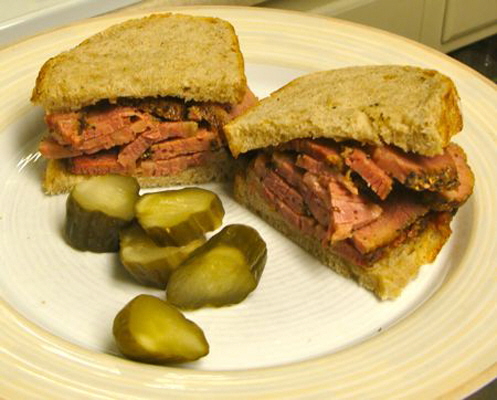 That being said, finding the Cheater BBQ book made me want to make cheater pastrami—pastrami being one of my favorite foods and that was a fun adventure you can read about here.

Now the impetus for writing this blog entry was the publication of my recipe for cheater pastrami, but as I thought about this I realized there is a woodworking lesson to learn from this.

It's easy to be paralyzed by perfection. A lot of people feel that unless they have the perfect tool they can't do anything. Instead of working with what they have and practicing technique, they agonize and stay in a state of paralysis waiting until they have cut the perfect dovetail in a practice piece with the perfect saw, set up a dedicated sharpening center, and built the perfect shop.

It's paralyzing and discouraging. Also I bet you get a lot of comments from your family about when you will finish anything.

To start building furniture you need the following things:

Everything else is frosting. Now I admit I'm part of the problem—I want to sell you the perfect dovetail saw or mortise chisel and now a veneer saw. Hey, it's my job—I'm more to be pitied than judged. My tools will make making things easier, and as your work gets better, better tools make the job less frustrating and more productive. So yes, you might want to buy some nice tools in the future.

But for now, don't let the lack of tools paralyze you. The trick when you are beginning is to figure out what you want to make, design the item to work within the range of what skills and tools you have and then go for it. The big secret of woodworking is that anyone, even rankest beginner, who manages to bring anything out of the workshop into the light of day is hailed as a craftsman by people who have never tried to make stuff. They won't see the flaws you see. They will complain about the color and the size, but they won't notice the gaps in joinery (especially after you fill them with wax). They will cheer you on to the next project. I promise. And practice will make it perfect.

The way to learn to saw straight, the way to plane accurately, sharpen, and etc. is to practice it, and pay attention to what you are practicing so you learn from your mistakes. Complicated projects can be broken down into manageable pieces, and with each project, you will get better. Here's just one idea to get you making sawdust: The first project in The Joiner and Cabinetmaker is a nailed together packing crate. You don't need many tools to make it. It's only marginally useful when it's done, but if you are learning to use tools I can't imagine a better use of your time than cutting up and nailing together a box. Go for it. It's easier than you think and it will push you forward.