Notes on Tools and Craft

I see a lot of people using a western style (cut on push) dovetail saw having trouble starting the cut and then continuing smoothly onwards. The reason almost never has to do with the saw. Most people seem to start a cut with the saw resting on the trailing edge of the work (fig 1): 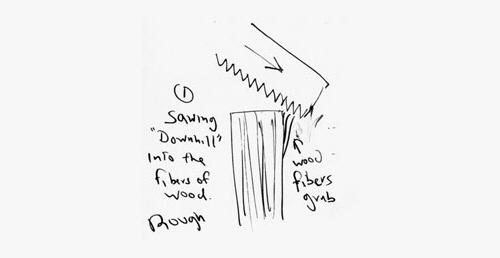 This is due to a combination of the height of the average workbench and the hang of the typical mid-19th century style repro dovetail saw. Then they find the saw hard to start and, even after starting, jumping in the cut. This is true even if they first form a groove in the wood by pulling backwards on the saw. The reason is that wood is composed of a bunch of fibers and by starting on the trailing edge of the work they are cutting "downhill" directly into the fibers of the wood, which want to stick up, catch, and in general cause trouble. It's like rubbing a dog's fur the wrong way. It's exactly like trying to plane against the grain of the wood.

Just for jollies, try starting a cut on the leading edge. It may take holding the saw tilted up more, although with a traditional 18th century pattern saw with a high hang and cant to the blade it will be easier. The difference will be immediately apparent. Instead of trying to splinter off the end of lots of fibers of wood, you are planing "uphill" and shaving off fibers of wood with the grain. The saw will start easier and cut smoother. Don't take my word for it. Go to the shop and try this out. I'll still be here when you get back. 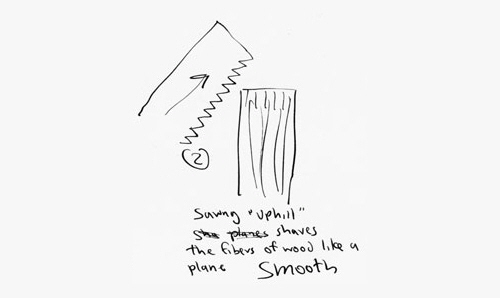 Ok. Now you see how much easier it is to start a cut and continue sawing.

When I saw, I hold the saw with the back about level, meaning I can only see the back when I look down. (fig 3):

The cant on the blade gives me just a little tilt up. Push the saw forward with no downward pressure and the cut is started. This also works because on a hand filed saw all the points of the saw distribute the force and it is less likely for any single tooth to catch. However, even with a stock, inexpensive machine made saw you will see an instant benefit from starting on the leading edge, sawing "uphill".

I should mention that with Japanese pull saws there is the same tendency to start on the trailing edge of the wood, but since you are pulling the saw towards you you are effectively cutting on the "uphill" with the same smooth result, just like cutting on the leading edge with a push saw.

I should also mention that some makers of western saws add a lot of negative rake to the saw teeth to mitigate this problem. This makes the saw smoother to start but you lose a speed advantage of having a more aggressive tooth. By holding the saw at the correct attack angle to the wood you can have a saw filed with zero rake cut very smooth and very fast.