Take a look at this picture—what do you see? 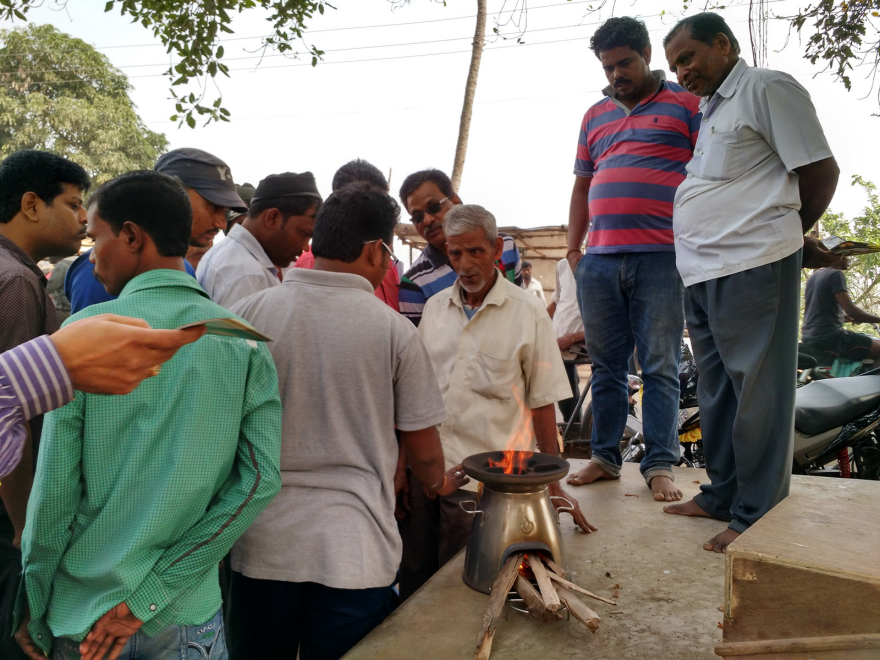 A bunch of guys standing around a cookstove—fairly unremarkable, right? To me, it's revolutionary.

I've spent the last 11 years studying the complexities of developing and distributing clean cookstoves across households living in energy poverty. Three billion people in the developing world still cook over smoky open fires every day, posing one of the greatest health and environmental challenges of our time. The smoke from these fires kills four million people annually (that's more than AIDS, TB, and Malaria, combined)—and disproportionately affects women and children.

Which brings me back to the photo above: in the vast majority of the households I have observed and worked with, men control the household purchasing decisions. Yet they often have little interest in what's going on in the kitchen—which means that investing in a clean cookstove is off their radar. That is until BioLite gave them something to care about.

BioLite is an Energy Company

Many households in developing markets face an energy paradox: rates of consumer electronics ownership (such as a mobile phone) outpace rates of electrification, requiring people to spend time and money charging their devices at recharge shops. The male heads of household may not care about a cookstove, but they definitely care about keeping their phones on. BioLite saw this underserved need and realized it could convert a small portion of energy from a cooking fire into usable electricity, accessible via a USB port. The stove now had the potential to become an energy hub for the home, solving for both cooking and charging needs. 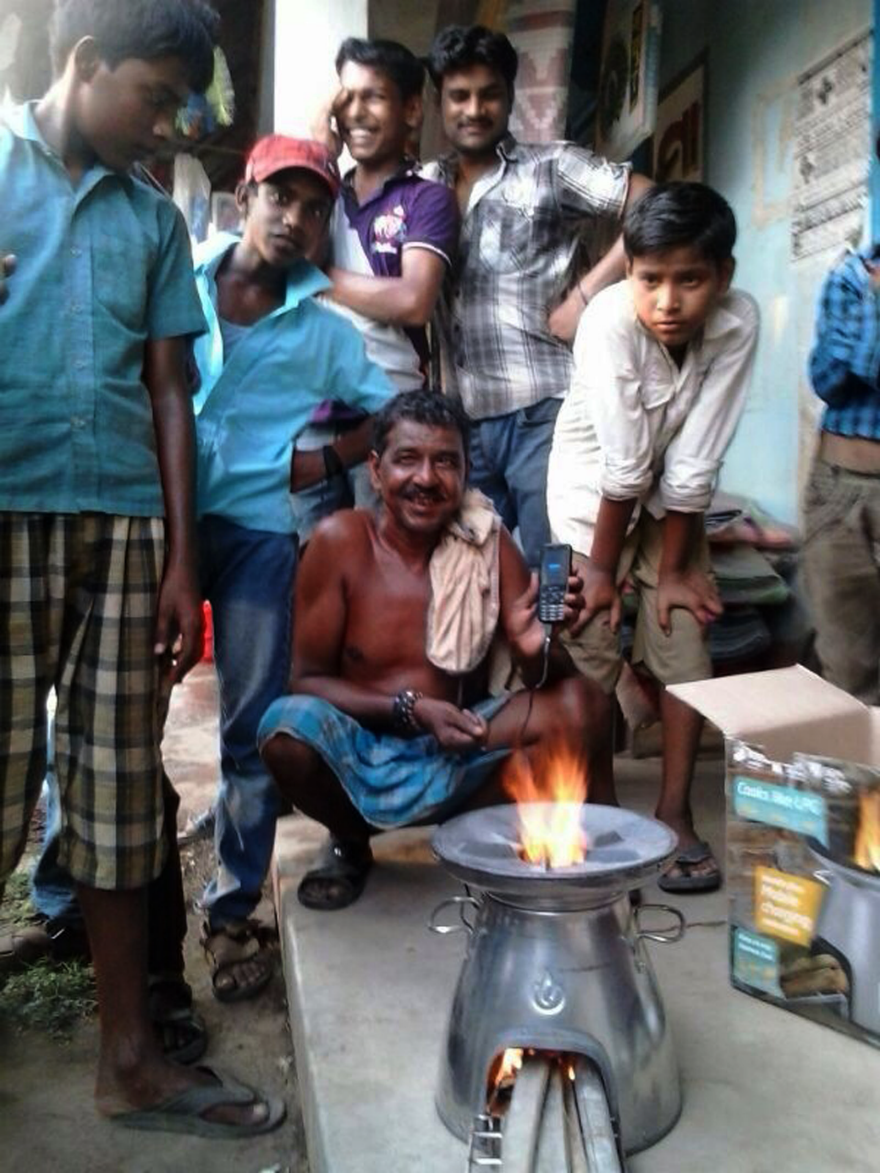 Here at BioLite, we believe that a product is only good if people actually use it – which means we need to take the time to deeply understand how people cook, what fuels they use, the challenges they face (e.g., cooking with wet wood during the rainy season), and how and where this intersects with other energy needs. This is the key to creating a meaningful solution that ultimately drives long-term adoption. This is where we hope to succeed where others have failed—and believe me, plenty of people before us have stumbled in a big way.

Perhaps the most striking example is when the government of India, in the 1980's and 1990's, distributed over 30 million mud stoves free of charge to families living in rural villages. This program failed because the stoves couldn't withstand daily use, broke easily, and nobody was around to fix them. Established companies have run into similar problems; in the 2000's, BP (British Petroleum) marketed a stove in India that required electricity to run, which rural customers didn't have. Additionally, it required the use of expensive fuel pellets, which rural customers didn't want to pay for, as they had access to freely available wood, cow dung and crop waste as fuel. The product did not catch on.

In both of these occasions, the stoves failed because they weren't designed to be consistent with customers' daily realities. By engaging the male heads of household with a benefit relevant to their everyday life, we cross a major hurdle; we've got purchasing power on the table. But the real test lay in succeeding with the female head of the household. For her to adopt us, we need to make sure we're adapting to her.

Cooking and Culture: The Deep Roots of a Flame

Cooking over an open flame has sustained generations of cooking traditions. Small details like when to flip a chapati or stir the pot of stew, have become secondhand. Signs of success come from the perfect char on a chapati, the wood fire-infused flavors of a stew, or the starchy pull of boiled cassava. And we need to preserve that.

The HomeStove is designed to provide the user with the feeling of an open fire, but without the associated toxic emissions. Our biomass stove still produces a visible flame, but with half the fuel and 90% less smoke. The result is a fire that can deliver the same flavors, consistencies, and cook times, all while using a variety of biomass fuels, greatly increasing our chances of long-term use.

What's more is that in India, the stove is much more than an appliance; it's the spiritual center of the home. Many Indian households bless a new cooking stove by letting a pot of malai (or cream) boil over into the fire—a ceremony which reaffirmed we needed to make our stove with non-corrosive materials. If our stove was going to hold up, it had to be responsive to deeply rooted traditions. As a result, the body of our stove is made entirely out stainless steel and cast iron.

A Global Stove With Local Relevance

BioLite operates across India, Uganda, and Kenya; distinct countries with many distinct cooking cultures, locally available fuels, weather seasons, and household dynamics. Our next step was to ensure we were designing a cookstove that could satisfy an array of cooking styles to meet local customs. Over four years, BioLite's team iterated four full generations of prototypes, based on field research in six countries with hundreds of households, before finalizing a design that matched these diverse cooking contexts.

Scroll through the above interactive map to learn more about how design research across different geographies has informed the final design of the BioLite HomeStove.

So we've got the insights, we've built the product, and we've introduced it to people – now the real test lay in the first few months of a new HomeStove owner. Quick familiarization, ease of use, and durability are key to regular use in those first few months, the strongest indicator of longterm adoption. This is why at BioLite, each time a HomeStove is purchased, a team member properly trains the family how to use the stove, removing operator error as barrier.

We also regularly call every customer who has purchased a stove to ensure they're having an optimal cooking experience and schedule in-person follow-ups if customers report performance issues or other complaints. Think Maytag Man, 2.0.

Archana, BioLite's Program Manager in India, recently traveled to Badgaon to meet with Rekha, a woman whose family purchased their HomeStove six months ago. As Archana walked into their home, she noticed Rekha's husband seated next to the stove charging his phone while Rekha cooked dinner.

"I've never seen a husband spend so much time in the kitchen here!" Archana remarked on a recent team Skype call, "it's remarkable to see how much the entire family is centered around the stove when it's in use."

During her visit Archana learned that Rekha now cooks each of her family's meals on it, a powerful sign that longterm adoption looks strong. Many first-time users may 'try out' the HomeStove for a meal or two, but this has now become Rekha's primary cooking surface. She loves that the HomeStove cooks her dishes just as well as her previous fire but requires less than half as much fuel, meaning that she spends less time collecting wood each week. 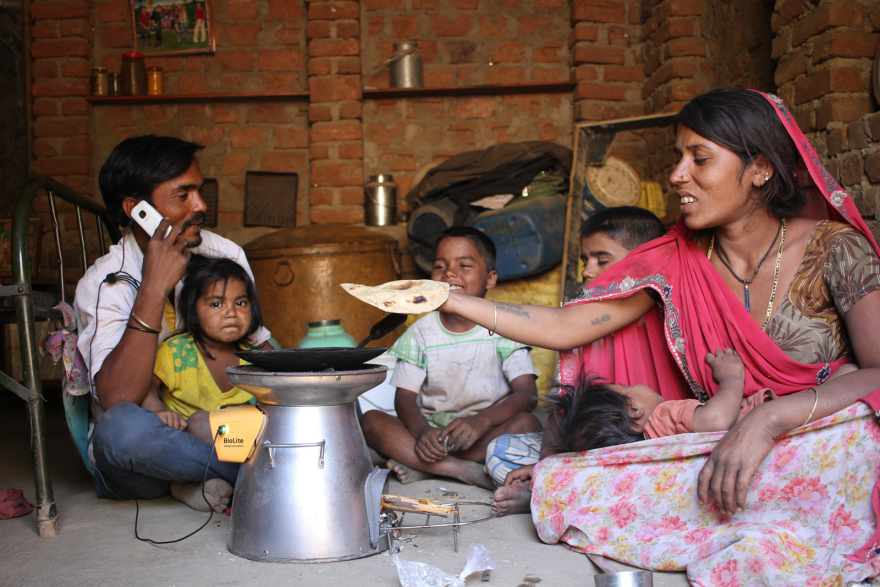 Rekha cooks a meal on the HomeStove while her husband charges his phone.

Through spending years of research with potential customers we have been able to design and develop a solution that resonates with our now very real customers. Today, there are thousands of families like Rekha's that have replaced their smoky open fires with the HomeStove, maintaining traditional cooking practices while ushering in the added benefit of electricity to meet evolving household needs.

But there's a lot more to do—millions of homes that could benefit whom we have yet to reach. Getting our stoves to these families means establishing distribution networks that can reach the most rural and remote villages in each of the countries that we work. We designed the stove, now we have to design the distribution networks to get them out there.

Stay tuned for Chapter 5 of BioLite's Road To Impact Series where we dive into distribution and follow the path our first 1,000 stoves took on their way into the market.