Storytelling is a powerful tool in any discipline. But in the realm of design, storytelling is an integral part of the practice with applications across all phases—from defining the problem, research, prototyping to communicating ideas to the client. At this year's Core77 Designing Here/Now conference we're focusing on new strategies for storytelling as part of our theme on how design-led co-creation will lead interdisciplinary teams to build successful, game-changing products of our near future. 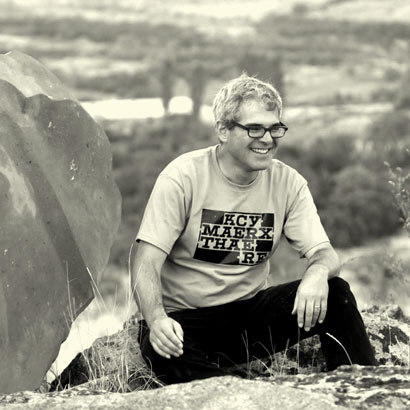 A born storyteller, Eames Demetrios is an author, filmmaker and director of the Eames Office where he communicates, preserves and extends the work and design heritage of Charles and Ray Eames. His current large-scale project is the Kcymaerxthaere, a parallel universe and a global artwork of multi-dimensional storytelling.  To date he's installed 123 markers and historic sites in 26 countries on six continents and is currently collecting the works in a print volume after a successful Indiegogo campaign earlier this year.  [Read more about the book here.]

In anticipation of Demetrios' upcoming talk about "Experiencing Wise, not Smart, Technology" at September's Core77 Designing Here/Now Conference, we speak to the storyteller about virtual reality, character development and being the Geographer-at-Large of a parallel universe. 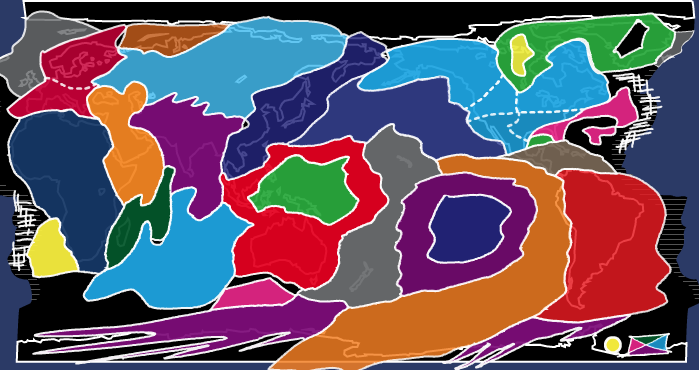 The gwomes, or nation-states, of Kcymaerxthaere overlaid over our world map.

Core77: What was the initial inspiration behind Kcymaerxthaere and when did you start working on the project?

Eames Demetrios: I thought it would be really cool to be able to visit a story—and not just any story, a work of fiction—even fantastical fiction. As I explored the concept, I realized how powerful it would be to help people see the things that aren't there and, above all, to use that as a playpen and framework for storytelling.

The Project started in 2003, but an early incarnation, which is still part of the project, was a story I wrote in 1993.

Why do you work with physical markers? Could the same level of storytelling happen just through digital means?

I don't think it could. Of course, one could tell the story in lots of ways (and we do have other story vectors too and some upcoming) and, indeed, not everyone will visit every site (or can), but my goal is to make most of the world's population within a day's drive of a site. Because even if you visit only one site, it changes your understanding of the experience. 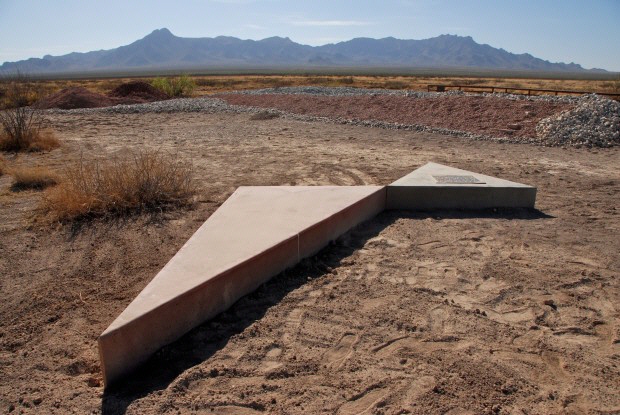 "Triangles" is installed 20 miles outside of Deming, New Mexico.

Human beings are so good at context—they bring that context to what they see. For example, it is very hard to look at a red car and only see the color red—that's because your brain tells you it is car before your mind even asks (not to be too anthropomorphic about the brain's workings). So by designing the project so the richness of the experience takes a quantum leap from just one marker, it means that even someone (which would be typical of most of the world's population) who saves up for a year for a 1-day bus ride to a site can have the core experience and encounter the rest online or in a book or in a library or school—informed by the experience of physically visiting. That also becomes a locally-facing experience which complements the outwardly-facing (what you might call cultural tourism) aspect. To tell a story to kids in a small town in Indonesia or Indiana and see their faces light up as they realize that THEIR local story is also installed in Indiana (or Indonesia)—and India and Chile and many other places besides—is fantastic.

As an aside: reading is a fundamentally strange activity. Most (by a huge majority) people see what they are reading, but if you had a camera in your eye, you would be seeing letters on page (or stone). So that means what you are seeing is NOT what you are seeing. We are hardwired to conjure. And that ability will be on a stone in 100 years whereas the odds of any specific digital technology being usable in identical form then is pretty low. I am not down on the achievement of virtual reality as most people think of it, and I am not a Luddite, but I really like wise technology. I don't want to have to run wires to remote places, or require it to have signal (and I complain about bad cellular coverage like everyone else), or build a solar panel to power a wifi node. I'd like it to be waiting and ready. 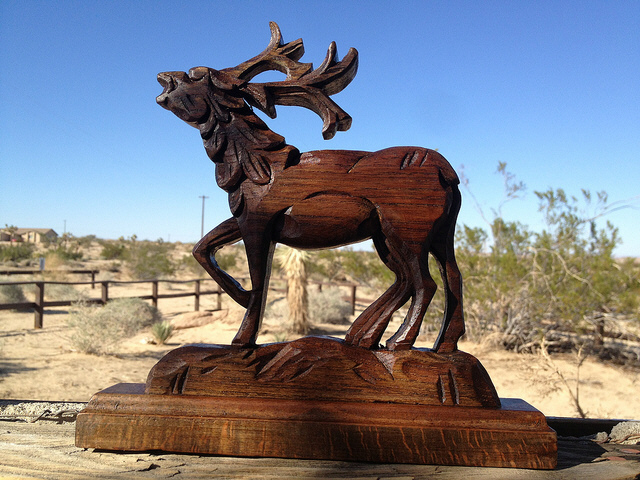 A wood carving from Albania of a gnacien, a seven-legged, deer-like creature.

Kcymaerxthaere has it's own languages, flora and fauna. Why is it important for this parallel universe to have a distinct population different than our own?

I don't know if it is important, but that's just the way Kcymaerxthaere is—or isn't— depending on how you look at it! (Makes it extra fun to be the Geographer-at-Large. And I have always liked to create stories help people imagine what is not there—yet.)

You've been leading workshops around the idea of "Disputed Likeness" where you ask audiences to create representations of a character or creature from the Kcymaerxthaere. What have you learned from the exercise?

I have always been fascinated by the fact that we call create our own images of characters in books. How we can argue over the movie version versus the book (Harry Potter was an amazingly considered example of radically capturing the internalized image of the characters—and yet many people still had their own). But it is not just movies—the image of the Christian Madonna and Child is different in a Russian Icon, an Italian painting, a Kenyan painting, a Mexican mural and a work of outsider art in the US. However, they all look fundamentally the same. Because they represent the same story and a basic shared understanding of that story. Same with the Ganesh image—many different ones. But a child recognizes they are in the same set. Heck, we even argue about who is a better James Bond and that is 6 (or 7—don't get me started) different actual human beings! 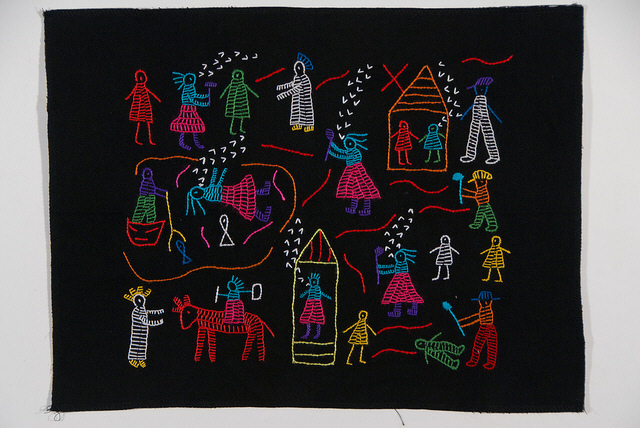 An embroiderer from the Penduka collective in Namibia interprets the story of Eliala Mei-Ning, a singer whose voice was too beautiful to be concealed.

So I wanted the visualization of the world to not even be nailed down 100% — to be precise but uncertain: to be Disputed Likenesses

Besides your recent Indiegogo campaign to create a book, what else can we expect from the project in the near future?

The book (our IndieGoGo campaign) is a huge project—it is a collection of all the markers as of this summer, translated into multiple languages. The idea is give a copy of that book to a library and a school near each Kcymaerxthaere site so that local folks will have access in their own language to the richness of the stories.

Learn more about storytelling and the Kcymaerxthaere at this September's Core77 Conference in Los Angeles. Buy your ticket today!