Los Angeles owes a huge debt to Charles and Ray Eames, who helped champion the city as an exceptional home base from which to design and innovate. But there's more to L.A. design history than just the Eameses' story. Throughout the 20th century, L.A.'s delightful climate, strong manufacturing base and Hollywood-adjacent industries have helped to nurture a strong design community.

Join us September 29-30 for the Core77 Conference in Downtown Los Angeles. Buy your ticket today!

Like the rest of California, L.A. is known for a culture of experimentation—architect Richard Neutra said it best when he wrote that L.A. attracted "people who were more 'mentally footloose' than those elsewhere"—and it's these people who have helped to create an environment where design can flourish. Here are a few ways how: 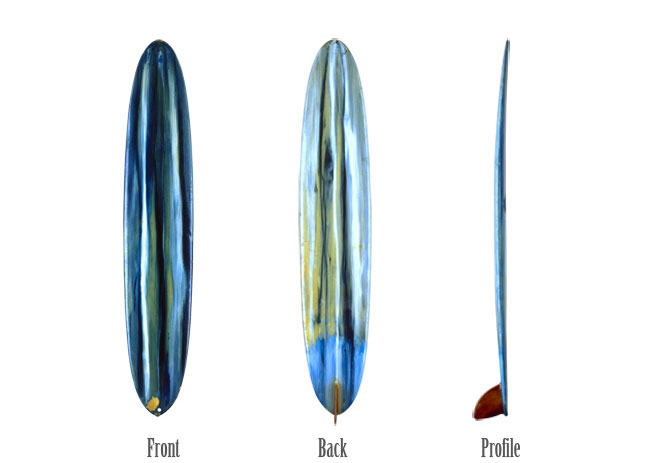 An early polyurethane foam and fiberglass surfboard from 1956 made by Dave Sweet. Photo via the collection of the Surfing Heritage & Culture Center 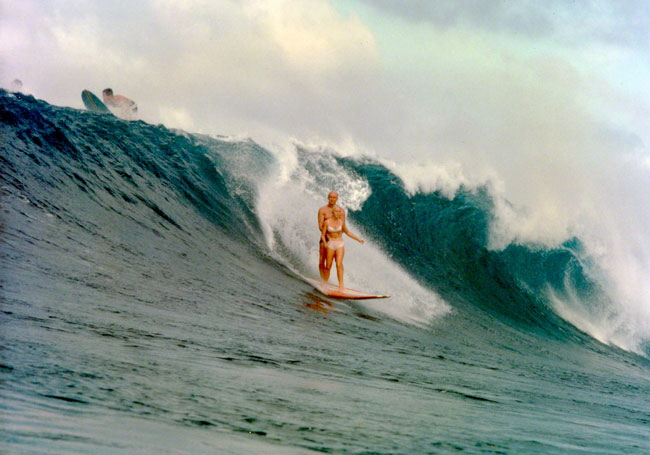 During World War II, Los Angeles's aircraft manufacturers ramped up not only their production efforts but also their research and development of new materials and manufacturing techniques, playing an important role in supporting America's war efforts. After the war, these innovations began to trickle down to the region's designers, who were keen to experiment with new commercial applications of military materials. Those materials also found their way into Southern California's surf community when avid surfer and Douglas Aircraft plastics engineer Brandt Goldsworthy and surfer Preston "Pete" Peterson teamed up in 1946 to create a revolutionary new fiberglass board. Previously used for aircraft nose cones and radar domes, fiberglass was the key to transforming the surfboard's humble (and heavy) wooden design into a sleek new object that could be enjoyed by the masses. With the advent of even lighter and cheaper boards in the mid-1950s that used polyurethane foam covered in fiberglass and resin, a nationwide surf craze was born. 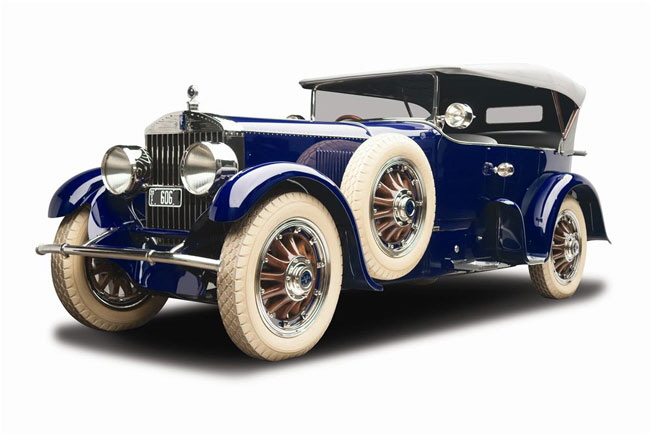 Earl customized the above Pierce-Arrow for Fatty Arbuckle in 1919 at an estimated cost of $32,000 (a huge amount of money at the time).

2. A car design legend got his start in Hollywood

Long before Pimp My Ride, L.A.'s rich history of automotive design and manufacturing produced a number of influential figures, including Harley J. Earl, General Motors' first design chief. Born into a family of coachbuilders and automotive body makers, Earl honed his skills in his father's L.A. factory before taking over the company's custom body designs. He found himself in high demand in Hollywood, where he customized cars for wealthy movie stars and directors like Fatty Arbuckle, Mary Pickford and Cecil B. DeMille. In 1926, G.M. approached Earl to design the first Cadillac LaSalle; the following year, it asked him to join G.M. permanently to create the auto industry's first full-time design department. Earl would lead G.M.'s design from 1927 until 1959, introducing America to the tail fin and the Corvette, and famously hiring the so-called Damsels of Design. Many consider him the Los Angeles–born father of modern automotive design. 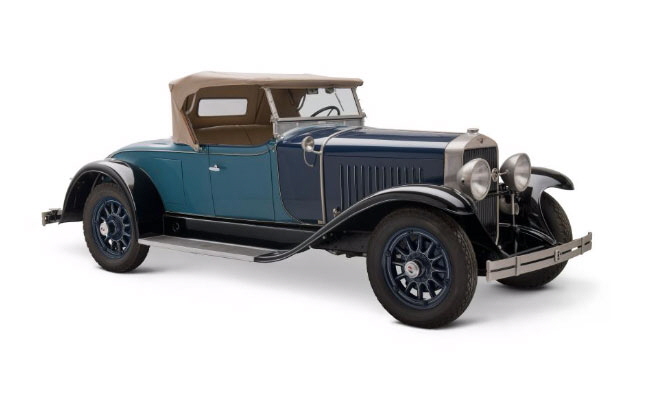 The 1927 LaSalle Roadster was Earl's first design for General Motors. Photo from the collections of The Henry Ford 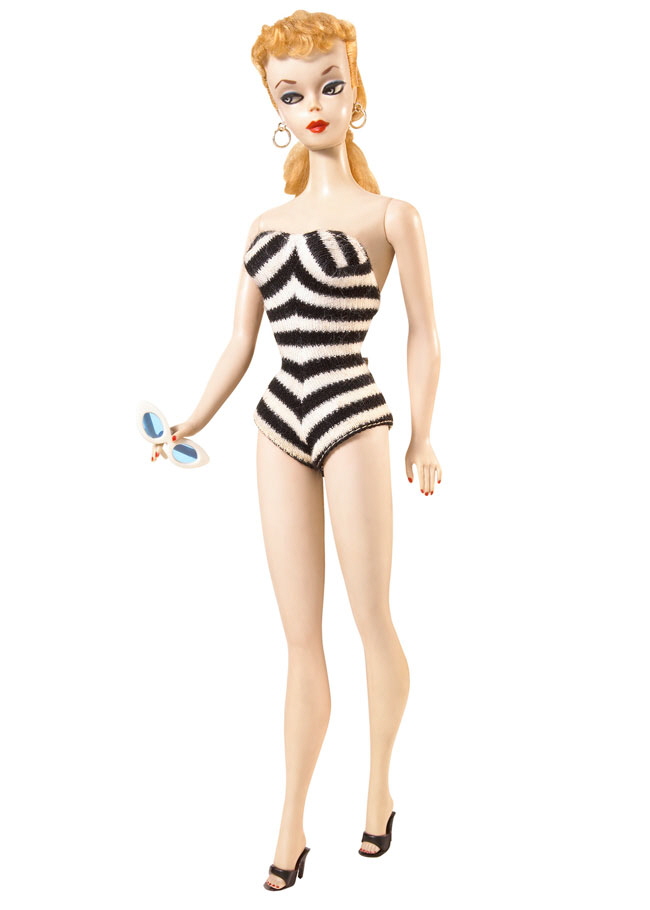 It may come as a surprise that one of America's largest toy designers and manufacturers was launched from a garage-workshop in El Segundo in 1945. From this unassuming base, Mattel, founded by Ruth and Elliot Handler and Harold "Matt" Matson, created a sensation when they introduced the Barbie doll in 1959. In her striped bathing suit and cat-eye sunglasses she quickly became an ambassador of Southern California style and design, witnessed in her original mid-century modern Dream House (with Eames-inspired couch) from 1962—and, for better or worse, in her new 2014 McMansion with not one but two elevators. 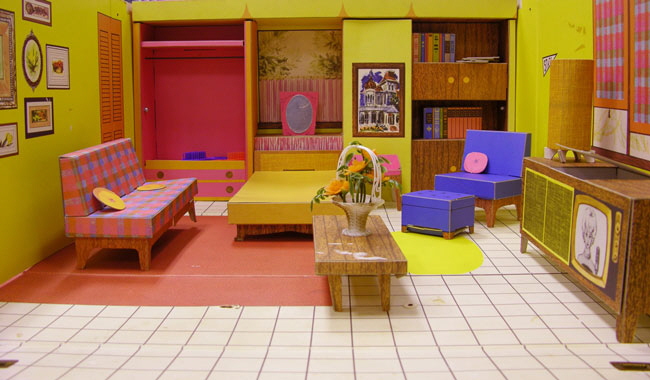 4. An L.A.–hating transplant gave the city a stylish new look

When architect John Lautner arrived in Los Angeles in 1938, it was far from love at first sight: "When I first drove down Santa Monica Boulevard it was so ugly I was physically sick for the first year I was here." Known for his cinematic homes like the Chemosphere ("Body Double"), the Sheats-Goldstein house ("The Big Lebowski") and the Elrod home ("Diamonds Are Forever"), Lautner also inspired a completely new style of commercial architecture with his 1949 Googie's coffee shop in West Hollywood. His space-age architecture was quickly adopted by other coffee shops, bowling alleys and gas stations in the region, and the term "Googie" was coined to describe their upswept roofs, large glass windows and deployment of starbursts, amoebas and flying saucer forms. Leaving his mark on L.A.'s urban fabric must have made the city a little easier for Lautner to stomach: he stuck around another five decades until his death in 1994. 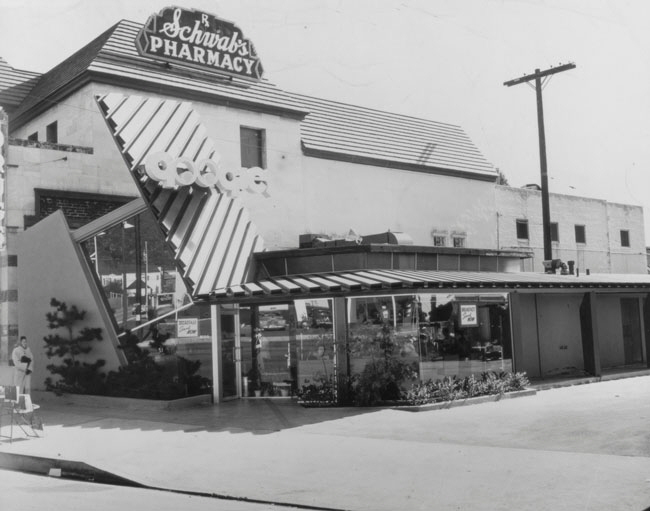 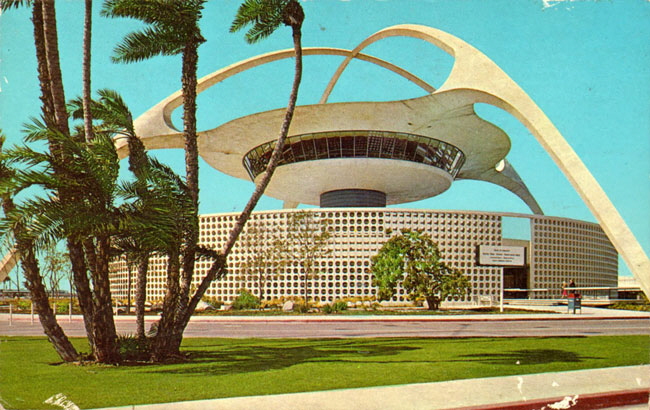 Another example of Googie architecture, the UFO-shaped Theme Building at Los Angeles International Airport designed by Pereira and Luckman, 1961 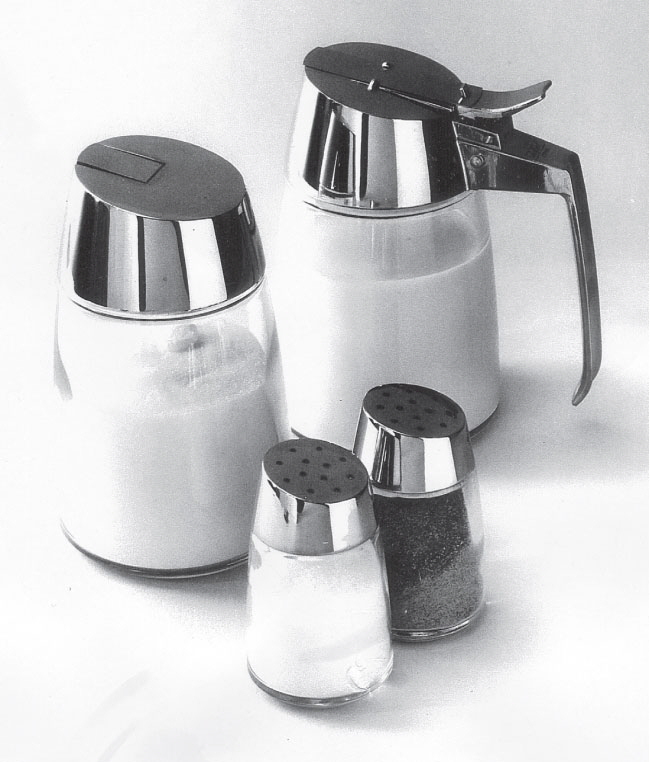 While Googie architecture revolutionized the exterior of Southern California's coffee shops, Los Angeles–based industrial designer Henry Keck was busy modernizing the humble implements inside. His glass-and-chrome syrup dispenser will be familiar to anyone who has ever climbed into a diner booth and ordered a short stack of pancakes. It matches his equally well-known salt, pepper and sugar shakers, which he designed for the Dripcut Starline Corporation in 1957 (and which are still available today). Keck estimates that more than 25 million sugar shakers alone have been sold since his design was introduced. 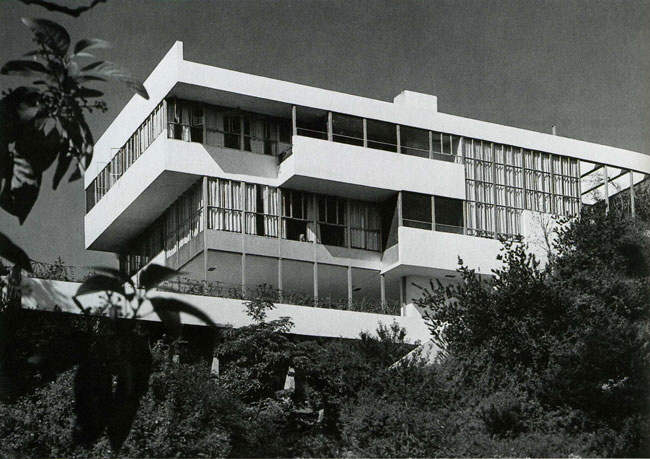 L.A.'s design and architecture community was enhanced by an influx of European modernists who found a welcoming climate and an openness to experimentation. Austrian architects R.M. Schindler and Richard Neutra arrived in the city and were immediately besot by the idea of "healthful" indoor-outdoor lifestyles, finding clients that enthusiastically sought new ways of living. Meanwhile, Swedish furniture and industrial designers Greta Magnusson Grossman and Greta von Nessen found L.A. consumers were hungry for Scandinavia's austere designs. L.A.'s design emigrants also played a key role in developing what would become known as the "California look" by mid-century. As Wendy Kaplan writes in her introduction to Living in a Modern Way: California Design 1930–1965, "California modernism became a different, and hugely influential, model for the rest of the country and was widely admired abroad because it reflected the way people really wanted to live." 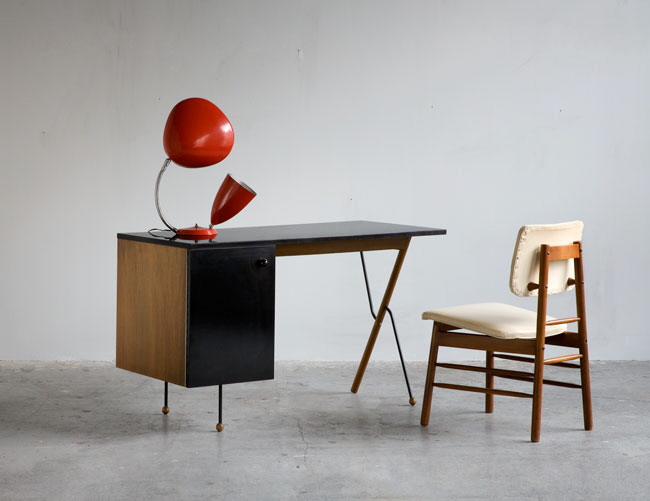 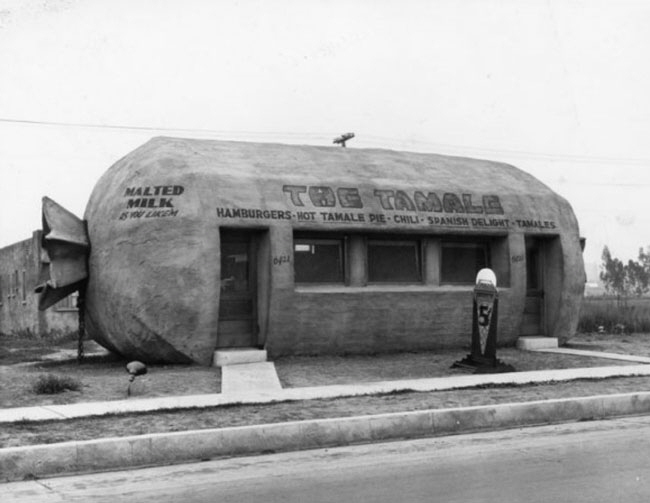 The Tamale, built in 1928. Photo via the Los Angeles Conservancy

What better way to advertise your "hot tamale pies" and other "Spanish delights" than to serve them up from a giant tamale-shaped building? With the rise of L.A.'s car culture in the late 1920's, programmatic architecture quickly sprang up to capture the attention of passing motorists with whimsical structures that telegraphed exactly what was being sold inside. While the Tail o' the Pup and the Wilshire Coffee Pot are now sadly gone, the Tamale (now a salon), along with the Darkroom (now a Tex-Mex restaurant) and the Donut Hole, all await your roadside pilgrimage. 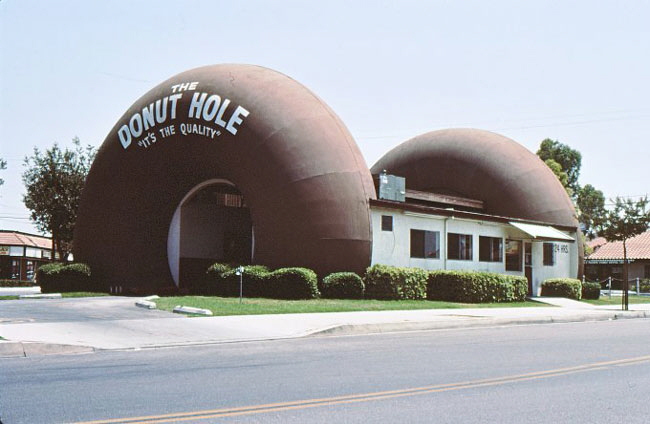 The drive-through Donut Hole, built in 1968. Photo via the Los Angeles Conservancy from the Tom Gardner Collection/Conservancy archives