Extrapolation Factory Wants Us to Pay More Attention to Our Future

Throughout life, we are constantly asked to think about the future, yet we're given very few methods, models or tools for doing so in constructive ways. According to Jim Dator, Director of the Hawaii Research Center for Futures Studies, our visions for the future are often colonized by mainstream imagery. We're bombarded with flying cars in Hollywood films and reductive red/blue political rhetoric, but only meager forums for constructing alternative visions. Despite the growing number of academic and expert visioning approaches, the general population is working toward collective futures with few tools at hand.

In an effort to open-source future research models through design, The Extrapolation Factory has been organizing experimental events that streamline expert futures research tools for use by everyone from government employees to public school students. Extrapolation Factory Operator's Manual, a new book written by The Extrapolation Factory co-founders Elliott P. Montgomery and Chris Woebken, captures the studio's democratized futures work and elucidates strategies culled from think tanks and futurists, as well as models and techniques the duo has developed for organizing collaborative futures explorations. 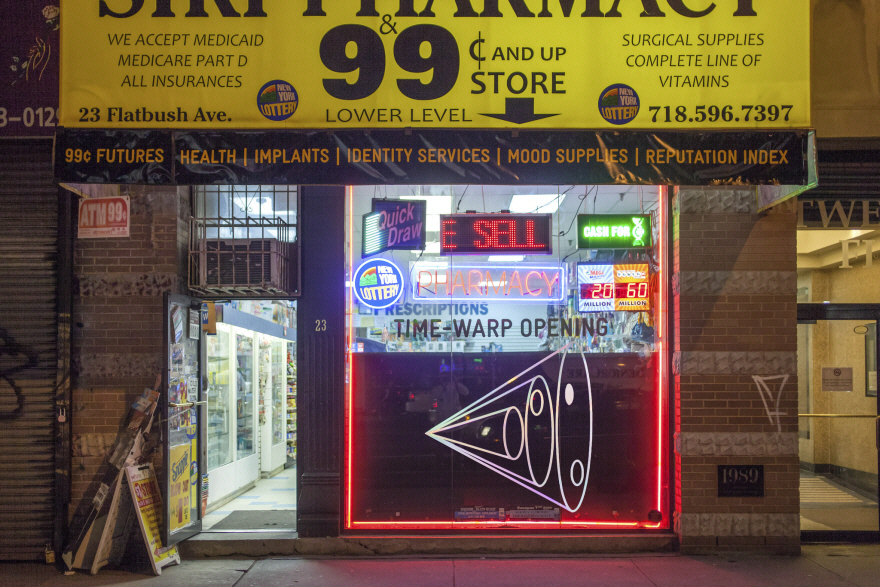 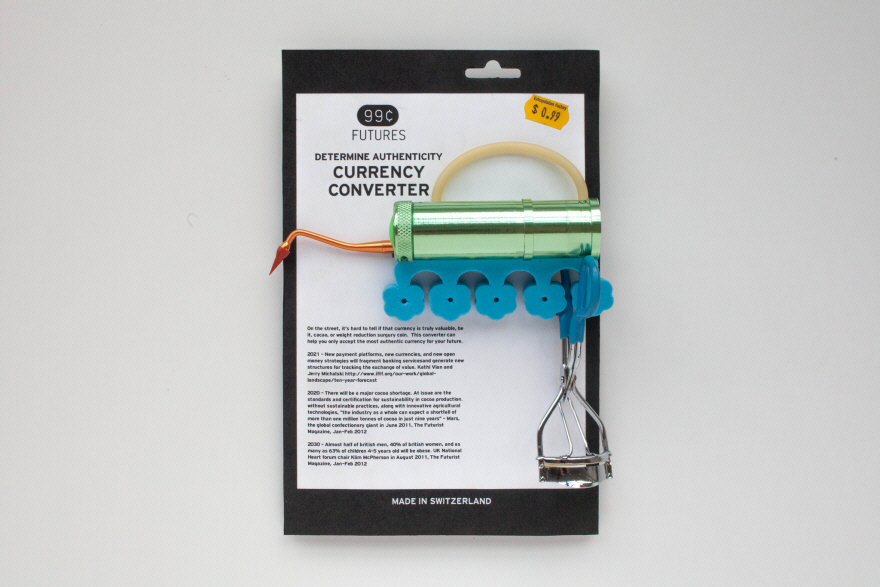 99¢ Currency Converter—one of the objects offered at the "Time Warp Opening."

The Operator's Manual unveils specific techniques and anecdotes from several years of experiments by The Extrapolation Factory, starting with the studio's original project, 99¢ Futures. At a workshop in February of 2013, Montgomery and Woebken asked a group of about 40 participants to imagine the products one might find in a 99¢ store of the future. The group was introduced to a database of emerging signals and expert projections, as well as a mental framework for organizing future scenarios. After the group conceived over 30 futures, built representative objects, and packaged them to share the respective backstories, the artifacts were reproduced and transported to an existing 99¢ store in downtown Brooklyn for a "Time Warp Opening". Neighborhood regulars mixed with invited guests, inspecting Home Transplant Kits, Instant University Degrees, and Space Suit Lining Replacements that were nestled among the standard shop inventory. The result was an experience in which observers momentarily stepped into a proposed future—just long enough to picture a new alternative—and then returned to reality. 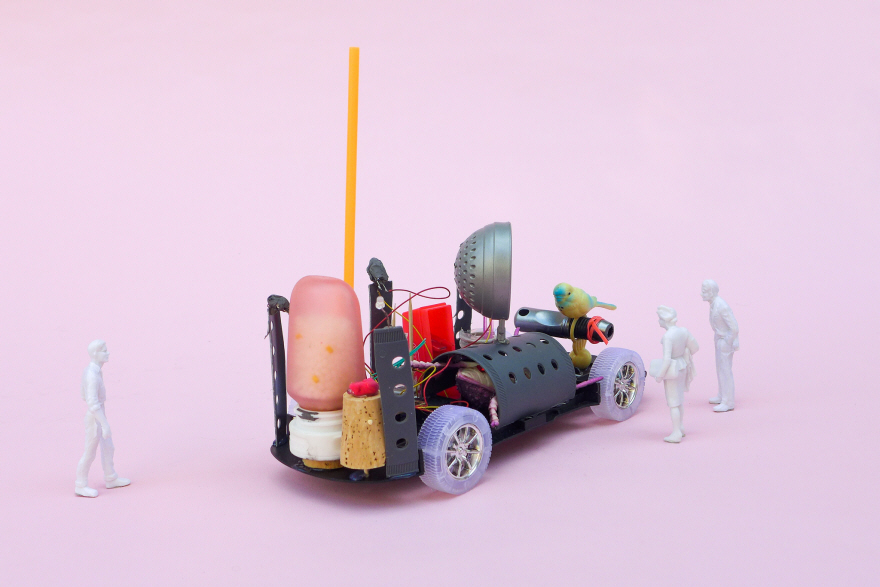 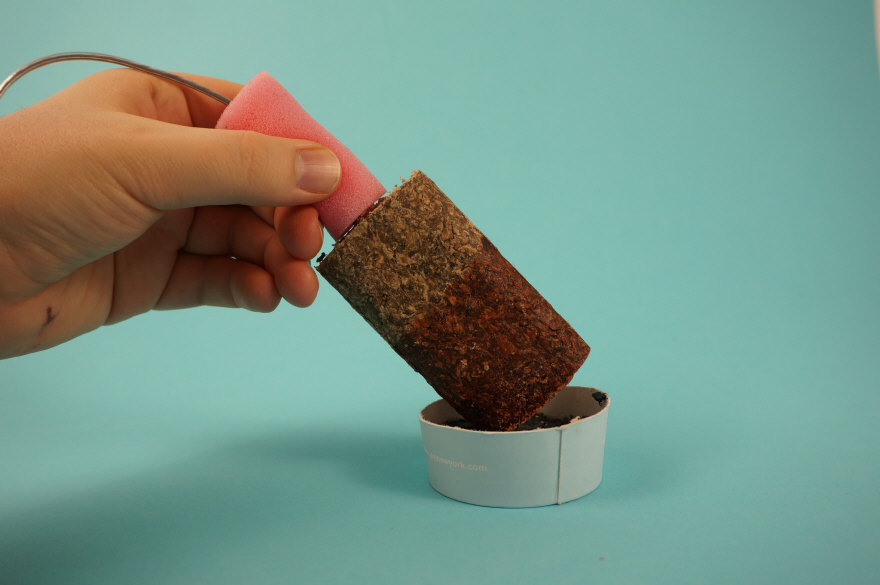 Changus from "Craigslist Barter" at SVA's Products of Design

The chapters in the Extrapolation Factory Operator's Manual follow the sequence of the studio's process. The manual starts with a look into the past, including a shortlist of futurists and designers who inspired the launch of the studio. Next, a series of frameworks for conceiving, organizing and analyzing future visions are introduced. Following the frameworks are chapters on making stories about futures, fabricating evidence from said stories, and contextualizing these bits of evidence in the world around us. The book concludes with a series of reflections—interviews with partners and colleagues addressing the value of democratized futures projects. Found within the book's final section are conversations with BLDG BLOG's Geoff Manaugh, Gastropod's Nicola Twilley, Autodesk futurist Andrew Hessel, Roy Campbell of the North Carolina Museum of Natural Sciences, Microsoft designer, David Benque, a former PS 147 student named Treasure, and Jim Dator. 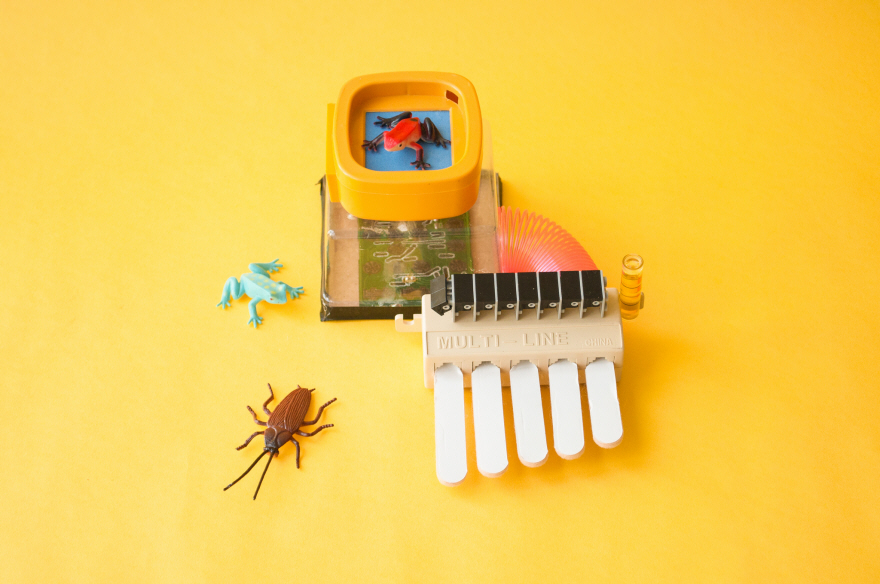 In their reflections, all of these folks have championed the democratization of futures studies through design. As social movements form in a flash, government leadership perches on shaky pillars, and technology whizzes a mile a minute, it seems that public access to futures-research is all but imperative. While there is great need for competent expert futurists, these visionaries should not be the only ones responsible for rigorously imagining future possibilities. All of us should actively envision the scenarios we want to live and work to identify paths toward those worlds. Ideally, the manual will serve many cultures and communities, not as a constrictive blueprint, but as a launchpad for envisioning more thoughtful, desirable alternatives for our collective futures.

"The Extrapolation Factory Operator's Manual was created with an incredible team of assistants. Thanks go out to Ava Burke for assembling the ideas into a manuscript, Lillian Tong for translating the book into Chinese, Sungmy Kim for crafting many of the illustrations and diagrams, Adam Ridgeway and Emma Verhoeven for designing and laying out the book, Ankita Roy for transcription, and Richard The, Frédéric Eyl and Lauren Wong for content feedback!"

You can purchase the Extrapolation Factory Operator's Manual on Amazon.

Extrapolation Factory Wants Us to Pay More Attention to Our Future