Can You Guess What This DIY Contraption is For?

Turn it over in your head

Time to put those design thinking caps on. Before you scroll down to the bottom for the answer, let's take a close look at this thing's physical features, to see if you can deduce why they're there. 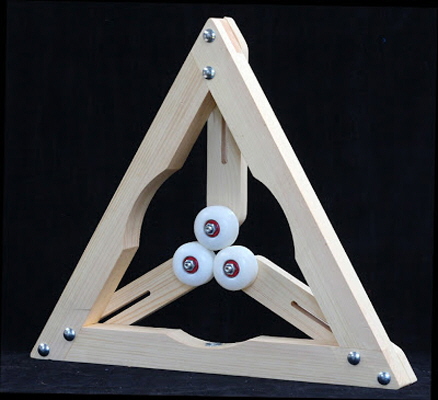 We see three wheels in the middle—why wheels? At the corners of the triangle, what see what appear to be the heads of carriage bolts, and the observant among you have noted the slots in the arms that terminate with the wheels. The truly hawk-eyed among you can see there appears to be some sort of fastener, that tiny glint of silver, in the center of the bottom-most piece. What's that for?

Here's the "back" of the thing: 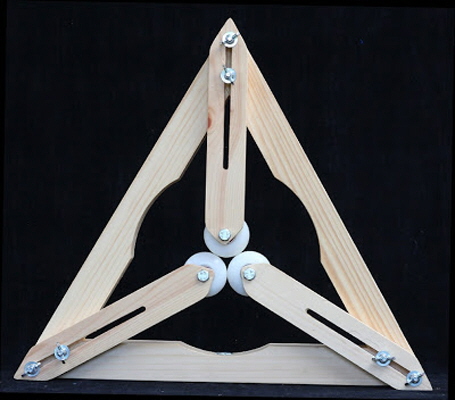 Now we see wingnuts attached to the carriage bolts riding in the slots. These arms are obviously meant to slide in and out, and if we look at the next photo… 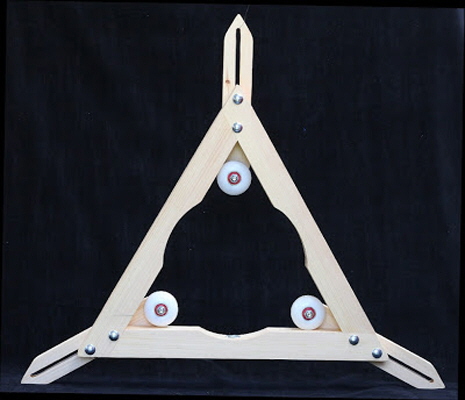 …we see that's the case. You also can't help but note that the aperture is circular. Another thing you'll probably notice is that with the two lower arms in this setting, they break the line of the bottom part of the base, meaning this thing is apparently not meant to rest on a flat surface, like a tabletop.

Okay, so what the hell does this thing do?

British turner Ken Garner makes these and sells them here.

I fully admit I couldn't guess what the things did. I stared at these images for a full 10 minutes before giving up. In retrospect, it almost seems obvious: The adjustable arms are clearly meant to accommodate items of different size within them, and the contact points being wheels indicate that the supported object is spinning.

Any of you get it right?

Can You Guess What This DIY Contraption is For?