A look at the people behind new creative enterprises in Detroit

Detroit established itself as the heart of manufacturing in the United States at the start of the 20th century, but recently the city has been making headlines as a morality tale on urbanization and the revitalization of post-industrial communities. Detroiters are proving that despite challenging circumstances, their hard work ethic hasn't gone anywhere. In preparation for IDSA's International Conference kicking off in the Motor City later this week, here's a list of artists and entrepreneurs featured on One of Many, a monthly series of photo essays about American cities and their creative communities. From a pickle factory to a company that makes convertible blankets for the homeless, these designers and creatives are making a difference in a city that rewards creative problem solving and tenacity.

Bonus: many places and people on this list are in close proximity to IDSA!

A Place to Gather 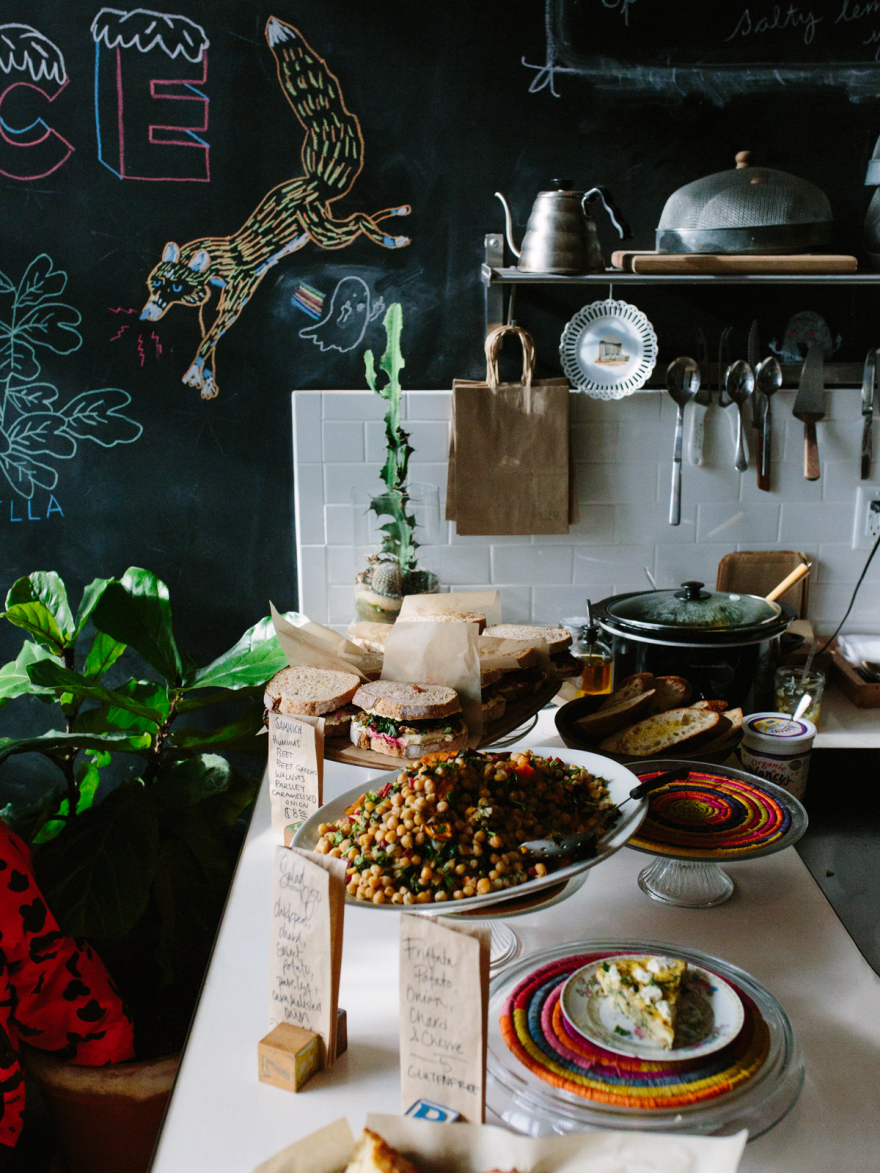 Daisuke Hughes and his wife Jessica Hicks opened Astro Coffee on the famed Corktown block. It was inspiring to see this husband and wife team operate as one. Jessica cooks all the amazing food offerings, while Daisuke focuses on the coffee program. He was trained at Monmouth Coffee Company, the premiere coffee house in England, and has also worked at the iconic Zingerman's Deli. After a stint in Jessica's homeland of Australia, the two moved to Detroit to be part of the movement to get this fine city closer to it's glory days. 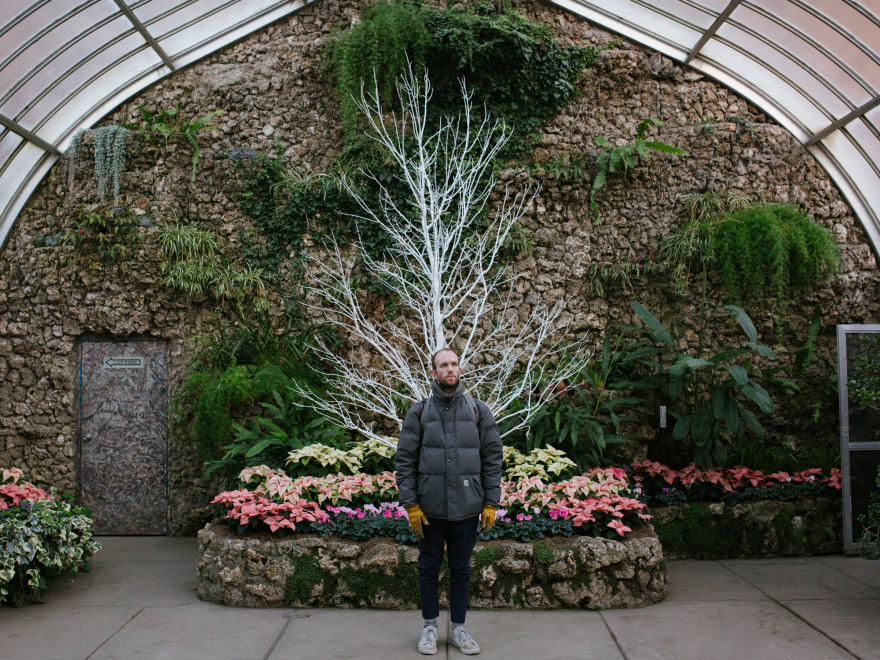 Michael Burdick is an illustrator and art director. He often collaborates with illustrator James Noellert, under their combined middle names Eugene-Carland. James explores the boundaries of what can be communicated visually. He splits his time evenly between personal and client work, which allows for ample inspiration to flow between both. As I made my way through the food and beverage community of Detroit, Michael and James' name and work popped into frame time and time again. From the Astro Coffee logo, to that of distillery Two James, to Supino Pizzeria, these two are quietly and elegantly making a massive positive impact on their community. 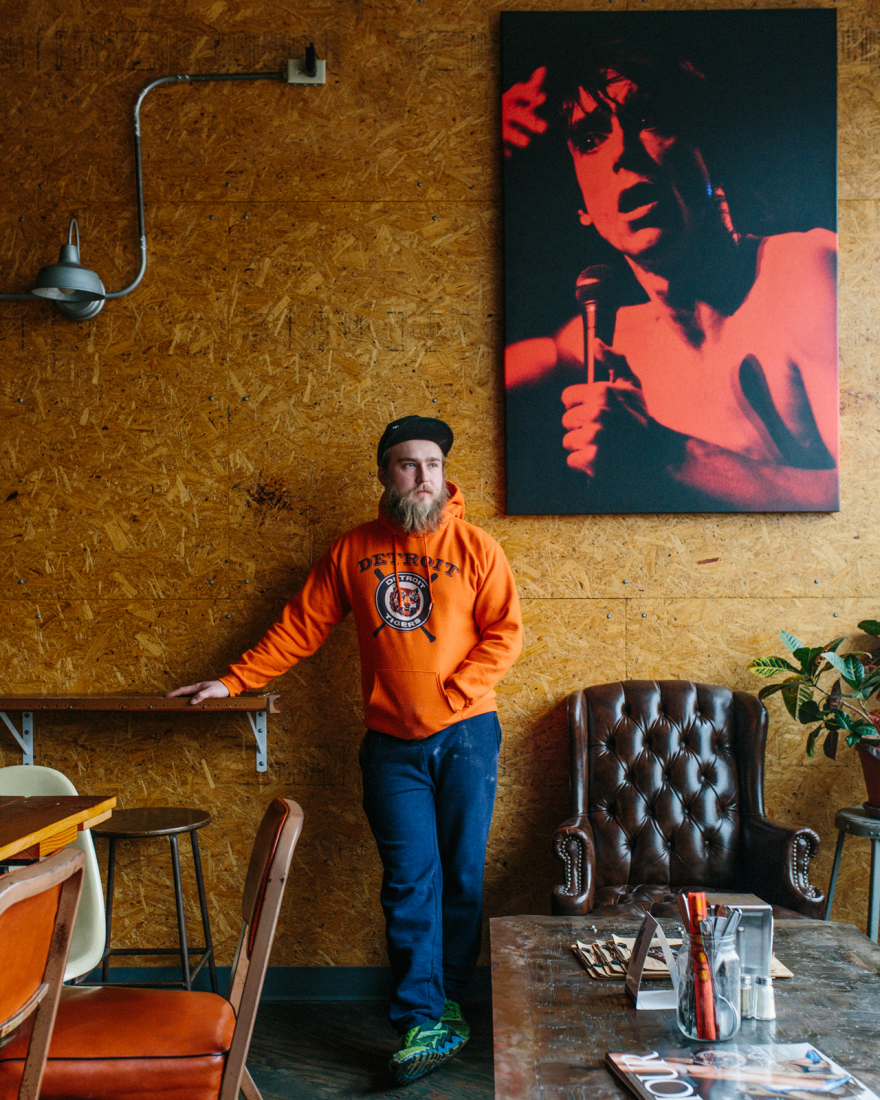 Nikita Sanches is the chef/owner of Rock City Eatery, and the recently re-opened 1940's greasy spoon joint Campau Tower, both in Hamtramck. But it all started with pies, which Niki made and sold at the Rust Belt Market, and they're still a popular item on his menu. Niki moved to Detroit at the age of 12 and has an immigrant's work ethic to show for it. The atmosphere amongst his staff is that of family, with people working hard because they care about each other, and former staff members still coming by to hang out all night. It's a pretty special place, with phenomenal food, and I highly recommend making it part of your Detroit experience. As a sign of success, Rock City is moving from Hamtramck to Mid-Town Detroit in early 2016 where it will be neighbors with the Shinola and Willie's stores.

Pack Up the Van and Go 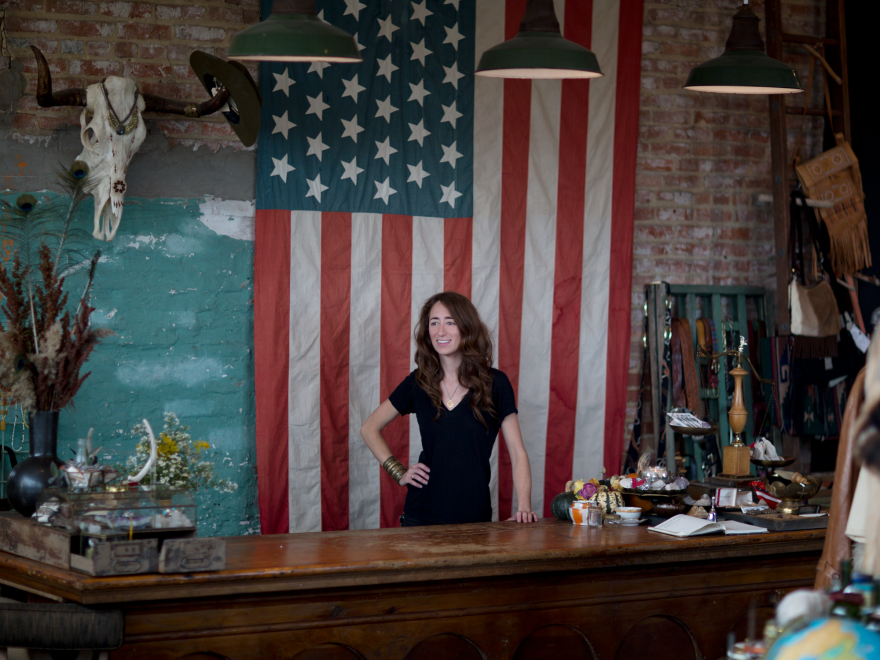 Erin Gavle was a cog in the wheel of the advertising world in NYC. She quit and, together with her cousin, decided to grab a van and drive from Los Angeles to Detroit. Throughout their trip, treasure hunting slowly filled up the van with all the best vintage clothing and accessories, which eventually allowed for Erin to open up the wonderfully charming Eldorado General Store, named after the lost city of gold and holy grails. 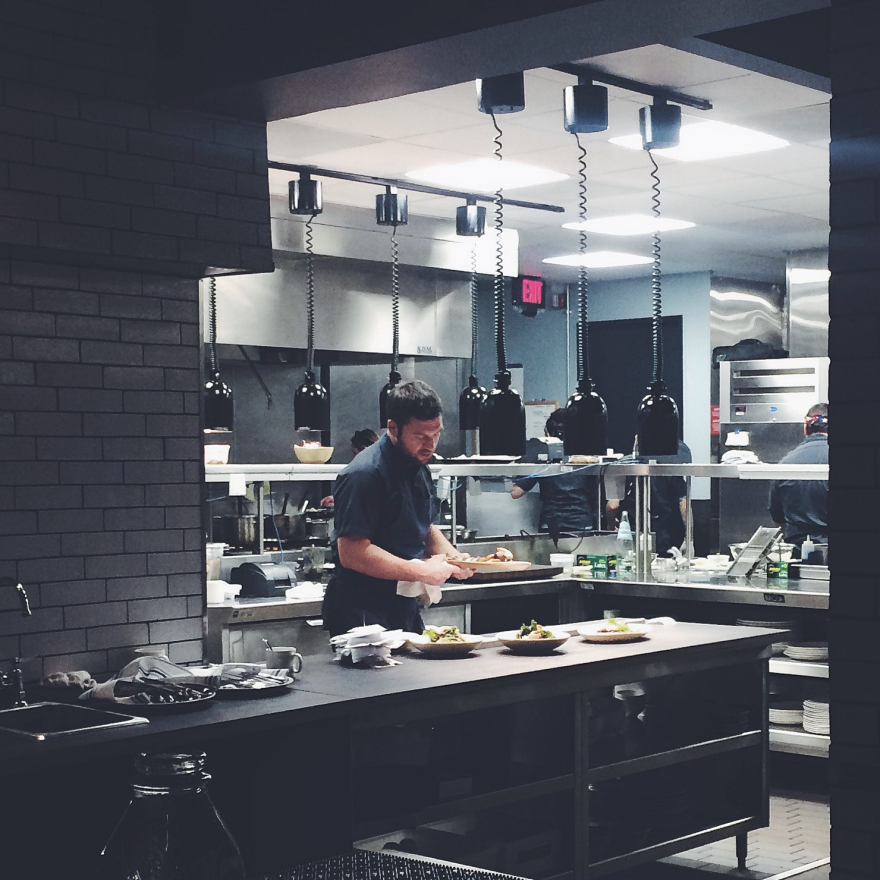 Executive chef, Andy Hollyday, is a partner at Selden Standard. Open kitchens are my favorite, and watching Andy take the best care of every dish before it went out, getting the little details right, was a study in professionalism and the art of hospitality. My first visit was right after the restaurant opened, yet it felt like a fully formed aesthetic presence in the middle of a food renaissance. My second and third visit were later that same week, as I sampled more dishes, all equally delicious, and each brought to me by ever-charming staff. My fourth visit was right after Selden's one year anniversary, and the team have tightened up the operation even more.

Fabric of the City 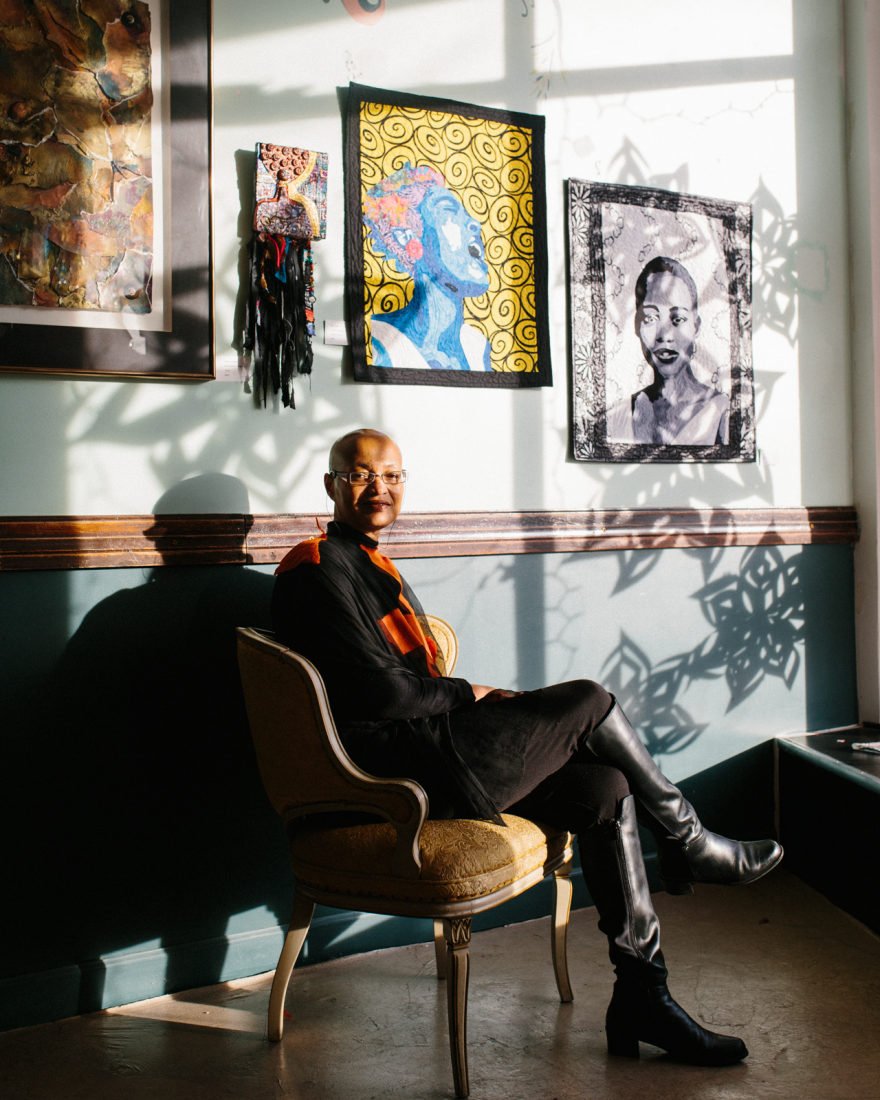 Mandisa Smith is the co-founder of Detroit Fiber Works, a store that offers beautiful, handmade home goods and clothing. Some of the items are made by Mandisa, like the top worn here, some by her co-founder Najma, and some by mostly fellow Detroit artists. Mandisa holds an MBA, used to work in the automotive industry, and like many of her peers, followed a winding path to find her passion at the end of a long piece of string.

Fabric of the City II 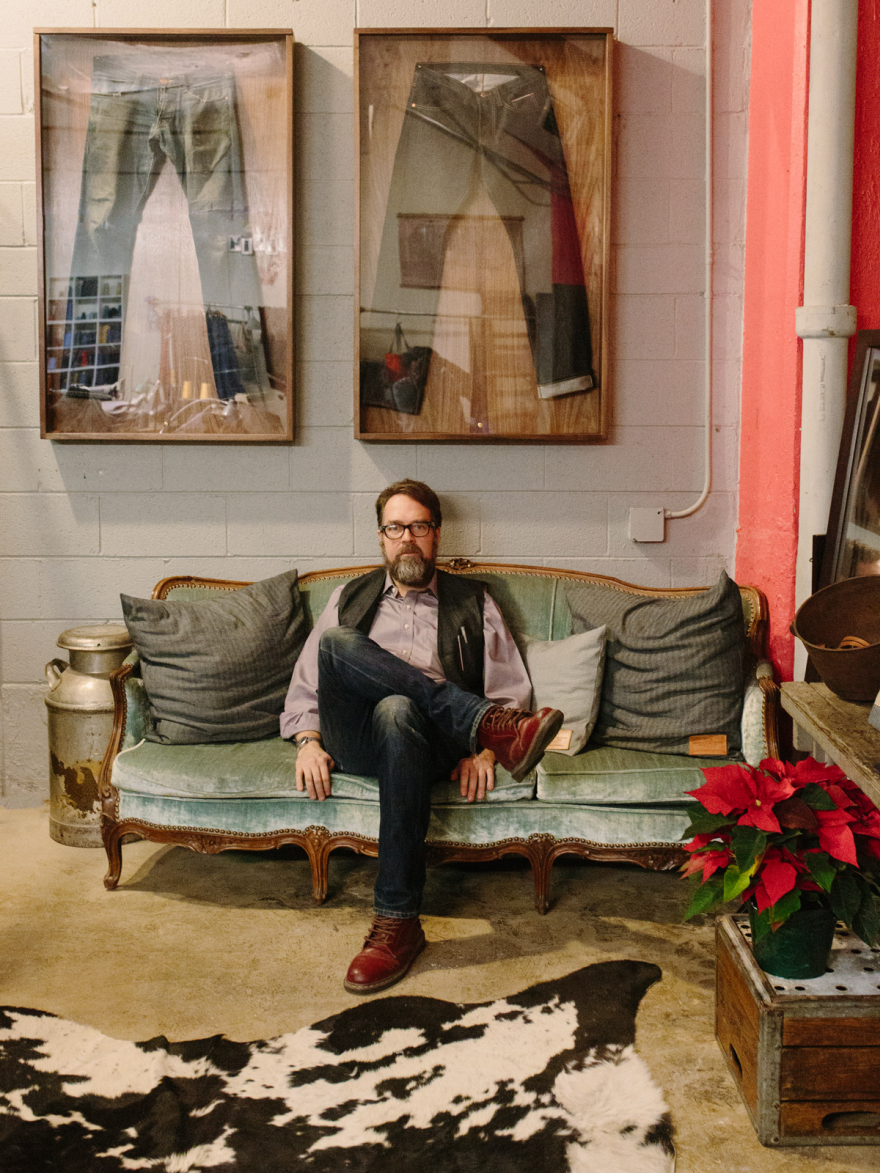 Eric Yelsma is the founder of Detroit Denim Co., which operates out of the Ponyride space. As a youngin', he taught himself how to use a sewing machine. Several decades later, he found himself obsessing over the relationship between the customer and those who make his clothes. This led to his passion-driven quest to make the highest quality American jeans, with an eye on both style and utility. Detroit Denim's denim is sourced from the well-known U.S. mill, Cone Mills in North Carolina. His team of four ensures that 100% of all other materials used are also sourced from within the United States. 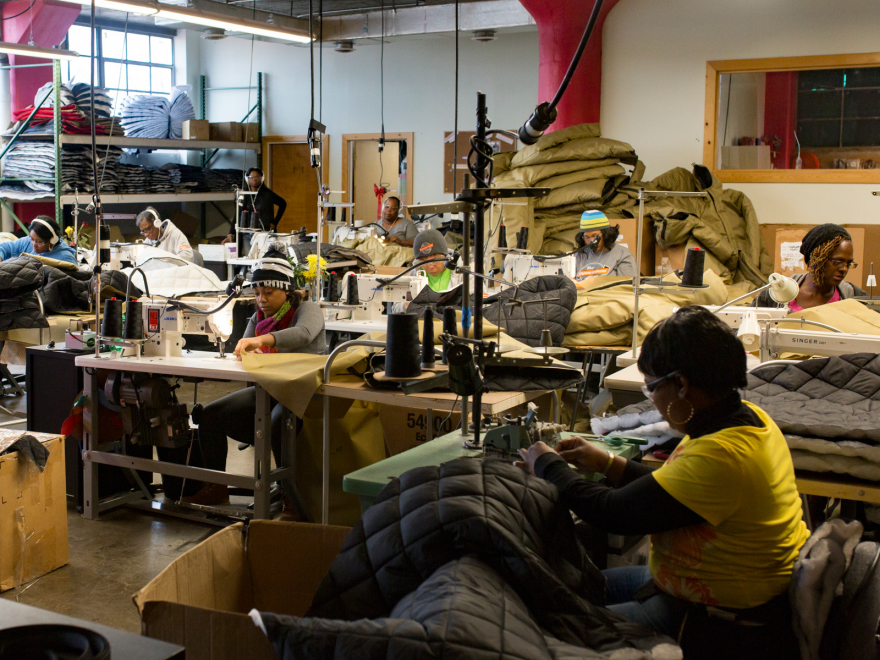 The Empowerment Plan is a nonprofit organization dedicated to serving the homeless community by breaking the cycle of homelessness. They manufacture coats that transform into sleeping bags for those in need and are almost entirely staffed by homeless parents from local shelters. Many move on to become full-time seamstresses. Through this program, manufacturers move into financial stability, receive help in finding secure housing, and gain a sense of pride knowing they are helping others stay safe and warm. Julie Boissonneault-Benac is the production manager of The Empowerment Plan, and explained to me how coats are handed out to homeless people in need, sponsored by donations from local and regional companies looking to help.

Music in Our Heart 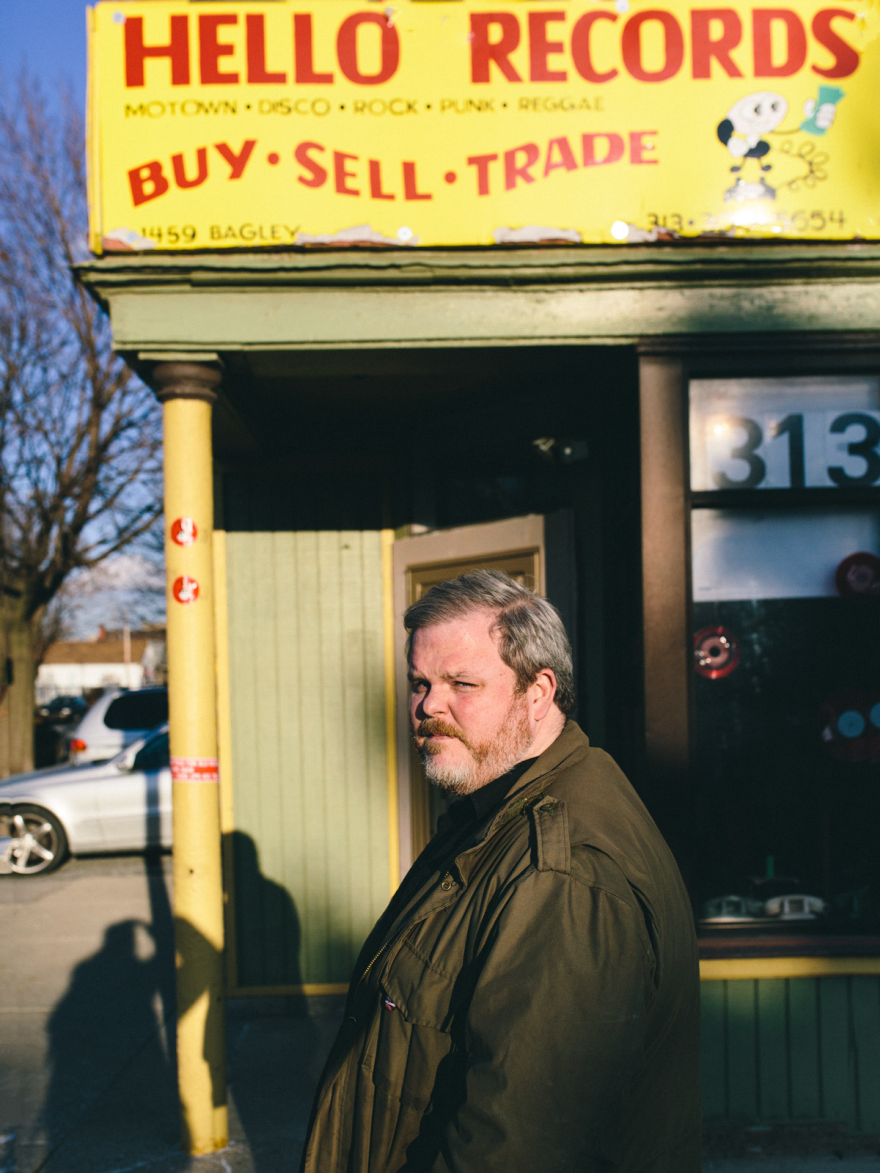 Wade Kergan is the owner of local vinyl store, Hello Records, which he opened in 2009 with his business partner, Ben Hall. The store is small yet eclectic, filled with customers that care enough about quality records to spend hours tracking them down. I thumbed through soul, funk and jazz classics while others found gems in bins filled with dance singles and 45s. More than a store, Hello Records is really a place for the local vinyl and music community to gather, shoot the shit and learn, all while picking up some new tunes carefully curated by Wade. 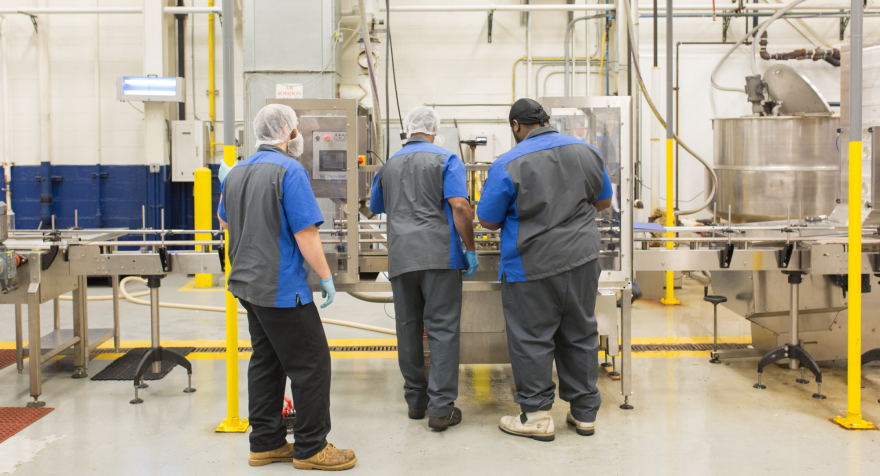 Some 10 years ago, the McClure family started a pickle company based on their great grandma's recipe—after many years of making pickles in their home kitchen, perfecting the process. Every overnight success is ten years in the making, after all. McClure's Pickles is run by brothers Bob (from Brooklyn) and Joe (pictured below, in Detroit). Joe's team handles all manufacturing and maintains relationships with local, ensuring the freshest and best ingredients. The jars are then hand packed in the factory, after which Bob's team handles marketing and sales.

Outside of pickles, Joe also holds a doctoral degree in physiology, and is a fervent classical musician. Bob is an actor and comedy writer with a bunch of big brand commercials and various tv and movie work to his name. Their parents, Jennifer and Mike, also have key roles in the pickle making business, making this a true family company. As I walked around the factory, I noticed that while pickling is serious work that requires focus and safety measure, everybody was having a good time working together—taking pride in making something special as a team.

McClures Pickles are available in various locations near IDSA 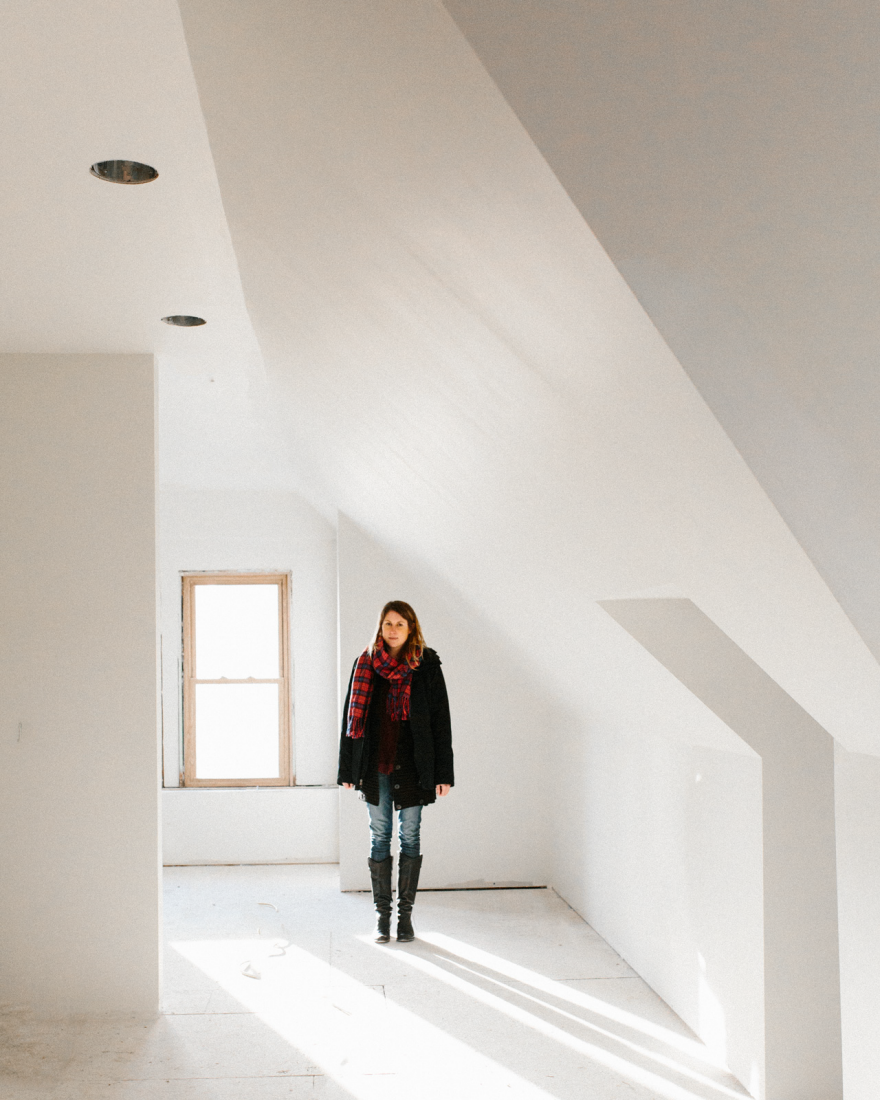 Sarah F. Cox is the co-founder and director of Write A House, a 501c3 nonprofit that combines community building with support for the literary arts. Those in need of vocational training are taught how to build houses. The finished houses are then awarded to an authors that relocate to Detroit.

Leveraging Detroit's large pool of available housing in creative ways is just what the city needs, and blowing life into the stale concept of traditional writer-in-residence programs is a wonderful way to do so. The program is a perfect combination of Sarah's interests and her professional past as a writer and editor in the world of real estate. After six years of living in NYC and working in the magazine world, Sarah felt it was time to find a new place where she could truly build something of substance. In the years since, she's been quietly building an empire, helping others find sustainable ways to pursue their passion, and single handedly bringing fresh new creatives to town. Not bad, Sarah, not bad. 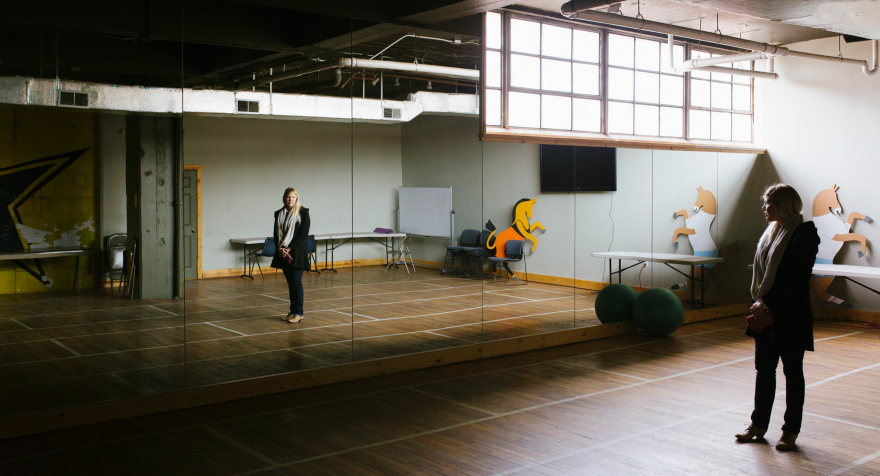 Kaija Wuollet is the principal of the architectural design practice, Laavu Studio. Laavu is dedicated to city-building, and I couldn't think of a better place for them to exist. There is so much potential and so much to work with in Detroit. Living amongst so many underutilized structures, inside of challenging socio-economic conditions, requires a lot of imagination, grit, and optimism. Luckily, Kaija has those in ample amounts, which was clear within the first minutes of our conversation. We looked at building plans and models, enthusiastically explained by Kaija who may very well, by way of her imagination, already live in the Detroit of tomorrow. It'll be wonderful to see her continuing to make an impact.

Find the stories behind twenty additional Detroit creatives and hundreds more across the country at oneofmany.co.

I'm a photographer, writer and director with a focus on portraits, travel, and narrative storytelling. My purpose is to find, capture, and share stories that positively impact our world. I explore the movement of creatives leaving NYC and SF to pursue work and life elsewhere.