If you've been following the elections in any way this year, you might have found yourself ruminating on the apocalypse and the seemingly infinite number of routes that might take us as a society toward our inevitable demise. I know I sure have.

From the wrong man getting his tiny, grubby fingers on the nuclear button to a giant wall falling down and crushing us all, there is no shortage of scenarios for how this could all play out. So many, in fact, that we might be forgetting another world threat: air pollution. 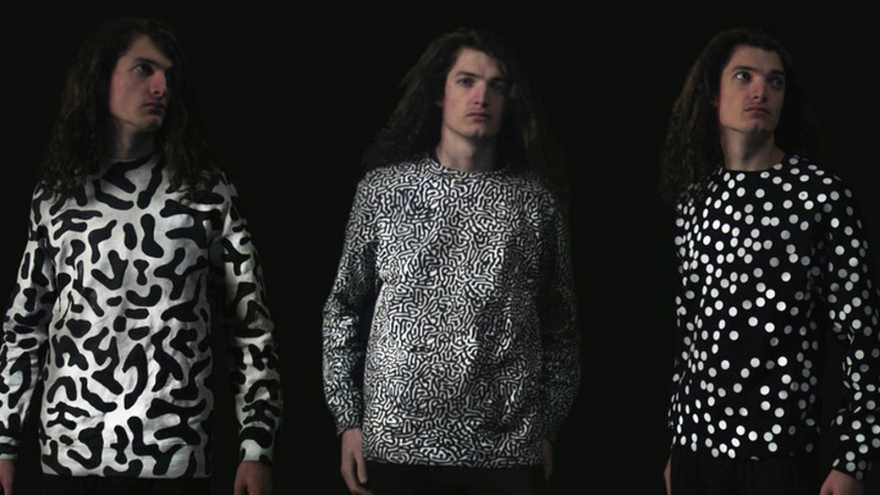 Aerochomics wants to bring that threat to the forefront, raising awareness for how our air quality is rapidly deteriorating at a global scale. Born out of a speculative project, founder Nikolas Bentel began exploring the idea for Aerochromics while still a dual-degree student at Rhode Island School of Design and Brown University in 2015. The first iteration is a line of reactive clothing that transforms its pattern when exposed to increased levels of harmful particles in the air.

"I started out by creating a speculative future about pollution which was illustrated by Marianne Khalil," Bentel says. "The Aerochromics clothing seemed like a good product that had applications in this future world I created, but also had relevance in our current time." Additional inspiration was drawn from Bentel's previous job working for artist Adam Harvey, who produces and sells similar speculative clothing, like his Stealth Wear Project. 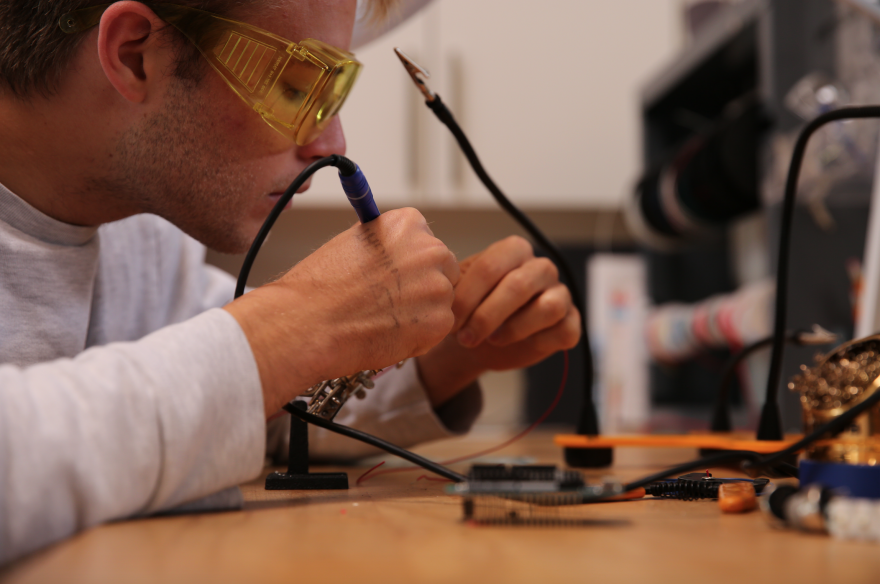 As part of speculating on the future, Bentel wanted to imagine potential solutions that used existing, often under-leveraged technologies. "The science for all of these pieces of clothing exists and is easy to find," Bentel says. "Everything can be found in some form at your local hardware store, but the science has never been applied to consumer-grade clothing."

Bentel decided to focus on three of the most pervasive pollutants: carbon monoxide, particle pollution and radioactivity. For each, Bentel started by looking at how they're traditionally detected, and then figured out how that technology could be integrated into clothing.

For the Reactive Carbon Monoxide Shirt, for example, when the shirt comes into contact with a concentrated area of carbon monoxide, the carbon monoxide is oxidized by chemical salts in the clothing — removing oxygen atoms from the ink in the process — which triggers the change of color. Once the wearer moves out of the contaminated area, the shirt is able to take oxygen back from the air, reversing the catalyst back to its original chemical form and also changing the coloration back to normal. "Essentially, the catalyst regenerates in the air," Bentel says. "This process is very similar to an everyday carbon monoxide spot detector which are patches that change color when carbon monoxide is present and change back when air around the spot has stabilized."

For production, patterns are printed on 100% cotton black fabric using transparent speedball screen printing ink, mixed with powdered reactive dye. After the ink has cured, the fabric is sewn together into individual shirts. "Our biggest problem was to get the materials to stick to the flexible shirts without coming off from abrasion, so I tried a few different methods and landed on screen printing on the fabric," Bentel says. Guaranteeing color change in the correct amount of pollutants proved to be another challenge, one that involved several tests to get the fabric to change from black to white at 60 AQI (Air Quality Index). The shirts' patterns are completely revealed at 160 AQI.

The Reactive Particle Pollution Shirt, on the other hand, is activated through the use of two very small sensors embedded in the front and back of the shirt. These sensors trip when the shirt enters an area of particle pollution (solid particles and liquid droplets found in the air such as dust, dirt, soot or smoke), alerting a small microcontroller in the collar of the shirt. This controller then pushes a signal to circular heat pads all connected by hand (a time consuming process, noted Bentel) throughout the garment which warm patches of thermochromic dye, changing the pattern's color. An additional layer of insulation around each pad shields the dots from being affected by outside temperatures, while simultaneously retaining the heat from the trigger.

Finally, the Reactive Radioactivity Shirt (still under development) uses a nontoxic, chemical indicator dye that changes color depending upon exposure to gamma or electron beam radiation. First coated with a UV blocking agent, the fabric is protected from UV exposure and requires a minimum of 15 kGy irradiation for color change to occur, similar to the radiation of the indicator dots. "At greater dosage levels, the radiation indicators exhibit an increased color," Bentel says. "Once you have been exposed to a sizable amount of radiation the shirt will not change back." Noted.

Bentel sees this line of clothing as just the first step toward developing an entire ecosystem of interconnected objects that will help us better understand, navigate and protect our world. At a $500 pricetag per shirt, however, it's an ecosystem that might be a bit out of reach for most, particularly those who live in environments where air quality is low. Bentel acknowledges the stiff pricetag, however, and chalks it up to the limited run to start. "If there was a large demand, then I would figure out how to make them more efficiently," he says.

"I see Aerochromics as more of a statement, which I think it has been successful in doing," Bentel says. "I also see Aerochromics as a prototype for a cheaper, more useable pollution monitoring system. I am not as interested in selling a lot of the clothing; The online shop is secondary to the concept. Launching Aerochromics has been a great test into seeing if there was a viable market for this type of clothing and to see how the public would react to the clothing."