Towards a Contemporary Design of Assisted Suicide

For her Masters Thesis at the SVA MFA Products of Design program in New York City, Natsuki Hayashi undertook a year-long pursuit to investigate how design could respond and contribute to the increasing legalization of assisted suicide in the United States. In the conversation below, she talks to Allan Chochinov, chair of the program and a thesis advisor on the project. You can view the entire thesis project and read the thesis book at http://productsofdesign.sva.edu/blog/masters-thesis-sincerely

[Editor's note: This subject is near and dear to our hearts, as IDEO's Dana Cho will be discussing similar end-of-life issues at this year's Core77 Design Conference coming up quick on September 29th. Reserve seats here.]

Allan Chochinov: Natsuki, when you first proposed working in the area of assisted suicide back a year ago, it was clear that you were moving into a delicate area...to say the least. (I think the term someone used in class was that you would be "playing with fire.") Can you tell us the genesis of your interest in bringing "design" to the world of end-of-life issues?

Natsuki Hayashi: Last summer, I was listening to a podcast, Criminal, and one of the episodes was about "Final Exit." In the episode, the host interviews a woman who is (or was) an "exit guide" from an organization called Final Exit Network. She travels around the country helping people who are terminally ill and want to end their suffering. Essentially, her job is to provide information and be a mental support for those who are going to commit medically justified suicide. 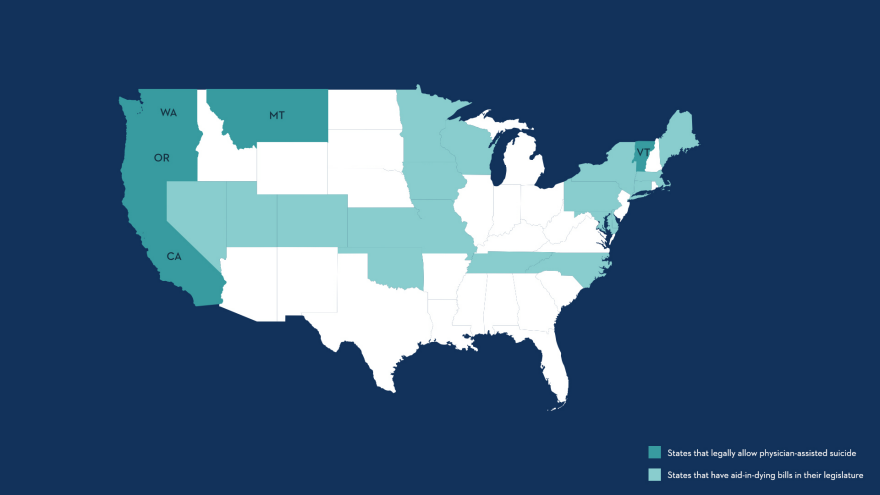 Then I remembered years back, a good friend of my mother died in a nursing home alone. She had Alzheimer's and age-related health issues. Before she passed away, my mother took me to the nursing home for a visit. On our way home, my mother said to me, "If I ever become like that, just kill me." It was a difficult and strange conversation to have with my mother. I didn't want to hear her talking about dying, but she wanted me to know that she doesn't want to have a lingering life, depending on other people and possibly machines.

And I realized that death is inevitable, but how we die is within our control, and I have a strong point of view on end-of-life issues. I believe that we all should have options and control over how we die—even if it means choosing to die. So, I wanted to dedicate a year of my graduate study to people like mother, who want to have control and dignity at the end of their lives. As a designer, I felt the urge to understand the issue and to possibly do something about it.

I remember clearly your resolve around investigating a place for design in end-of-life issues, and your maturity in addressing the subject overall. What were some of the initial discoveries that you made, and did any of them change your thinking around the subject?

I knew there were two sides to the debate, so I listened to and learned from both sides. For a while, I was actually scared to express my point of view through my work because I didn't want to offend anyone, and I wanted to respect people who are not on the same side as me but helped me throughout my research. But when Dr. Timothy Quill at the University of Rochester said, "Whether or not this practice is legalized, seriously ill patients are asking us to talk about it; they're asking us to consider it seriously," I realized my work is for people who are seeking control and dignity in death; that perhaps the work isn't supposed to be pleasing for everyone. That was a turning for me in the process. 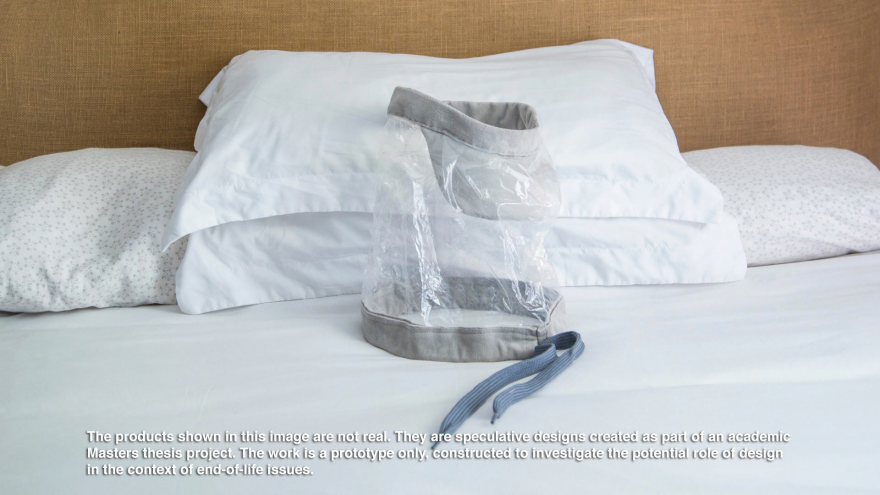 I think for me, the first prototypes you created are what made this work very real and very serious. I remember feeling very conflicted as a design teacher around supporting "good design", encouraging your daring around transgressive subjects, and, well, coming to grips with some of the imagery you created. Did you have similar challenges?

Well, after I prototyped some product concepts, I discovered that creating imagery around this subject was really difficult. Putting my speculative products in a real-life context, and taking photos of them, made me realize the potential consequences of my work and the responsibilities that are associated with these ideas. 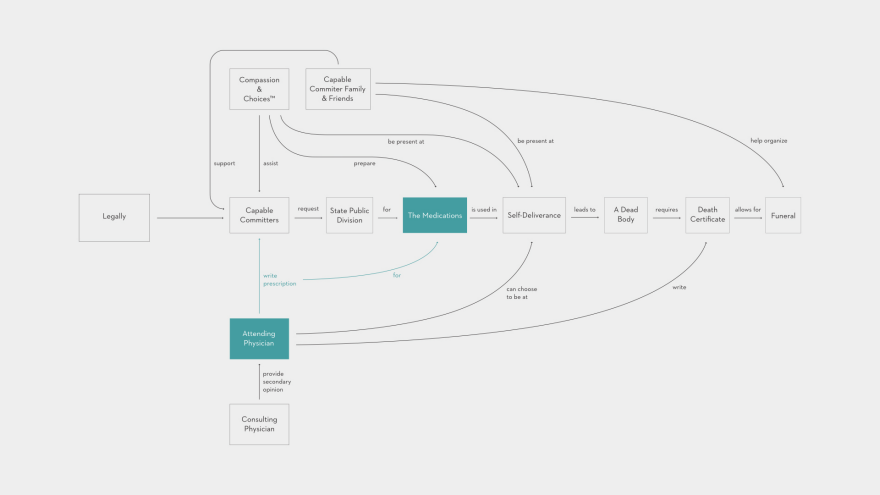 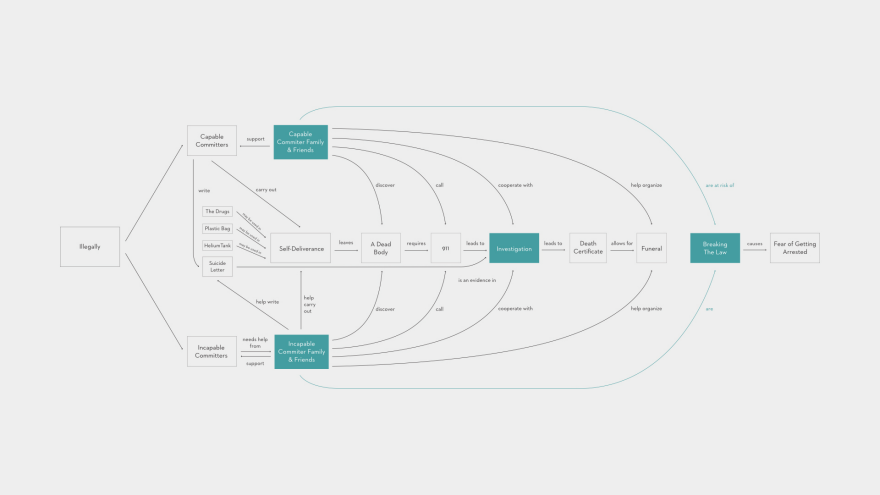 Earlier on, I tried taking photos using myself or my classmate as models, but those photos just looked wrong. They had different messages and aesthetics, because the people in them and the environments were not appropriate for what I was trying to convey. In the end, I hired an older actor and actress to model for me so that I could create images that were as close to real-life scenarios as possible. I think the imagery of peaceful "suicide" is almost a new genre and very disturbing for many people. Our eyes (and brains) are not used to seeing things like that. 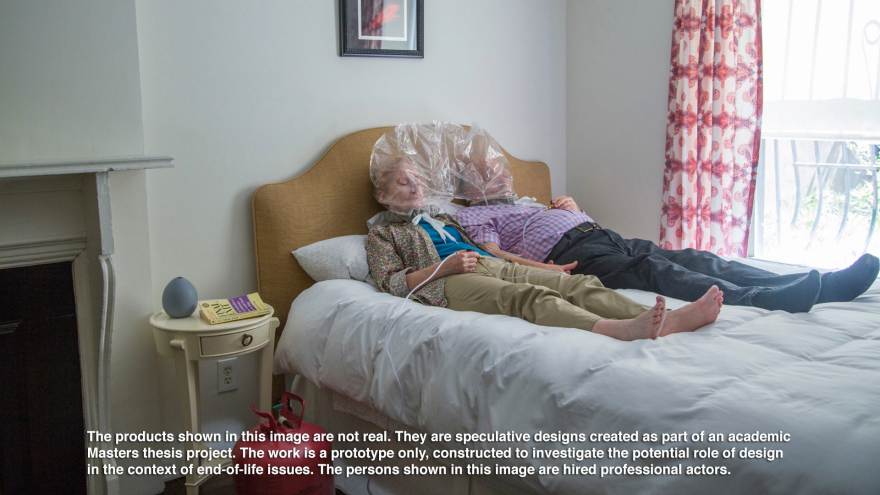 I couldn't agree more. After class I would go home and wonder, "Are these images really too much? Are they in some sense 'offensive' or disrespectful?" Or is it merely the case that my mind had never seen anything like them before, and that there was a new kind of cognitive processing going on. I guess I'd like to ask what the professional actors in the scene thought?

Well, they knew in broad strokes what they were getting into. But they said it was still a very strange experience. Since the objective was for them to "act like they were committing suicide in a very peaceful manner, and with a sense of relief," they reported that the experience made them think about how they would want their the last moment to look like.

And they had some product design feedback as well, right?

Yes. They both said that they got warm and felt a little claustrophobic inside of the bag, which of course is understandable. But then they brought up an interesting idea that I'd never thought of. They said, "With this product, the last thing you see from this world is a ceiling through a plastic bag." That comment made me realize that I could—and should—consider the view from the user's point of view, which is hard since that frame of mind is so difficult to truly empathize with—someone who has chosen to end their own life. Nevertheless, perhaps design can provide more than just a view of a blank ceiling filtered through a sheet of clear plastic.

Did you have any ideas with what might be? I guess clichéd sunsets and mountaintops is probably not the way to go?

I think it really depends, of course, on an individual's preferences. "Dying" is such a personal thing, and should they have the option of "choosing," everyone has a different picture of what they'd want their last moments to look like. From my research and interviews, the most common desire was to be surrounded by the people you love—family and friends—so the last thing people would want to see are the faces of their loved ones.

The political impact? I obviously hope that more people will support bills to legalize assisted suicide and change the policy that punishes people who help their loved ones end their suffering.

Throughout your year's work, I know you've heard many people worry or express concern about the objects you created. What are your thoughts now that the work is complete?

There are limits, of course, to anticipating any of the effects that any design work can have. My intention with the work was to provide some compass points for people interested in what is involved in choosing a peaceful suicide, and creating some speculative products and services about how those choices might be responded to from a design perspective. I wasn't interested in prescribing techniques or "how to's"—there are plenty of those available online and elsewhere. Rather, it was important to me that design get ahead of this social movement, and using a graduate school thesis as an opportunity was an ideal place to ask "what if?"

If my work means something to people who are suffering at the end of life, or to my mother—who wishes to have options for herself at the end of her life—then I think it has value.

How would you sum up the potential socio-political effects of the work?

Well, I hope that that the social impact may be that this thesis can be a step forward in removing the negative images associated with assisted suicide, and shifting people's perceptions about end-of-life care...and choices. The political impact? I obviously hope that more people will support bills to legalize assisted suicide and change the policy that punishes people who help their loved ones end their suffering.

This project has connected me to so many people who are so kind and supportive. They shared their personal stories with me, and that changed the way I look at the world of death and dying. 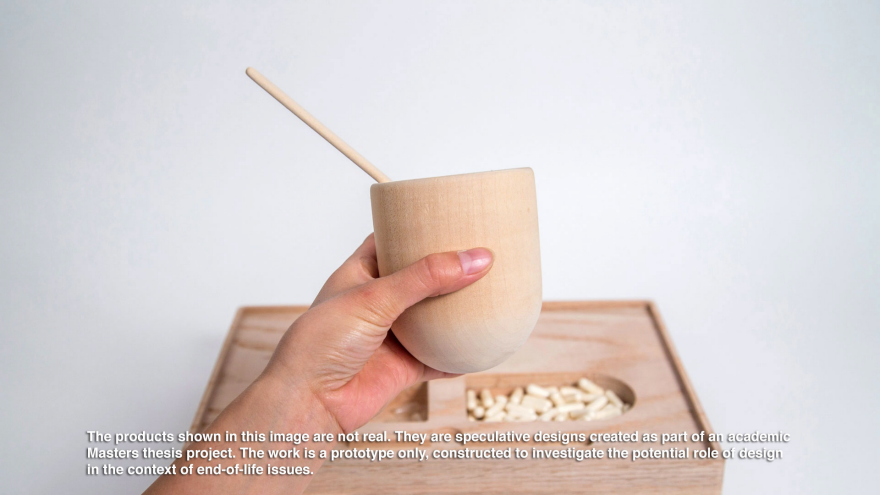 And the potential economic impact of the projects?

The economic impact is more complicated. We spend incredible amounts of money keeping a person who is dying—and wants to die—alive, every day. And most medicare expenditures are used up during the last two months of patients' lives—often with no significant impact. So, if assisted suicide were legal, people who wish to die in peace could have planned their ideal death with their loved ones, and avoided the dreadful end-of-life healthcare costs. I'm not arguing that it would be "cheaper," or that people should choose assisted suicide for financial reasons, but this is certainly a topic that we as a society need to talk about.

And finally, what about the impacts on you. How has this project changed you as a designer, as a learner, and ultimately as a practitioner moving forward in your career and in creating a future body of work?

I used to shy away from expressing my point of view; I often tried to find a middle ground so as not to offend anyone. But this project has pushed me to step out of my comfort zone and to not be afraid of having an opinion and expressing it through my work. I also learned a lot by doing. Sometimes we need to get out of our head and into our hands, so that we can discover things and then iterate from there. I see the value in looking at controversial and difficult issues through design lenses, and I hope to be able to get involved in projects like these more in the future.

On a personal level, this project has connected me to so many people who are so kind and supportive. They shared their personal stories with me, and that changed the way I look at the world of death and dying. I feel grateful for everyone who has contributed to the project for all sorts of reason, but certainly also because they helped me grow as a designer.

See the entire thesis project, Sincerely, Toward a Design of Assisted Suicide, here. See other thesis projects at MFA Products of Design. Learn more about Natsuki Hayashi at natsukihayashi.com.