Independent designers, take note: They handle the marketing, publicity and sponsorships, allowing you to focus on selling and making contacts

American Field is an outfit that seeks to promote "the best of American-made brands" by holding pop-up shops around the country featuring dozens of vendors. They rotate through Boston, San Francisco, Washington, D.C., Atlanta, Nashville and Brooklyn, that last location being described as "the widest selection of #MadeinUSA products ever assembled under one roof" (we have no way to confirm if that's hyperbole). Creators of clothing, footwear, accessories, recreational products, skincare/grooming products, home items and food are all welcome. Here's some footage of an earlier Brooklyn showing that gives you a sense of the vibe:

2014 American Field Brooklyn Pop Up Market from Ball and Buck on Vimeo.

The idea is that American Field takes care of the marketing and promotion of the event, documents everything on social media and draws in press as well as shoppers, allowing the vendors to focus on stocking, selling and making contacts on the floor. After each event the organization produces a numerical re-cap to let vendors (and would-be future vendors) know how they did. Here's an example from last year's Brooklyn showing: 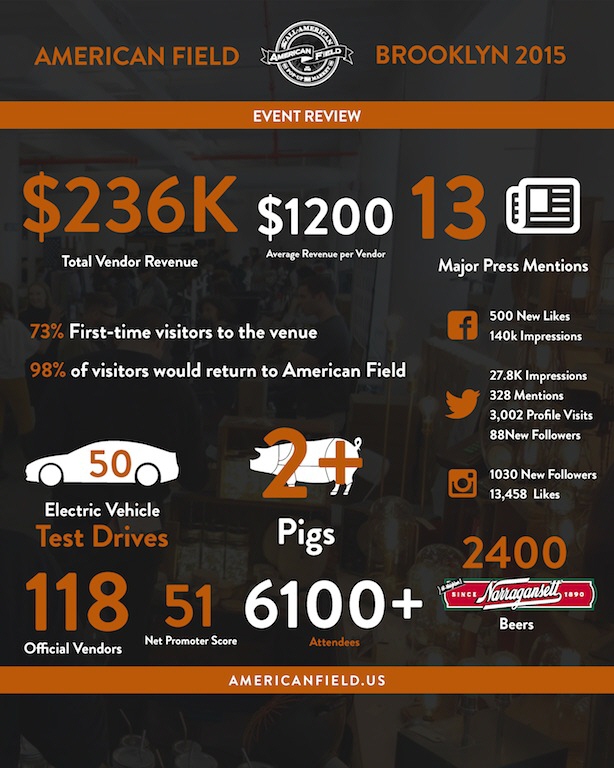 My first thought was that they were subtracting the price of the booth rentals, but that doesn't work either: Looking at the 2016 Vendor Contract, the smallest booth you can rent in Brooklyn is a 10' x 10' that rings in at $1,250.

To clear this up, I put in a phone call to American Field's office number listed on their Facebook page, but only got a prerecorded message announcing I'd reached a company with a different name altogether. So I'm not sure what's going on there.

In any case, if you're an independent designer for whom an event like this would be useful, here are the locations and dates for upcoming American Field events:

Lastly, if you were one of the vendors at a previous American Field event, and can explain the accounting, please do reach out and let us know how we can contact you. I checked out the re-caps from other cities and the math is off on those, too; I'm curious as to what we're missing.