How to Combat Your Workplace's Distracting Open Office Plan

How is it that our 'freeing' open offices have made people miss cubicles?

You know what they say, the grass is always greener on the other side. These days in the workplace, there is one example of something many never thought they would miss, until it was gone—cubicles. Yes, cubicles, those sad monotonous structures symbolic of our workplace oppression. Your own personal cave where you could privately wallow in your case of 'the Mondays'. 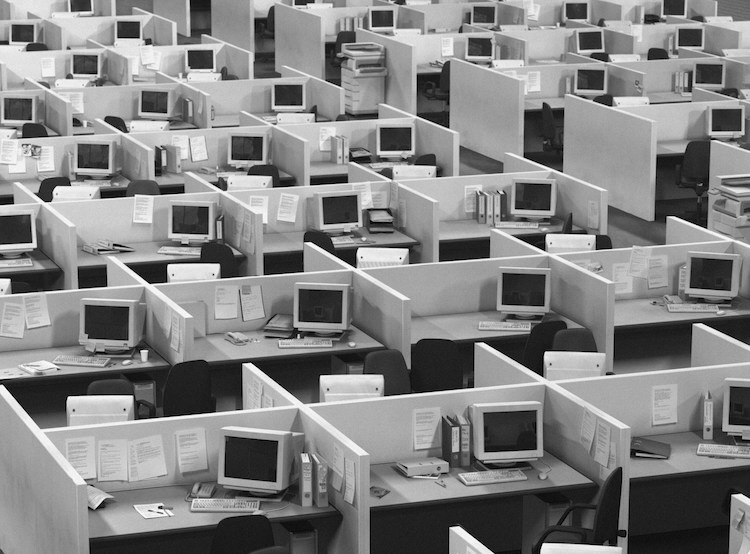 Well this is bleak.

The past few years have proclaimed the dawn of the open-plan office revolution, but statistics are beginning to point to the idea that workers actually seem to be missing the dismal cubicle culture due to the collective feeling that they lack privacy within their office space. A fascinating survey conducted by Gensler with over 1,200 UK office workers in 11 different industries shows that effectiveness ratings in the workplace decrease the more people you share an office with and the less privacy you have at work.

"I work at a medium sized consultancy. It is fast paced, good range of ID and UX, and I love everything about it. Except the open office layout. There is also a lot of constant noise as you might expect, and anything that requires a lot of focus (like building a complicated tech pack or some involved UI in Illustrator) is slowed down a LOT. The zero privacy also makes you feel like you are in a fish tank. Sadly enough, I do prefer the drab cubicle that I had at a previous job to this, although this job is better in every other way.

Sometimes I try to take my laptop into a meeting room, but I don't want to work the majority of my time there, as that wouldn't be seen as being a "team player." Wearing headphones 90% of the day would be bad for the same reason too. Besides these meeting rooms, we only have solo offices for our founders, so I don't think it would be as simple as finding an empty room to make my own.

I've looked up dozens of articles about how the open office was supposed to promote creativity and collaboration, but has failed at that and caused resentment ... and I can attest (as I am sure many of you have also!). It seems like the ideal space would have open areas for people to work together, but individual areas that you can focus in[...]thought I would join and ask if anyone else has had this problem, and how they approached it."

The data in Gensler's work survey shows that "open plan environments can be just as effective, if not more effective, as more enclosed ones," so what are the factors that can result in this more highly effective environment, and how can offices use design in order to optimize these open office plans? How can individual workers empower themselves to become more productive and get the most out of their workspace?

Here are, according to several surveys, a number of issues to look at when trying to improve the open office environment.

Director of Steelcase's WorkSpace Futures research program Donna Flynn says that "a lot of businesses are now struggling with the balance of private and open spaces. There's mounting evidence that the lack of privacy is causing people to feel overexposed in today's workplaces and is threatening people's engagement and their cognitive, emotional and even physical wellbeing." There is certainly merit to an open space as research has shown, but also giving an employee the feeling that there's somewhere to escape to if they need to focus. 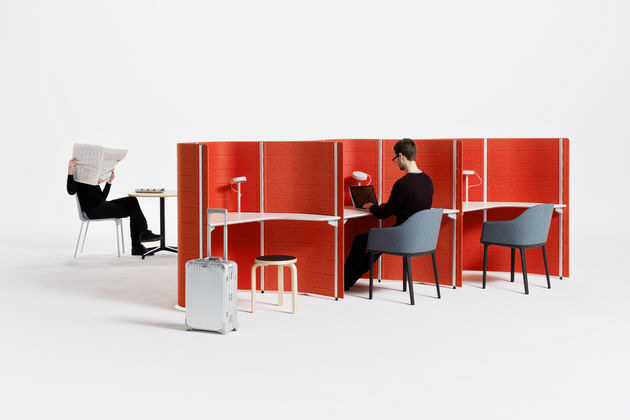 Modular private spaces seem to be the answer to this issue in the open-plan office, shown in examples like the Bouroullec's Workbay system. 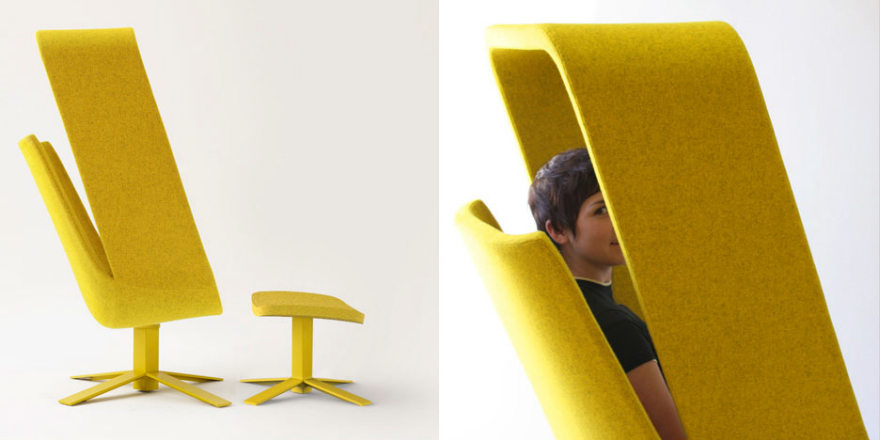 There are also solutions in existence that can be found in simple furniture pieces that create a perceived sense of privacy, like the Windowseat Lounge by designers Mike&Maaike for Haworth.

According to a recent Oxford Economics survey on the open workplace, 64% of those surveyed said blocking out noise and distractions increased their overall productivity and focus. In an open office plan, visuals and noise can equally count for these distractions. So how can designers use their skills to improve issues revolving around noise cancellation or a generally more peaceful soundscape? 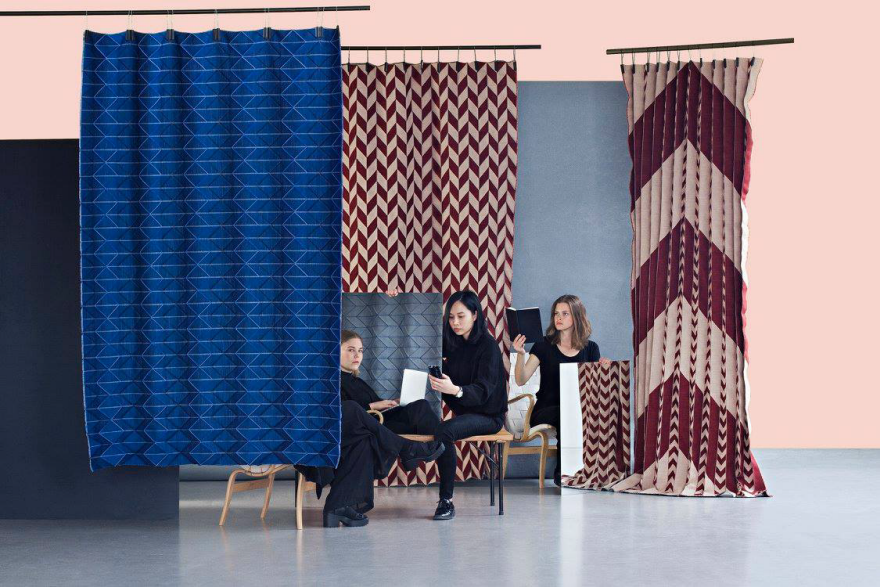 FOLD by Siri Skillgate via Lund School of Industrial Design (2016)

Sometimes these revisions can be done without object based solutions, but instead designed systems, such as a 'no talking' zone. In other instances, easy material solutions can make for highly effective results. One example from Lund University's graduate exhibition last spring at Milan Design Week called FOLD demonstrated a simple solution to a complex problem with a series of beautiful fabric panels that helped to absorb surrounding sounds while also helping workers avoid visual distractions.

Finally, another larger issue in office spaces is the inability to adapt to your task and level of focus needed to accomplish that task. As shown in the Gensler survey, over 70% of respondents said they had no choice in when and where they could work each day. As reflected in the survey, the more options an employees has in where they can work, the more likely they are to succeed and innovate within the organization.

One solution to combat this problem in an office space is to do away with assigned seating and create zones, allowing people to work how they want when they want. 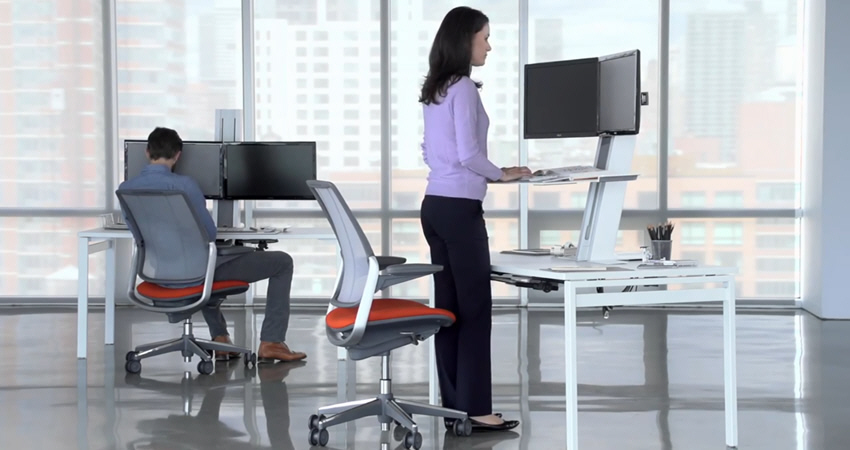 Another interesting find via Gensler was that amongst those surveyed, staff with higher innovation scores used sit/stand desks three times more than those with lower scores—could standing desks be the solution to keep employees engaged and on their toes?

How do you feel about open office plans? What would be your design solution to one or many of these open office plan problems? Voice your opinion in the comment feed below or the original discussion board post.

(You can also check out some great freelance furniture solutions from our recent 1-Hour Design Challenge for inspiration!)

How to Combat Your Workplace's Distracting Open Office Plan