Micro, Meso, Macro: Exploring the Scale and Presence of Design through Physical Objects and Social Systems

It may slip our minds from time to time, but the overall objective of design should be to create a better world. Driven by the desire to approach problem solving holistically, eight years ago engineers from Brown University and designers from Rhode Island School of Design formed a partnership and founded the student-run conference, Better World by Design. Hosted across the two adjacent college campuses, the conference is not purely a collegiate affair. Designers, creators and innovators of all sorts will gather in Providence from September 23-25 to learn from professionals just how they too can create a better world through design. 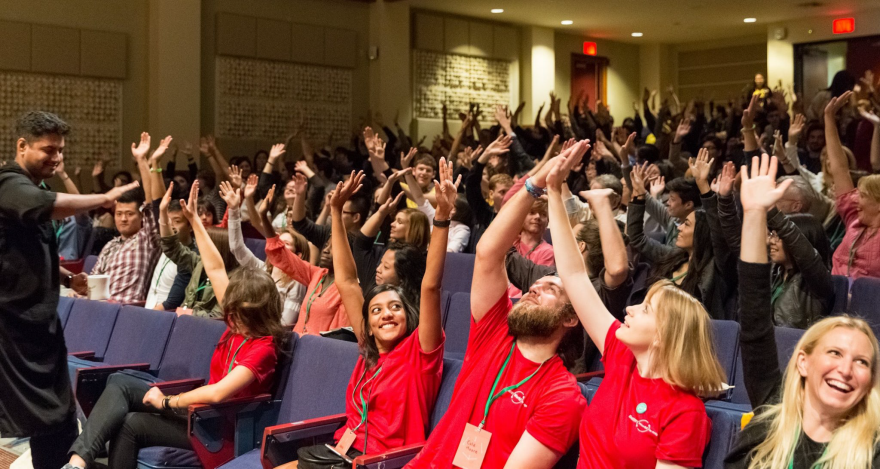 This year the conference will operate around the theme of Interplay, which emerged from the interdisciplinary backgrounds of the 2016 BWxD team. Major areas of interest initially felt seemingly disparate and included healthcare, food, urban planning, digital media and speculative design. After some research the team realized that each of these fields utilize multidisciplinary thinking, interacting with each other. The common thread between all of these fields? Design. 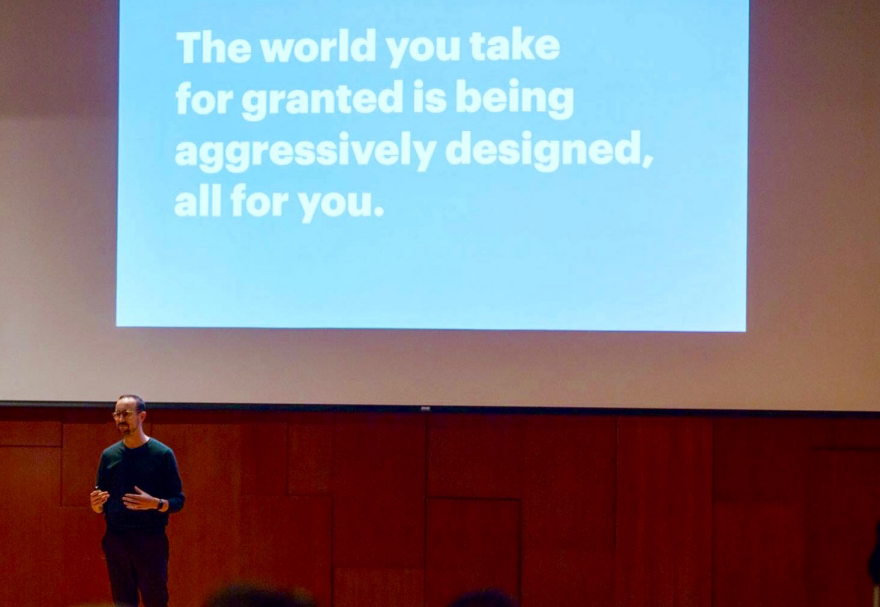 "We found companies and individuals redefining longstanding designs, industries, and methodologies, no matter their area of expertise," says BWxD Content Team member Evan Boyd. Between "food businesses rethinking the relationship between producers and restaurateurs, health companies constructing new kinds of patient interfaces and architects reconceiving public space," the most crucial players in each process are the designers and innovators who understand the necessity of interdisciplinary design, "bringing previously unconnected entities into the same conversation or space." So the theme of Interplay was born—"inter" capturing the notion of creating new connections and "play" enforcing the freethinking and experimental spirit that accompanies successful design.

Over the course of three days themes of Micro, Meso and Macro will be explored. Each day examines the scale at which interplay is occurring, from small interactions between a person and object to massive interactions operating on a global scale. Through thirty-five presentations, workshops and discussions, presenters will tackle ideas of ownership, boundaries, community and the capacity of technology and virtual connections to enact massive cultural shifts.

Here's a look at some of Better World by Design's game changers: 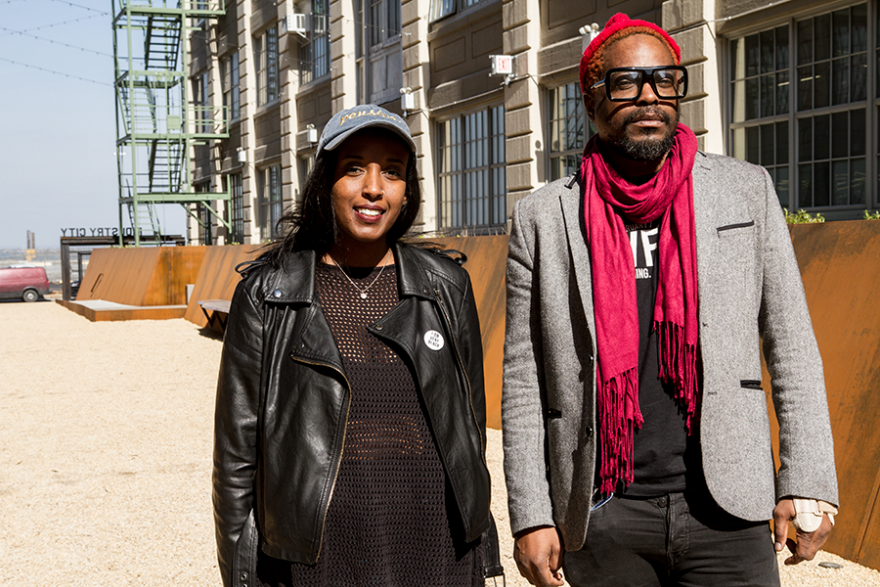 Current Eyebeam Creative Residents and New York based designers and researchers Ayodamola Tanimowo Okunseinde and Salome Asega co-created The Iyapo Repository, an archival library,  museum and workshop space, to examine race and plurality while affirming and representing a future for African diaspora in media as in reality. The two designers met while graduate students at The New School's Parsons School of Design, where Okunseinde is now an Adjunct Faculty Member. Okunseinde works with a wide range of media, from painting and speculative design to physically interactive works and explorations of Afrofuturism, and has participated in acclaimed residency programs, such as Finland's Invitation to Helsinki and IDEO's Fortnight. Celebrating dissensus, multivocality and exploring an interest in how interactivity and installation can be used to tell the stories of border citizenship, Asega works collaboratively through participatory research to build interactive installations and to develop odd wearables. In addition to co-founding The Iyapo Repository, Asega is the co-host of speculative talk show Hyperopia: 20/30 Vision on bel-air radio, the Assistant Director of POWRPLNT, a digital art collaboratory and Co-Creator of Candyfloss, a team of technologists who co-create with musicians. 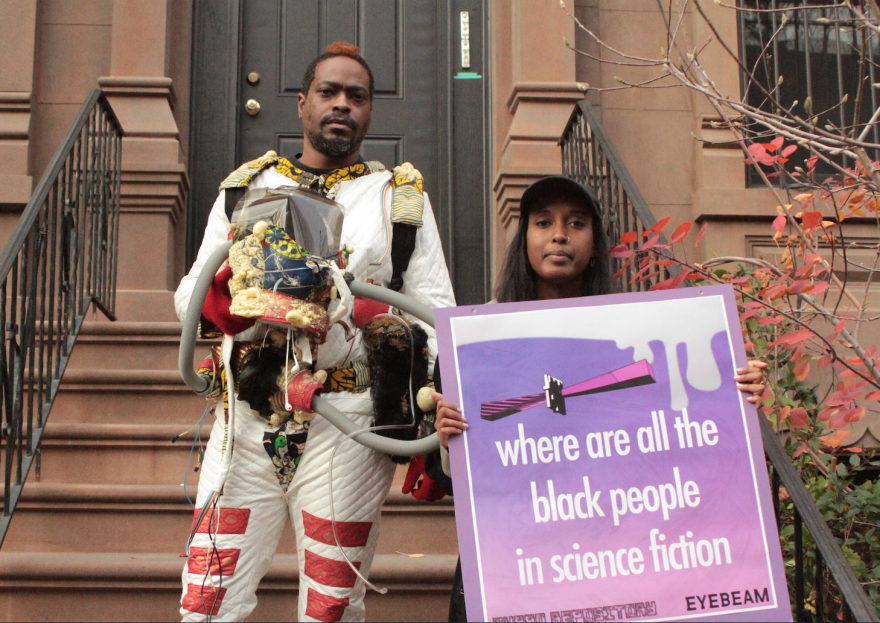 On "Micro" Friday Asega and Okunseinde will discuss how artifacts and museums can preserve and enforce narratives of identity while addressing how designers must ensure individuals have agency over the designs that affect them. 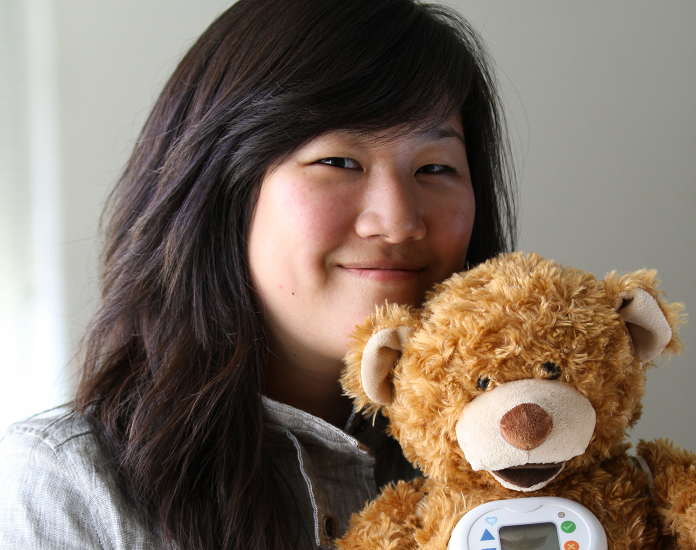 After identifying a need in the medical community Hannah Chung created startup Sproutel, known for Jerry the Bear, which comforts and educates children with Type 1 Diabetes about their disease, and for being awarded $150,000 in federal funds through the Small Business Innovation Business Program. In addition to co-founding Sproutel, Chung is known for co-founding Design for America, a national student incubator-style organization in which students solve social problems through design, was named one of the "Top 15 Women to Watch in Tech" by Inc Magazine in 2012 and won the Perfect Pitch competition at the Fortune's Most Powerful Women 2013 Summit, and was one of 50 makers honored by the White House in 2014. A renowned speaker, Chung has been a presenter at many conferences including Design and Emotion, ACM Creativity & Cognition, RISD Mindshare, IFTF, and Women@TheFrontier by Singularity University and NASA. Primarily, Chung is devoted to simple and intuitive unions of design and technology that enhance education and system design. 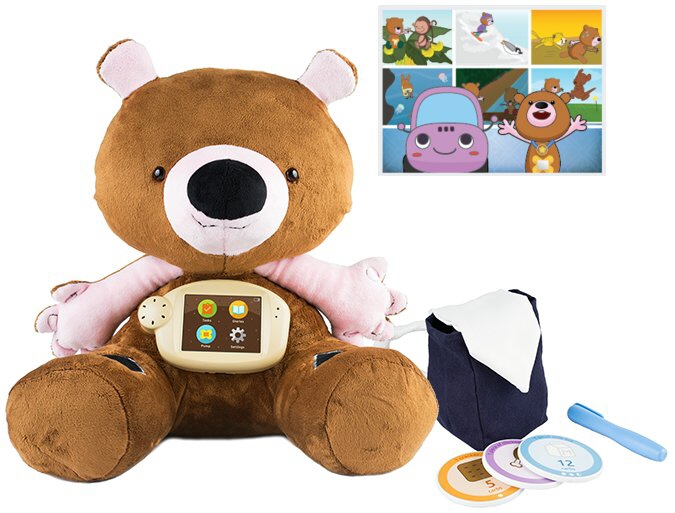 Jerry the Bear is a playful approach to the complex field of juvenile health.

On "Meso" Saturday Chung will present "Sprouting Sproutel: Designing for a Growing Business" in which she will explore the process of creating a sustainable business model for an impact-driven organization. 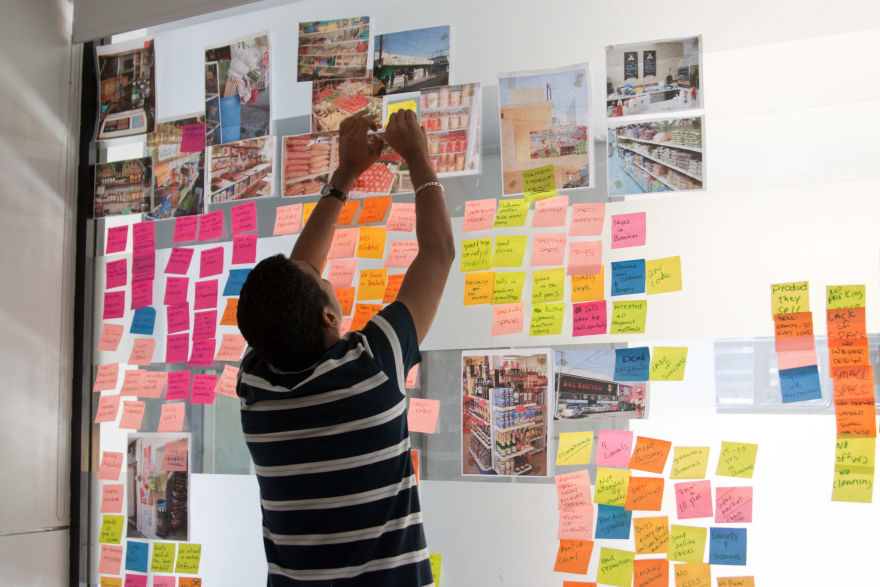 Founder and CEO of YCenter, a global experiential education enterprise, Dhairya Pujara recognizes classroom-only education is not sufficient in creating real-world, sustainable solutions. After obtaining his Master's in Biomedical Engineering in the US, Pujara moved to the African country Mozambique to work in a rural hospital—an experience that revealed systematic problems and led him to found YCenter. Shifting conversations from donation to collaborative solutions through technology and social entrepreneurship, Pujara works with his organization to improve social conditions through healthcare and education system design. 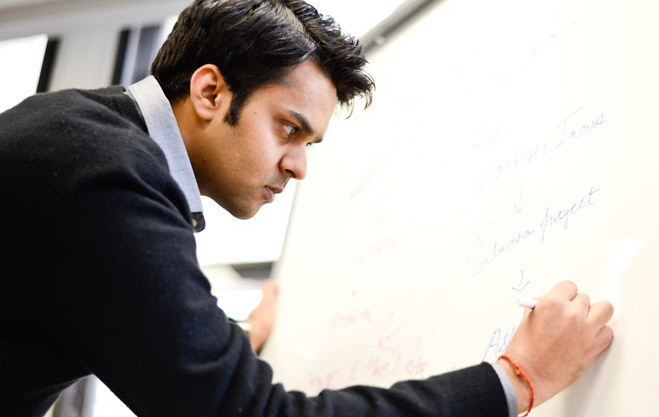 On "Macro" Sunday Pujara will present his organization's projects in Mozambique and Mumbai driven by design-thinking. Following the presentation he will hold a hands-on workshop emphasizing the importance of research, action, prototyping and implementation when creating community solutions.

With such an engaging speaker lineup, this year's event is sure to amaze. Some of the other engaging conversations and workshops to look forward to are "Pneumatic Masonry," a workshop held by design collective Pneuhaus in which participants will collaboratively explore the configuration of predetermined structures using pressure systems that create semi-permanent and rigid structures. 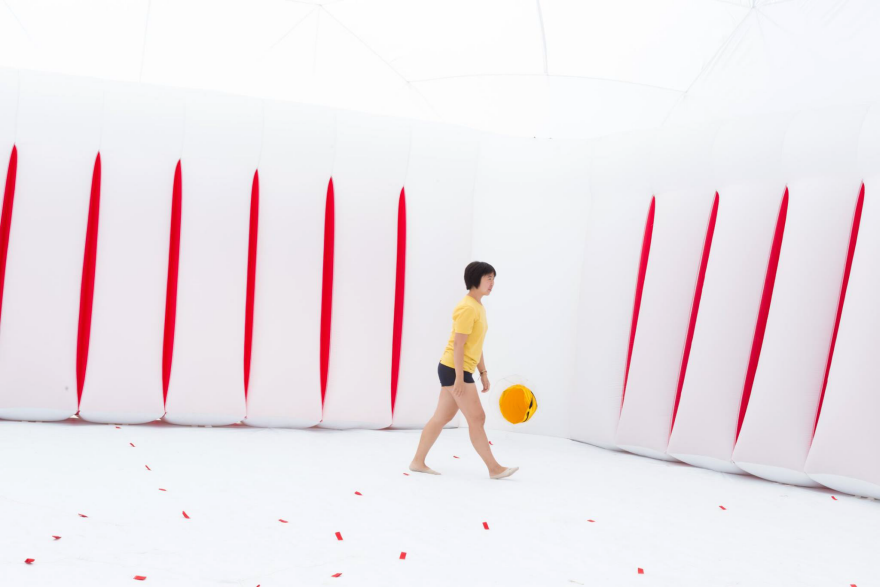 News of the 2016 presidential race is hard to escape. With this year being a unique time in history for American politics, designers must consider our roles and creations within this moment in time. Better World will be holding events addressing this, such as a talk by Dana Chisnell of Center for Civic Design about the Anywhere Ballot, a new way to make voting in elections more accessible by letting voters use their own devices, and a conversation "Why Designers Need to Run for Congress" with Leah Chung of US AID about why designers are uniquely qualified for public office. 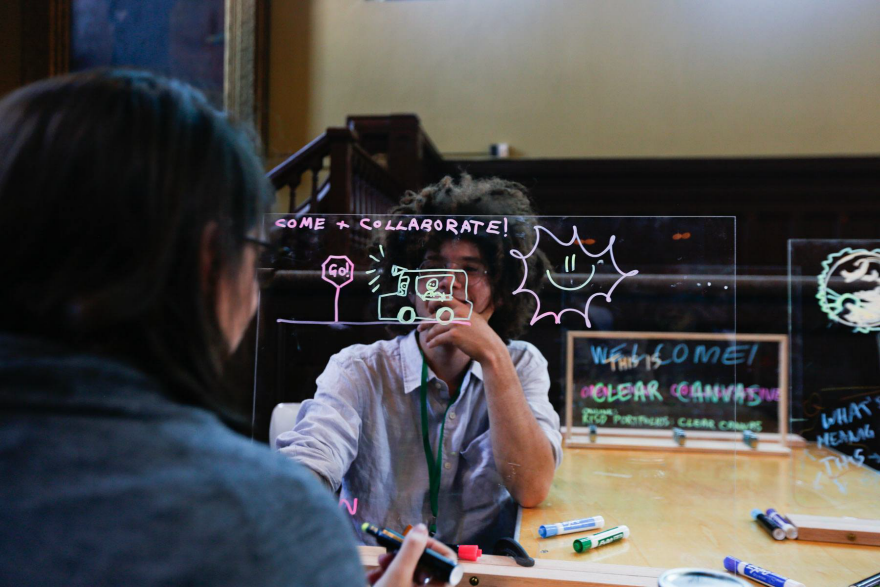 In addition to the diverse workshops and lectures, Better World breaks down the barrier of accessibility between presenters and attendees with a wide variety of networking events, parties and (thankfully) provided snack breaks. Tickets are anticipated to once again sell out, get yours before it's too late.

Micro, Meso, Macro: Exploring the Scale and Presence of Design through Physical Objects and Social Systems