Nothing is worse than accurately cutting out all of your parts for a project, then screwing up during the assembly process. This is easy to do with a project made from wood, where a lot of the pieces can look the same. So it's good to have a system to quickly, easily mark the pieces, such that if you pick one up hours, days, or months later, it will be clear where it goes.

The system I use (which has been around for ages) is the triangle. Here it's being used to show the sequence of glue up on a series of boards. I think the method is better than using a bunch of lines because a triangle is clearly not a stray pencil mark. Even with the pieces apart, it's pretty easy to figure out where they go. 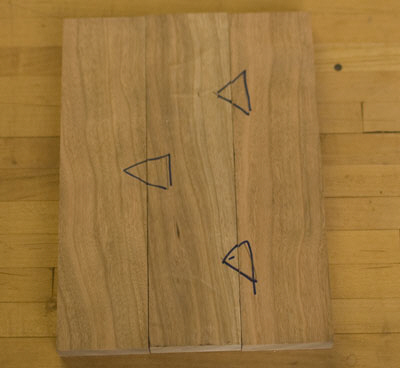 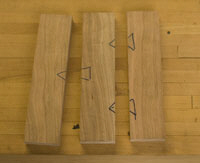 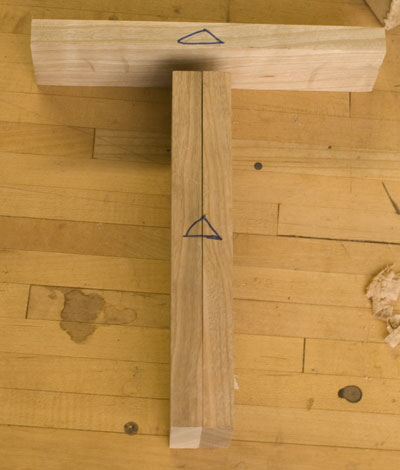 Clearly the two vertical pieces are left and right, and the top piece is clearly the top. If the top piece only had part of a triangle, one would assume that another piece was missing on the bottom. 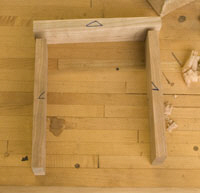 Front and back to a drawer - when otherwise everything matches. The notation also gives a clear indication of inside and outside which is very important. And spread apart, it also makes sense.

You can put the marks on the front or the back or a project - it doesn't matter as long as you are consistent. What is important is that you are preserving the orientation of one board with respect to the next.

The last picture shows that a method for keeping track of your reference surfaces on a specific board is using triangles. The mark that looks like an "X" is actually two "V"s put on one at a time after I first plane the face, then the edge, of a board. In any case, if you find yourself getting confused if a part of a project belongs on the left or right, or facing in or out, try changing your system of notation. This system of triangles might be the answer. 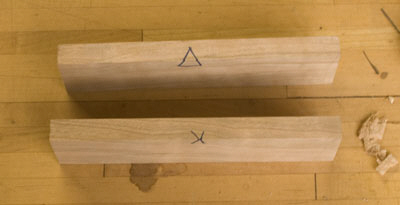 Note: the wood is marked in marker just to make it easy to photograph. On real projects I use pencil like everyone else.