How to Use Video to License Your Ideas for New Products

Lights, camera, action! It's time for you to become a director. Don't sweat it — it's not that hard.

If your sell sheet is worth a thousand words, your video sell sheet is priceless. Like I wrote about at length here, I recommend using sell sheets to pitch potential licensees on your ideas for new products. Sell sheets are like magazine ads: Concise and compelling. The benefit of your idea should be immediately apparent. But sell sheets don't always work. At the end of the day, they're static, and may not leave an emotional impact. If the sell sheet you create isn't doing its job — meaning you haven't been able to motivate potential licensees to get back to you about your idea — you may need to create a video to supplement it.

Video can truly make all the difference. As we all know, it increasingly dominates our newsfeeds. And for good reason: It's a powerful medium we can't take our eyes off of. It also satisfies our collective laziness. Watching is about as passive as it gets. Videos are what go viral, after all. In other words, video is a game-changer. And I mean that quite literally. Product designers frequently tell me: I didn't understand why potential licensees weren't getting back to me about my concept, which is great! So I created a video. And they got back to me immediately to ask me for more information. About ninety percent of the concepts I help negotiate licensing agreements for these days employ the use of video.

When Ryan Diez, a former student of mine who is now an inventRight coach, invented a unique dog-washing device, he labored for years trying to bring it to market. He always got great feedback, and even licensed the idea in 2009, but progress ultimately stalled and he kept hearing no. Then, in June of last year, a video of his hoop-shaped product the Woof Washer 360 blew up on Facebook overnight. The video had been uploaded almost accidentally. It wasn't the infomercial that had been airing during the past few weeks, but B-roll, shorter, and soundless. The next morning, the clip had already been viewed nearly a million times, Diez told me. And from there, it took off. It was played more than 60 million times on social media and written about internationally.

I remember the first time I saw the video. 360 degrees of clean in less than 1 minute! I've had many dogs over the years. I know how much fun bathing them is — and that it always takes longer than a minute. So I was intrigued. It was a great video.

As a result, he was able to license the Woof Washer 360 to the largest As Seen On TV company. You can buy it today in Walmart, Target, and every pet store around the country. Just last week, it was featured on Good Morning America and Rachael Ray's show. Tellingly, the final commercial that was made doesn't differ much from the video originally uploaded to Facebook.

The take-away? A short commercial of your product can be incredibly impactful.

Top Considerations to Keep in Mind

ONE MINUTE VIDEO - Your video sell sheet should be about a minute long. It could be even shorter, but I'd hesitate to go longer. If you can't convey the benefit of your concept succinctly, you haven't really keyed in on it — or maybe there isn't one. Focus on hooking viewers quickly.

PROBLEM SOLVING - If your concept solves a problem, devote the opening portion of your video to that problem. Make it painful. Make it relatable. After something like 15 seconds, focus on the solution, aka your product. I've seen some videos that are in black and white at first. Then, when the product is shown solving said annoyance, color blooms across the screen. Everyone's smiling and happy. Life's great!

GET EMOTIONAL - There are so many different ways you can film your video sell sheet. This is absolutely an opportunity to harness your creativity as a designer and a developer. What matters? Connecting with viewers on an emotional level. You need to give people the solution they've been looking for. It's not about how sleek your video looks. You need to capture the magic, your wow factor. And you can use your iPhone to do it. 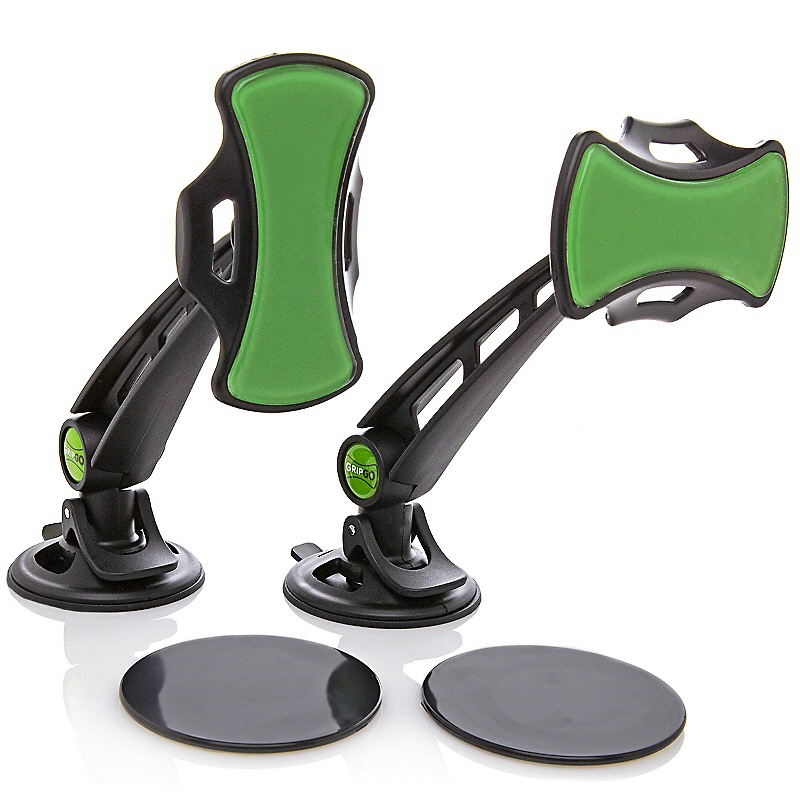 One of the best video sell sheets I've ever seen was made by my student Scott Baumann for his product Gripgo, a car phone mount, which became an As Seen On TV hit. Baumann is a professional designer who has licensed the rights to more than 40 products since he began pitching potential licensees about eight years ago. Back in the day, he would shoot on mini-DV, import the video, edit it, render it again and again and again, and then finally burn it to DVD and send a physical copy in the mail.

"Many of my concepts tend to be simple creative twists that, in my mind, offer a better solution to a perceived common problem. There's no better way to illustrate the unique performance and attributes of new product concepts than through the use of video." Video has been a driving force behind his success, he said. And although he admits producing creative and engaging video content fits naturally within his skill set, he thinks anyone today who has an iPhone, iMovie, and is a little bit creative can produce a "more than sufficient video demonstration of their idea." I wholeheartedly agree.

The video he created for Gripgo features a particularly thrilling moment: As Baumann drives down the street, he unsticks the Gripgo mounted to his dashboard and says, "This is my new iPhone 4." He then thrusts the unit (which his phone is attached to) out of the window and vigorously shakes it. The phone stays put! Talk about a wow moment. The benefit of Gripgo is explicitly clear: Your phone isn't going anywhere.

That video is a good example of just how important it is to understand and speak the language of the channel you're presenting to, Baumann explained. "Products that have a magical quality to them and that may, or may not, have a better or different way of facilitating a need — those kinds of products tend to fit well within the As Seen On TV format. You want to present your concept in a language and format they understand. It worked!"

Baumann put it another way: When it comes to product marketing videos, there really are no rules. Every concept has its own unique features and functions. His advice? "Show what those are in the most clear, concise, and creative fashion you can think of — that's it," he said. "We've all seen cheesy "As Seen On TV" commercials. But as cheesy as those are, there's a bit of science to them as well."

The commercial that was ultimately made to sell Gripgo is quite similar to Baumann's original concept as well.

PROTOTYPE - You don't need a perfect looks-like works-like prototype — far from it. From the right angle, crude prototypes look great on camera. Create different prototypes to meet your needs. Your prototype needs to work right once, or even not at all: You can piece together different clips and prototypes to give the impression that it does. Editing is your friend.

RECORDING DEVICE - A recording device, like your iPhone or a GoPro.

TRIPOD - Your hands will never be as steady.

LIGHTING - A small lighting kit or great natural light. I would always rather shoot in natural light, because it's soft. But that's not always possible. Does your video need to be perfectly lit? No, but it helps. I bought a $120 kit for my YouTube channel.

MICROPHONE - Bad audio is irritating and distracting. Some cameras have great built-in microphones.

Stage your video appropriately. If your product is used in the kitchen, film your video in the kitchen. If it's a garden product, film it outside in a backyard. Look the part. You get the idea.

Map out a storyboard and/or script first. Like I said, there are an endless amount of ways you can put your video together. Many of them do follow a familiar format, though. I recommend watching the videos on Allstar Product Group's website to get a sense of what that format is. That said, what's unique and powerful about ideas obviously differs. Remember what your intention is: To entice a potential licensee to ask you for more information.

LiteBrite TOUCH by Procreate from Procreate on Vimeo.

For example, consider the video Baumann created for Lite-Brite Touch, a new toy concept. Baumann has had notable success licensing his toy ideas to companies like Fat Brain. There isn't one word in the entire video, he pointed out. "I've found it's best to let the toy speak for itself. Show what it does in the most creative fashion you can, lay an appropriate soundtrack behind it, and get out of the way."

The video worked: That's what he sent to Hasbro, he said, and they got back to him.

Test for lighting and audio quality. Take shots from different angles, including close-up and at a distance. Watch them on your computer. (On your phone, they may not look crisp enough.) Which angles make your product look best? Experiment. You want to come away with more than enough footage to work with, so take a variety of shots. Play around. I've watched dozens of videos on YouTube about product angles. It's not as if you're reinventing the wheel here.

Consider hiring a professional to do a voice-over. You don't have to appear on camera if you don't want to, and you shouldn't if you appear uncomfortable. Voiceover specialists are very affordable — like $5 to $10. It'll leave a great, professional impression.

As far as editing is concerned, there are helpful tutorials on YouTube as well as Lynda.com. Most of my students hire a freelancer to help them. This is a good time to reiterate that whenever you hire someone to help you, make sure to have that individual sign a non-disclosure agreement that includes work-for-hire language. If there are any improvements to your concept made, you need to own them.

When you include a link to your video on your sell sheet, make sure it stands out. You want people to click on it, after all!

Whether you use YouTube, Vimeo, or another service provider, password-protect your video. (If you don't, your video could constitute public disclosure, which threatens your patent rights.) The analytics these sites provide will be useful to you. Baumann is a big fan of Vimeo in particular. "There are other providers out there, but Vimeo gives me everything I need and more to deploy my presentations in a highly secure manner."

One of his top tips: "Don't upload just one video and send that same link to all of the companies you want to present it to. Upload a separate video and corresponding password for every company instead. That way, you can track each company's engagement via the analytics provided for each individual video. As a result, you know exactly who watched it, when, and how many times. What better way to gauge their level of interest?"

I think this strategy is absolutely brilliant. The party with the most information always wins, especially when it comes to negotiating.

Designs that are initially rejected after being pitched using solely a 2D sell sheet end up being licensed with video. I hear about it all the time — video really is that powerful.