Notes from the Floor of the 2016 Paris Motor Show

For over 100 years, the Mondial de l'Automobile has been the gold standard in motor shows. The biannual show clocked over 1.2 million visitors in 2014 and continues to draw the largest number of attendees of any auto show in the world—beating out both Tokyo, Detroit and Frankfurt. Despite the Paris Motor Show being the granddaddy of all motor shows—it debuted in 1898 as the world's first auto show—the event continues to be an arbiter for trends emerging from the industry, but for how long? Notable absences at this year's show include manufacturers like Ford, Mazda, Volvo and more. Here are six items of interest for auto industry watchers from the 2016 Paris Motor Show: 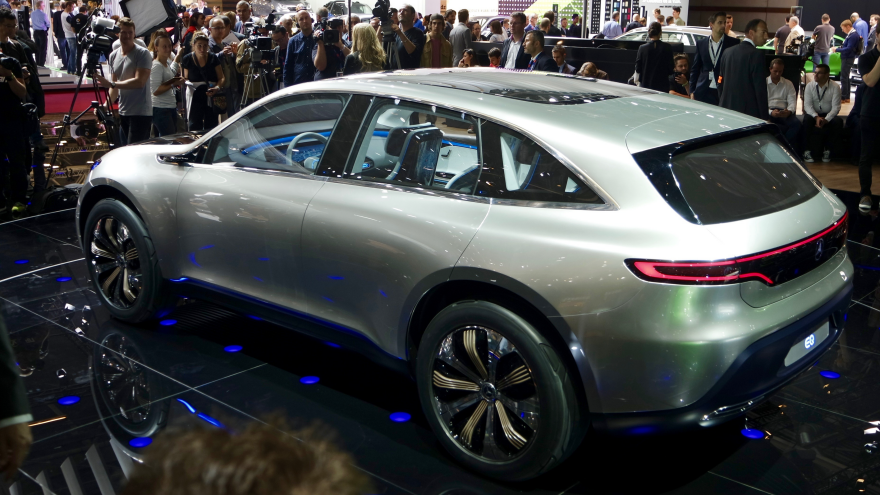 The rise and rise of the X-over…

The effect on the existing automotive landscape is all around us, and if you needed any further confirmation: Peter Mertens, Volvo's R+D boss explained the company's sales strategy: "Volvo is on track to sell significantly more SUVs and crossovers than any other type of vehicle by the end of the decade."

Suzuki's stand was 'on the way' to BMW and Audi's: a stepping-stone through to the major players perhaps, but I found myself heading to the stand a few times—initially to take a look at what is now a rarity, the pint-sized Suzuki SC100, and then to take a closer look at the Ignis, apparently the spiritual successor to the SC100. 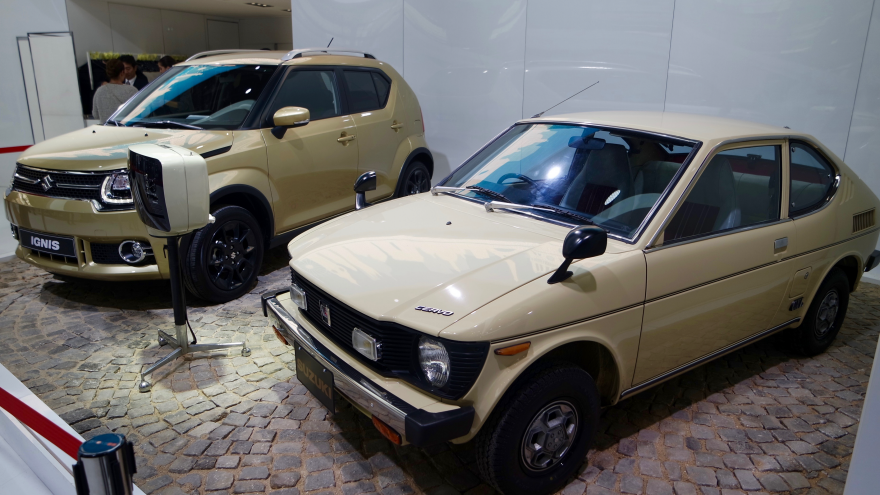 Of course now it's a X-over instead of the mini sports-coupe of the SC, but there's a certain playfulness about the Ignis that brings a smile to the face. 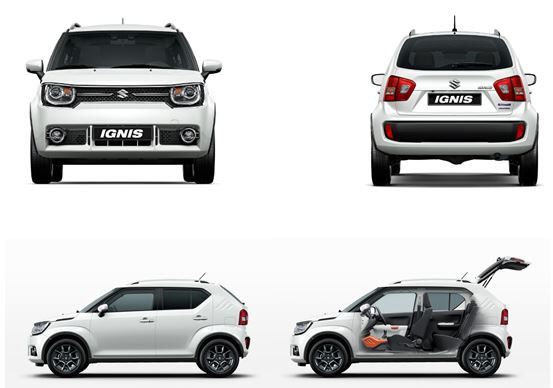 Designers talk about the importance of proportion and stance, something that's difficult to define but is linked to the position of the wheels relative to bodyside surfaces, and the balance and harmony of the silhouette. And in this respect, the Ignis is really nicely resolved. 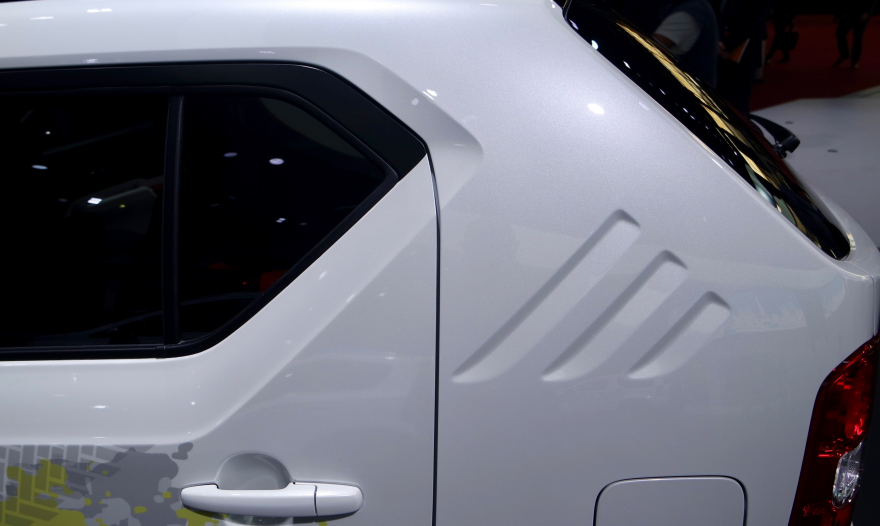 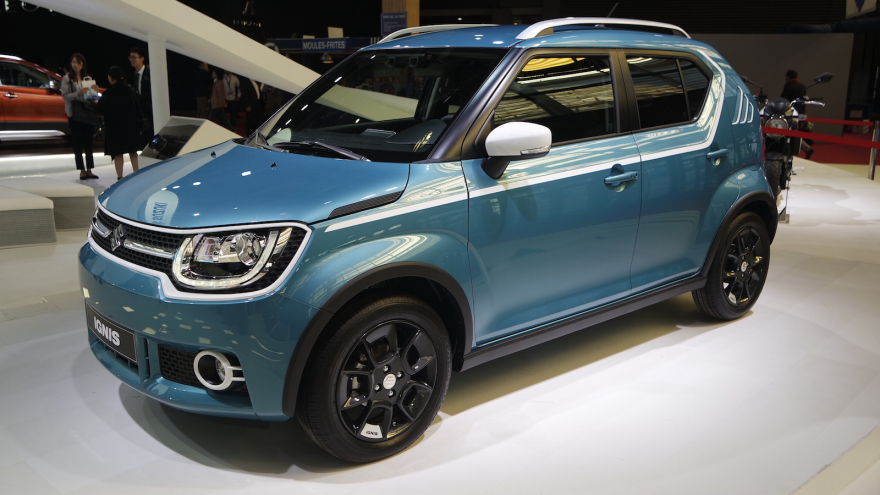 The juxtaposition of the side-stampings with the door cutline is brave. It shouldn't work, but it's unconventional and a little mischievous—characteristics that suit this little fighter well.

The more technologically advanced cars become, the more challenging it is to manage how information is communicated to driver and passengers. Most compact and sub-compact cars in the European market have a touchscreen to control media, and in some cases, climate-control. Move on up to luxury segments and we're faced with a dilemma: to illustrate the technical complexity of the product through an equally complex HMI? Or create a fiendishly complicated hierarchy to control-visibility, so that the complexity is 'hidden' under layers of commands. 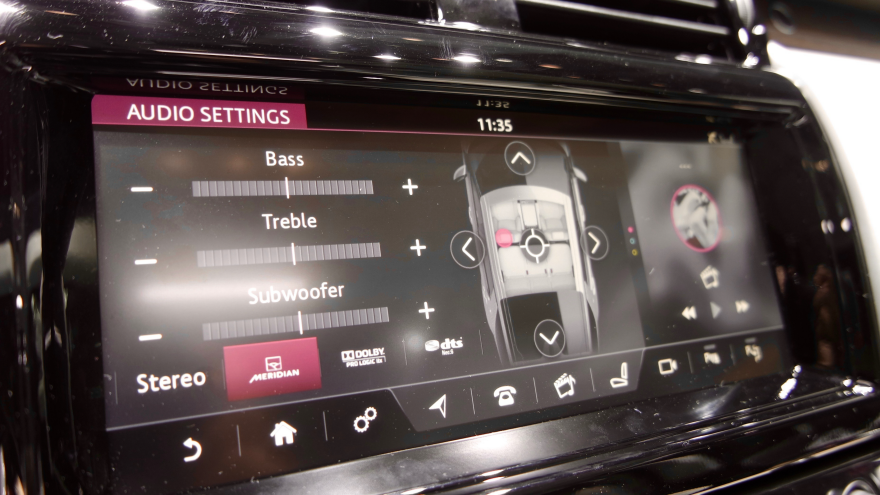 Well, judging by Tesla and Porsche, the question is a long way off from being resolved. Porsche's Panamera has a beautifully-cosseting cockpit displaying some mind-scrambling information, accessed by gloss-black buttons flush with the main console: just the ticket for adjusting the seat-heating controls at 150mph on the Autobahn. 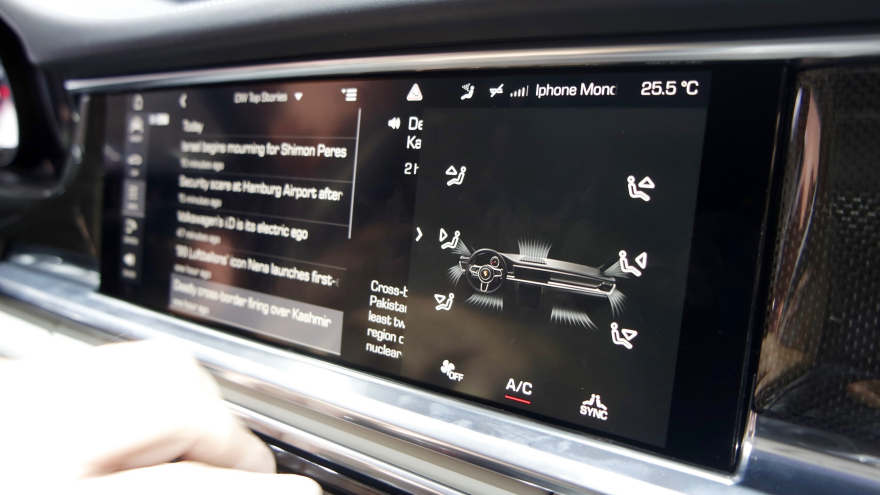 Tesla at least is honest with their solution: build the car around the huge central screen. It's the brains of the car—indeed it's the defining aesthetic of their interiors so far. Comforting to generation-tablet for sure, but the distraction capability of this glowing centre-piece is quite something.

One of the key elements of urban mobility is 'the last mile': the last-stage of a journey that's typically the most challenging—congestion, parking etc. So it's refreshing to see a mainstream manufacturer address this with a bespoke trunk-mounted electric bike, charged from the vehicle. 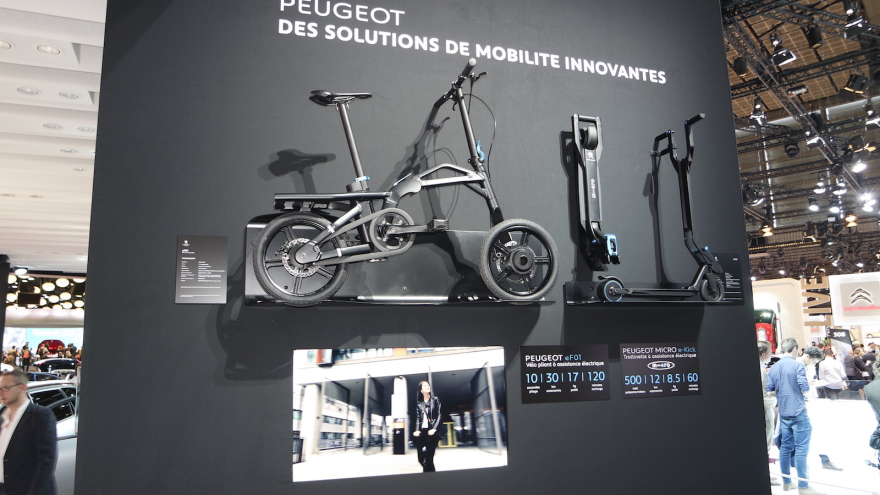 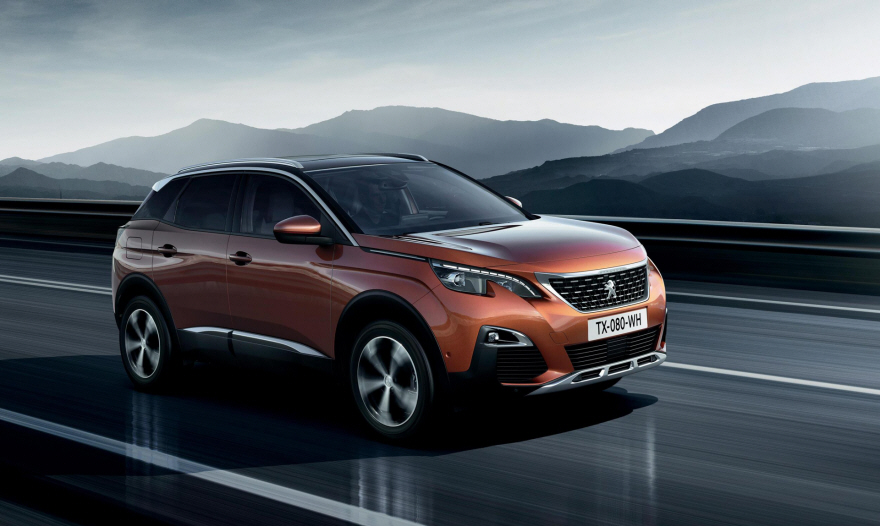 A collaboration between MICRO and Peugeot, the E-kick can actually cover 12km/8miles, so has a useful range. Concepts have, for years, explored this last-leg of the journey, a notable example the 2007 Opel Flextreme with a pair of Segways taking up some serious package space, but the 3008 is out there now which is a small victory for mobility. 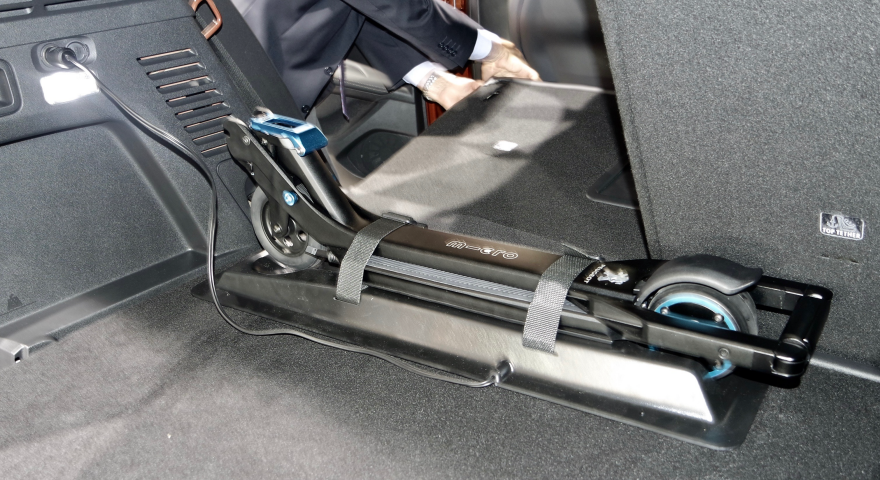 A shame then that the mounting fixture in the trunk looked like a complete afterthought.

VW's iD concept was the most-important car of the show for what it represents, rather than the vehicle itself, which, many designer's agreed, was a little too reminiscent of a cut-price BMW i3 for comfort. 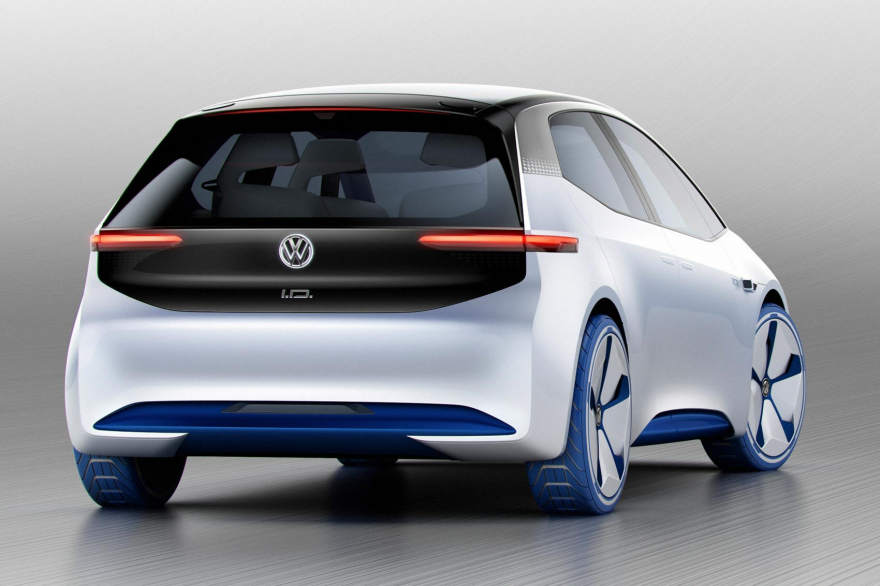 No matter—using a new MEB platform, the iD is the vision of a brand that plans on being all-electric by 2025. A bold vision indeed, though don't forget the all-electric reference applies to hybrid internal-combustion powered cars too. The key and potentially game-changing element with the MEB platform is the packaging opportunities it offers. 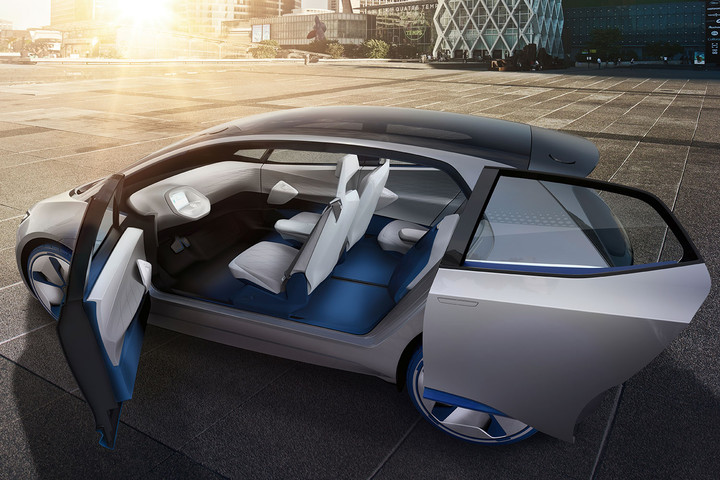 As they have done with the MQB platform before it, VW will be able to build a whole cross-brand portfolio of cars with this architecture, and will be able to leverage cross car-line commonality to produce affordable and desirable electric cars. According to VW Group CEO Matthias Müller: "This is the future—nobody can say when it is a reality but we are working on it,"

The writing is on the wall: car-manufacturers are realizing that motorshows are not a great way to sell cars. This year there were some big-league absences at the party: Ford, Mazda, Volvo, Bentley, Lamborghini..and many gave explicit financial reasoning behind their decision:

'Ford isn't attending the Paris motor show in 2016. We are diverting the money we would have spent there into events more closely aligned with our consumers—like the Go Further 3 event later in the autumn.'

Lamborghini: 'We look very closely at the motor shows we need to be at and where our customers are. We will not be at Paris. We need to have the best ROI each year.'

Questions often arise about the relevance of the traditional motorshow format: huge corporate stands, bright-lights, big budgets and beautiful women. What's interesting is the explanations by the OEMs, a clear indication that there are better ways for them to reach their customer base, to communicate their corporate message and to grow the brand.

Car-makers are desperate to attract millennials, a group that are key to any brand's survival, and market-research is feeding back that focused events, branding tie-ins, and targeted endorsements are becoming a more effective approach to meeting future customer interests. It's possible that future motorshows will be much more compact affairs.

Notes from the Floor of the 2016 Paris Motor Show