The West Coast is flooding, break out the bougie barware

As the Northwest is menaced by a drippy attempt at a hurricane, I'm finally starting to understand sauna culture. Who cares that nature wants to drown or freeze you if you have a hot box to sit in? But Oregon isn't a sauna culture, so we're doing other things storm-tossed people do to survive: lighting candles and drinking. If you've ever studied a piece of nice glassware in candlelight, you've probably wondered how the thing got to be so... sparkly. The answer is surprisingly un-simple. Here are a few insights into the making of cut crystal and nice barware that I've gathered whenever my power comes back on. 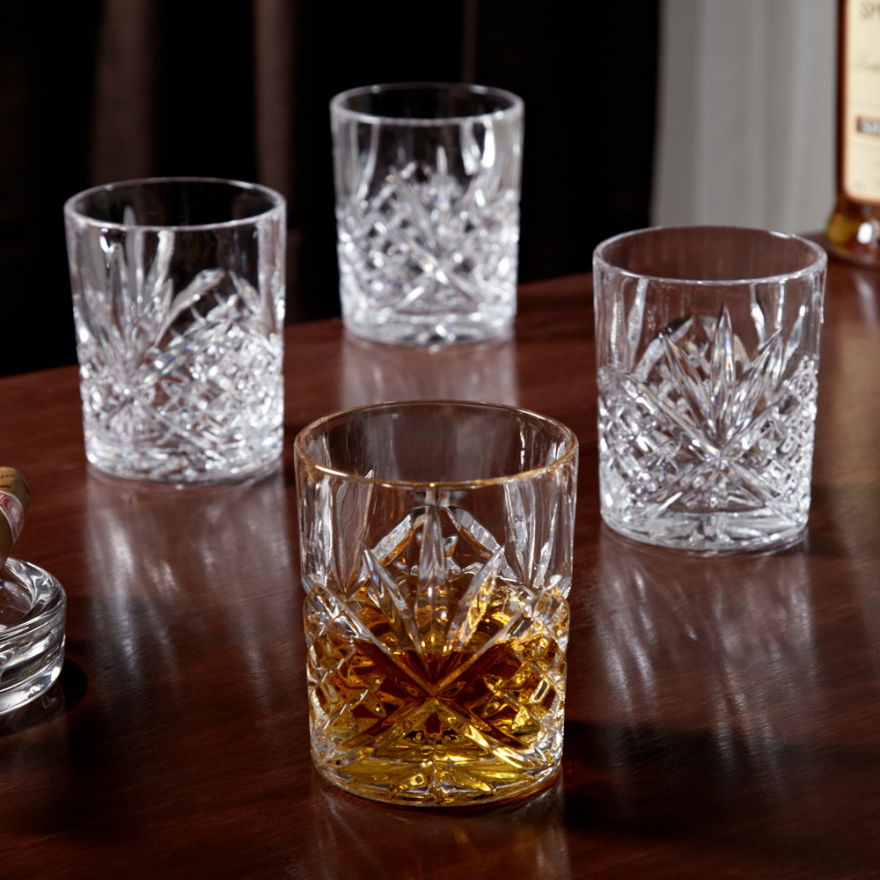 "Crystal"—more literally known as Lead Glass—is over 1000 years old, and cut crystal is close behind. Crystal differs from standard glass in a few key ways, none totally doctrinal but all functionally important. Where a common drinking glass is largely composed of silica + sodium oxide + calcium oxide, "crystal" adds lead. This has been seen from Venice to the Czech Republic, ancient Rome to Edo era Japan. Unsurprisingly, different countries and practices differ on the minimum lead content that earns a "crystal" classification—as low as 2% by weight in the States and twelve times that in Europe. Crystal drinkware generally contains 18-35% lead, and it goes even higher if the piece isn't for mouth use... but I'm not drinking out of crystal statues today, so we'll ignore those. 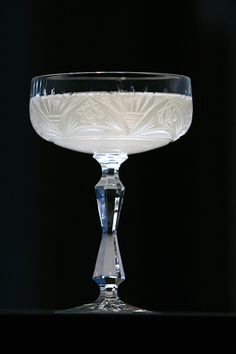 Overall, lead oxide and antimony are added in significant amounts because they allow a softer glass body, which makes deft shaping and cutting less difficult and less likely to blind the artisans with brittle chips. They also increase material clarity and heighten refraction of light, which is an important feature in good glassware that becomes amplified with facet cutting. Higher lead content also reduces viscosity, making the material more elastic and easier to work with at lower temperatures than standard glass. The possibility of lower working temps also means ability to eliminate air bubbles and other imperfections while melting and forming, which has helped build crystal's reputation as a flawless and pristine material.

To make the crystal itself, the silica, antimony, lead oxide and any other chemical variants are melted together over the course of a day. Broken pieces of crystal are often blended in to help smooth the consistency and reduce waste. Once melted, the glass is kept temperature controlled in batches that correspond to output.

That brings us to the second key component of fine drinkin' crystal—it's almost never produced strictly by mold. Despite using molds for generic glass production for centuries, and tons of technological advances in the last 50 years alone, crystal is traditionally hand crafted, and most mid- to high-end companies still hand blow their pieces. Nearly each piece still passes through the hands of several skilled blowers and formers. This is where it starts to get fancy and expensive. 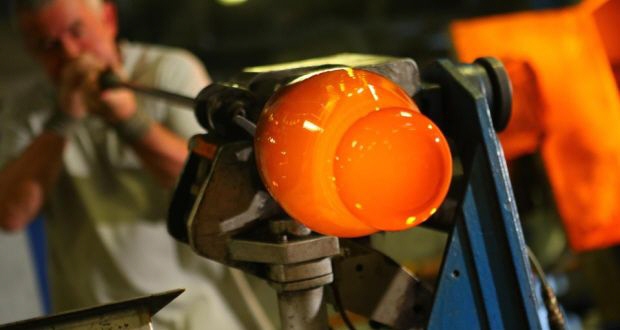 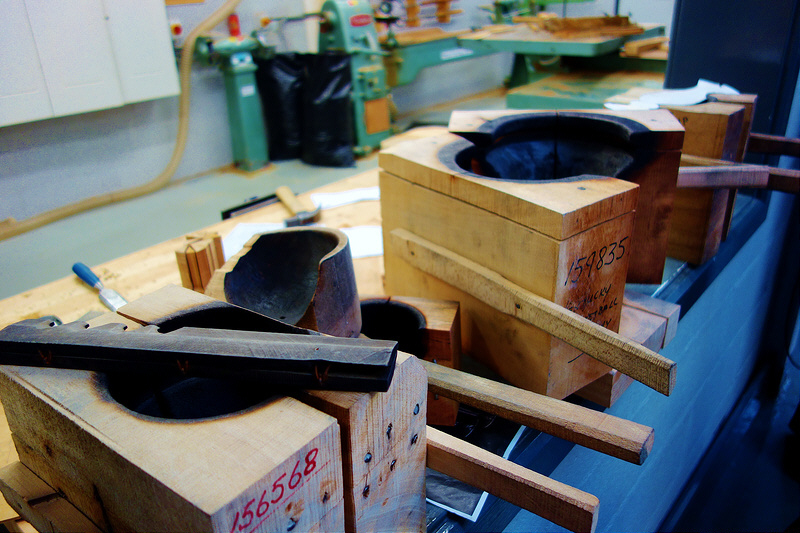 Whether stemware or a stouter cup, a crystal glass will usually start as a taffy-like blob daubed around the end of a blowing tube. It's inflated carefully, spun and shaped to spec inside a custom wooden mould, aided by a team of glass technicians. 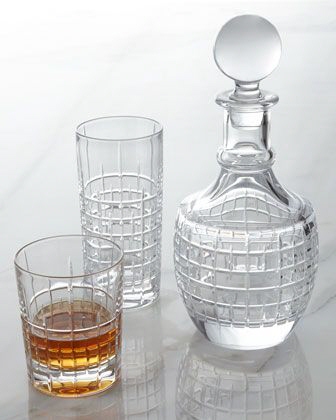 After the piece is blown, molded, hand formed, and its tube is removed, it is ready to be cleaned and patterned. Even this step is largely done by humans, cleaned individually and marked freehand by craftsmen with an intimate knowledge and eye for the patterns used. The marking is sometimes a direct representation of cuts to be made, and sometimes it's a guiding framework for more delicate and organic designs.

The cutting is the hardest thing to understand, from a modern production standpoint. Despite the prevalence of lasers, automation and etching fluids, most crystal companies still use just two kinds of cut, applied by hand with simple rotary diamond cutters. At heart, cut designs are all variations on a flat facet or a beveled cut, created by either round or angled cutters. Much like lapidary and gem cutting work, the enormous diversity of crystal patterns boils down to the size of the tools and the skilled "vocabulary" of the craftspeople using them.

What do you know! We're from Toronto!

The Waterford Company uses a mix of techniques at its famous Irish factory. In the tourist video above you can get a sense of the labor intensive blowing, and improbably steady hands, behind their perfect looking glass. You can also get a gander at irrationally patient craftspeople who can keep focus on their work while entertaining smalltalk from friendly Canadians. 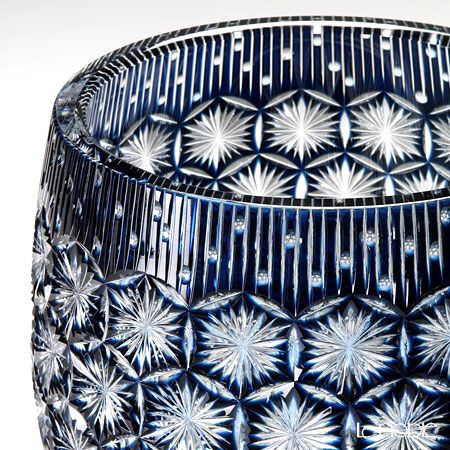 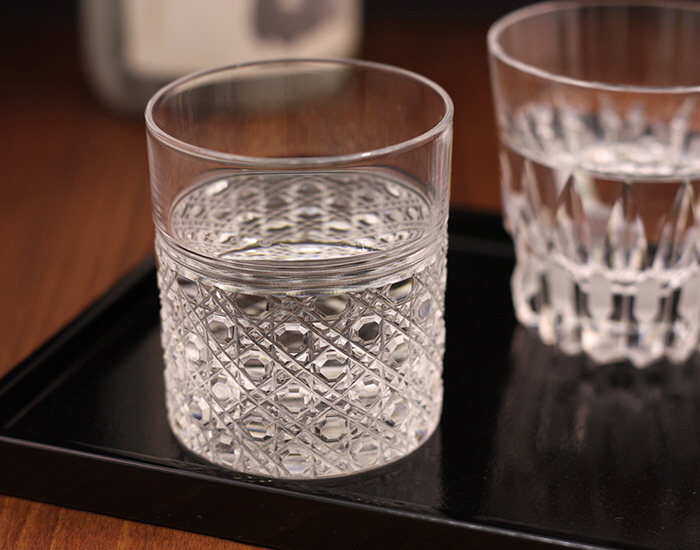 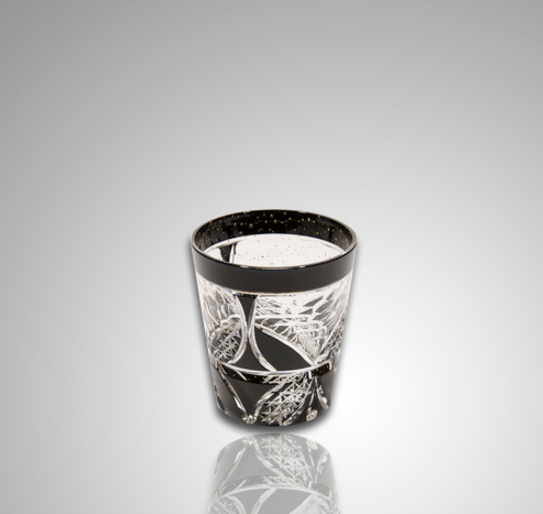 Japanese cut crystal also dates back several hundred years, but some of the most striking and lasting styles became famous during the Edo period of the 1800s. Delicate cups for tea and sake feature similar bevel and groove type cutting with a distinctive set of tonal patterns that pull from textile design and natural motifs.

This video shows the Edo era practice of two-color crystal cutting, called Kiriko or Satsuma Kiriko. The level of detail in this is… a bit boggling. The design is super nuanced, and you can start to forget that behind every cut is just one guy holding a glass bowl.

Look up Kiriko on YouTube if you're having a bad day.

This next video, the longest and most self-congratulatory I found, goes more in depth into Czech methods, both traditional and modern. Start at 2:25 for actual glass action.

Long, but if you've got a downed tree blocking your driveway it's a soothing watch.

While cut crystal might seem like an over the top indulgence left over from a Hapsburgian era where wealth was hereditary and no one cared about drinking lead—cough—the practice is a little practical. Food and drink, particularly liquors and wines, are enjoyed with all the senses, and adding light and depth to the drink glass can heighten the drinker's awareness of the drink's colors and qualities. While it's not as literally impactful as a wine decanter, a cut crystal glass changes the perception of what's being enjoyed. 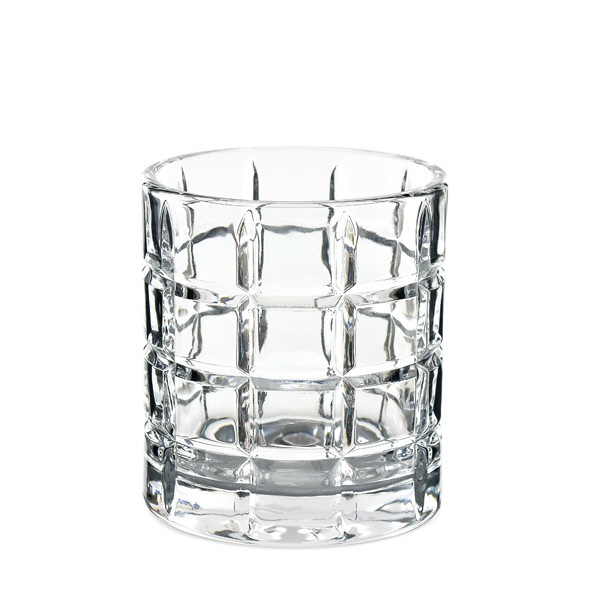 Common version of a Waterford design

Today a lot of standard barware copies traditional cut crystal patterns. Standard glass is often machine cut to pretty convincing effect. From faceted bases on tumblers to the simple "manly" Waterford grid used on rocks glasses, crystal designs are reproduced in standard glass using molds and forming. Generally, the nicer the quality of glass and the nicer the quality of the mold, the closer to "crystal" it'll look.

To see if the fancy set you picked up at Goodwill (or snuck out of your parents' prized liquor cabinet) has real crystal in it, look for extra sharp corners on the cuts and precise tight-radius definition of facets. Thanks to its lead, crystal is also comparatively heavy and gives a long ringing note when dinged by a fingernail or silverware. For comparison, your IKEA water cups give a thunkier standard glass tone, and cheaper glass throws a lot less light into and through your drink.

Regardless of leadedness or cutting pedigree, a satisfying glass is a great companion. Stay safe and stay warm!