Woe to the thief who tries to cut the SkunkLock.

According to the FBI more than 1.5 million bikes are stolen per year in the U.S. Some of those bikes weren't locked, but many were taken by thieves who cut the lock or cable with a hacksaw, bolt cutters, or the current favorite—a cordless grinder equipped with a cutoff wheel.

This thief is using a grinder to cut a U-lock. It takes even less time to cut or shear a cable or chain.

Inventors have come up with all sorts of devices to thwart bike theft: hidden GPS units, sirens that blast if someone tampers with the lock, and exploding devices that startle the thief and alert the owner. In spite of all the creativity lavished on these products, people continue to steal bikes because there is no lock that can't be defeated with readily available tools.

But what if cutting a lock was highly unpleasant? Perhaps not so unpleasant as the legally dubious practice of wiring a bike to shock thieves with 50,000 volts DC, but as unpleasant as being pepper sprayed or sprayed by a skunk? 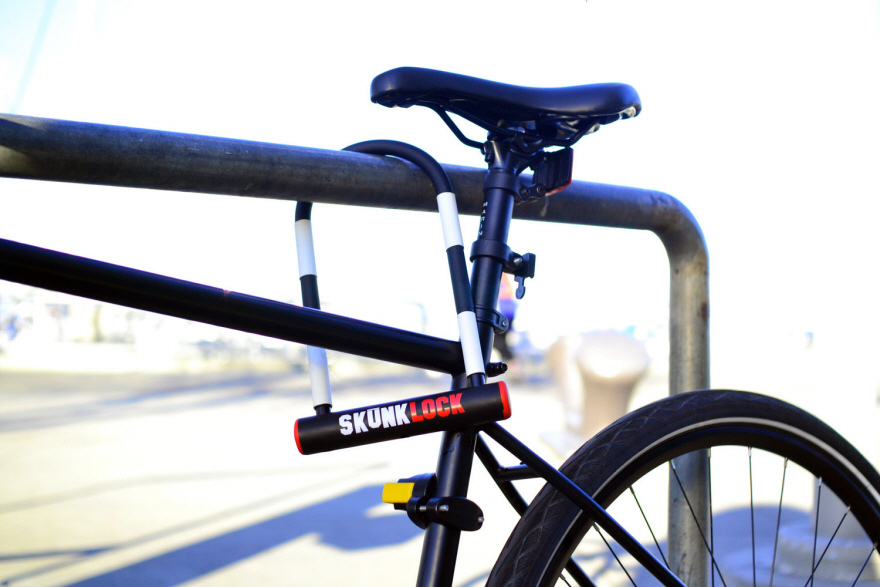 That's the idea behind the SkunkLock, a U-lock with a hollow core that contains pressurized gas. Cut into it and the gas blasts out, creating a stench so noxious most thieves will vomit and flee without being able to complete the job. And the smell will stay with them, ruining their clothes and the gear they are wearing.

Depending on where the lock will be sold, it's filled with one of two kinds of gas—an indeterminate "food grade" gas called D_1 and, where legal, a compound containing capsaicin (pepper spray).

As with a skunk, whose distinctive black fur and white stripe alert predators to its ability to conduct chemical warfare, the SkunkLock has black and white stripes. Those stripes may not register the first time a thief encounters the lock, but if it works as designed, they won't try to cut one a second time.

The SkunkLock was developed by a San Francisco inventor and is being crowd-funded through an Indiegogo campaign. It's expected to come out in June 2017 and will have an MSRP of about $160.