I read something recently that stopped me in my tracks—as conveyed by a number of statistics, having a kid is one of the worst things that could ever happen to you. According to the Washington Post, happiness levels of recently divorced or widowed individuals are still on average quantifiably higher than someone who just had their first child. One potential culprit preventing parental bliss? Lack of a good night's rest due to a crying baby. As Dr. Harvey Karp, founder of the parent-focused company Happiest Baby, writes, "studies show when you're getting six hours of sleep a night or less, you're the equivalent of drunk"—yikes.

Thanks to some help from artificial intelligence, good news for parents may be on the immediate horizon with the launch of SNOO: Happiest Baby's robotic baby cradle co-created by Dr. Karp and designer Yves Behar. 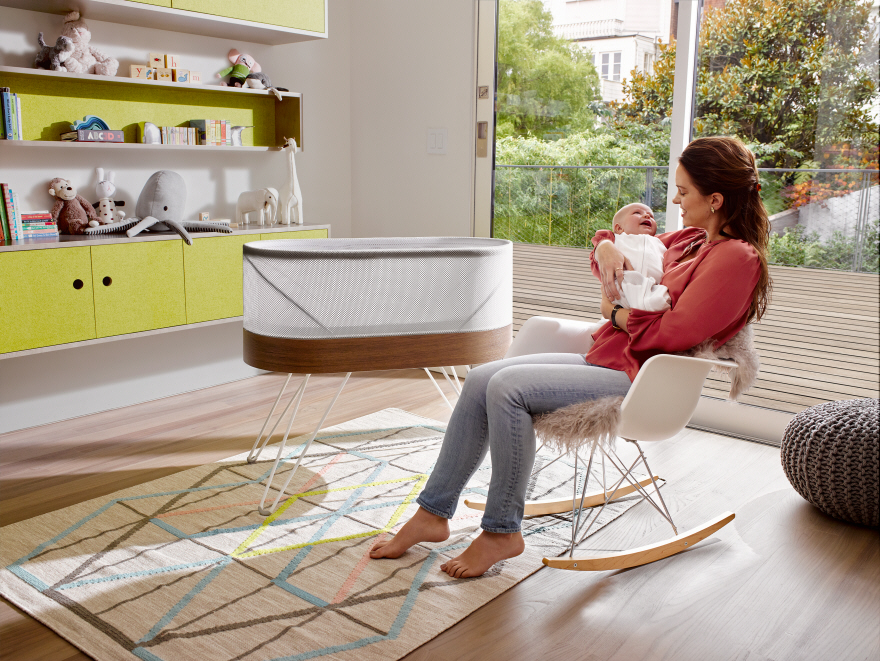 The cradle incorporates the same motions Karp has taught parents for over 20 years to help lull babies to sleep (his now famous "5S Technique") and is meant to act as an extension of the parent, assisting restless babies if all they need is a bit of calming stimuli. There are two key elements to SNOO's formula: motion and sound. Perhaps contrary to common presumptions, babies actually prefer a bit of noise when falling asleep. According to Karp, noises in the womb tend to be louder than a vacuum cleaner, so when the baby begins crying the cradle activates a loud whooshing sound akin to those in the uterus. Secondly, SNOO will activate a light jiggle motion, meant to remind babies of the constant motions in utero. This combination of the two results in an effect almost irresistible to babies, putting them in a calm trance.

A unique and effective element of this cradle is its sensitivity to the intensity of a baby's cry. Embedded inside the mesh of SNOO are microphones and speakers programmed to listen to the sounds within the cradle. "The microphones can make a difference between lightly fussing, crying or a strong cry," says Behar. Very cleverly, SNOO will react to these audio cues, moving differently and emitting different levels of sound depending on how much the baby is crying—adjusting almost like a human would.

If this product is any indication then yes, robots may be responsible in the future for a percent of child-rearing—and to some this may sound alarming. When imagining a robot caretaker, you might picture a creepy human-like figure rocking a baby in its menacing metal arms. Behar sees this as a faulty vision of artificial intelligence in the future, noting that when he first started telling people about the project they "would have this vision immediately of some white plastic human-like figure walking around with your baby. I think that we should design [robots] to have the type of human qualities that are important to us and the furnitures and the objects that we live with, not some technology that looks overwhelming and possibly that we have a hard time relating to." 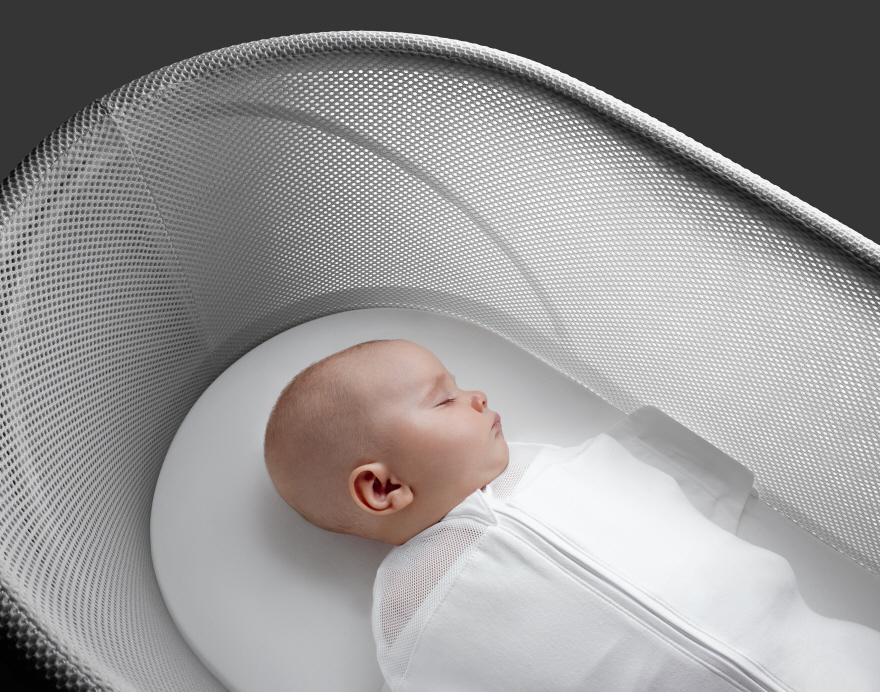 To prove that the future doesn't have to be as scary as it seems, Happiest Baby went through an enormous amount of testing to ensure that the cradle was not only effective, but also even safer than a conventional bassinet. For one, they tackled the issue of keeping babies on their back, which SNOO hopes to resolve with its safe swaddling system. "Swaddles are something you're taught at the hospital on how to wrap your baby before they go to sleep. They come apart, they get undone. It takes a bit of technique," Behar, a father himself, says while adding that an activity like swaddling is not necessarily going to be done perfectly at three in the morning. His design attaches to the SNOO quickly easily, and the cradle is designed not to move unless the swaddle is properly attached. This functionality guarantees a consistent swaddle every single time that keeps babies secure amongst the cradle motions while also comforting the baby (and while to many adults the swaddle may seem constricting, the design actually confines to a baby's preference for a tight space similar to the womb). 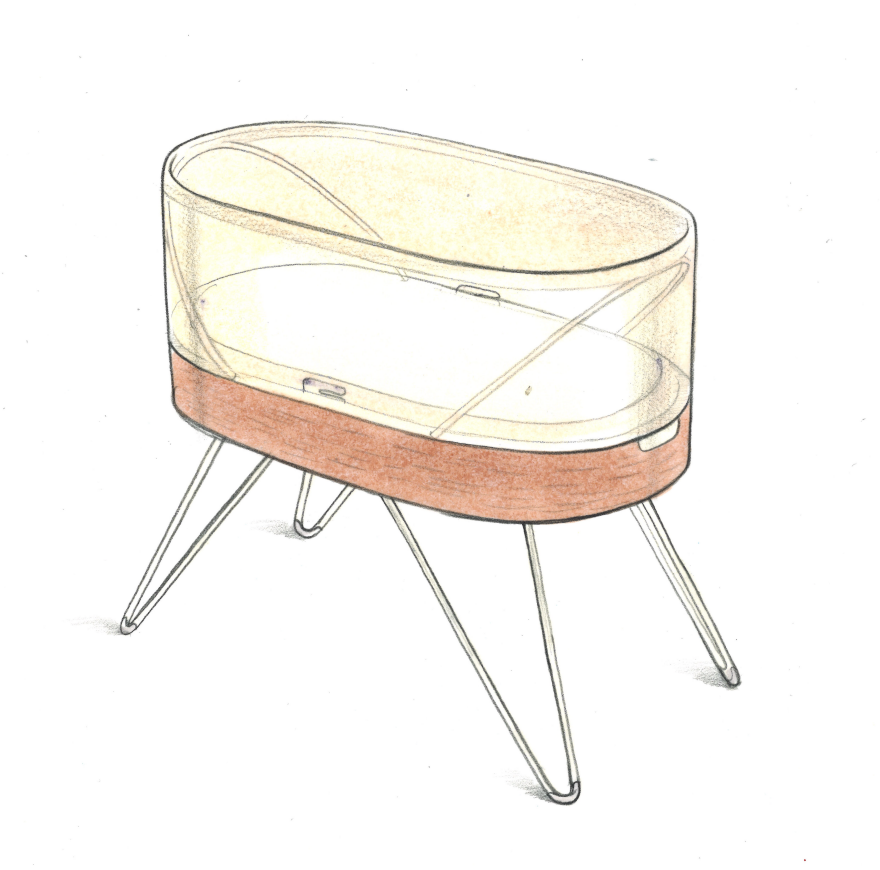 A final form sketch for SNOO

Material was a large concern throughout the design process because the bed had to be designed not only for comfort, but also safety and movement. For one, the material had to help avoid gaps in the cradle as the mechanics inside create motion. Mesh seemed to be a wise material for this application as Behar mentions: "the mesh distorts as the mattress goes left to right, back in forth. That distortion was key in figuring out the structure that would never have any gap exposed...and to keep the baby safely inside." Conveniently, using mesh for the surrounding structure also gives visibility to the parent so they don't have to get up to see how the baby is doing. 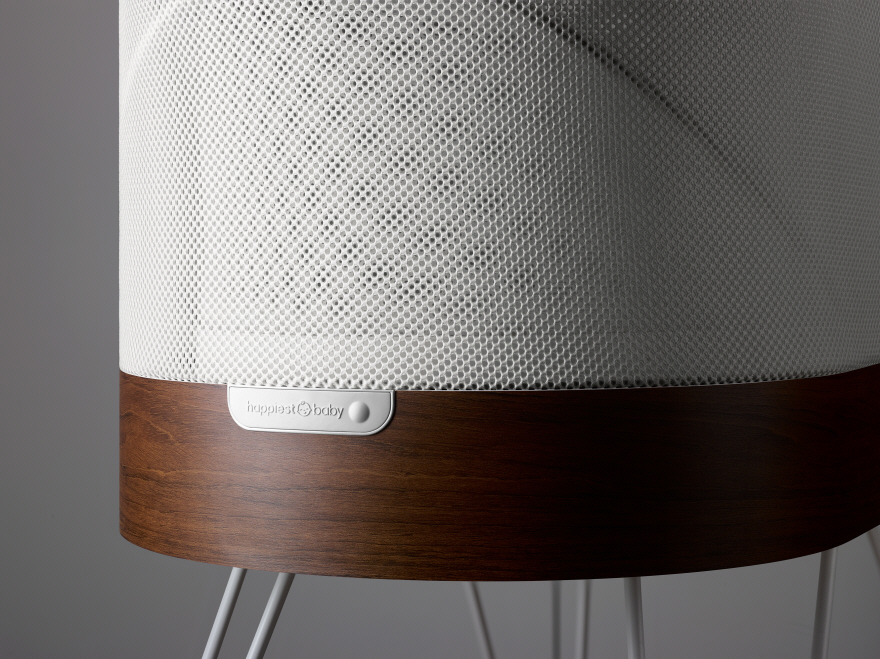 Despite their obsessive amount of safety testing, any parent out there may still be lingering with questions and concerns—and this was the ultimate design challenge during the creation of SNOO. As it seems, the biggest obstacle designers face within the future-gazing arena of artificial intelligence doesn't have as much to do with the technology as much as it does creating something that feels welcoming and human-centered. Behar stresses that "the product has to live in a home, it has to be a beautiful object, and it has to reassure."

The lesson I take away after my conversation with Behar is that it feels very apparent as designers move into the realm of artificial intelligence that they must be thinking critically while also challenging their ideas of what robots of the future should look like. A product like SNOO cannot afford to feel as overly technical as AI often appears in cliched sci-fi or Hollywood depictions. "I think the psychological nature of design is absolutely critical there in order for us to deliver the objects that we really want to adapt into our lives," he emphasizes, "I think if we don't do that, these technologies will be quickly rejected."