The Urbanization of Farming—A Love Story

Farming is Filled with Emotions

For the over two million American families who farm professionally, their work is toil and struggle, risk and fear. It is also joy and love, commitment and loyalty. Farm stories are generational, passing down both knowledge and lore from one generation to the next—from tales of the painful, lean years, to romanticized stories of great harvests past, to revolutions in farming that changed the entire industry. For millions of farmers, their work is fueled by a passion for family, community and country.

Although 58% of our produce comes from small family farms, for consumers, these farmers are often an invisible link. Traditional farming happens far from urban centers, where the majority of Americans live, offering little connection between farmers and consumers.

Nate Storey, founder and CEO of Bright Agrotech, wants to use cutting-edge technology to re-establish this link by reinforcing the critical role small family farms play in bringing food to our supermarkets, restaurants, and homes.

For Storey, it all started with his own family history and a deep connection with the soil. He hails from a family of sheep ranchers in Montana by way of Canada, who, growing up, related romanticized stories of early settler ancestors and hard times survived on the land. Enchanted with the tales of his rancher grandfather, Bob Storey, Nate grew up with a healthy respect for the rigors of farm life. 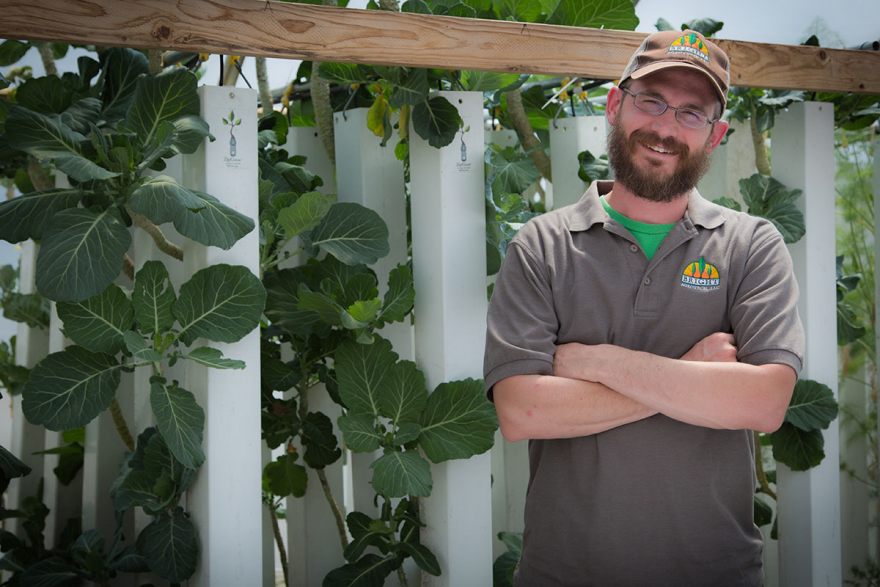 Earning a Ph.D. in Agronomy, Storey became immersed in the technical language of agricultural methods, while remaining grounded in the stories, land, and people essential to understanding the farming culture and practice.

Storey's company, Bright Agrotech, is a technology start-up designing innovative solutions that support small family farmers working in vertical farms. Vertical farms are built in indoor environments, generally near urban areas where farmers need to optimize a limited amount of space. Many use hydroponic systems - technologies that use nutrient environments without soil, to grow produce. The USDA identifies hydroponic farms as "a growing area of commercial food production" that will become increasingly vital to our food system as our population continues to gravitate toward urban centers. Currently, approximately 21,000 vertical, hydroponic small family farms exist in the USA alone. 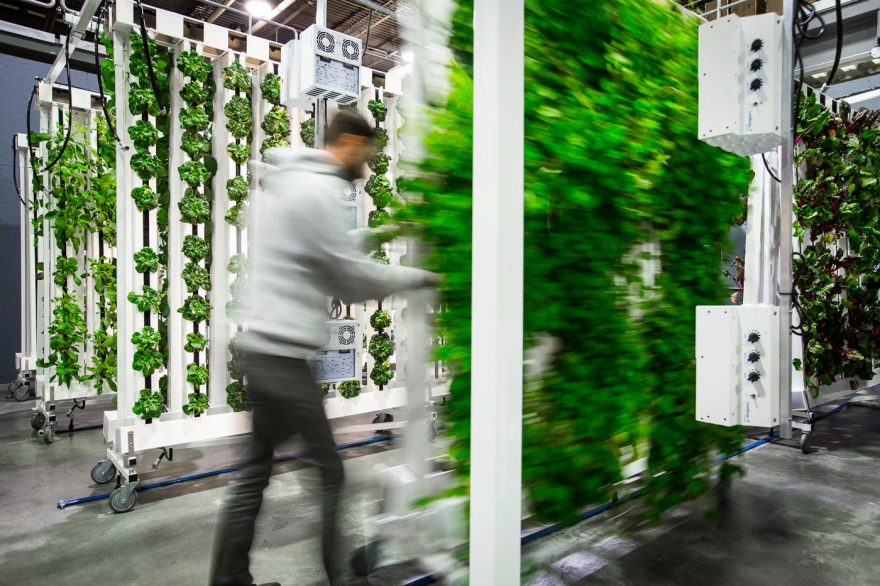 Innovators like Bright Agrotech are developing creative solutions that address the unique constraints of these progressive farming environments. "Nothing has been designed for this type of farming before," Storey says.

"Our farmers needed a high wattage bar without the adverse heat loads of traditional LED lighting. We developed a way to accomplish that with water cooling. We connected it to a chiller system. The entire thing is basically set up to run heat neutral in the growing environment," says Storey.

The second is ZipFarm: an Internet of Things system and the company's first indoor turnkey product, which delivers a comprehensive solution for lighting, temperature control, as well as growing and dosing equipment.

"These farms are incredibly complicated. There are thousands of parts, so it's almost like building a car. ZipFarm was our attempt to make it more accessible to more people, in a way that is flexible for a lot of crops and a lot of different sales techniques," explains Storey.

Since the Bright Agrotech customer typically works on a small farm, selling into niche markets, the company has taken the initiative to not only provide them with the tools they need, but also to develop a network that connects them to other farmers, agricultural technology experts, and consumers.

"If you want to be a farmer, if you want to do this really important thing, how can we help you do that," asks Storey, outlining the central mission of Bright Agrotech. "Bright Agrotech is building the infrastructure for a more decentralized and democratized food system where access to fresher, transparently grown local food is paramount," he explains.

"In some industries, people talk about sacrificing for profits, but in farming, you're often sacrificing for life," says Storey. "In traditional farming, you have an entire culture that is very resistant to change, because change represents risk. The risk of losing 1 or 2% might kill you over the course of a decade, or a competitive disadvantage might kill the farm over one or two decades," he explains. "But we're talking about high-tech farming here, not scrapping it out on a parcel of dry, rocky ground. We're leveraging technology to grow."

"I don't see us being able to do it without Autodesk technology," says Storey. "In the last 9 months we've used Fusion 360 to design, model, manufacture and certify a line of custom LED lighting. We were able to go from zero to certified product in 9 months, a product we can sell to our farmers."

Early in the development process, the Autodesk Entrepreneur Impact Program provided Bright Agrotech with the software and additional co-marketing to support the work they were doing. At that stage, Storey was still trying to figure out where he was going with his efforts. As he puts it, "We started with the design philosophy that simpler is always better. When you're first getting started, your building blocks, your core principles, should always be very simple. At the same time, we keep as many options open as possible." 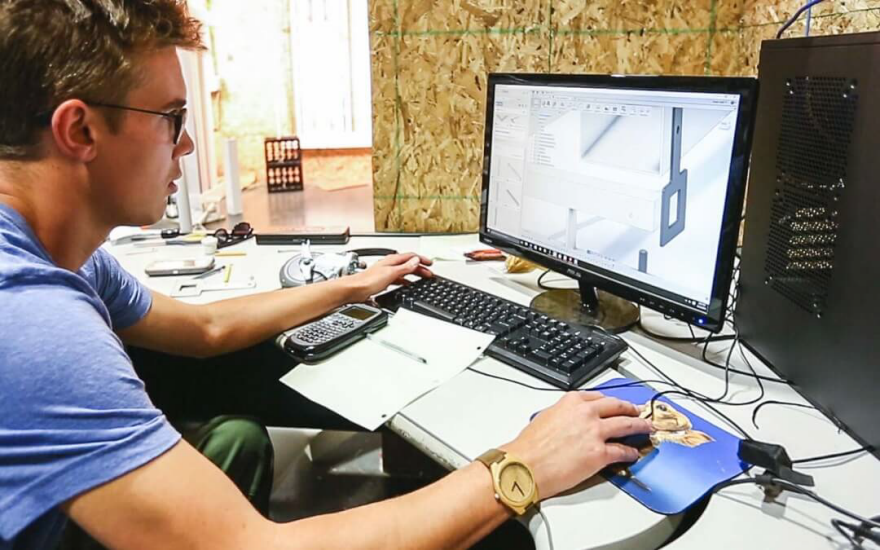 Bright Agrotech was also able to develop their marketing tools with Fusion 360, in parallel with the actual product development. Says Storey, "We were able to create near photo-realistic images and begin building our markets before the Coolbar light was complete. That is a powerful thing for a company like ours that has to move fast, because the lights cost a lot of money to develop and build. We have to have these things sold by the time the first run is done."

The Next Green Revolution

Storey wants to build bridges between the farmers who cultivate the land and the consumers who eat what they produce. The connection, as Storey tells it, is critical. This is the next green revolution.

For Bright Agrotech, this means creating custom structures and even more robust turnkey products to help farmers build and thrive. 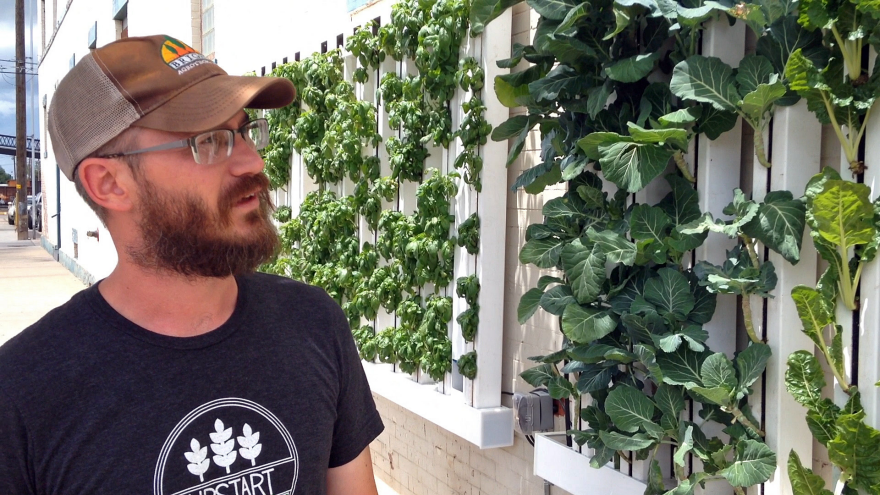 Nate taking a look at one such architectural application

"It's become a personal thing to see more young people have access to farms and farming," continues Storey. "As we're moving agriculture closer to the cities, it gives people a chance to interact with farmers more closely, and I'm hoping that eventually it offers a bridge to traditional field producers, as well, so their stories can be heard and people can understand their situation better."

To that end, Storey created Upstart Farmers—a network of small family farmers working with innovative methods—to both support their labor and to encourage more young people to choose farming as a career. The network currently claims 110 farmer members on 5 continents, who share resources and information to support them as they grow.

"When you throw a bunch of really smart, passionate people together, beautiful things happen."