Does the Kickstarter hit whisk all your problems away?

I've been on a mission to discover the best new kitchen products on the market through my own rigorous baking tests. This week, I put the Kickstarter smash hit, WHISK WIPER, through the Core77 Test Kitchen: Cornbread Challenge. WHISK WIPER has raked in over $67,000 on Kickstarter, blowing way past their $10,000 funding goal in just one day. With 20 days still left to go—that's not too shabby. What does WHISK WIPER do? It aims to solve a baker's worst nightmare—a messy, gooey kitchen workspace.

WHISK WIPER is a thick, palm-sized slab made of elastomers that attaches to just about any whisk on the market. To use the charmingly low-tech device, you insert the whisk's loops into WHISK WIPER's meticulously placed slots. Slide WHISK WIPER up to the part where the handle and prongs join, and you're ready to go. Once you've finished whisking your batter, icing, ganache, etc., slowly slide WHISK WIPER off of the whisk to get rid of extra gunk. Then, wipe the gunk left on WHISK WIPER back into your bowl to save ingredients.

I ran WHISK WIPER and its accompanying 11" stainless steel whisk through various baking scenarios, keeping their Kickstarter claims in mind throughout the entire process. Here's my full commentary of what went down paired with each claim. Let's get baking:

Ease of Use—Getting WHISK WIPER on My Whisk 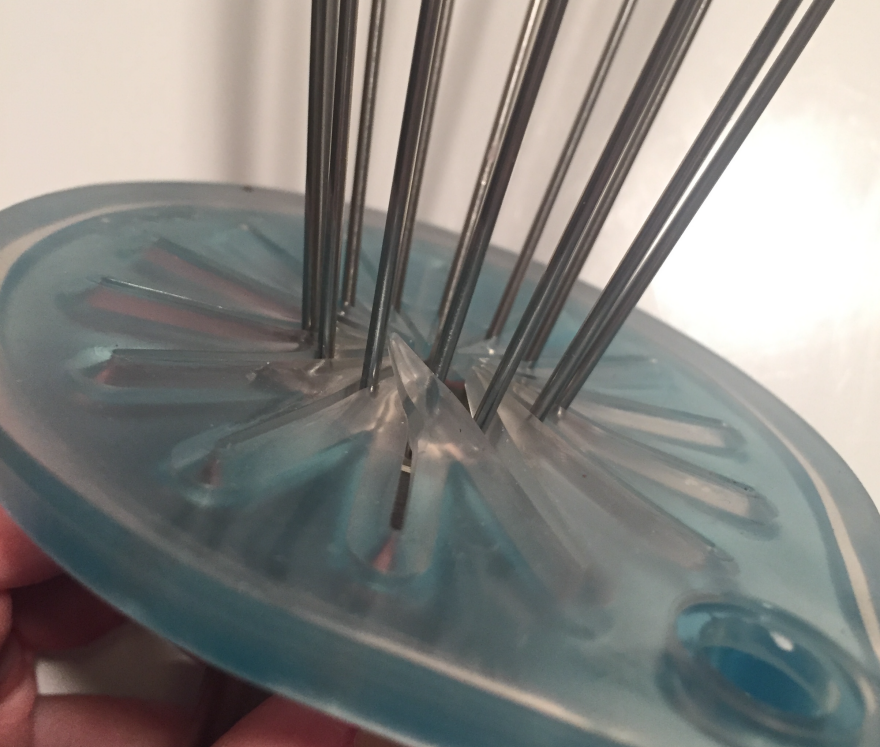 The first time around, this step was a bit of a struggle—whisk loops move around easily, which makes them difficult to work with. I spent a few minutes taking WHISK WIPER on and off of my whisk to see how quickly it would become natural. After just the fourth try, it was a no-brainer. The only thing that kept tripping me up during this step was the slot points' occasional rogue attitude (shown to the left). This was an easy fix, though—it just took an extra second to direct them. Once you figure out the process, it's easy as pie... or cornbread.

Claim 1: Whisk Without Getting Stuck—Wipe the Loops as You Pull WHISK WIPER off, Gathering the Batter on Top

Next, it was time to put WHISK WIPER's main feature to the test—sliding it off of the whisk. I was nervous that the relatively big slots would let too much batter through, but this wasn't the case. WHISK WIPER held its own against both thin and thick batter (I tested it with two thicknesses and washed in between uses). This is how the whisk and WHISK WIPER looked post-slide for both thicknesses: 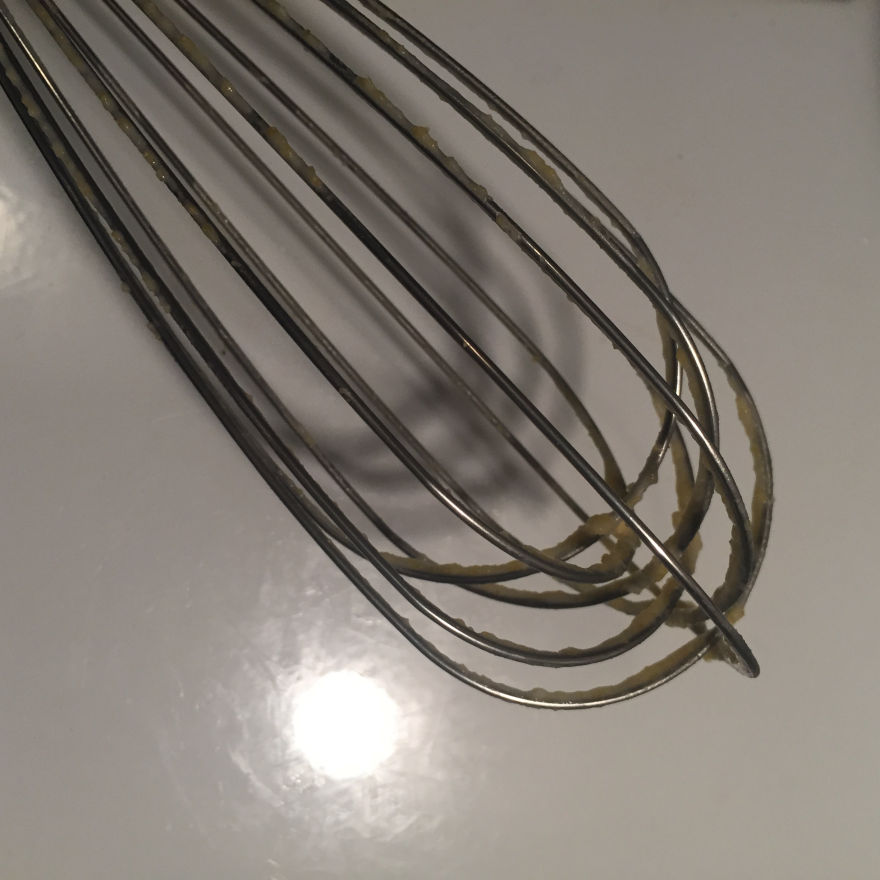 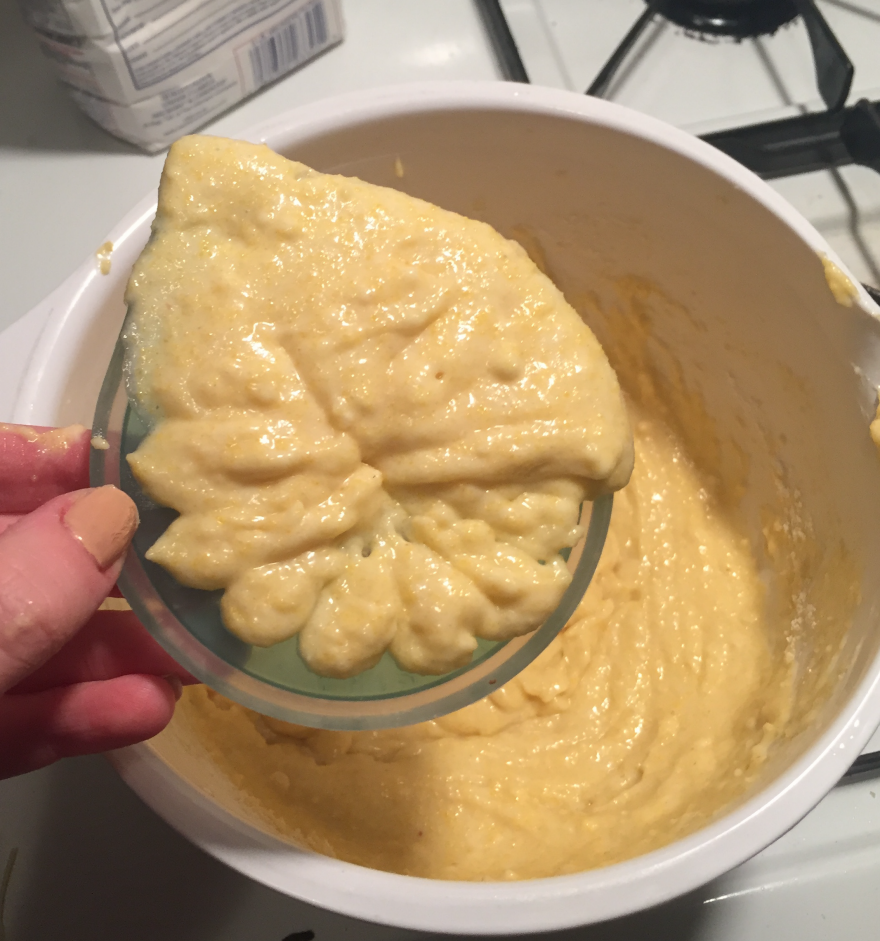 Pretty good! WHISK WIPER wiped almost everything off of the whisk, and it saved a TON of batter—about the equivalent of half a medium-sized corn muffin.

Claim 2: Your Frosting Belongs on the Cake, Not in the Sink—Return That Batter to the Bowl With a Simple Swipe

That's what I like to hear—I hate wasting ingredients! True to form, WHISK WIPER delivered. As I just mentioned, I was able to salvage a notable amount of batter. While the process was easy, the result was a little messy. Since you can't wipe it this way due to shape constraints: 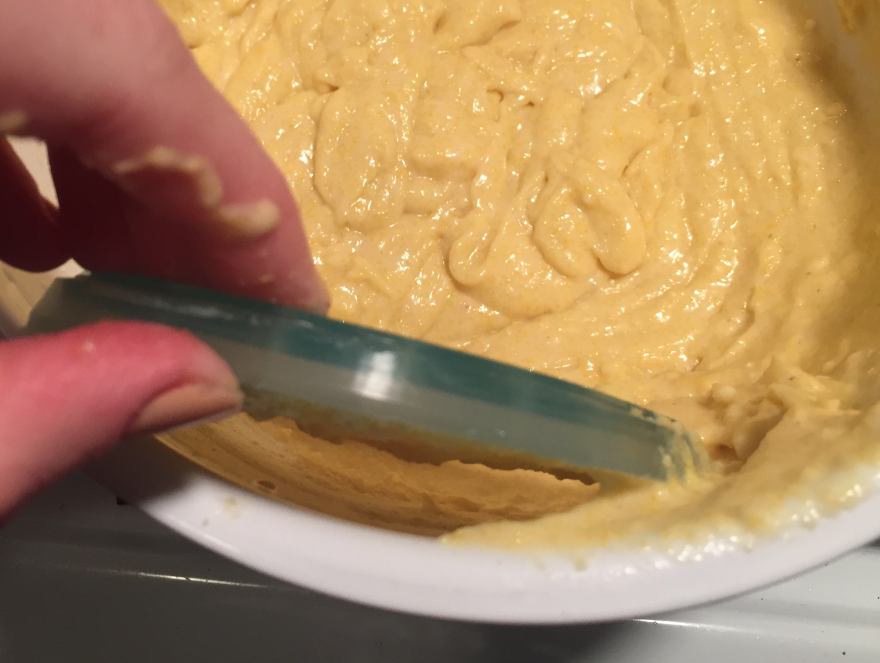 you have to wipe WHISK WIPER on the upper edge of the bowl. This creates the potential for mess—having batter on the upper rim of your bowl makes it easier for batter to touch you or your clothes—but this is a very minor note. Saving batter is 100 percent worth it. In my opinion, this extra feature is what sets the utensil over the top.

Claim 3: Focus on Baking, Not Cleaning—Catch Drips and Splatter, Keeping Your Hands and Counter Clean

I don't have to say much about this because it's completely true. I made sure to be extra sloppy during the whisking process to see if this would actually work. Here's proof that it did: 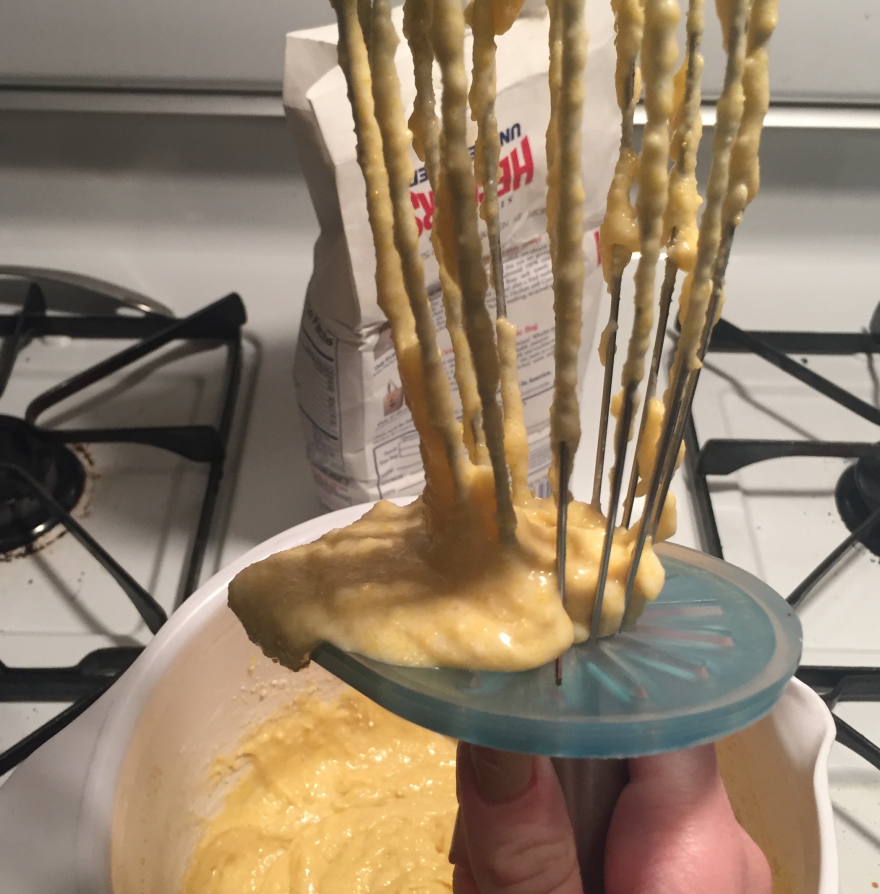 Once turned back around, the extra globs of batter dripped back into my bowl, and the rest was taken off when I was finished using WHISK WIPER.

I don't own a dishwasher (it's hard out here in the city), so I was worried that it's tiny slots would cause issues during the cleaning process. I was wrong. I simply turned on some hot water and rinsed. WHISK WIPER is dishwasher safe, though, so you lucky folks that own one have it even easier. Here's what it looked like after about one minute of rinsing—some little bits of batter were left, but with another 10 seconds, they were gone: 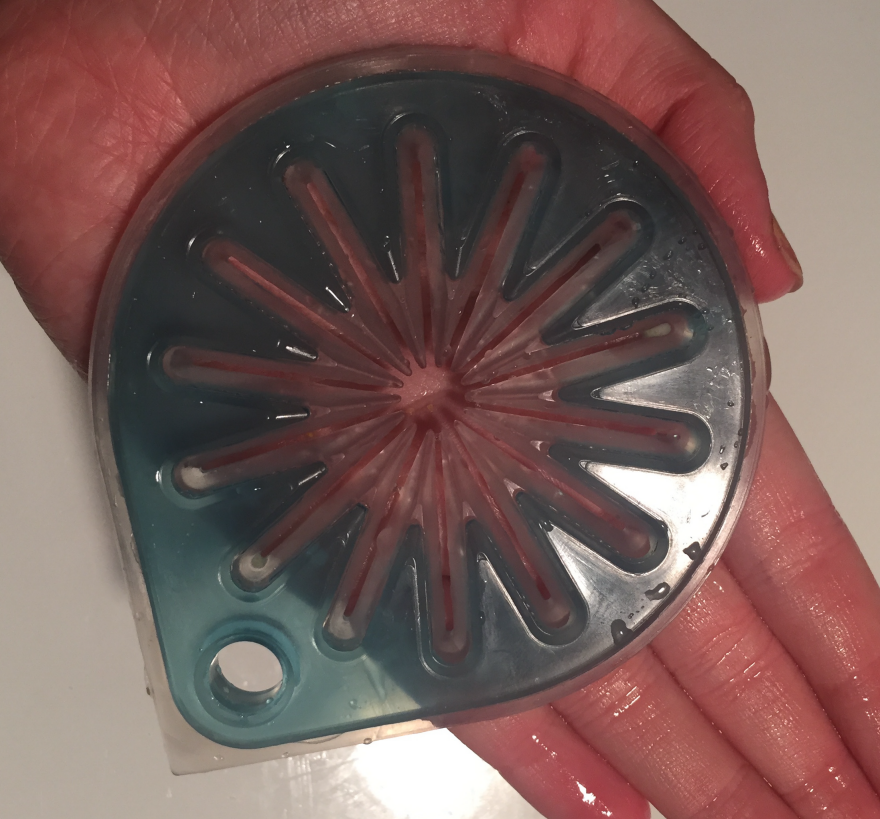 The whisk was also easier to clean than expected. Since there were no globs of batter, hand washing was—dare I say it—easy. That's borderline impossible for a whisk, so this little slab of magic definitely does its job.

Here are a couple of bonus features worth mentioning:

Sometimes when I use a whisk, my hand slips all over the place, touching the batter that I'm whisking—which is annoying and messy, to say the least. I found that WHISK WIPER fit so tightly to the whisk, that it actually held my hand in place. As soon as I felt WHISK WIPER start to move, I was able to reposition my hand without getting messy. 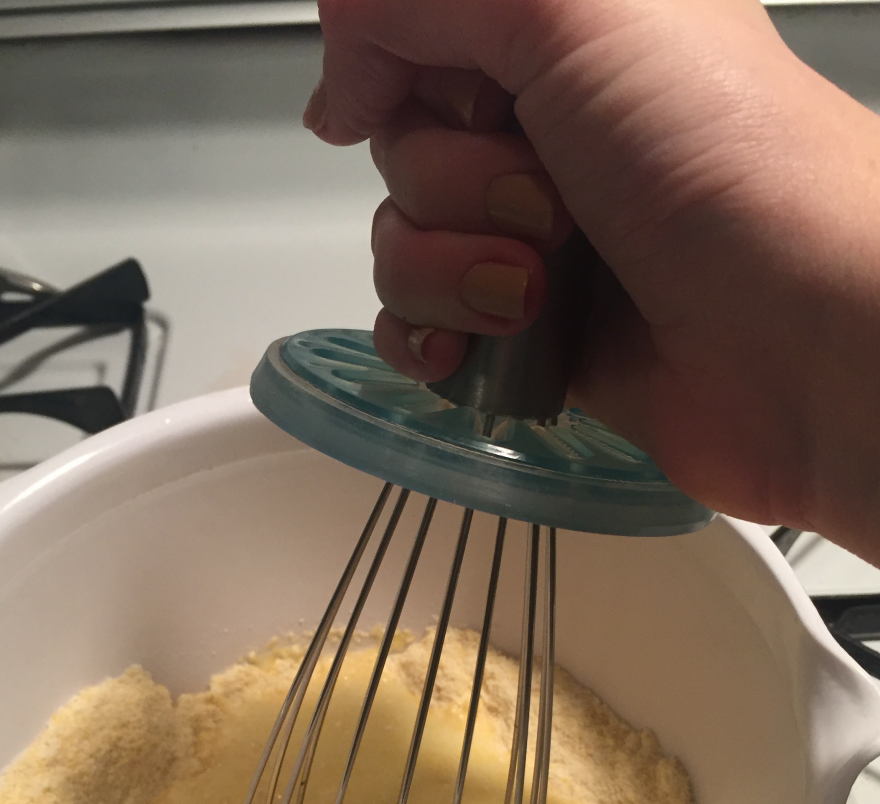 Even though WHISK WIPER can fit pretty much any whisk, the one it comes with is great. The material is sturdy, but here's why I like it: the part where the loops meet the base is coated in what seems to be silicon. This makes it much easier to clean than other whisks. When placed next to a whisk I already owned, you can see how batter could easily get trapped in the holes around the loops: 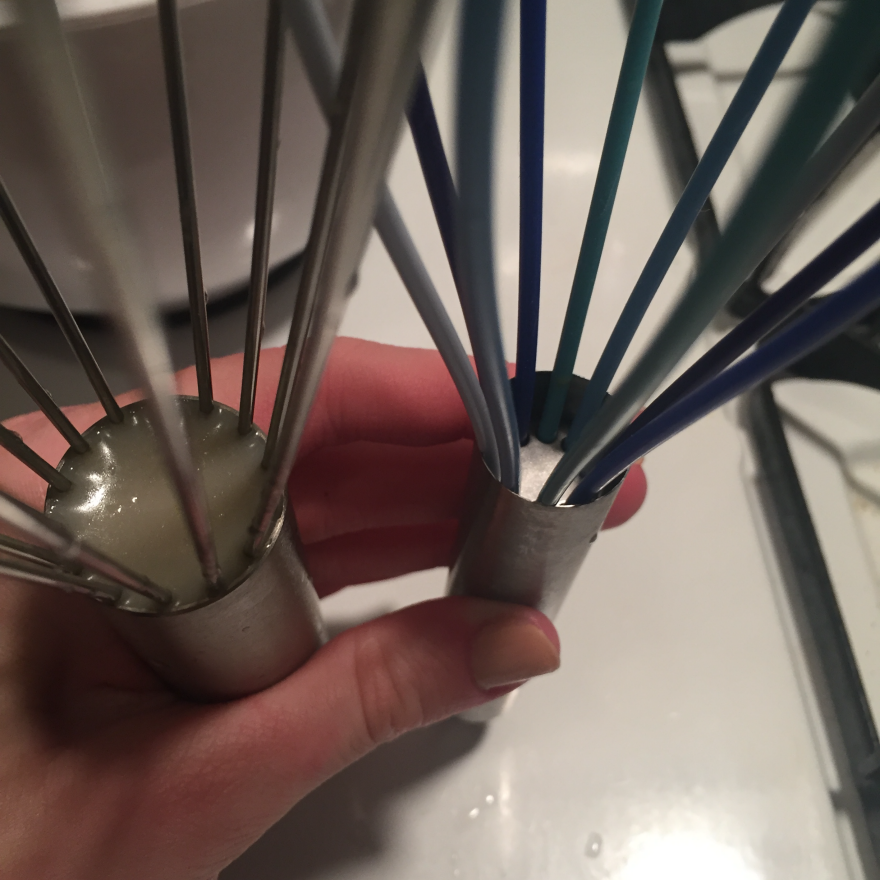 WHISK WIPER designer, Matthew Michel, aimed to reinvent the whisking process, which is very hard to do for long-standing kitchen utensils. Did his team succeed? Yes, they did. And they didn't do it by altering the whisk's original form. I personally despise using whisks while baking—I always chicken out and use a fork because whisks are so annoying to clean. Now, you better believe I will be using a whisk for everything. My final verdict? I'm sold.