Eastman, Carbon, HP & others are among those advancing the additive manufacturing sector

Innovation is taking many forms in the 3D printing industry. Companies are furiously working to develop new materials and processes that leverage the amazing capabilities of this technology.

A few years ago, the hype around 3D printing became overheated, with promises of it triggering a new industrial revolution, and obsoleting many established manufacturing practices, such as injection molding. Those headlines got out ahead of reality, since traditional 3D printing still was hampered by key shortcomings, including a shortage of viable material choices, slow production speeds, and inevitable tradeoffs between functionality and aesthetics.

Long associated with rapid prototyping, 3D printing -- with the help of ongoing technological advances -- has now moved into the realm of direct part manufacture, especially in sectors such as aerospace, medical, dental and automotive. In key applications this has allowed practitioners to skip the expensive tooling process altogether, and go straight to low-volume, commercial part production.

That helped to spawn the term "additive manufacturing" (AM) -- as it stresses the "manufacturing" aspect, and implies the production of commercial parts, and not just prototypes.

"I won't say it's going to replace injection molding or anything," says Josh Davis, an engineering technician at Eastman Chemical Co. in Kingsport, Tenn., "but it's going to put a new twist on mass production." There will be much more customization for individual consumers, he predicts, with "individuality" becoming more of a focus of future product manufacture.

Different companies are taking distinctly different paths to addressing the challenges facing the additive manufacturing industry. One Silicon Valley startup (Carbon) and another, long-established tech company (HP Inc.) are both working to accelerate the manufacturing process, among other performance aspects.

"HP and Carbon are the first two that showed real progress in 3D printing, as far as speed," notes Davis. 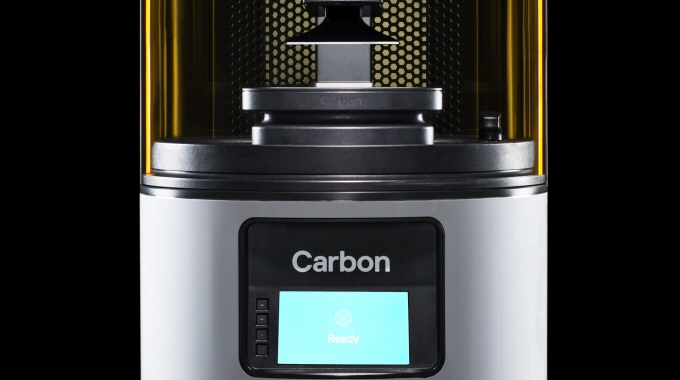 The new M1 printer from Carbon

Founded in 2013, Carbon has raised more than $140 million and earlier this year introduced its own additive manufacturing machine, the M1, which uses the firm's proprietary 3D printing technology, which it calls CLIP -- for Continuous Liquid Interface Production.

CLIP is based on a photochemical process that harnesses light and oxygen to eliminate the mechanical steps and the layers, to rapidly produce objects from a pool of resin. The process involves projecting light through an oxygen-permeable window into a reservoir of UV curable resin. By controlling the oxygen flux through the window, CLIP creates a "dead zone" — a thin layer of uncured resin between the window and the object. As a result, the build platform lifts continuously, rising from a resin bath, as the object is "grown."

Some question whether Carbon 3D's photopolymers will prove to be UV-stable enough for the resulting parts to remain durable, but -- quite literally -- only time will tell.

One person quite close to some of the current developments is Dana McCallum, who entered the plastics industry 6½ years ago, as marketing manager at Thogus Products, a family-owned plastics injection molding firm in Avon Lake, Ohio. Thogus soon added 3D printing capabilities to its portfolio. While there, McCallum enthusiastically embraced the technology, and in April 2014 was elected to the board of the Additive Manufacturing Users Group. In May 2015 she left to join Carbon 3D (now known simply as Carbon), and currently is head of production partnerships for the Redwood City, Calif.-based firm.

In a recent interview, McCallum said, "I don't think [additive manufacturing] will replace injection molding, by any means, in the next five to 10 years, but I do know that there are more and more applications switching from injection molding and urethane casting to CLIP. … Our goal is not prototyping anymore, it's [mass] production." Carbon claims that CLIP can manufacture parts from 25 to 100 times faster than traditional 3D printing processes.

Taking another approach, HP Inc. -- which in November 2015 was spun out of the former computer and printer giant Hewlett Packard -- earlier this year also introduced another potentially disruptive process, which it calls Multi Jet Fusion technology. HP plans initially to build parts using production thermoplastic materials and then eventually, perhaps, with ceramics and metals. With the high number of nozzles per inch for its Thermal Inkjet arrays, the firm's proprietary synchronous architecture is capable of printing more than 30 million drops per second across each inch of the working area.

In addition to limitations on production speeds and on the size of parts that can be made with additive manufacturing, another major hurdle has been the small number of suitable materials available for the process. This is where Eastman and others have entered the fray, pushing the envelope when it comes to developing resins for use as 3D printing filaments in longer-established processes such as fused deposition modeling (FDM) from Stratasys Inc. or stereolithography (SLA) and selective laser sintering (SLS) from 3D Systems Inc. 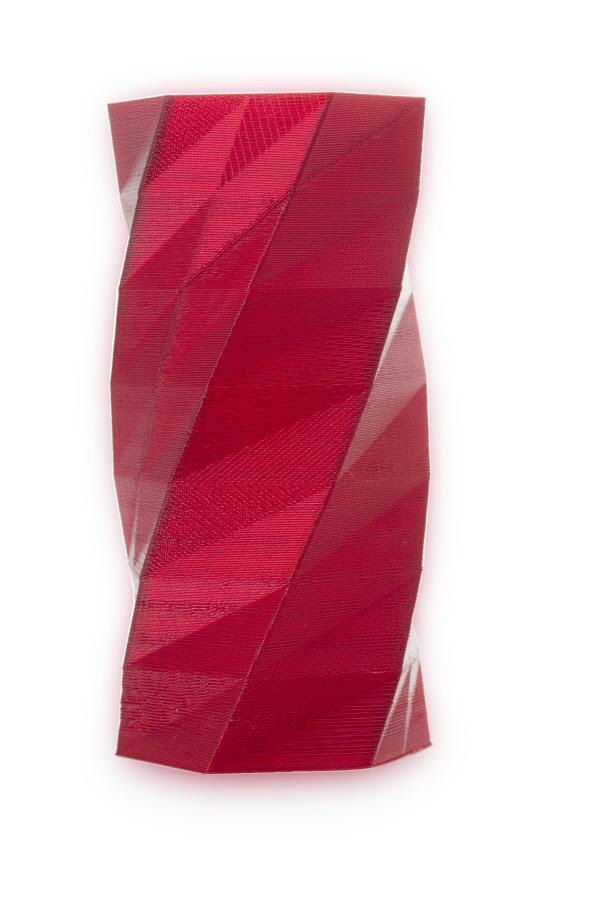 Davis explained how Eastman identified this market need and decided to specifically engineer copolyester polymers for additive manufacturing. The result, in 2014, was the introduction of its Amphora™ 3D Polymer AM1800, a low-odor, styrene-free material that could be used to produce very strong parts. That proved to be the first in a series of resins that now make up the custom-engineered Amphora portfolio, he said. 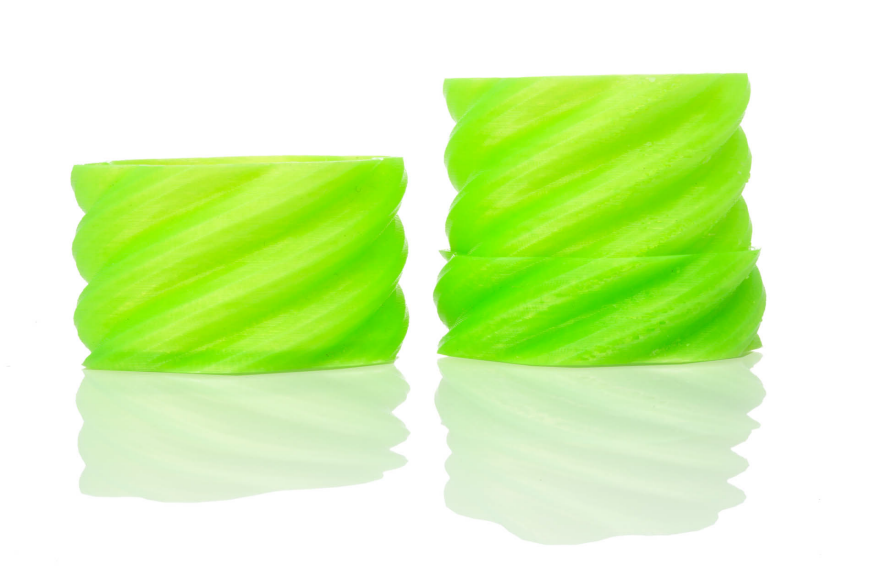 Next up, launched in November 2015, was Amphora AM3300, which offers higher heat resistance than the polylactic acid (PLA) bioresin being used in some 3D printing materials, while also providing a wider processing temperature range than AM1800. 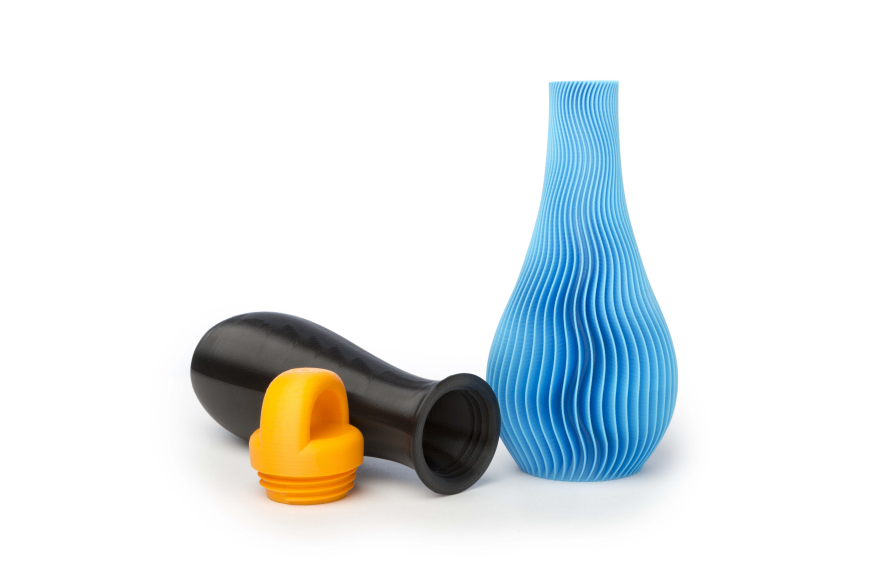 Eastman then introduced Amphora HT5300, which aims to replace ABS-based filaments in many applications, and is ideally suited for advanced 3D printing users, particularly those who need their creations to be durable, dimensionally stable, tough, and have high temperature resistance. 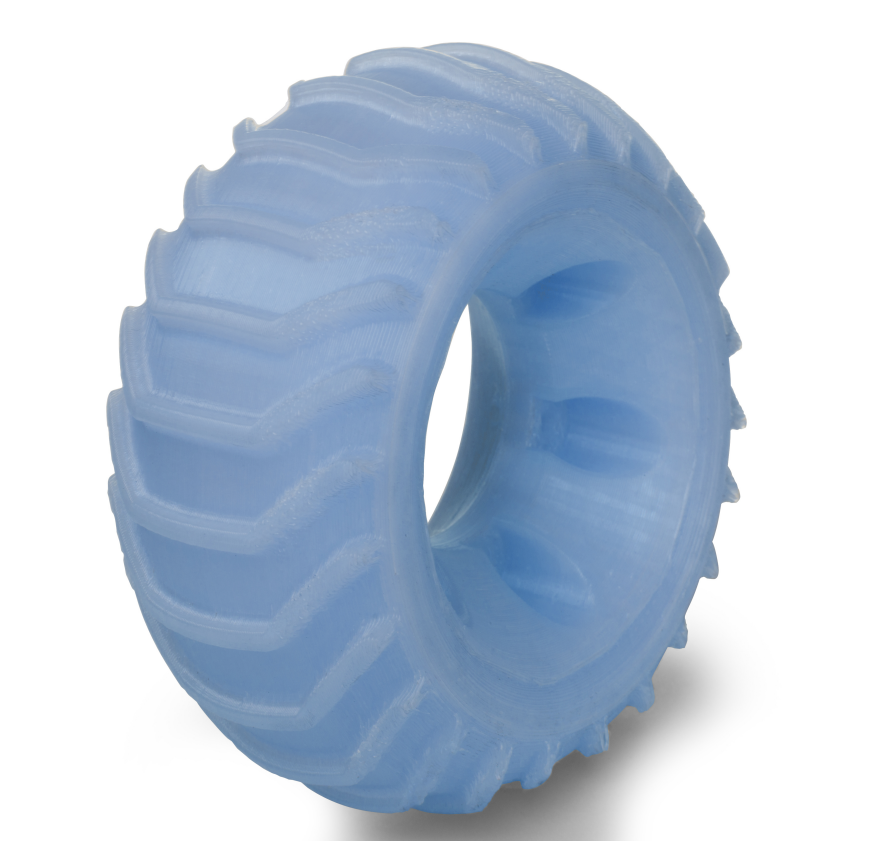 Then, just a few weeks ago, Eastman rolled out Amphora FL6000, a flexible material that Davis calls the first autoclavable flexible copolymer designed for 3D printing applications targeting pro-sumers. All the resins in the Amphora portfolio are low-odor, which gives them a distinct advantage of over ABS-based resins, whose off-gassing can make them undesirable to use indoors. And Amphora also complies with certain U.S. Food and Drug Administration regulations for food-contact applications.

"We've really only just scratched the surface in terms of applications with additive [manufacturing] today," said McCallum. "I think we're going to find even more applications with aerospace, automotive and especially medical" in the coming years.

Learn more about Amphora and the ways that #MaterialsMatter at innovationlab.eastman.com.