Ever had a butter dish that didn't fit your butter? Not to put too fine a point on it, but it might be a territorial thing. East coast butter sticks are long and thin and West coast sticks are thick and stout. They each clock in at 4oz., but the dimensional difference is real and noticeable. Beyond the obvious fact that east coasters are tall and neurotic while the left coast leans thick and athletic, there's a slightly silly reason why. 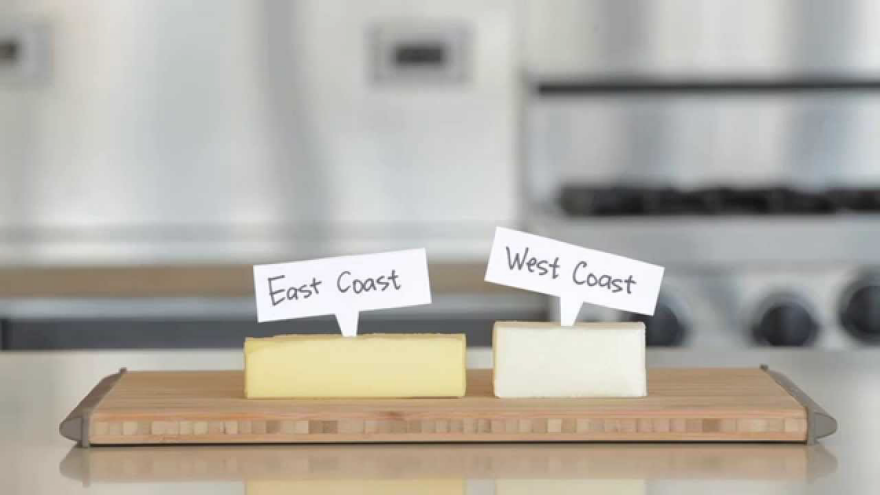 At the turn of the 20th century, before our country had gone fully packaging bonkers, a very simple invention changed how we visualize and buy a lot of our food. It was created by designer, Frank Peters, and first showed up in his packaging for Uneeda brand crackers back in the 1880s. The game changing "Peters Package" technology was the idea of wrapping a food in a sealed container, and then putting that container inside another cardboard carton. Sounds obvious now, but it was revolutionary. Suddenly, freshness lasted longer, delicate foods could be stacked and food portions became regularized. 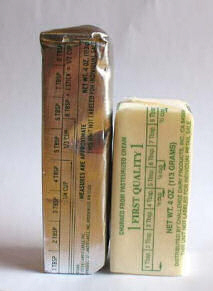 Butter had previously been distributed in large wooden tubs, portioned off and sold to the customer in one pound lumps, wrapped in wet cheesecloth. Yum! A huge butter lump may have had its benefits (I bet it would be a real game changer in snowball fights), but after a Louisiana restaurant magnate asked his distributor to Peters package his butter, the idea caught on like wildfire. A package of four quarter-pound sticks became the norm as the public became endeared with the cleaner and more easily measured units.

By the middle of the 20th century, the leftward side of the country was lagging behind national average on dairy byproduct production. The western market was booming to the point where there was hardly any milk left for cheese and butter after drinkable, pourable milk was portioned out. Maybe it was all our surfing, hiking and fad dieting that drove us to drink up all our milk, but dairy production was hurting. By the '60s, the state of California had stepped up its production aggressively. Its far newer machinery differed in several ways to the older tech, resulting in "butter printers" that made a shorter and stouter sticks. As the state acquired a majority stake in the butter scene, the thicker sticks became standard west of the Rocky Mountains. 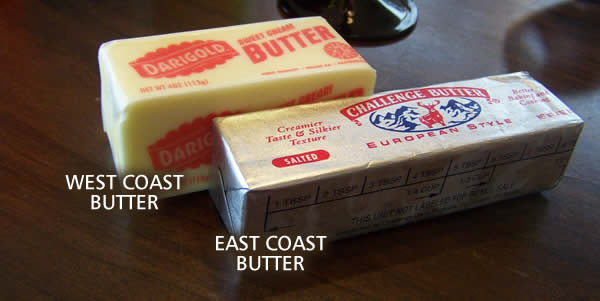 Despite zero functional differences, the regional size divide remains today thanks to tradition, and some national manufacturers produce both sizes to meet both markets' expectations. The eastern style sticks are known as "Elgins," likely after Elgin Machine Co., the manufacturer behind the majority of butter processing equipment in early US, who also—naturally—specialized in watchmaking tools. And out west? We get the cute if less appetizing "West coast stubbies."