Which companies are making the biggest efforts in sustainability, and how?

Sustainability within a corporate context can often conflict with traditional business models, making it harder to incorporate on a large-scale basis. On what grounds, other than moral obligation, would a company create a sustainable product or establish expensive recycling systems when their whole MO is getting people to consume?

Contrary to this conundrum in the design and manufacturing world, efforts to better the world in a production context do still exist. Recently in the Core77 discussion boards, this became a topic of conversation after a well-intentioned yet slightly misinformed student proposed a project where he wants to create brick building materials from e-waste. Regular contributor Cyberdemon aptly pointed out the problems with this concept:

"This is an ambitious - but frankly inappropriate student project - students are not exposed to nearly the level of complexity involved in addressing a problem such as this (one that the entire sustainability industry is focused on changing). The problem with this as a concept is you need to spend a few minutes dissecting all of the pieces that can exist in "e-waste"[...]

A piece of the sustainability puzzle that is usually misunderstood is the energy required to make something, and then recycle it back. Recycling material such as gold is currently something that happens actively, but the process of doing it usually leads to the release of toxic gasses and chemicals[...]

Grinding up toxic materials, and mixing them together with a toxic epoxy would create a material that would still cost more money, and require more energy than creating a standard brick, cinderblock, or other finished product."

This realization reveals that in order to deal with e-waste correctly, it usually takes expensive systems that could probably only be backed by federal or corporate institutions. In an interesting dialogue within the Core77 discussion boards, moderator yo brings up some interesting reference material in a board topic related to sustainable student design work. yo writes,

"Take a look at what Nike does with their "Re-Grind" program. Also look into "Micro-Plank" flooring made from milled scraps from the furniture industry. There are lots of opportunities for waste and excess materials that are not hazardous to students."

This reference to different companies making an effort gave us the idea of asking you—what are some great examples of corporations working to reduce waste and create sustainable systems?

To get you inspired, we've dug up a few different sustainable examples within the design industry. 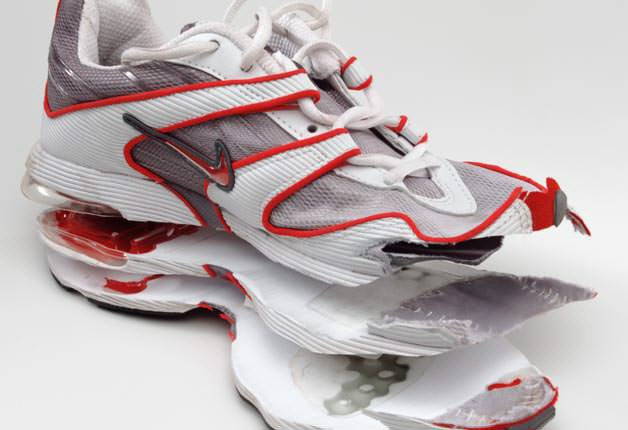 Nike Grind is one of the early examples of a truly cohesive established recycling system. Started in 1993, the program was created as a way to "eliminate waste and close the loop on Nike's product lifecycle".

Revealed earlier this year, Apple's Liam robot takes apart recycled iPhones so waste material can be reused for other products in the future. A potential game-changer in the fight against the accumulation of toxic e-waste around the world, it's still debatable what kind of impact this technology could have. At present, Liam is only able to deconstruct about 1.2 million iPhones each year (a number not even close to mirroring even 1% of tech gadget waste disposed annually), but still a technology worth keeping an eye on.

In September of this year, MUJI addressed the issue within fashion of energy-sucking material production through their Reclaimed Wool collection. Teaming with designer Reiki Sudo, they revived a 100 year old Japanese process that restores Japanese wool from vintage clothing into usable wool thread. Admittedly a niche effort, it does speak to a need for textile producers to address their culpability in corporate energy consumption.

What companies do you think are making radical efforts to establish truly sustainable systems? Share your discoveries and thoughts in the comment feed below or on the original discussion board!