From the inventor of the all-titanium hammer—a system for quickly swapping steel heads on wood and titanium handles.

Even the most extreme tool nuts can be forgiven for not having heard of Mark Martinez; I'd never heard of the guy until I was introduced to him a few weeks back at The World of Concrete in Las Vegas. A carpenter by trade, Martinez invented the solid titanium framing hammer in the late 1990s and produced it under the Stiletto Tools label until the brand was acquired by Milwaukee.

That hammer was significant not just for its use of titanium, but for beginning the trend towards lighter hammers—with framing models now as light as 12 or 14 ounces. The idea took awhile to catch on with carpenters because it was completely at odds with the traditional rule of thumb referred to in a Core77 story about Estwing's new steel/aluminum hammer:

Traditionally framers used 22- to 28-ounce hammers to produce the requisite driving power, and paid the price with repetitive motion injuries to their arms and shoulders. The current thinking is that lighter is more ergonomic, which is where E=1/2MV² comes in. In classic mechanics, kinetic energy (which for hammers equates to driving force) for non-rotating objects is equal to 1/2 mass (the weight of the head) times velocity (speed of the swing) squared. Simply put, swing faster and you can generate the same nail driving force with a lighter hammer.

Physics are just part of it; the other part has to do with materials. According to Martinez, titanium absorbs shock as well and won't break when used for a handle. But it can't take a beating, which is why the Martinez Tool Company makes steel-head hammers with wood or titanium handles. 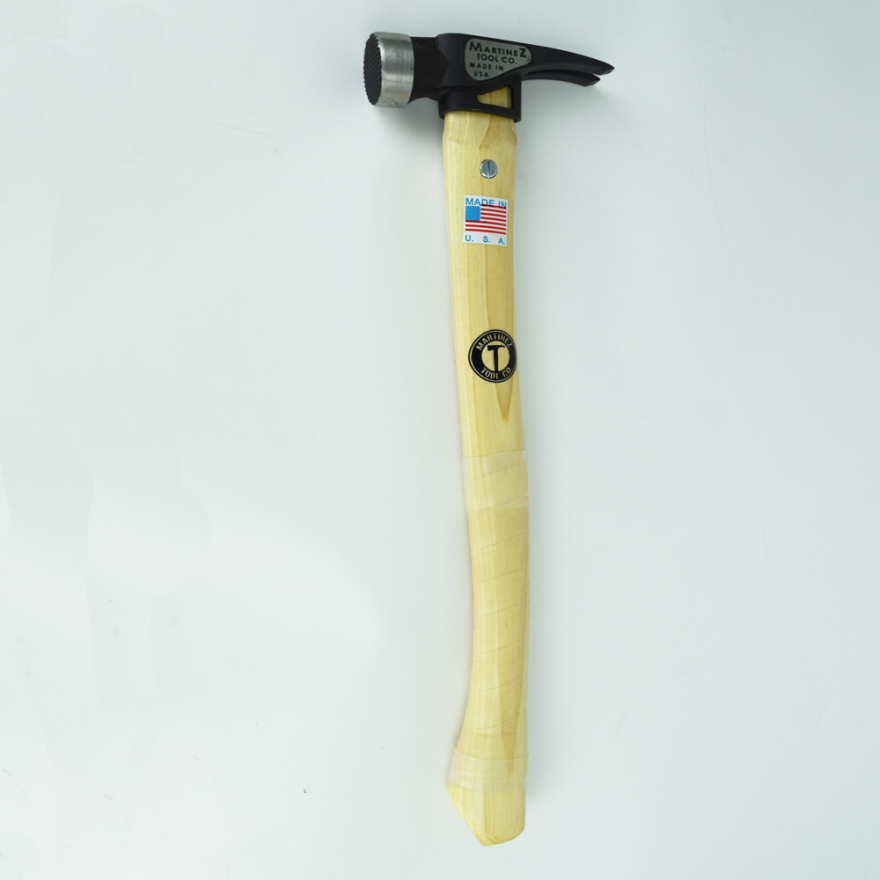 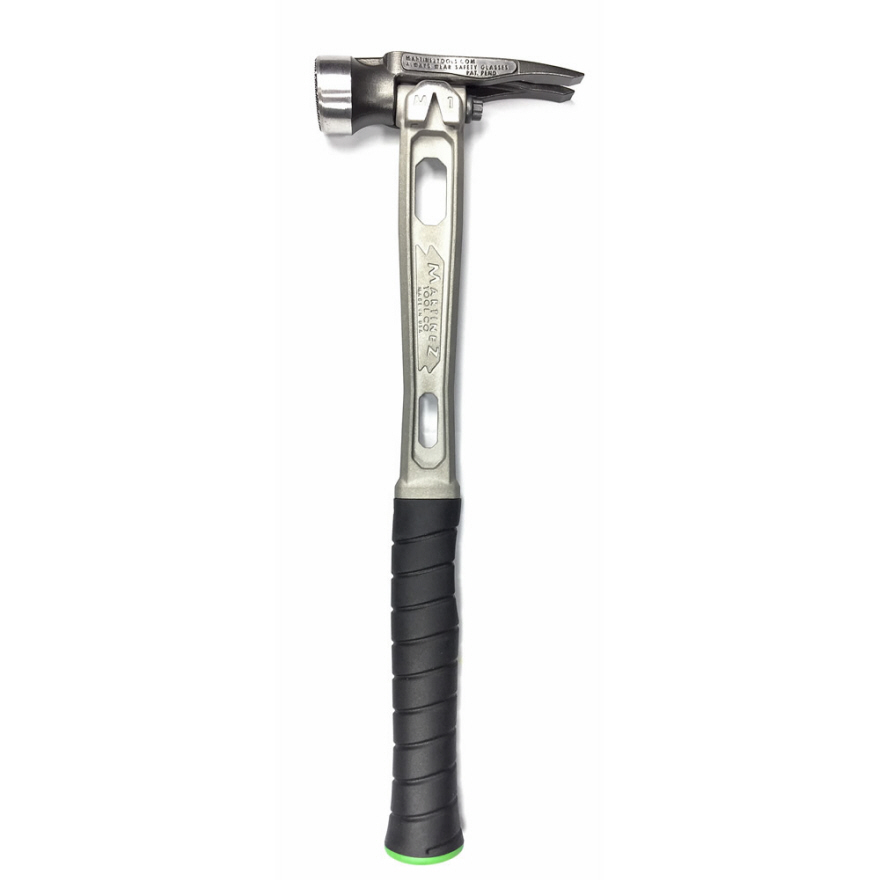 Steel is harder than titanium; a steel face stands up better to pounding nails and steel claws are less likely to break when used for prying or chopping (as is done during demolition work). And steel is heavier than titanium, so using it for the head puts the weight where it needs to be.

The heads on Martinez hammers are easily detached from the handles, allowing carpenters to use the same head with straight and axe-style wooden handles or the same titanium handle with smooth- and mill-faced heads. If something breaks or becomes worn it can be replaced in the field—including the rubber grips on titanium handles. 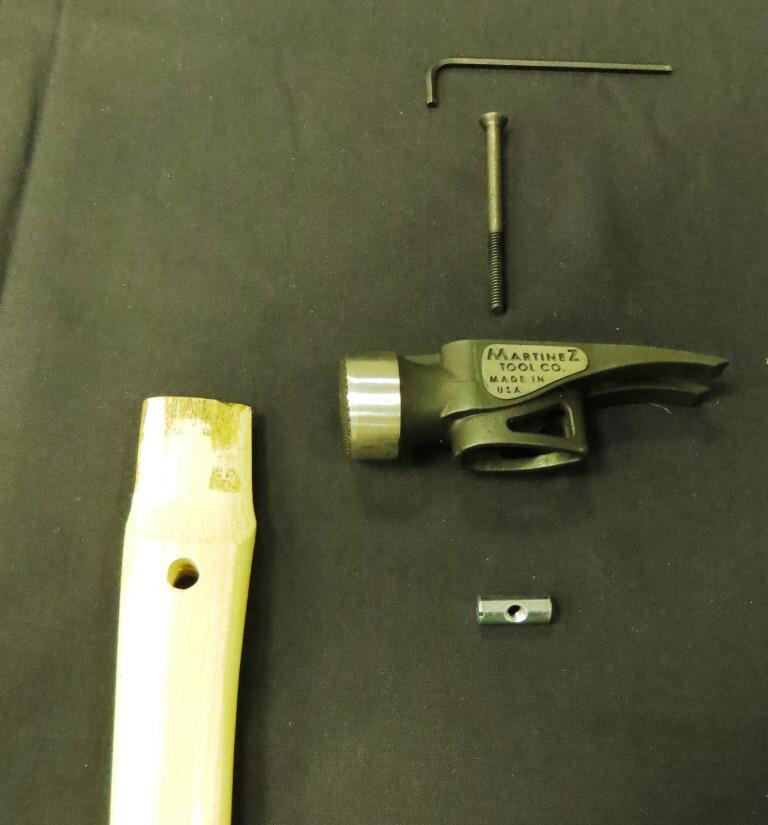 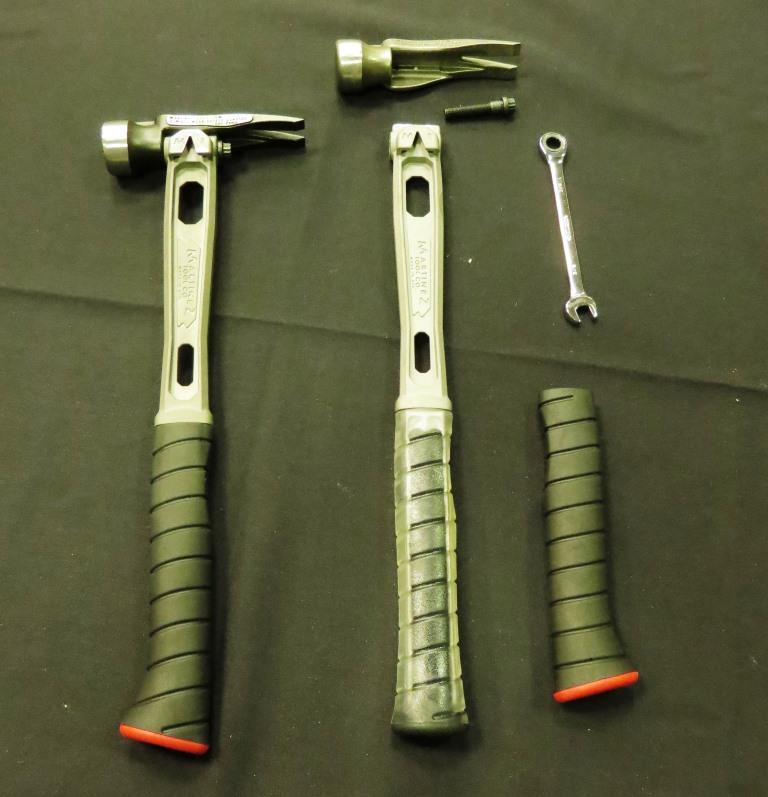 On wood handle models, the head is held in place with a hardened screw that extends into the handle and threads through a captured metal piece.

On titanium handle models, the head is friction fit over wings on the handle and held in place by a bolt.

Martinez hammers are a premium product aimed at professional users, and given their price ($75 wood; $199 titanium) are not the kind of tool you keep in the junk drawer in the kitchen. They are available with milled or smooth faces and a ball peen head is said to be in the works.