Editor's Note: For those unfamiliar with the functional differences of using different sorts of fasteners, you may want to read "Why You Should Use Nails, Not Screws" for some background.

Up until the mid-19th Century, all nails were either heated in a forge and then shaped, or cut. "Cut" means each nail was sheared off of strip stock and upset at one end to form a head.

Both of those styles of nails began to disappear during the late 19th century as cheaper nails made from steel wire took over. That might have been better for the manufacturer, but it wasn't necessarily better for the user. That's because cut nails (or forged nails for that matter) grip better than wire nails. Here I'll explain why:

1. When you bang a nail in, you're push the fibers of wood down. So in order for the nail to pop out it has to overcome the force of thousands of wood fibers acting like little barbs that grip the nail (see diagram below). Wire nails are round and only taper at the tip, so the wood fibers along the shaft of the nail are only bent a little. But since cut nails are tapered, as the nail goes deeper more and more wood is bent away with increasing force, resisting pullout. 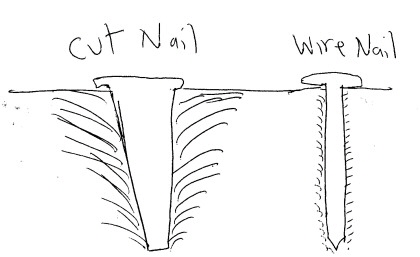 2. More wedging action all around also mean more forces that can cause a split in the surrounding wood, which is obviously undesirable. When you hammer a wire nail in, the pointed tip wedges the wood in all directions. A large wire nail will have more force holding it in than a small wire nail, but also more force trying to split the wood. On the other hand, cut nails are tapered, but only in one dimension; so when installed properly—with the wedge parallel to the grain of the wood—the taper of the nail is with the grain so it doesn't force a split. And the parallel sides of the nail won't cause a wedging action that would split the wood. So, for a given size and length of nail, a cut nail gives you a lot more holding power with less chance of splitting.

3. The wedging action of a wire nail is fixed by the diameter of the point. Far more wedging action can be achieved in the continuous increasing taper of a cut nail. Some cut nails (boat nails) have a wider section in the middle, so that the wood at the top of the nail can swell back around the nail for even more strength.

4. Since it's cylindrical, a wire nail can easily twist inside the wood. The square section of a cut nail resists twisting, and this naturally helps keep the nailed structure stable.

5. Because cut nails are tapered, the top workpiece being nailed down is held down by the taper of the nail and you don't need much of a nail head. This allows for a much smaller nail head, which the builder can easily set flush with the wood. With a wire nail, which has less gripping force, the enlarged head is needed to keep the joint from separating—and leaves a more visible result.

6. While not related to holding power, the tops of cut brad nails are smooth and don't deflect away from the hammer blow as much as the pinched top of a wire brad. So the cut nail is more easily and reliably nailed in. 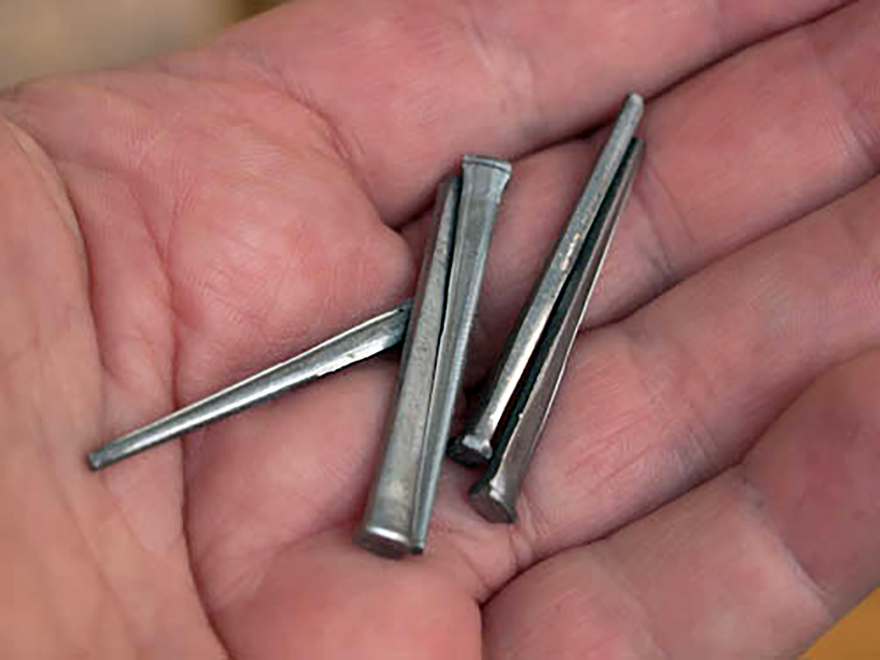 Where do you get cut nails? Funny you should ask. You can click over to our nail salon for cut nails in small or large quantities.

We stock a large selection of cut nails made in the USA by Tremont Nail, the country's oldest manufacturer of cut nails. (They've been making them ever since they were invented in the early 19th century.) We repack the nails into small, convenient resealable bags. We understand that you don't always need a huge quantity of any specific type of nails so our bag sizes range from 1/8 of a pound for small finishing nails, to typically a 1/2 pound for everything else. Some of the large nails are sold by the pound. If you order 4 or more packages of any mix of nails you automatically get 10% off.

Whether or not you buy from us, I hope that this has helped you better understand the nature of cut nails and how they might apply to one of your projects.