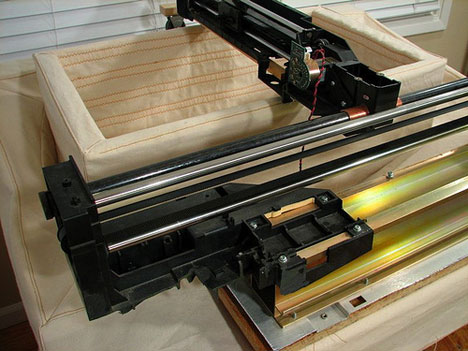 It's a scenario familiar to most design freelancers: you're working in some company's office, hoping they'll go home at six and leave you behind to work on the project--so you can print your own stuff out on their kick-ass printer or high-end plotter, making use of equipment you could never afford on your own.

Alas, the few times your correspondent was lucky enough to work in a firm with an RP machine, the coveted device was never left unattended, so dreams of making resin army men or self-designed eyeglass frames were never realized.

But now there's hope, without having to milk a client! The nutters over at EvilMadScientist have been working on a "home-built, DIY, CNC, 3D printer" that all of us could theoretically build for under 500 bones. The printing medium? Granulated sugar, in two- to five-millimeter "pixels." It's less expensive than resin, and when you screw up the first three army men, you can just drop the little buggers in your coffee.

The fellas over at EMS hope to debut their creation sometime in May. Click here to read more.