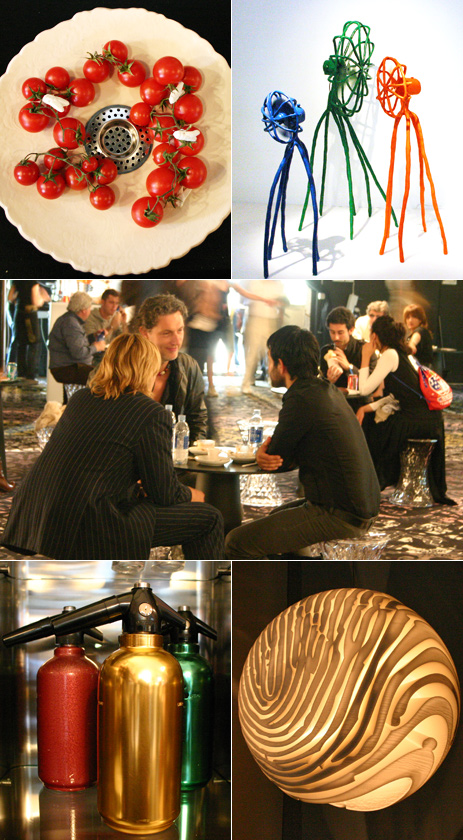 The week winds down in Milan. Off-site venues were quiet as everyone recuperated from last night's festivities. Is that Marcel Wanders we catch having an afternoon pick-me-up?!

TuttoBeNe, the collective of designers from (or based in) Belgium or The Netherlands, took over a former car wash/market outpost in Zona Tortona and filled it to the brim with their wares. Warm sun drenched pieces such as Joana Meroz's clever "Lace Plate with Drain", while further down the road Maarten Baas showed his new collection called "Sculpt." Reminiscent of Gumby-gone-furniture, the most successful pieces were his playful upright fans.Across town, Claudio Turci's a15 gallery featured a collection of "Objects-of-Vices." The result of years of research and investigation, the ensemble showcased everything from cocktail shakers to Playboy magazines, proving once again that objects of desire remain timeless.

MGX by Materialise took rapid manufacturing to another level with Dan Yeffet's lampshade. Using his own fingerprint as a pattern, this glowing orb symbolizes the sharing, and inevitable loss, of personal identity -- an interesting commentary in the midst of mass manufacturing.